Cash-strapped fans of Panasonic plasma TVs should probably sit down before we write our next words… All settled? OK. Then here we go: Today we are testing a 50in Panasonic plasma TV that can be yours for just £750. Yes, you read that right: £750. So the P50UT50 could potentially be not only the bargain of the year but also a heaven-sent answer to all your budget home cinema prayers.

With the design wasteland of most of Panasonic’s pre-2012 TVs still fresh in our minds, we’re quite surprised to find that the P50UT50 is by no means ugly despite its extreme affordability. Sure, it doesn’t have any truck with the extremely slim bezels so fashionable these days; its frame is well over an inch across on the top and two side edges, and extends to more like 2in along the bottom edge. 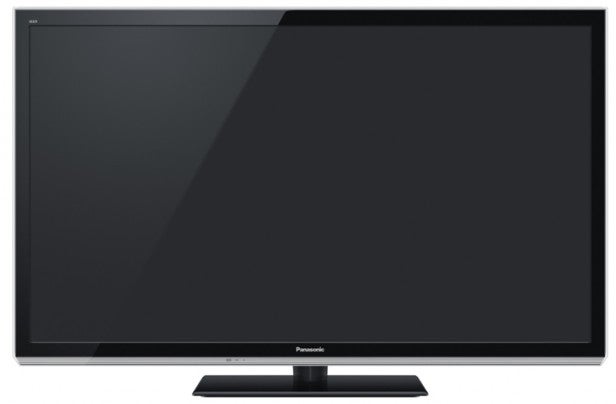 But this black bezel is certainly attractive, thanks to the combination of an extremely glossy finish and the way the see-through ‘top sheet’ is allowed to extend a few millimetres beyond the edge of the main frame. The application of an angled metallic silver strip along the underside of the bottom edge introduces a welcome contrast too.

Connection limitations
You get a bit of a budget-based reality check, though, when you investigate its connections. For as well as only providing two HDMIs when most TVs these days provide at least three, the P50UT50 also doesn’t carry built-in Wi-Fi.

Before we get too despondent about this, though, the two HDMIs are built to the v1.4 standard on account of the fact that, impressively for its money, the P50UT50 carries active 3D playback. You don’t get any 3D glasses included for free, but even being ‘3D Ready’ counts as a bonus on a £750 50in plasma TV.

DLNA support
As for the missing Wi-Fi, you can add Wi-Fi by buying one of Panasonic’s optional USB Wi-Fi dongles. Plus, of course, you’ve got a LAN port to give you instant, hardwired access to the P50UT50’s network features – features which include, we’re very pleased to say, not only access to video, music and photo files on DLNA-ready devices but also Panasonic’s Viera Connect online service. Yes, despite its cheapness, the P50UT50 is a bona fide ‘smart TV’. 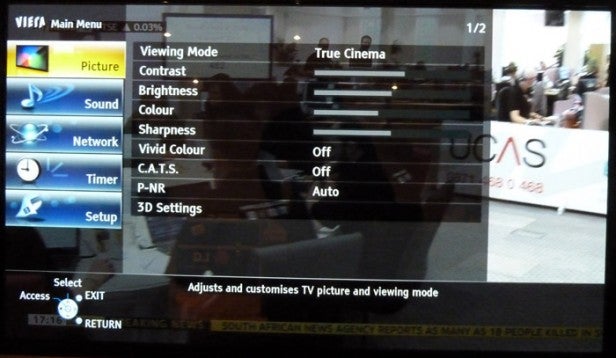 It extends its multimedia credentials, moreover, by carrying an SD card slot and a pair of USB ports through which you can play AV multimedia files held on USB/SD storage devices.

Please note, though, that the TV doesn’t carry a D-Sub PC input, which puts even more strain on those two HDMIs.

On the downside, the P50UT50 doesn’t get the same cutting-edge Neo Plasma panel design that kicks in on the ST50 (and higher) models in Panasonic’s 2012 TV range. This is a significant downgrade for the UT50 model, and is surely the main reason that the P50UT50 is so affordable. Naturally we’ll be taking a close look at how much of a difference to picture quality the P50UT50’s use of a lower-grade panel makes.

Energy efficiency
As with all of Panasonic’s plasma TVs this year, the P50UT50 has secured a C grading on the new energy efficiency scale – which obviously doesn’t look very impressive given that most LCD TVs (from the big brands, at least) are bagging As. But we have little doubt that there are plenty of AV enthusiasts out there who would put plasma picture quality above eco concerns when considering their next TV purchase.

Exploring the Viera Connect service reveals that it’s exactly the same system found on Panasonic’s higher-end 2012 TVs. You thus get the same highlights of YouTube, the BBC iPlayer, Netflix, Eurosport, Twitter, Facebook, BBC News, Skype, Acetrax and Fetch TV, plus a Web browser. Along with a ‘b-list’ that includes a selection of information and gaming apps – two of which (Asphalt 5 and Let’s Golf 2) wouldn’t look out of place on a games console.

Solid Online Offering
Content levels still lag some way behind those found on the latest online platforms of Samsung and LG, but the general quality of Panasonic’s content is quite high, and its infrastructure is robust and stable. This is particularly true of the Viera Marketplace where you can buy apps and even hardware accessories via the most fully developed purchasing system in the UK smart TV world.

Panasonic’s penchant for extremely large icons on its main app exploration screen continues to rankle a bit, requiring more delving through multiple layers of icons than we’d like. But otherwise Viera Connect has much to commend it. 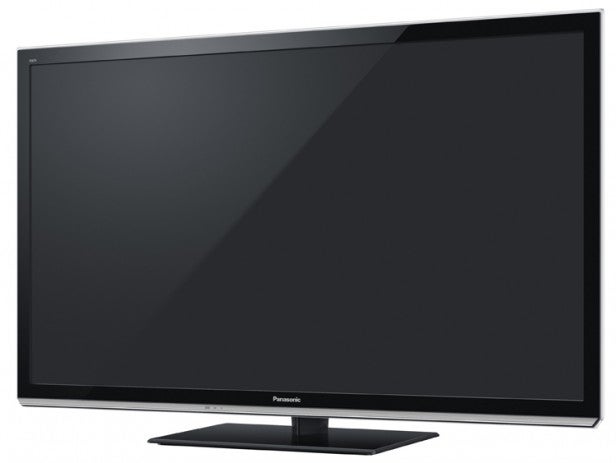 In action the P50UT50 dazzles and slightly disappoints all at the same time. Or to put it another way, while it proves to be a million miles better than most budget rivals when watched with the right material in the right conditions, it also falls significantly short of the all-round quality of Panasonic’s ST50 models.

Black Level Response
The key to explaining the previous paragraph lies, as ever with Panasonic plasmas, with the P50UT50’s black level response. Watching dark movie scenes on Blu-ray on the P50UT50 with the lights dimmed or, ideally, completely switched off is every bit as mesmerising an experience as we would have hoped. The depths of black colour the screen hits are truly profound. Not quite as deep as those of the ST50 series and above, but miles ahead of anything you’ll get from any other budget big-screen TV right now.

Making this even more impressive is the way plasmas’s self-emissive nature means the deep, natural blacks are achieved without a) the overall brightness of the image having to be reduced and b) shadow detailing having to be ‘crushed’ out of the image. There really is no overstating how important these two factors are to making dark scenes look natural and involving.

Colours
Also abundantly apparent while watching films with the lights down is how well balanced and natural colour tones look. There’s a little more striping in blends and generally less colour nuancing than you get with Panasonic’s higher-end plasmas, but overall the colour results are still impressively cinematic. 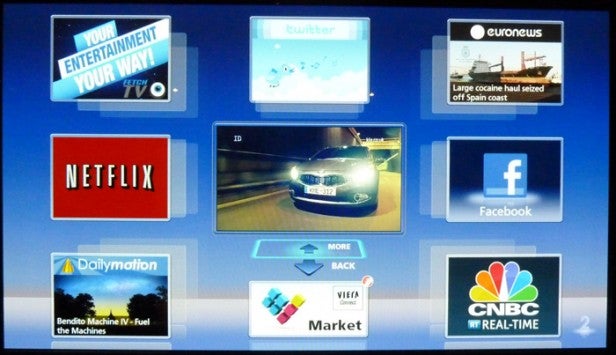 HD sources look pleasingly sharp considering how cheap the P50UT50 is, making full use of both the screen’s full HD resolution and the fact that plasma by its nature doesn’t blur motion as much as LCD TVs do. There isn’t the same sumptuous precision and colour nuancing that you get with Panasonic’s GT50 and especially VT50 models, but it’s still mighty fine for £750.

There’s a touch more judder in images than you see on the GT50 and VT50 models too, but it is actually considerably reduced from anything seen on previous Panasonic plasma generations, and to our mind is much less detrimental to images than the sort of resolution lost over moving objects with many LCD TVs.

Shifting to standard definition pictures, picture quality does take a slightly bigger hit than we would ideally like, since as well as looking softer pictures seem to lose a little colour accuracy, becoming slightly more muted and short of nuance. They’re still eminently watchable, though, especially as the slightly soft tone does at least tend to keep a lid on potentially distracting source noise.

Brightness Hurts
Now we get to the not quite so good news. First, the P50UT50’s images don’t hold up nearly as well when watched in relatively bright conditions as those of the ST50 and above models. Presumably because the light filtering in the P50UT50’s panel isn’t as accomplished as the various filters found across the ST50, GT50 and VT50 ranges, the plasma cells are more affected by ambient light, resulting in black levels taking a notable hit (and very dark scenes taking on a slightly yellowish hue). Pictures also generally start to look a bit muted versus what you’d expect to see in the same light room conditions from a strong LCD TV. 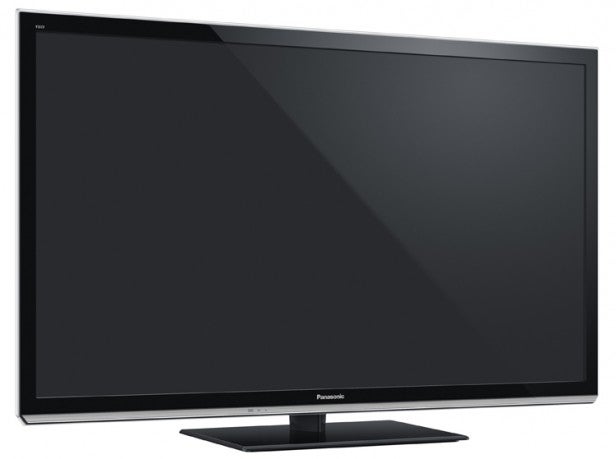 Also, more surprisingly, the P50UT50 proves to be only a fair to middling performer with 3D. Generally we’ve found plasma technology – or more specifically, Panasonic’s plasma technology – to deliver particularly good results with the active 3D format, on account of it suffering much less with crosstalk ghosting noise. But as with (to a lesser extent) the ST50 models, the P50UT50 does display clear evidence of crosstalk  over the edges of objects in the mid to far distance, especially if they appear against dark backgrounds.

3D
The 3D images of the P50UT50 also look a little dull thanks to the dimming effect of the active 3D glasses, failing to hit the same levels of vibrancy experienced with the ST50, GT50 and VT50 models.

It should be added, though, that 3D images still look detailed, HD and immersive, especially as motion is handled unusually well. But if you’re a 3D fan, there’s enough wrong with the P50UT50’s 3D efforts to make stepping all the way up to the GT50 or VT50 models very much worth considering.

A final negative is the appearance of a little colour break-up over skin tones during swift camera pans – something seen on many of Panasonic’s plasma TVs over the years. 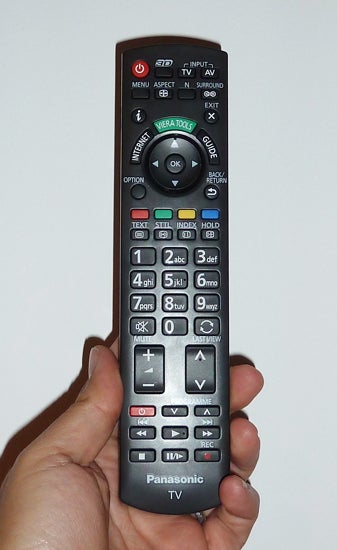 If you’re thinking of doubling up a P50UT50 as a gaming monitor, you’ll be pleased to hear that provided you select its Game preset, it measures only 38ms on our input lag tests – that’s a low enough figure to leave your ‘twitch’ gaming skills more or less unspoiled.

Finishing up with the P50UT50’s audio, it passes muster but not much more. Straightforward TV shows comprising mostly just chat and godawful jingles are fine, with enough richness in the mid-range and enough general clarity to make sure the dulcet tones of Jeremy Kyle don’t sound distorted or thin.

Feed the TV an action scene, though, and that definitely does sound thin, thanks to a lack of any real bass and insufficient power to let the mid-range open up to deliver that bit extra punch when it’s needed.

Verdict
If this were still 2011 the P50UT50 would have bagged a strong recommendation, thanks essentially to its ability to deliver the most cinematic experience we’ve had for less than £800. However, the advances made by Panasonic’s 2012 Neo Plasma models in terms of contrast, brightness and the ability to function well in a bright room do make the temptation to step up to at least the Panasonic ST50 models very hard to resist.

That said, if its £750 price really is all you can stretch too and you don’t mind keeping ambient light levels low when watching the set ‘in anger’, then the P50UT50 is a cracking cinematic budget option.