We’ve spent a good deal of very enjoyable time this year with Panasonic’s high-end plasma TVs. By which we mean any sets that use the brand’s latest NeoPlasma technology (anything from the ST50 series upwards).
But with most experts predicting dire economic straits for the Post Olympics world, it’s a sad fact that not everyone will be able to afford one of Panasonic’s NeoPlasma superstars. So it’s time we turned our sights a bit lower, to Panasonic’s entry-level X50 plasma range – as represented today by the 42in P42X50.

Design
The first thing to say about this TV is that we’ve found it selling online for just £365 – a remarkable price for a 42in Panasonic plasma. Inevitably, though, this price does come with some significant – albeit hardly unexpected – strings attached. For starters, the X50 series is the only one in Panasonic’s 2012 range that doesn’t carry any Smart functionality. So there’s no BBC iPlayer, no Acetrax, no Netflix, no Twitter and so on. 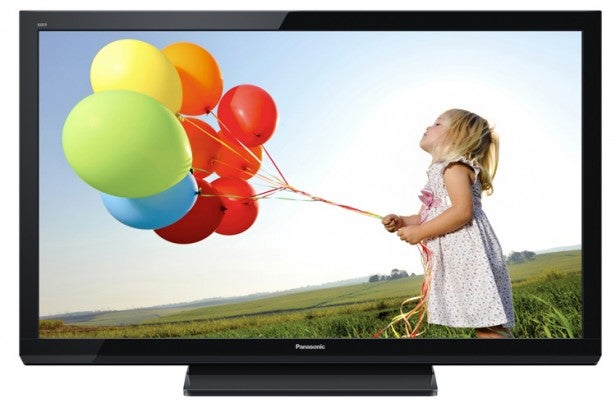 Also, it’s the only plasma range from Panasonic this year that doesn’t feature any 3D capabilities. And it’s additionally the only 42in TV in Panasonic’s 2012 plasma series that doesn’t boast a native full HD resolution. Instead you get 1024×768 – a blast from the past that uses a ‘stretched’ plasma cell design to convert the apparent 4:3 aspect ratio to the now-standard 16:9 shape.

Let’s be quite clear about all this, though. While we will undoubtedly miss some if not all of these features, especially the new NeoPlasma panel technology, even a feature-light Panasonic plasma has the potential to be a great TV, especially for cash-strapped movie fans.

Spec hunt
In looking for what the P42X50 does have in feature terms, it’s got Panasonic’s now fairly standard 600Hz sub-field driving for enhanced motion and colour reproduction. It also claims a spectacularly high (for its level of the market) contrast ratio of 3,500,000:1, despite not having any of Panasonic’s latest black filtering technology. What’s more, this contrast ratio is native, meaning that unlike the contrast ratio figures quoted for LCD TVs, the P42X50’s picture doesn’t require it to drastically reduce brightness levels when attempting to produce a convincing black level.

This has the potential to be hugely significant at the budget end of the market, where backlight inconsistencies and a general lack of black level depth are extremely common failings. 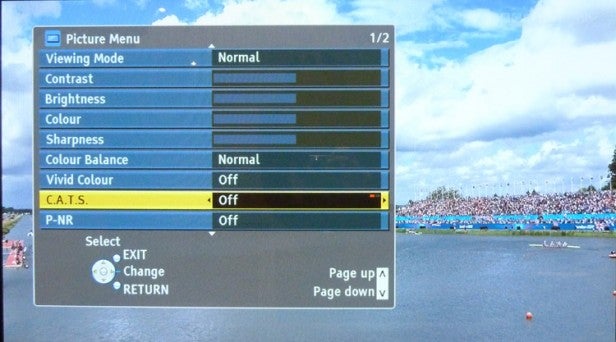 Our eye is also drawn on the P42X50’s specification sheet to a response time figure of just 0.001ms. This is vastly faster than the sort of response times you get with LCD TVs, where it’s still common for budget sets to measure 6-8ms. What this means in practical picture quality terms is that the P42X50 should suffer far less with resolution loss and smearing over moving objects.

Connections
Turning to the P42X50’s connections, they’re hit and miss. The biggest disappointment is the presence of just two HDMIs when even on a really cheap TV we’d ideally have liked to find at least three. Also unusual in this day and age is the lack of a D-Sub PC connection. But you do get both a USB port and an SD card slot capable of playing multimedia video, photo and music files of the following formats: AVCHD, SD-Video, MotionJPEG, MP4, DivX HD, WMV, MKV, AVI, MP3, AAC, WMA, and JPEG.

There’s a LAN port too, despite the lack of any Smart TV functionality. But it turns out that this does not give you connectivity with a DLNA PC; it’s just there as mandatory support for an integrated Freeview HD tuner. Oh well – maybe we should be grateful for £365 that the set even has an HD tuner!

It comes as no great surprise to find the P42X50’s onscreen menus containing precious few features of note. The only things of interest are a handful of handy themed picture presets, On/Off settings for Panasonic’s self-explanatory Vivid Colour system, a noise reduction system, and a couple of tools for combating plasma’s traditional problems with image retention.

Image retention is much less of a problem for most plasma TVs than it used to be, especially if you exercise a little caution with bright screen logos during the first 100 hours or so of a plasma’s life. But the provision of pixel orbiter and ‘screen wipe’ functions is still welcome.

Energy efficiency
One last specification to mention is that unexpectedly the P42X50 bags a B rating on the new energy efficiency scale, compared with the Cs attached to Panasonic’s latest NeoPlasma panels. We’d guess the lack of any 3D on the P42X50 is the main reason behind this power consumption difference. 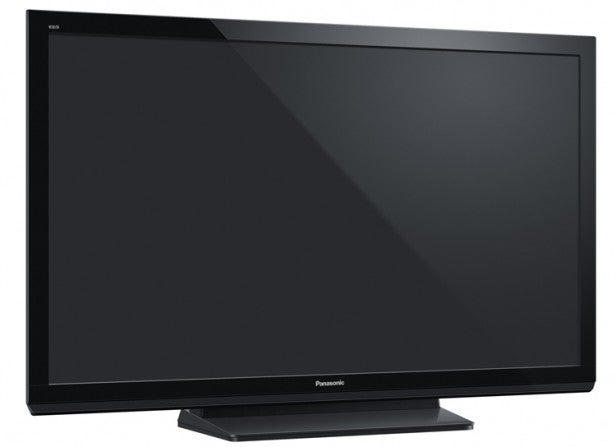 Firing the P42X50 into action first as a TV (as opposed to a ‘movie machine’), our first reaction to its performance is that it’s… pleasant. This, we realise, is hardly the sort of air-punching adjective we usually associate with a Panasonic plasma TV. But for a 42in plasma TV costing under £370, we’d argue that ‘pleasant’ is more than good enough!

Clear motion
Heading up the good stuff while watching a combination of the Olympics in HD and normal HD and standard def broadcasts is the image’s clarity. This is chiefly down to a level of motion clarity that frankly humiliates all affordable LCD-using rivals – and even some considerably less affordable ones!

HD pictures don’t look as spectacularly detailed as we’ve seen them elsewhere, but there’s never any doubt that you’re watching HD images. And there’s impressively little noise to worry about considering the TV is having to downscale full HD feeds to its native 1024×768 resolution. 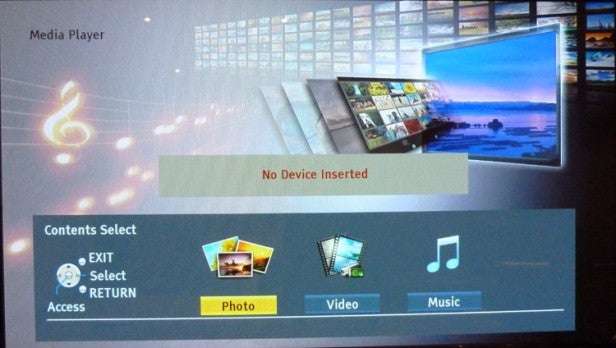 Colours also look impressively balanced and natural in tone, so long, at least, as you try to avoid the over-aggressive dynamic preset, which tends to make reds and greens look too dominant and ‘cartoony’.

Lack of brightness in light rooms
The issues with the P42X50’s pictures that stop us from raving about them kick off with their lack of brightness. They definitely look a bit muted versus most LCD TVs (and Panasonic’s own higher-level plasma models), a weakness heightened if you find yourself watching the set in a very light room. In fact, if you predominantly watch TV with lots of sunlight around, we’d go so far as to say that the P42X50 just isn’t the set for you.

Another issue somewhat connected to the first one is that colours look a touch short of dynamic range, and also don’t enjoy the extreme levels of tonal subtlety you get with Panasonic’s more powerful TVs. This can lead to reds looking rather orangey at times, too.

Finally, during fast horizontal camera pans you can sometimes see a little fizzing noise – though actually we’d say this isn’t as obvious as it is on the NeoPlasma models. 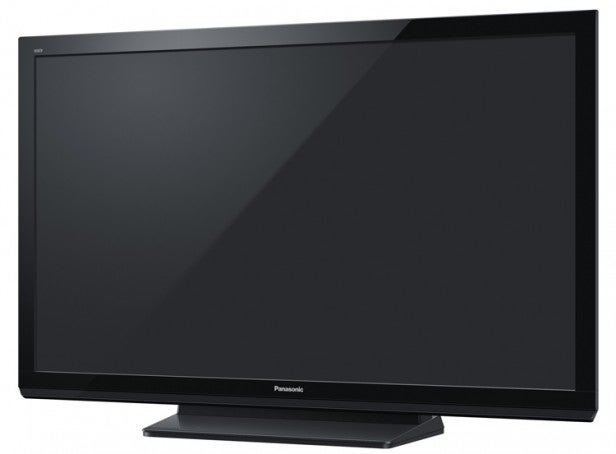 Black level strength
Shifting to watching films in a dark room, the P42X50 really comes into its own. The set’s black level strength versus most budget TVs really leaps to the fore, while the picture’s lack of brightness appears far less obvious.

Blu-ray feeds look detailed and crisp too, despite the screen not being full HD, and perhaps best of all the amount of shadow detail on show during dark scenes makes them look far more convincing and evenly balanced with bright scenes than you usually see with budget flat TVs.

With colours looking extremely natural in tone too for the most part, and motion looking miles better than it does on similarly priced rivals, it’s no stretch at all to declare the P42X50 far and away the best sub-£400 TV we’ve seen when it comes to our favourite pastime of watching films in cinematically darkened rooms.

Really the only complaint we could raise for the P42X50’s money is the occasional appearance of a little shimmering noise over some very narrow picture elements, such as the struts in a chair back, or the stripes in a shirt.

Sound
The P42X50 is hardly slim by modern TV standards, so we’d hoped it might use its bulk to produce a superior sound performance. However, while the speakers flatter to deceive by proving able to churn out quite a bit of raw volume and sounding decent enough with relatively quiet fare, during action scenes it becomes apparent that the volume comes along with some noticeable distortion when the going gets even remotely tough. In other words, you’re advised to try and partner the set with an external speaker system if you can, in order to do the movie-friendly pictures justice.

One final aspect of the P42X50’s performance to mention is its input lag. This was oddly inconsistent during our tests, shifting during multiple tests between an outstandingly low 7ms through the most common 34ms all the way up to an occasional disappointing 70ms. But the average figure of 32ms should keep gamers happy overall.

Verdict
While people looking for a casual TV to go into a usually bright living room environment might not feel entirely satisfied by the P42X50 due to its lack of brightness, it’s a film-lover’s dream, delivering those all-important movie elements of contrast and motion with a quality that you just cannot find anywhere else for anything like as little money.