During our recent review of the decent but flawed Panasonic L55DT65
LCD TV, which sits one step below the 55WT65, we commented that we
hoped the WT65 series might put the contrast problems we had with the
DT65 model right. And we have good reason for feeling optimistic in this
regard.

Also potentially significant is the Panasonic L55WT65’s much more potent motion
processing, which delivers a pseudo 3600Hz effect versus the ‘mere’
(though actually huge by the standards of the TV world at large) 1600Hz
of the DT65 range. Other differences between the WT65 and DT65 series are the WT65’s aforementioned built-in camera and more stunning design.

Where key similarities with the DT65 are concerned, there’s the WT65’s continued use of passive 3D versus the active system used on last year’s equivalent models; the endorsement of the Imaging Science Foundation along with the attendant high-level colour calibration systems such endorsements invariably require; and the use of IPS LED panels, with their wider viewing angle support.

With the DT65’s various issues with black level still firmly in our
thoughts, we couldn’t resist kicking off our tests of the Panasonic L55WT65 with a
selection of very dark sequences. And the results – after switching off
the extremely distracting illumination of the TV’s transparent bottom
edge! – were slightly better but still, sadly, flawed.

This flaw is an all-too-familiar one with Panasonic’s LCD TVs. Namely that Panasonic just isn’t as adept at controlling its edge LED lighting as some rival brands – most notably Sony. To explain…

With the set’s Adaptive Backlight Control active on our preferred Mid setting (more on this later), during any dark shots that have bright elements in them there’s a pretty strong likelihood that you’ll regularly become aware of distracting ‘stripes’ of extra light stretching right across dark parts of the picture in order to illuminate the bright object.

This backlight inconsistency/artefact is marginally at its most obvious if you’re using the local dimming engine, as this can cause quite localised ‘stripes’ of extra brightness around very light objects. But it’s pretty obvious at all times, really, with the Adaptive Backlight Control in play.

Also causing us to be distracted while watching dark scenes are some noticeable jumps in the overall brightness level of the whole image, as the adaptive backlight system tries to respond to changes in the incoming image content.

Further points here are that sometimes the set’s adaptive backlight system goes a bit too far, taking out a lot of shadow detail from the very darkest shots, and that the TV’s rather glossy screen is a little reflective of light objects and sources in your room. 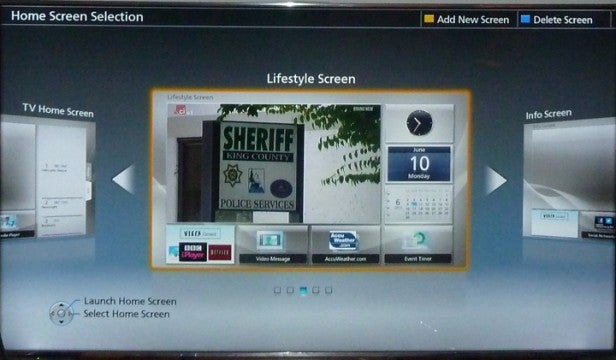 At this point, after making a pretty strong case against the L55WT65’s handling of dark scenes, we really must point out that the set is capable of some really pretty outstanding black level depths by LCD standards. It’s just that the experience of watching dark scenes while using the Adaptive Backlight Control isn’t as immersive as it would ideally be, despite the surprisingly excellent black depths the TV can plumb, because of the amount of time you become aware of the technical tricks the set is employing to deliver those excellent blacks.

At this point you may be wondering why we’re bothering with the Adaptive Backlight Control if it causes so much trouble. The thing is, we don’t really have a choice. For if you turn the feature off, or even set it to ‘low’ rather than ‘mid’, the picture’s black level response takes a huge hit, resulting in dark scenes looking far more washed out and greyed over than they should on a flagship TV.

In other words, as with the L55DT65 we tested recently, it seemed to us to be ultimately impossible to arrive at any combination of settings that produced a truly convincing contrast performance. The ability of the Panasonic L55WT65 to deliver its local dimming on a more, um, local level means that its potential for distraction is slightly less than that witnessed on the L55DT65, but you can still readily find better edge LED handling elsewhere in 2013’s TV world.

Used as the main TV for the review period
Tested for more than a week
Tested using industry calibrated tools, discs and with real world use
Tested with broadcast content (HD/SD), video streams and demo discs
Previous
Panasonic TX-L55WT65 Review Next
Performance and Conclusions Review