Turning to the Panasonic L55DT65’s picture technology, its big ‘thing’ is its
introduction of local edge LED dimming –  a feature missing from the ET60 range directly below it. This tech
individually adjusts the light levels of different segments of the edge LED
array to potentially deliver a much more rich contrast
performance than normal LED systems, though it can also lead to problems
with backlight ‘blocking’ as was the case in last year’s WT50 range.

The L55DT65 also offers a significant spec jump from the Panasonic L55ET60 in its motion handling, providing ‘1600Hz BLS’ versus the 600Hz BLS of the L55ET60. This doesn’t mean, to be clear, that the Panasonic L55DT65 refreshes its pictures 1,600 times a second. But it does reveal a much more sophisticated backlight system, enhanced by the local dimming engine, and at least raises hopes of cleaner, crisper motion reproduction.

Panasonic has also gone beyond the ET60 series by obtaining the endorsement of the Imaging Science Foundation (ISF) for the Panasonic L55DT65, leading to two ‘professional’ picture presets. As you would expect from this, the L55DT65 delivers some pretty extensive picture calibration tools, including colour and gamma management.

You also get an impressive amount of control over almost all aspects of the TV’s Hexa picture processing, including its noise reduction tools, a resolution booster, motion processing and the local contrast processing.
The L55DT65’s panel is an IPS type (delivering a wider viable viewing angle than ‘VA’ types), and it has a passive 3D filter in place of the active 3D system used by last year’s DT50 series. Actually, Panasonic has moved to passive 3D for all of its 3D-capable LCD TVs this year.

You get four pairs of passive 3D glasses in the box, compared with the two you get with the L55ET60.
On paper, the L55DT65 has done enough to justify its fairly high £1,995 price of entry. But it will also need to go some with its performance to seal the deal.

Starting out with standard definition – something that can cause big problems for screens as large as 55in – the Panasonuc L55DT65 does startlingly well. Pictures are upscaled to the full HD panel so that they look sharper without source noise getting exaggerated in the process. Also, unlike we often see with LCD TVs, colours lose hardly any of their natural toning during the upscaling process. 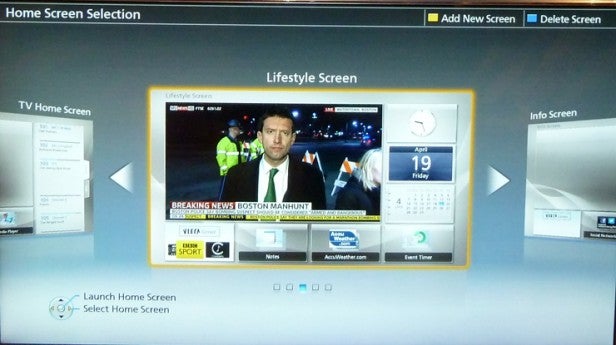 It’s also apparent, even with standard definition, that the Panasonic L55DT65 produces some startlingly bold yet also subtle and extremely natural colours, and that its pictures are exceptionally bright. In fact, once you’ve turned off the Ambient Sensor feature (something we personally always do) pictures look a bit too bright using the Dynamic or Normal factory presets that sit at the top of the picture preset list.

Happily, though, you can substantially improve this problem by reducing the set’s contrast setting to around 80 from the 100% level it starts out with on the Dynamic and Normal presets – the Normal one of which we suspect most normal users will feel happiest using for typical daytime TV viewing once they’ve made the contrast change.

Shifting gear to the HD footage that will surely fill most household’s viewing time on a 55in TV these days – especially one fitted with both Freeview and Freesat HD tuners – the Panasonic L5DT65 initially continues to impress. Obviously there’s a big step up in the sharpness of the picture, and it shows more detail than the L55ET60, in fact. What’s more, this impressive sharpness is delivered without a hint of noise, be it dot crawl or moiré interference.

The sense of accuracy and blend subtlety with the L55DT65’s colours increases greatly with HD, too. In fact, the set’s delivery of everything from tiny skin tone variations to the ultra-rich hues found in your average TV news studio and graphics is immaculate – a fact that helps the set deliver a great sense of solidity and depth even with its 2D pictures.

Add to the equation some superb motion handling that does a cracking job of suppressing both judder and LCD’s traditional motion blur, and it’s fair to say that bright, colourful content looks brilliant on the Panasonic L55DT65’s king-sized screen.

But what about dark footage? Does this hold up too, given the problems with such material exhibited by its predecessor?