Getting the deepest blacks and most natural colours out of the L39E6 does require the TV to take quite a hit in brightness terms, but this isn’t a heavy sacrifice to make for dark-room viewing in our opinion. Especially as even with the backlight levels really quite subdued the L39E6 still produces quite a decent amount of the shadow detail that adds life and authenticity to dark scene reproduction.

Overall, the key thing we like about the L39E6 is that unlike so many LCD TVs at its price level, its core panel design is sufficiently good to let people enjoy both really bright, colour-rich images and dark, contrast-fuelled images, depending on their tastes and/or moment to moment needs. Such flexibility remains quite rare in the relatively affordable TV world.

The L39E6 also impresses with its upscaling of standard definition sources, adding gentle amounts of detail while also, critically, managing to filter out source noise. At the very least, the processing doesn’t bring extra attention to source noise like lesser upscaling systems can. The colourscape with standard definition sources looks a bit more basic than it does with HD, but this is hardly unusual in the affordable LCD TV world.

Probably the biggest weaknesses of the L39E6’s pictures are a) that they don’t hold up over such wide viewing angles as those produced by Panasonic’s IPS screens, and b) that moving objects lose a bit of resolution as they pass across the screen. These really aren’t deal-breakers though, especially given the price of the L39E6. Indeed, the vast majority of film and TV lovers will be very satisfied with its overall handling of standard definition. 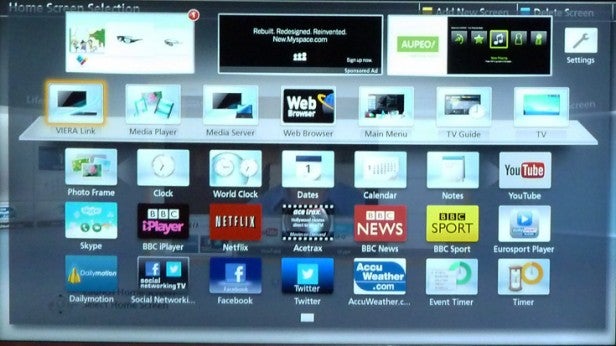 Gamers will be slightly less satisfied though, thanks to an average input lag measurement for the L39E6 of just over 60ms. This is, oddly, quite a bit higher than the figure recorded for the L42E6, and could slightly reduce your performance with time-sensitive games.

Turning finally to the L39E6‘s audio, surprisingly given the unfeasible slimness of the TV’s frame we found ourselves able to enjoy all regular TV shows without a trace of distortion or tininess, and even fairly heavy-duty sound mixes in action films are by no means unpleasant on the ears. The internal speakers of the L39E6 produce a passably open mid-range, reasonably well-rounded trebles and even a small amount of bass (though we certainly wouldn’t have minded a bit more low-frequency impact in an ideal world).

The L39E6’s new size point, good picture quality, reasonable price and outstanding smart interface combine to make it a seriously appealing option for anyone after a mid-sized, non-3D screen.