For years now Panasonic has stuck stubbornly – perhaps heroically – to the same message around its TVs: they should reproduce pictures exactly as the filmmakers intended. And given what I’ve just seen of the new Panasonic 65EZ1002 OLED TV at the CES in Las Vegas, it seems the brand has just taken this quest to a whole new level.

The 65-inch 65EZ1002 is Panasonic’s new flagship TV for 2017, usurping the top spot previously occupied by the brand’s OLED debut, the 65CZ952. And you can perhaps get a feeling for how good it is if I say that it crushes its much-lauded predecessor in almost every way. 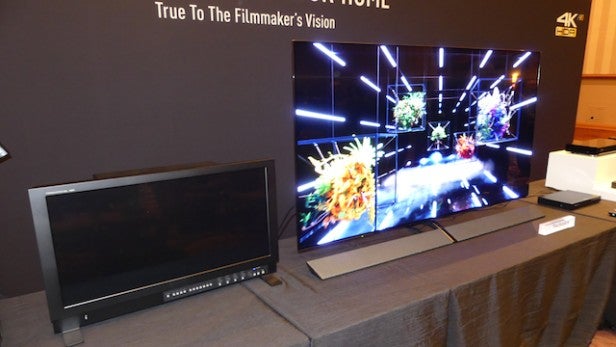 The improvements start as soon as you look at it. It sports a cleaner, less ‘shouty’ design than its predecessor, and – in a move that seems sure to please most video enthusiasts – it carries a flat rather than curved screen.

Right away I noticed how the shift to a flat screen has resulted in the 65EZ1002 suffering less with onscreen reflections than its predecessor. This is strengthened further by the apparent effectiveness of the new Absolute Black Filter system Panasonic has built into the 65EZ1002’s screen.

It’s not just the way you can watch pictures without having their impact reduced by reflections that makes dark scenes on the 65EZ1002 stand above those of the 65CZ952, though. Black areas on the 65EZ1002 also look black in ambient light, rather than becoming tinged with purple like they do with LG’s OLED TVs.

Even better, the incredible depth of the 65EZ1002’s black levels is emphasised by the huge leap in intensity of bright image areas. Bright peaks in HDR sources leap off the screen with a punch and dynamism well beyond anything I’ve seen from any OLED TV before, including LG’s 2016 models.

Panasonic claims a brightness peak of 800 nits for the 65EZ1002, up from 450 nits on the EZ952. This is impressive in itself, but in reality the peak brightness actually feels higher thanks to the way OLED’s self-emissive nature allows the brightest picture elements to sit right alongside the darkest ones without either polluting the other. 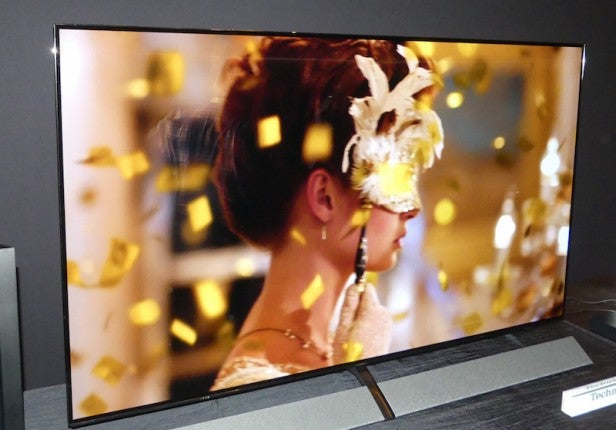 There’s no denying that even the much-improved peak brightness of the 65EZ1002 sits way below the 2000 nits being claimed by Samsung’s latest LCD TVs. But the 65EZ1002’s overall contrast performance ensures you get plenty of the ‘dynamic’ from its high dynamic range.

The 65EZ1002 is also incredibly – for my money, unprecedentedly – good at handling the very darkest, faintest details in dark scenes. A night-time clip of a pair of ninjas fighting in a Japanese garden enjoyed almost exactly the same amount of shadow detail and black tone accuracy that the same scene enjoyed on a professional-grade ($30,000) OLED mastering monitor Panasonic was running alongside the 65EZ1002.

There’s no sense of the flattening hollowness in dark areas that other OLED TVs suffer with, where they struggle to handle the step from total black to just above black.

There’s also none of the greyness or backlight clouding you get with LCD TVs, and the way the EZ1002 is able to retain colour subtlety and accuracy even in the darkest areas is just beautiful.

Actually, the EZ1002’s leap forward in colour terms over the CZ952 seems as potent as its enhanced brightness. It uses an even more advanced 3D Look Up table system – a colour registry system ‘borrowed’ from Panasonic’s professional monitors division – to that used by the CZ952 to deliver much more accurate tones. Skin tones, for instance, suddenly look a little over-stated and jaundiced on the CZ952 once they’ve been compared with the stellar balance and accuracy of the EZ1002. 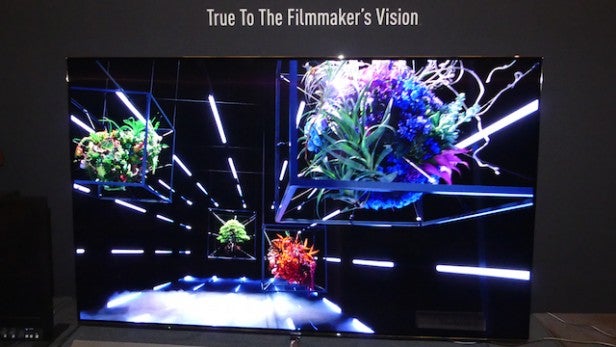 The new HCX2 picture processor inside the EZ1002, meanwhile, makes its presence clearly felt in the way Panasonic’s new OLED TV does away almost completely with the issues of bitty noise and rainbow striping in areas where there should be fine, smooth colour gradations. This almost noise-free colour performance gives the EZ1002 a major performance edge over any OLED TVs we’ve seen from LG so far.

Don’t just take my word for it about how outstanding the EZ1002’s colour handling appears to be, though. Film and TV colourist Dado Valentic was on hand to remind us that the 3D Look-up table system of the EZ1002 is so advanced that professional users can upload their own 3D LUT parameters, enabling them to actually use the EZ1002 to master films and TV shows for home entertainment purposes. In other words, you really could end up watching a film at home on the same screen it was mastered on in Hollywood. This is, of course, a huge deal for Panasonic’s ‘as the director intended’ ambitions.

If pushed to find fault with the EZ1002’s pictures, they’re clearly not as bright as those being pumped out by Samsung’s newly revealed QLED TVs, and I noticed some signs of detail and gradation ‘clipping’ in the explosions of a sci-fi action clip Panasonic was running. But to say the good overwhelms the bad would be a laughable understatement.

Panasonic was not, sadly, able to let us hear a demo of the EZ1002’s integrated soundbar. It certainly looks like it means business, though – and in any case, frankly it could sound like two cans and a piece of string and it still wouldn’t dampen my enthusiasm for getting an EZ1002 installed in our test room.

What are your early impressions of the EZ1002? Let us know in the comments below.