If you’re looking for arguably the best all-round OLED TV, this Panasonic is it. The custom-made 'Professional Edition' OLED panel is a real treat, both in detail and dynamics, and the provision of universal HDR support makes every other screen out there look deficient.

The GZ2000 is able to deliver a genuine height component to Dolby Atmos sound mixes, thanks to dedicated up-firing drivers.

Available in both 55 and 65-inches guises, we put the former through its paces.

As we expect from Panasonic, the design of the GZ2000 is clean and sober, and the quality of materials used is high grade. The dark metal bezel is slim, distinguished by three channel sound bar beneath the panel.

It looks clean, classy and uncluttered, the screen sitting virtually flush with the heavy aluminium central pedestal. Take a look at the rear though, and you’ll see an upfiring Dolby Atmos speaker module. 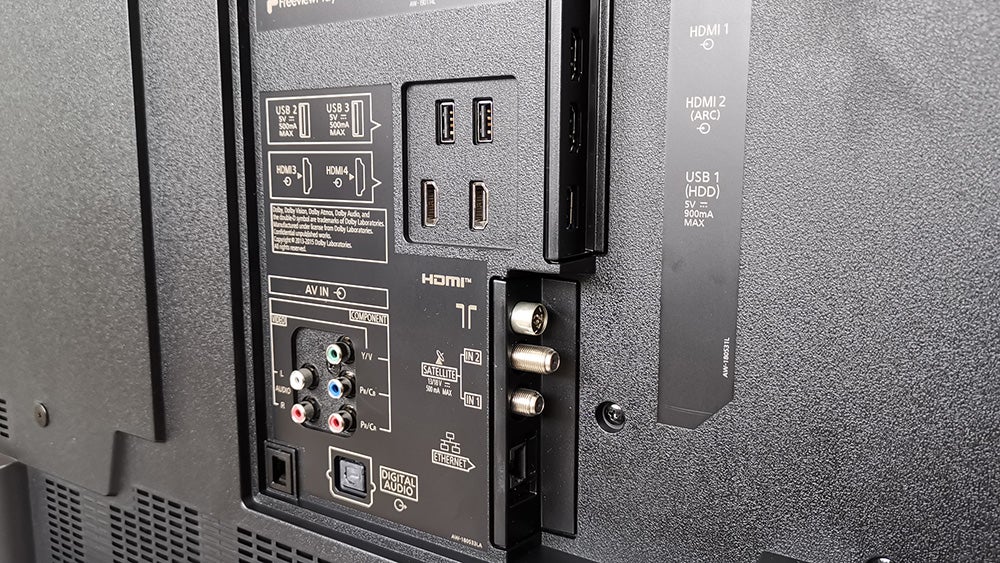 Despite all the extra hardware, the set’s overall footprint is no greater than a regular OLED panel. Those Dolby-enabled speakers are perfectly in line with the electronics and input board.

Panasonic TX-55GZ2000 Features and usability – My Home Screen is a simple, easy to use interface

Smart connectivity is built around Panasonic’s now mature My Home Screen v4.0 platform. This is an easily customisable smart interface that concentrates on offering superior content navigation for Freeview Play, as well as streaming services. All the required apps are here, including Netflix, Amazon Prime Video and YouTube. 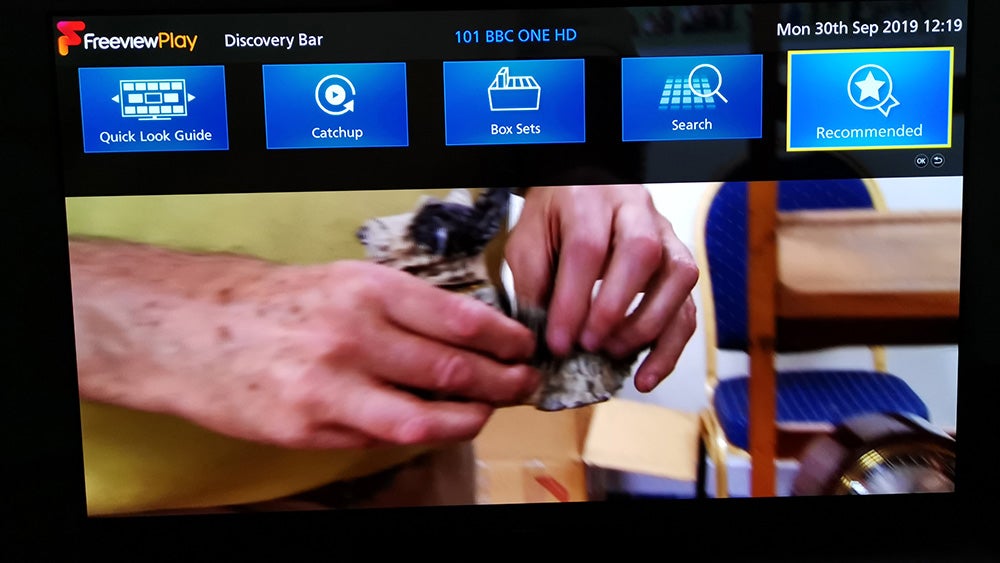 My Home Screen is actually a very easy interface to live with, it’s far less intrusive than Android, and lacks the sprawling complexity of LG’s webOS.

The provision of Dolby Atmos on-board also simplifies the user proposition – buyers really don’t need to embrace the cost of an exterior sound system to enjoy the benefits of 3D audio. But there’s a high price attached to such refinement.

Like all current OLED screens, the GZ2000 uses glass produced by LG Display, the only supplier of OLED panels. However Panasonic engineers have used proprietary heat management and panel cooling techniques, first honed for the production of plasma TV, to drive the panel harder to offer higher overall brightness. The company suggests this equates to an average picture level boost of around 30%.

The benefits quickly become apparent, and give the panel headroom to more effectively deliver HDR. This doesn’t mean the set is as bright as an LED LCD, but it does make for better viewing in rooms with higher levels of ambient light.

The GZ2000 covers all the HDR bases. In addition to regular static HDR10 and broadcast HLG, there’s support for dynamic metadata standards Dolby Vision and its rival HDR10+. The screen even complies with HDR Photo, a new standard which allows photographs to exploit HDR displays. 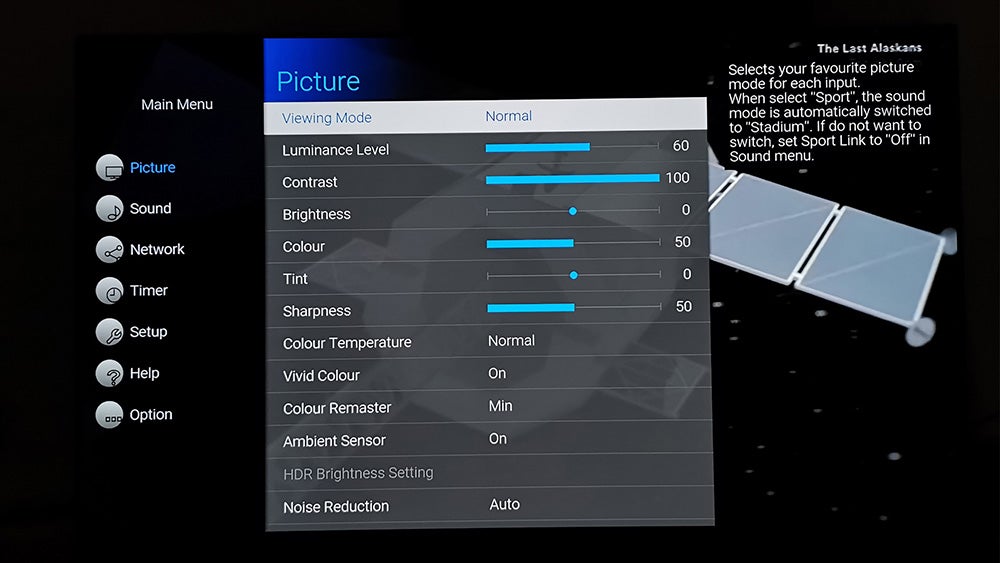 Images presets cover Dynamic, Normal, Professional Photo, Cinema, THX Cinema, THX Bright Room, True Cinema, Custom, Professional 1 and 2, Sport and Game. The set also offers Dolby Vision Dark and Bright modes, as well as a Netflix Calibrated Mode. The latter is directly comparable to the Cinema mode, and wouldn’t be our choice over Dolby Vision Bright as a default for the streaming service.

Using the Normal preset, the APL is consistently high (for OLED at least), with no significant sacrifice in dynamics or black level detail. This boost also proves beneficial in darker viewing environments.

The subtle variations in the set’s near black performance are outstanding, giving the GZ2000’s images enormous depth.

The black balaclavas of the AFL (Animal Liberation Front) in Okja (Netflix, Dolby Vision) are a great source of near black detail. Their disguise isn’t presented as a simple singular colour, but reveals texture and tangible weave. There has been some debate about low level flickering on OLED, particularly with LGs, but this doesn’t appear to be a problem here.

Fine detail performance is excellent, courtesy of the HCX Pro processor. No overt posterisation was noted, and it also does a convincing job upscaling 1080p sources.

Related: Everything you need to know about Dolby Vision HDR 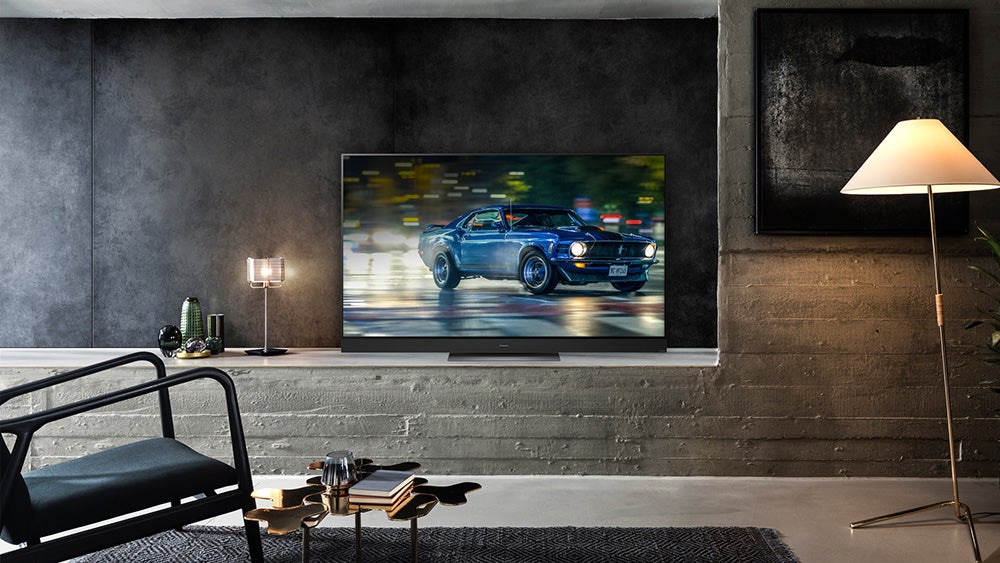 The GZ2000 is a top flight HDR performer. We measured peak HDR at 950 cd/m2 (aka nits), with a 5% HDR brightness window, using the Normal viewing preset. There’s no significant compromise when viewed with the True Cinema mode either.

With this kind of pin-prick HDR grading used theatrically, there’s no doubt that it can hit or exceed 1000 nits. The opening sequence to John Wick Chapter 3 (4K UHD Blu-ray) is a glorious example of this ability to sparkle and retain shadow detail in the caverns of New York City.

The GZ2000’s native high brightness also negates the need for aggressive tone mapping. The majority of HDR content is mastered for a maximum of 1000 nits, and in many instances falls far short of that. The GZ2000 can take this in its stride. The result is a smooth and convincing HDR image.

Colour fidelity is super, and it’s easy to appreciate the exquisite contrast and colour in the Dark Crystal (Netflix). In Dolby Vision Bright mode there’s plenty of gradation and texture in the shadows, while the highlights and psychedelic visual effects exhibit wonderful vibrancy.

Sonically, this Panasonic range topper is a revelation.

While there’s no shortage now of Dolby Atmos compliant TVs around, all require you to bitstream out an Atmos mix to awaiting hardware, be it a soundbar or AV receiver, in order to deliver something meaningful. That’s not the case here.

The screen doesn’t just deliver height, there’s a very real sense of over-head canopy, too. Bass response kicks in at around 100Hz. 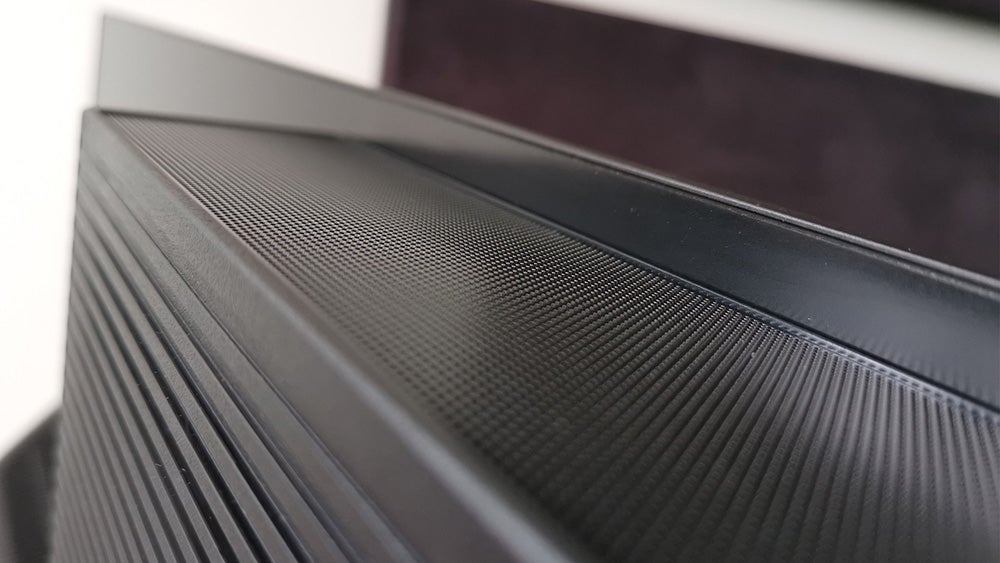 The Dolby Atmos speakers on the rear of the TV

To help with set up there’s a Space Tune feature, although this shouldn’t be confused with an intelligent calibration system – it’s simply a positional preset.

Sound tuning is by Technics – indeed, the screen even uses Technics low-jitter JENO Engine. The set’s console gaming performance is creditable. We measured input lag in Game mode at 21.5ms, which is fine for FPS fragging.

If you’re looking for arguably the best all-round OLED TV on the market right now, this Panasonic is it. The so-called Professional Edition panel is a real treat, both in detail and dynamics, and the provision of universal HDR support makes every other screen out there look deficient.

The implementation of Dolby Atmos is also best in class. The set creates a huge soundstage, casting audio wide, high and overhead – ideal for movies and a lot of fun with sports broadcasts encoded in Atmos. You really get a sense of ambiance and involvement.

The audio system works with Netflix on OTT sources and from external sources, such as UHD Blu-ray.

Of course, if you already have a Dolby Atmos home cinema system, the GZ2000 may well be over-specified. In which case we’d hold fire for a version built purely around the pimped panel (not announced yet, but surely it’ll come), or look to the Sony AG9, with its Acoustic Surface+ audio technology.