We hate to begin a review of a mostly excellent TV with a gripe, but on this occasion we have no choice. The TX-50CX802 is designed to sit on a full-width bar-style metal stand that curves back from each of the TV’s bottom corners. This means that, unless you’re going to be placing the TX-50CX802 on furniture that’s at least as wide as the TV, your lovely new 4K screen is literally going to fall flat on its face. 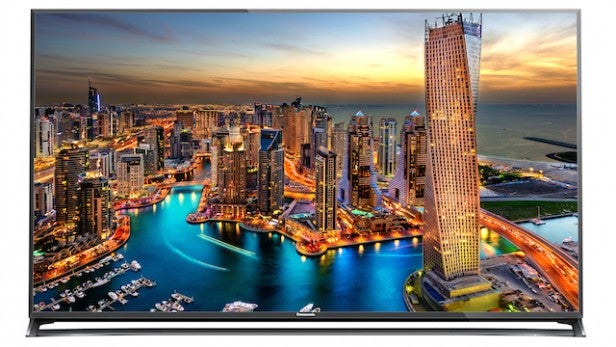 Otherwise, the TX-50CX802 is a fairly attractive set. Its dark-grey frame is incredibly slim. It’s barely a centimetre-wide on its top, left and right edges. Even the troublesome bar-style stand looks nifty, in that it’s almost invisible.

The TX-50CX802’s connections are good rather than great. The chief weakness is the provision of only three HDMIs; we’ve come to expect four from a high-end TV. On the plus side, all the HDMIs can handle 4K at 50/60p as well as the new HDCP 2.2 4K anti-piracy handshaking system.

Panasonic also offers plenty of multimedia goodness in the form of three USBs (one made to the 3.0 specification), LAN and built-in Wi-Fi network options, and a very handy SD slot for direct playback of photos and videos stored on a camera/camcorder’s SD card.

The network options are particularly important on the TX-50CX802. For as well as supporting both streaming from networked DLNA devices and Panasonic’s latest online smart TV platform, this year’s high-end models support some innovative and handy content-sharing features.

There are twin tuners on board so you can watch one programme on the TV and another on a networked tablet or phone, for instance. Or you can access your TV’s live broadcasts and recordings from anywhere in the world via your phone and tablet.

It’s even possible to send video and sound wirelessly from one 2015 Panasonic TV to another – a feature that essentially means you no longer need to have every TV in your house sat next to an aerial socket or any other physical picture source.

We mentioned earlier that Panasonic has a new smart TV platform. And it really is a major departure from the brand’s previous Smart Viera/My Home Screen offering. For starters, it’s no longer an all-Panasonic setup; it’s been designed in conjunction with Mozilla, using the Firefox platform. Second, it features a new, graphics-rich design approach. 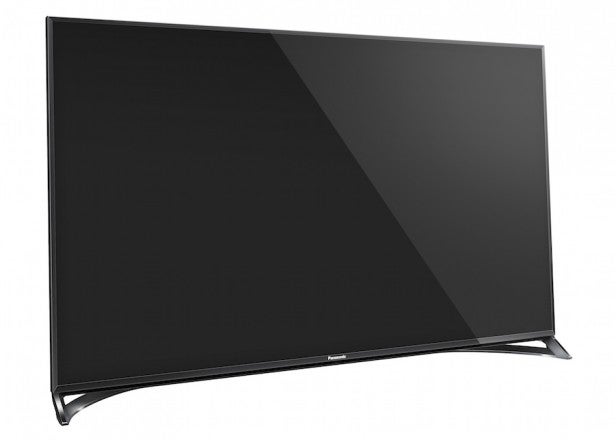 The thinking behind this shift to Firefox, we guess, is that it will make it easier for third-party developers to create apps for Panasonic’s TVs. However, our recent – largely unhappy – experience with Sony’s new Android TV system doesn’t necessarily warm us to this idea. Mercifully, though, the version of Firefox developed for use on Panasonic’s TVs is vastly more friendly than the Android TV interface. It’s far more customisable, does a much better job of both focusing in on content you might actually want, and doesn’t over-clutter your screen.

We’ll be looking at Firefox TV in much more detail in a separate review soon.

Firefox isn’t the only smart TV platform offered by the TX-50CX802; it carries the Freetime catch-up service too. Following a firmware update later in the year, it will also offer Freeview Play, which will provide “catch-up, on-demand and live TV, all in one place”.

These services join apps for Netflix, Amazon, Wuaki.tv and YouTube among others, to create a pleasingly wide range of content. This addresses what used to be a problem with Panasonic’s smart TVs.

The real heart of the TX-50CX802, though, is its video technology. Panasonic’s marketing push for 2015 focuses on an area that’s perhaps being shoved aside somewhat in recent years: picture quality.

Targeting movie lovers interested in cinematic experiences at home, Panasonic wants its 2015 TVs to deliver image quality as the directors intended when creating their movies and TV shows. As a result, the TX-50CX802 is the ultimate expression of this desire to deliver true video accuracy.

As well as offering the calibration and picture performance to accurately render the home-entertainment industry’s Rec 709 standard, the TX-50CX802 also claims to have the processing ability to handle the new high dynamic range (HDR) format. Film makers claims this finally allows them to break free of Rec 709’s limitations to deliver an experience that’s much closer to the one they designed for cinematic release. 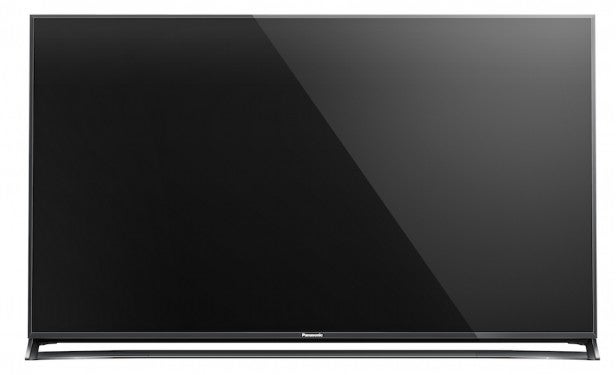 The TX-50CX802’s HDR support isn’t “live” yet; it will be unlocked by a firmware update later in the year when HDR standards have been finalised. But its screen tech certainly seems to go far beyond the requirements for Rec 709 accuracy. Particularly eye-catching is the claim that the new Wide Color Phosphor system used in the TX-50CX802’s panel can reproduce up to 98% of the Digital Cinema Initiative’s P3 colour standard. This is a much more expansive standard than Rec 709 and one that is, for now at least, starting to look like the first “target” for HDR on TVs.

The panel in the TX-50CX802 is an ultra-transmissive design, enabling it to deliver more brightness without using more power. Although Panasonic won’t be drawn on exactly how bright the set can go, it’s clear that the TX-50CX802 can be run more brightly than any previous Panasonic LCD or plasma TV.

The Wide Color Phosphor feature in the TX-50CX802 forms part of a picture-quality system that the company calls 4K Pro. The other key part of this is a new 4K Studio Master Processor chipset. This new chipset draws on the knowledge of Panasonic’s Hollywood Laboratory and the company’s experience with plasma TVs to deliver a number of claimed improvements.

Perhaps the most significant of these is the Accurate Colour Drive. This uses a 3D colour-lookup table able to address 8,000 registry points (taking in cyan, magenta and yellow ,as well as the usual RGB primaries) versus the 100 or so registry points typically used by LCD TVs.

A Black Gradation Drive processing component, meanwhile, uses 10-bit rather than 8-bit driving to produce 1,024 steps of gradation versus the usual 256 steps you get with 8-bit panels. Hopefully, this results in more visible shadow detailing.

All in all, there’s no doubt that the TX-50CX802 talks a mighty good talk. Let’s just hope all this fine-sounding tech finds its way on to the screen!

One last feature to cover is the TX-50CX802’s 3D playback. This uses the Active System, which indicates that Panasonic has shifted away from the IPS panel designs that hindered the performance of a number of its 2014 TVs – including its flagship AX9 models.

While we think Panasonic could benefit from more of the auto-optimisation systems employed so effectively by Sony over the past couple of years, the TX-50CX802 is undeniably a brilliantly flexible TV. It provides all the tools you could possibly need for getting pictures perfectly aligned with either a specific industry standard or just to your own personal tastes.

The True Cinema preset, for instance, does a brilliant job of hitting the Rec 709 standard for viewing in a very dark room, while the TX-50CX802’s panel characteristics also deliver one of the most effective THX settings we’ve seen. Our experience with some THX presets in the past has found that they’ve tended to highlight uncomfortable weakness in some LCD TV’s backlighting.

Like us, however, if you’d rather unlock more of the potential of that wide colour phosphor panel for which you’ve shelled out the big bucks, then with a little tinkering the TX-50CX802’s Normal setting can deliver remarkably good “remastered” pictures too. 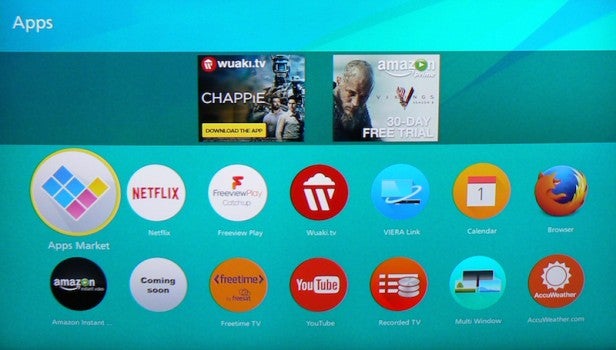 To achieve a great movie picture, we’d suggest setting the backlight to around 45, contrast to around 80, Colour Remaster to Min and the Adaptive Backlight Control to Max – anything lower causes blacks to look grey unless you reduce the backlight further.

In the past, we’d have recommended that you leave Panasonic’s Intelligent Frame Creation – which becomes 24p Smooth Film with 24p sources – off for movie viewing. However, the motion processing is so good on the TX-50AX802 that we actually preferred to use it on its Minimum setting. This avoids reducing the impact of the 4K resolution by the occasional moments of judder (beyond the natural 24p effect) experienced if motion processing circuitry is off.

It’s worth adding here, too, that Panasonic offers a few interesting “neutral” content options in its menus. These are designed to reproduce 1080p and 4K sources in as direct a way as possible, with minimum intervention from the TV’s own processors. These include a 4K upscaling mode that simply quadruples each pixel, rather than trying to calculate the best look for new pixels in the way of a typical upscaling engine.

For reasons already given, our feeling is that Panasonic’s remastering tools are now so good that it seems a shame not to take advantage of them. Ultimately, we can’t think of any TV that works harder to be all things to all men and – provided you’re willing to commit to a little experimentation – this is no bad thing.