We’re a little ambivalent about the 47AS740B’s design. It’s attractive enough in its brushed metal frame sat low on a strikingly minimalistic frame-style desktop stand. Neither its bezel nor its rear are quite as skinny as those around some TVs these days, but that’s not a big deal where we’re concerned. More problematic is the rather flimsy nature of its build quality, which feels overtly lightweight and plasticky. 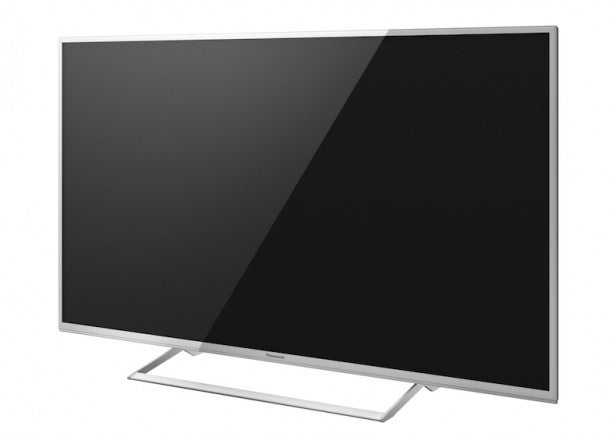 That said, we’ve already seen one flimsily built TV this year, the Sony 40W605, deliver an excellent picture performance, so we have no intention of prejudging the 47AS740B’s performance just because it’s light enough to carry around under one arm.

Connectivity is solid, with highlights of built-in Wi-Fi, three USB ports, an SD card slot (a welcome find we wish more TVs would provide) and three HDMIs. In an ideal world we might have hoped to see a TV of the 47AS740B’s stature carrying four HDMIs, but we guess three will be enough – just – for most households. Especially when the 47AS740B’s inclusion of Freetime technology arguably reduces the need for one of the potential external HDMI-connected boxes a normal TV might need to have added to it.

The TV’s picture spec is fairly formidable. For as well as an edge-lit IPS LED panel claimed to deliver a 178-degree viewing angle (much wider than the realistic viewing angle of rival VA LCD technology) it’s got a ‘1200Hz’-like motion system delivered via a combination of a 100Hz native refresh rate, a scanning backlight and frame interpolation processing, and it delivers 3D using the passive system. Two pairs of 3D glasses are included.

It’s with its Smart TV features – now known as Smart Viera – that the 47AS740B really starts to get interesting, though. The headline feature is integrated Freetime, whereby you can track back a week on the electronic programme guide as well as forwards a week, using catch-up TV streaming services to access programmes you may have missed.

We’ve long been fans of the backwards EPG approach to catch-up TV, so it’s great to see it turning up finally integrated into a TV rather than only being available via a set-top box. Crucially Freetime also solves a long-running weakness of Panasonic’s Smart TVs by introducing compatibility with ALL the main four UK catch-up TV channel providers: The BBC, ITV, Channel 4 and Channel 5. Panasonic has only previously been able to offer the BBC iPlayer from these key catch-up platforms, with Samsung the only other platform to offer all four.

We were worried cramming Freetime into a TV might result in horribly sluggish operating system, but actually the 47AS740B whizzes along quite nicely even when loading past EPG listings and booting up catch-up TV apps. 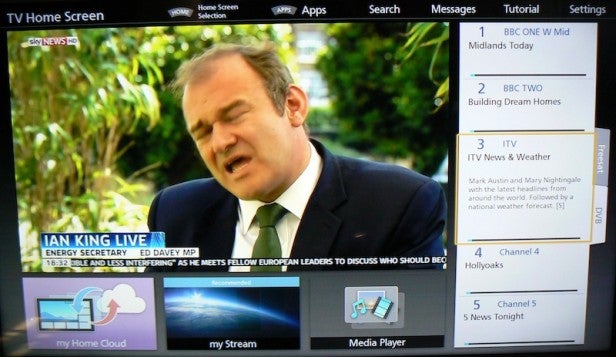 Also new this year is TV Anywhere – a brilliant feature that lets you access your TV’s tuners (or stuff you’ve got recorded on a USB drive attached to the TV) from smart devices anywhere in the world. The genius thing about this is that it means you can watch UK programmes while abroad that would be blocked if you tried to access them via a channel’s internet site.

Panasonic has extended its My Home Screen interface concept nicely too, introducing a new level of personalisation thanks to the implementation of a voice recognition system alongside the face recognition system made possible by the 47AS740B’s inclusion of a built-in camera on its top edge.

Another handy new feature is myStream. Fire this up and you get a scrolling row of tiles showing stills of content culled from the likes of YouTube, the TV tuner, your multimedia sources and your recordings. Over time the content here starts to reflect your own tastes based on analysis of your viewing habits. You can filter the myStream content to show just the type of content you wish, or a mixture of every source.

These new features come on top of the continuation of the My Home Screen system Panasonic introduced to wide acclaim last year, where you and other members of your household can set up a series of personalised home screens featuring different content themes or customised to show just the apps and content sources you personally most use.

We’ll be having an in-depth look at the Smart Viera system in depth in a future review, so we’ll leave it here for now. But to sum up briefly, adding so much extra content and interface innovation has made an already good smart system even better.

Panasonic tries much harder than most to take the brain strain out of initial installation, with some well-written and comprehensive onscreen instructions and lots of helpful graphics. It’s not quite up there with LG’s Bean Bird in charm offensive terms, but it still does a good job of trying to get everybody using all of the TV’s features. 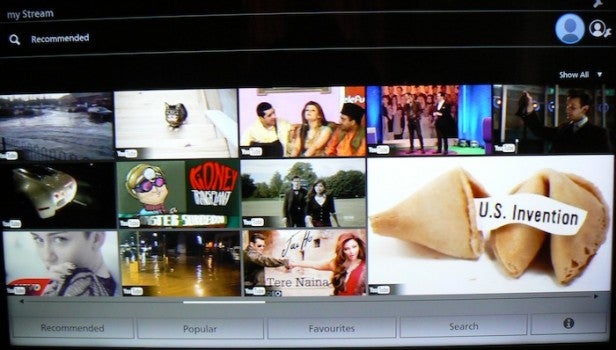 As usual with relatively high-end Panasonic TVs, you’re provided with a very healthy array of picture adjustments. These include a backlight adjustment (something we’ve been wanting on Panasonic TVs for ages); white balance, colour and gamma management; plus extensive control over all the key elements of Panasonic’s dual-core plus picture processing engine, such as noise reduction, dynamic backlight adjustment, and Panasonic’s Intelligent Frame Creation motion processing system.

An interesting extra tweak this year is a custom contrast control that lets you manually adjust the strength of the set’s adaptive gamma control, black expansion and clear white effect components – though there’s also an Auto mode for this if ‘going manual’ sounds a bit scary.

Getting the best out of the 47AS740B’s pictures chiefly involves trying to work around some contrast issues we’ll get into in the picture quality section. For film viewing we’d recommend the backlight be set as low as 30-35%, with contrast at around 75. Leave the Adaptive Backlight feature on, and basically don’t stick with any of the provided picture presets, as they all fail to acknowledge the contrast shortcomings.