You know a TV’s pictures are something special when it gets five stars despite being a bit chunky, not all that bright, and sounding like an asthmatic

Panasonic isn’t the shoutiest TV brand around, and that means its products can sometimes get lost in the shuffle.

But its reputation among Hollywood professionals is second to none, and it’s capable of turning out some profoundly competitive televisions. So does this TX-42LZ980 – the smallest model in Panasonic’s entry-level-but-one OLED range – enhance that reputation, or does it get drowned out by some shoutier alternatives?

The Panasonic TX-42LZ980 is on sale and in the United Kingdom it’s available for around £1199. Panasonic decided it’s better off pulling out of both American and Australian TV markets some years ago, so customers who want an excellent little OLED TV will have to look elsewhere.

Probably at LG and Sony, in fact, both of whom offer very acceptable 42-inch OLED TVs indeed – the LG rival is a little more affordable, the Sony alternative a little more expensive.

There’s not a lot of wriggle-room where the design of televisions is concerned these days – or, at least, there isn’t if you’re any kind of sensible TV manufacturer. Panasonic, of course, is about as sensible as they come – and so it’ll come as no surprise to learn the TX-42LZ980 is an unremarkable-looking television.

The bezels on both sides and across the top are extremely slim, and even the chunkier version along the bottom (where IR sensors, mics and some understated branding are kept) isn’t what you’d call big. The chunky pedestal on which the LZ980 stands doesn’t swivel, but it’s compact enough that the Panasonic doesn’t need a big surface to sit on.

Of course, you may fancy hanging your new TV on the wall. You may fancy it less when you see the LZ980 in profile, though. There’s little of your fabled OLED slimness here – it’s almost entirely 67mm deep, and that’s the opposite of slim these days. And unlike quite a few more expensive alternatives, there’s no cable-management or -concealment here – all the Panasonic’s physical inputs are exposed, and consequently it’s tricky to keep all your cables tidy.

Panasonic, like Philips, is grown up enough to put its customers first – so unlike the equivalent TVs from LG, Samsung, Sony, the TX-42LZ980 is compatible with every worthwhile HDR format. This means HLG, HDR10, HDR10+ Adaptive and Dolby Vision IQ HDR standards are catered for – which, in turn, means any HDR-assisted content can be fully dealt with.

Panasonic, of course, has long been acknowledged as one of the true masters of picture processing – and despite its relatively lowly position in the Panasonic pecking order, the LZ980 nevertheless features the company’s HCX AI Pro processing engine, which bodes well. Getting content on board in order for the processor to do its thing is simple – as well as wi-fi and Bluetooth wireless connectivity, the LZ980 has a fistful of physical connections.

There are four HDMI inputs here, and two of them can fully accommodate your current-gen console: they’re HDMI 2.1-enabled, and are comfortable with 4K/120Hz, ALLM, VRR, AMD FreeSync Premium and (up to 60Hz) Dolby Vision gaming.

One for them also takes care of eARC responsibilities, admittedly, so if you’ve two games consoles and a recent soundbar you may find this insufficient – but for the majority, this line-up will be perfectly acceptable. In addition, you’ve three USB slots, three aerial posts for the twin TV tuners, and an Ethernet input. Outputs consist of a digital optical Toslink and a 3.5mm analogue that can be used either as a headphone socket or a pre-out to a powered subwoofer.

As is usual with Panasonic, set-up menus are a model of legibility and simplicity. The company’s pro credentials are reinforced by the amount of fine-tuning it’s possible to indulge in when setting up your LZ980, but equally there are numerous worthwhile picture presets (plus Filmmaker mode, which remains far from worthwhile) to give those of us who don’t fancy a prolonged set-up process plenty of good-looking options.

As is not at all usual with Panasonic, the smart TV interface here is excellent. This is the seventh version of My Home Screen, and the company has finally got it right. The interface is clean, only occupies maybe a third of the screen, and is home to every high-profile streaming and catch-up service (as well as quite a few lower-profile alternatives).

To navigate these user interfaces, Panasonic provides a noticeably large full-function remote control. It’s big enough to use as a weapon, features no undersized buttons and has a prominent mic button – the TX-42LZ980 is compatible with both Amazon Alexa and Google Assistant.

Because the 42-inch LZ980 doesn’t use a next-gen super-bright OLED panel, and because cramming over eight million pixels onto such a relatively small screen can negatively impact the amount of light they can emit, this Panasonic isn’t the brightest OLED around. If you do a lot of watching with all the lights on or in blazing sunshine, you may feel it’s not bright enough.

In every other respect, though, the TX-42LZ980 is a remarkably accomplished, thoroughly convincing and absorbing watch, one that’s subtle and nuanced enough to make even some very well-regarded alternatives look a bit coarse and over processed.

Given a 4K UHD Dolby Vision-boosted Blu-ray disc of the borderline-coherent Bullet Train to deal with, the Panasonic just doesn’t put a foot wrong. It lacks peak brightness, sure Amazon Alexa but the white tones it generates are clean, packed with detail and variation, and naturalistic. Seen in tandem with black tones – similarly clean and detailed, equally varied, and of that special OLED-tastic depth that never fails to satisfy – the resulting contrasts are wide and convincing.

The overall colour palette is wide-ranging, vibrant without getting shouty, and – that word again – convincing. Skin-tones, in particular, are thrillingly life-like, and even when given what might at first seem to be an area of uniform colour to deal with – a sports field, say – the Panasonic can find nuance and variation within it.

It draws edges with absolute confidence, generates respectable depth of field, and handles on-screen motion with something approaching fanaticism. There’s a sort of effortlessness to the 4K images the LZ980 delivers, a casual correctness that makes watching them no kind of chore at all.

Upscaled images, even those derived from overtly lo-res sources, are no less enjoyable. The Panasonic is giving away a little detail, of course, and some of the subtlety of its colours goes astray too, but in broad terms this is a very capable upscaler. Edges remain composed, motion remains unflustered, and watchability is diminished not at all.

Switch to Game mode and the good news just keeps on coming. Getting latency down to a respectable 14ms comes at a price, of course – console-derived images look just a little coarse compared to those accessed from other sources – but lighting, contrasts and, most importantly, motion-control are always impressive.

If the Panasonic TX-42LZ980 is capable of surprise and delight where its picture quality is concerned, sound quality is at the other end of the scale. No one’s expecting miracles from a two-channel system driven by 30 watts of power, of course, but nevertheless it doesn’t prepare you for just how weak, stressed and toppy the LZ980 sounds.

Yes, it can accept and deal with a Dolby Atmos soundtrack – but the stereo result is wheezy and short of substance. Set just a little money aside for a half-decent soundbar and you won’t regret it.

You want big image quality from a fairly little TV. The concept of the pint-sized OLED screen is still quite new – but on this evidence Panasonic has nailed it.

You want to hear, as well as see, where your money’s gone. The sound the Panasonic makes is almost diametrically opposed to the pictures it serves up.

Sometimes you just have to concentrate on what’s most important. Considered as an all-round package, the Panasonic TX-42LZ980 is not without problems – its chassis is deep, its sound is feeble and it struggles for peak brightness. But what, actually, are you buying a new TV for? To admire how slim it is, or to admire the extraordinary fidelity and realism of its images?

We test every television we review thoroughly over an extended period of time. We use industry standard tests to compare features properly. We’ll always tell you what we find. We never, ever, accept money to review a product. 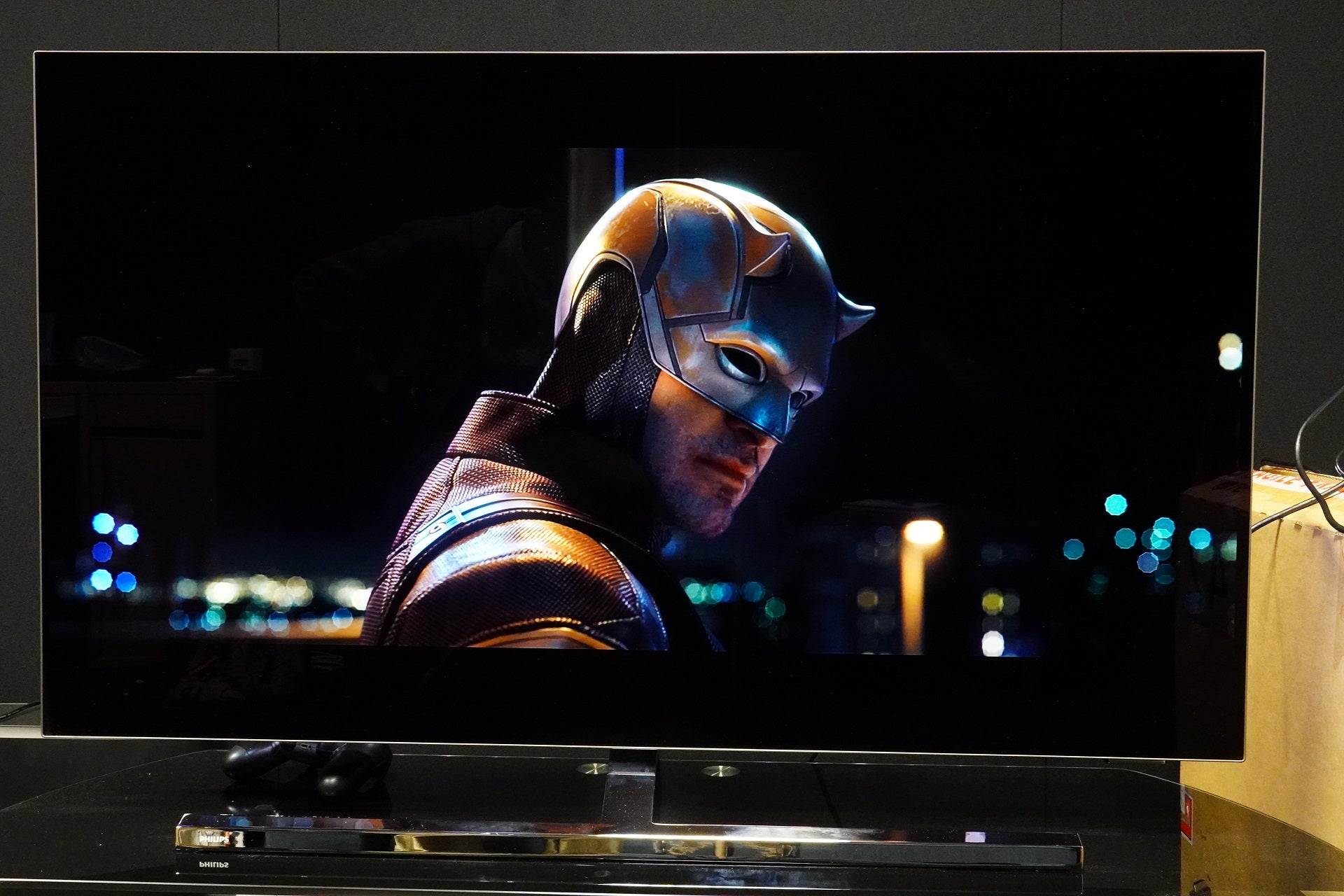 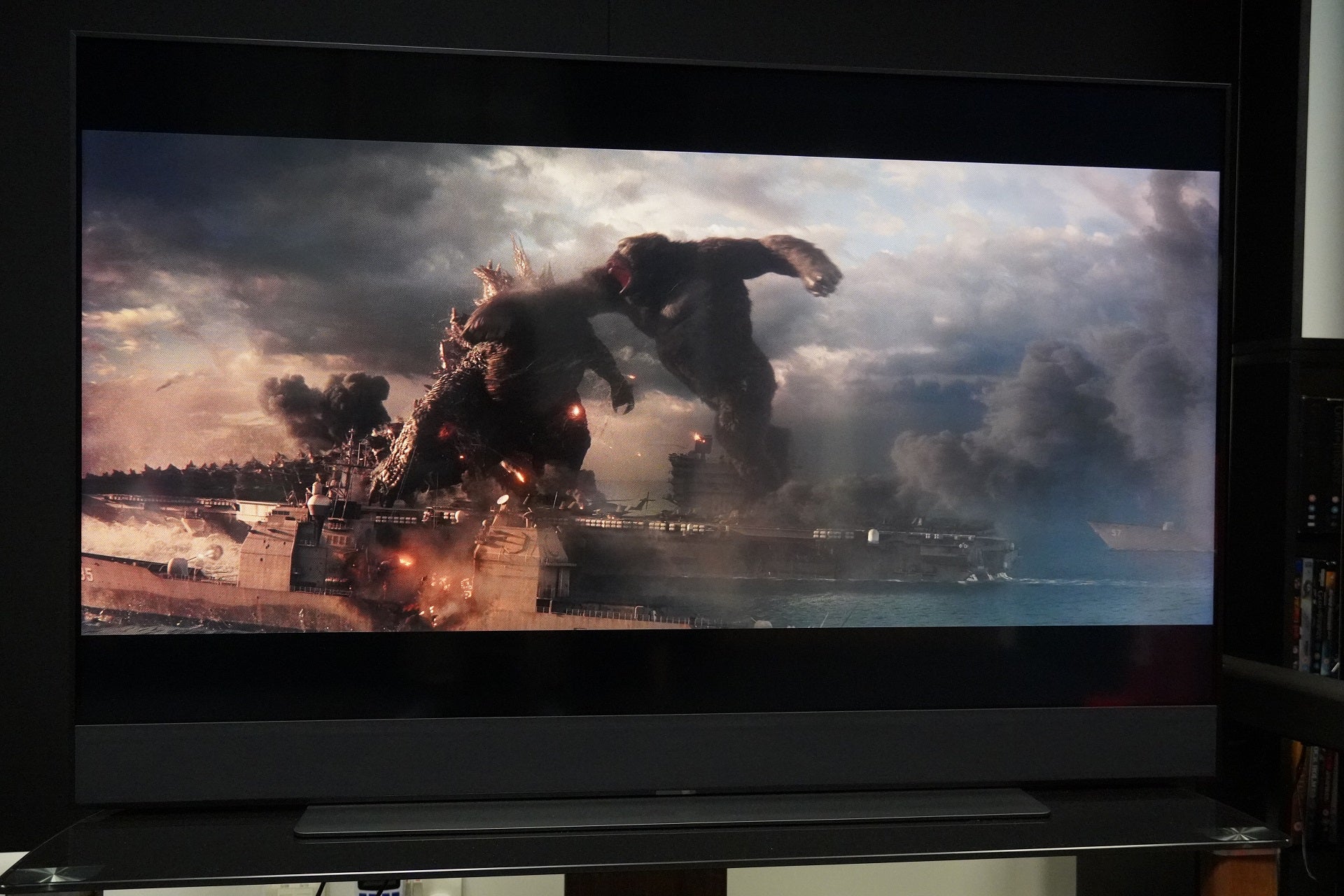 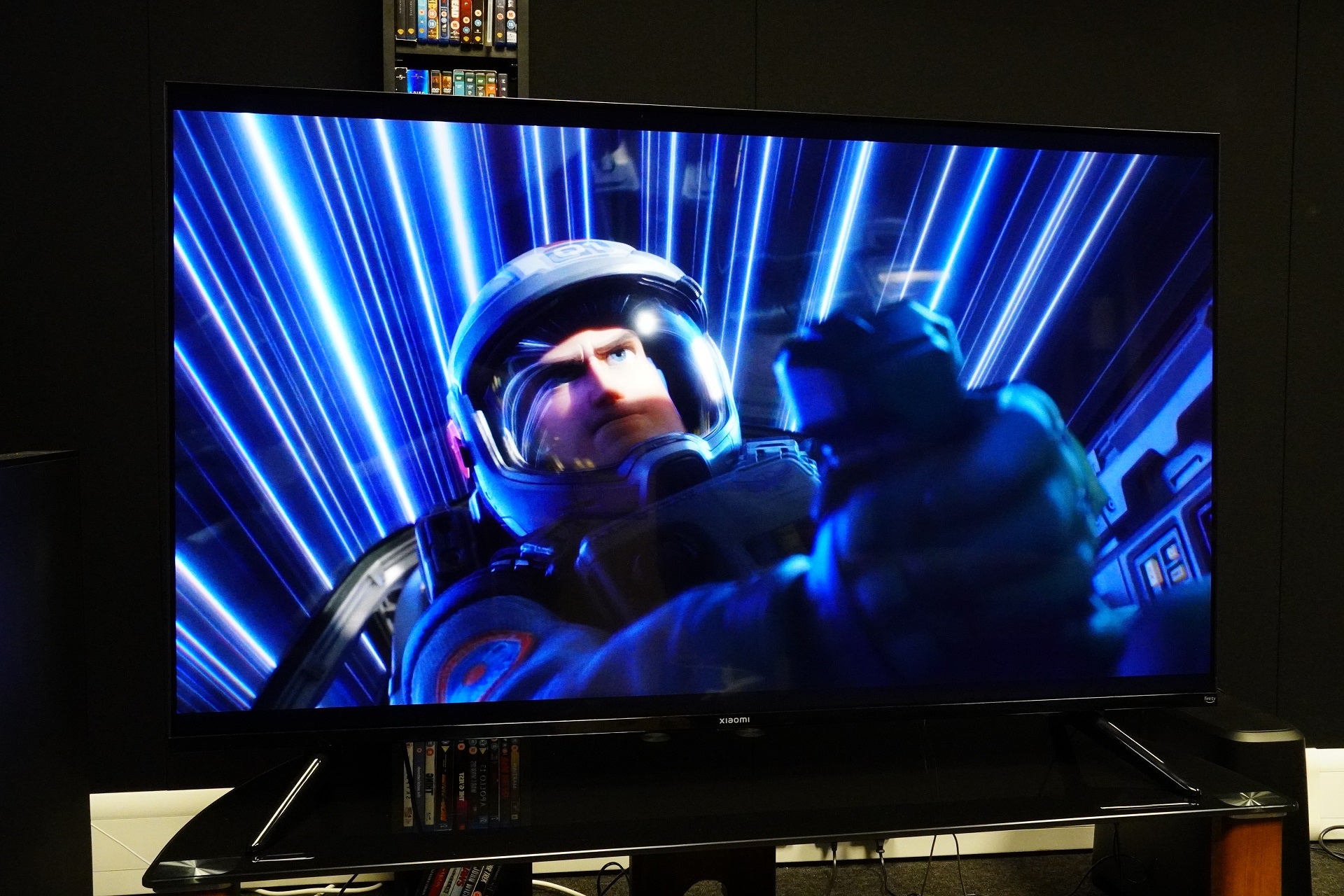 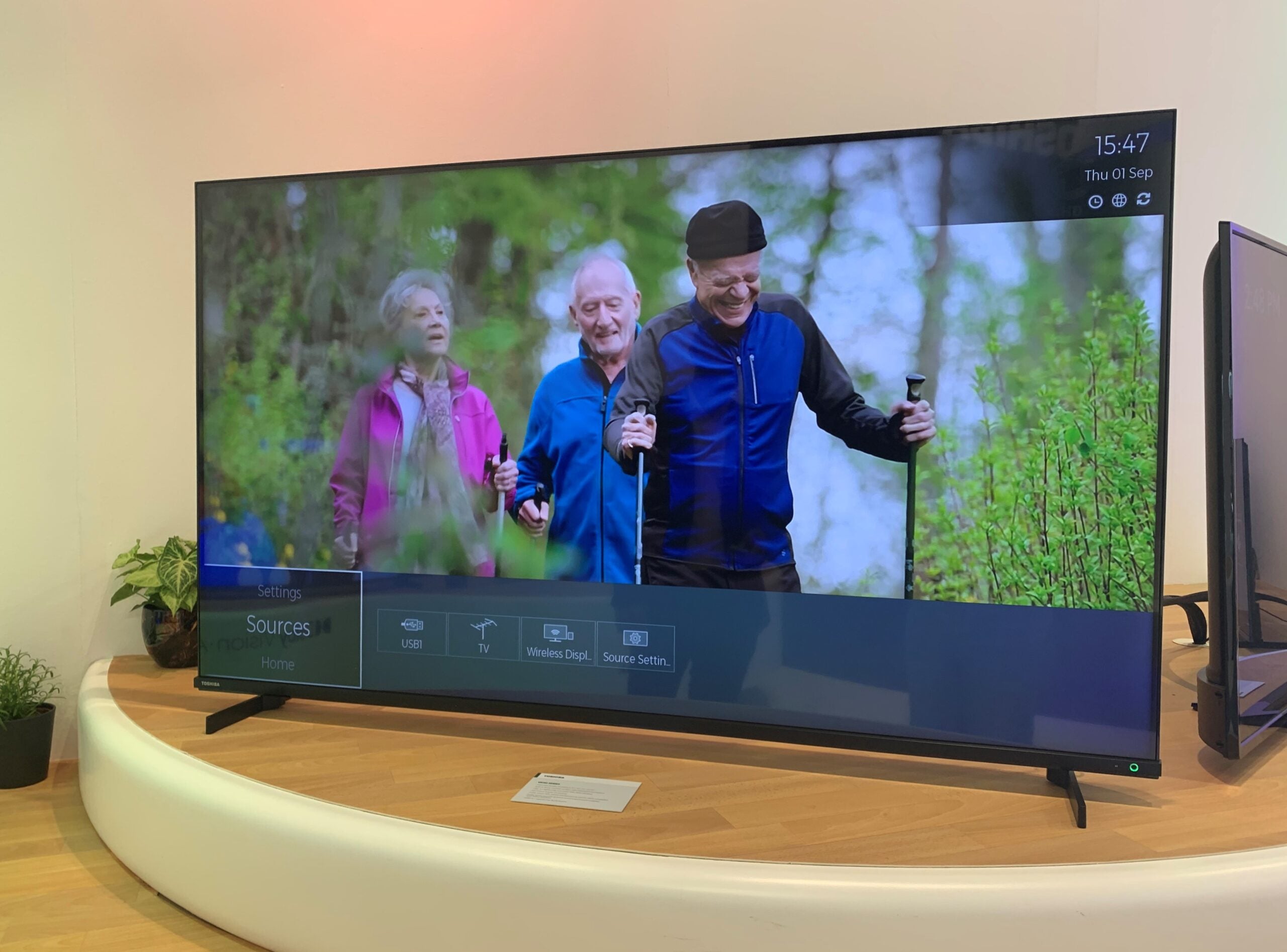 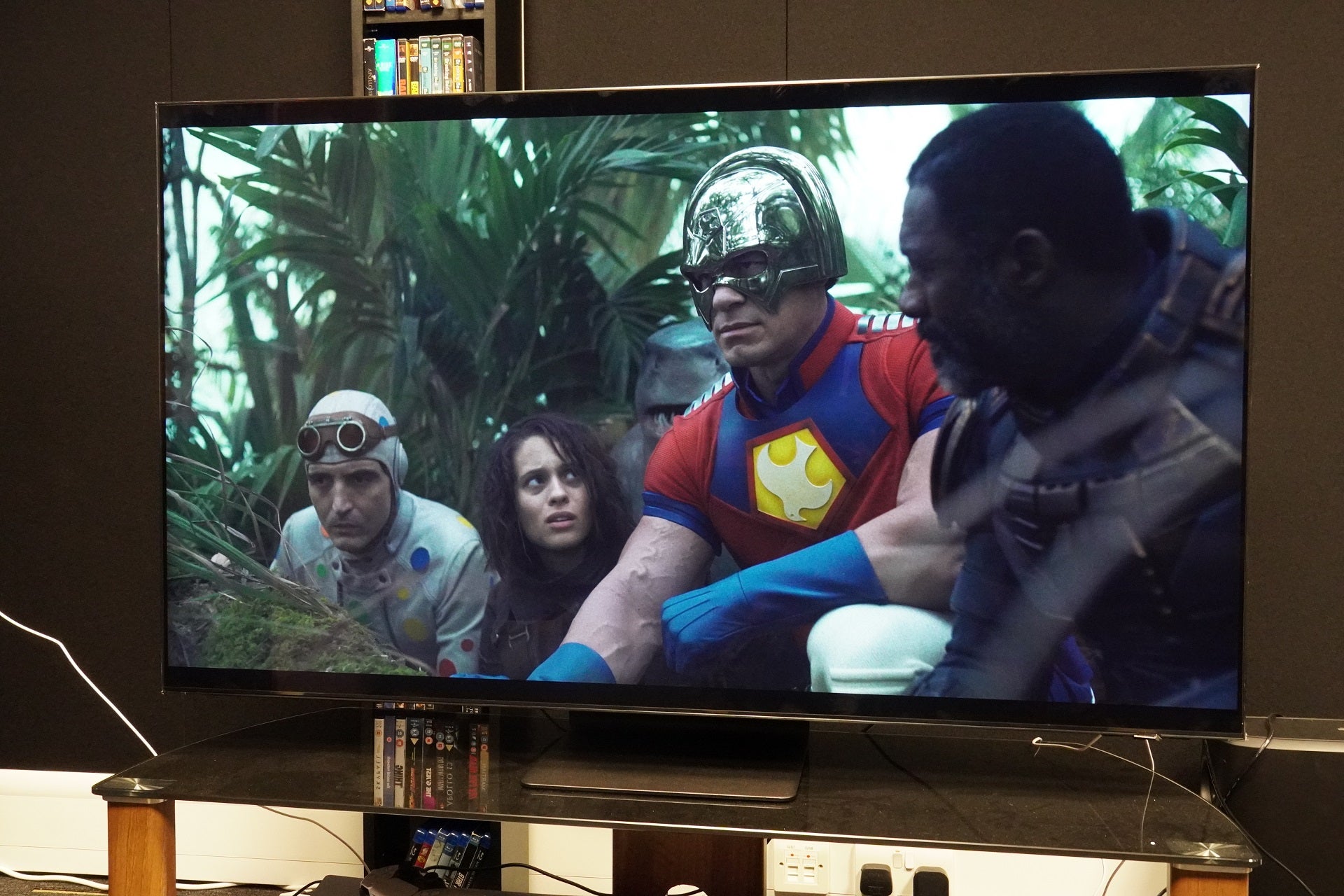 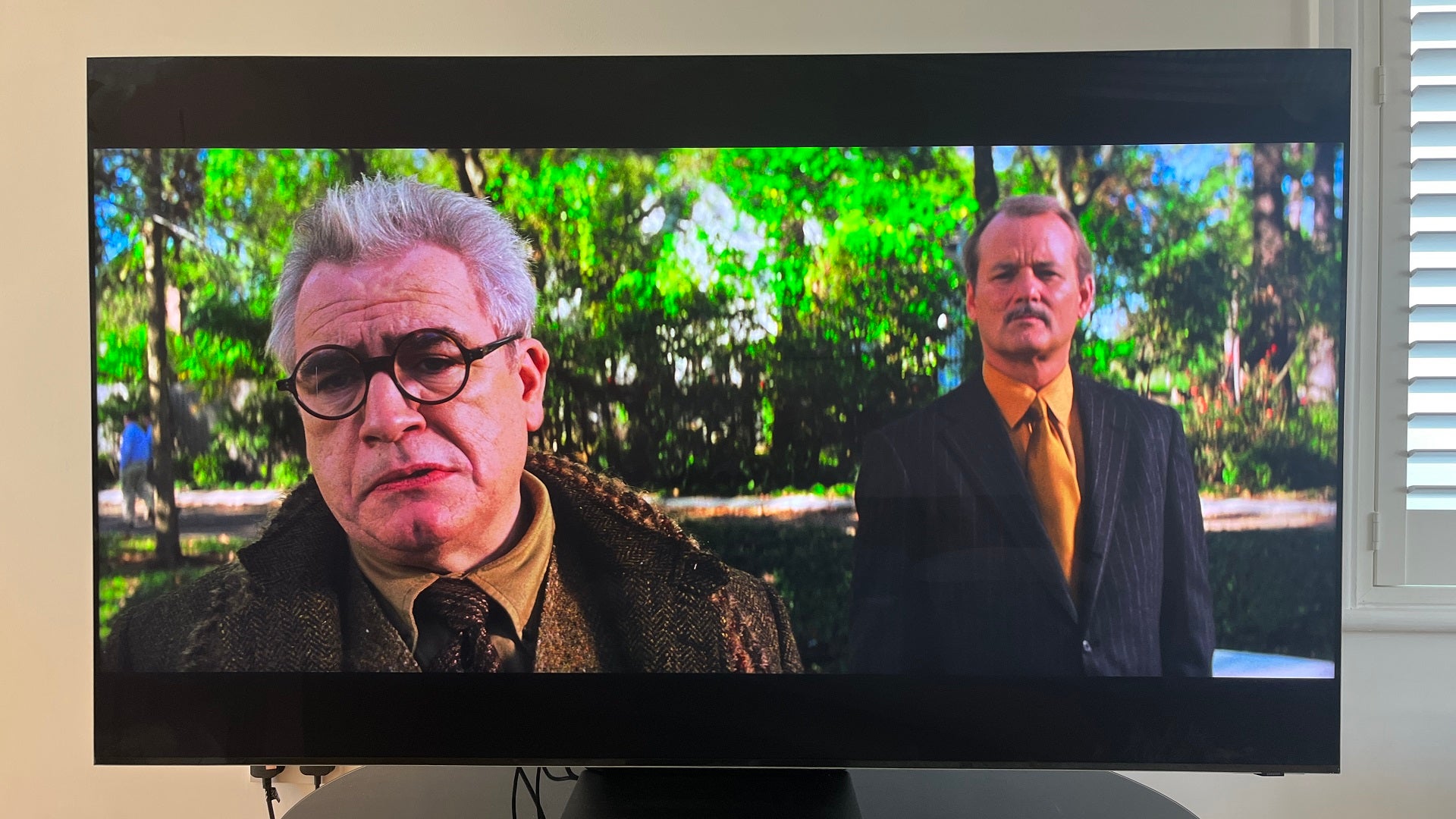 Does the 42-inch Panasonic LZ980 have an OLED EX screen?

As far as we know, the TX-42LZ980B doesn’t have a screen that supports the brighter OLED EX technology.

Which HDR formats does the 42LZ980B support?