I spent last week out in Japan at Panasonic’s ToughBook facility. It was a good opportunity for me to witness first hand just how much R&D and testing is done before a ToughBook hits a customer’s desk. It’s quite scary how much punishment the fully rugged ToughBooks have to go through, but the semi-rugged machines aren’t pushed quite so hard, and it’s one of those that I’m looking at right now. 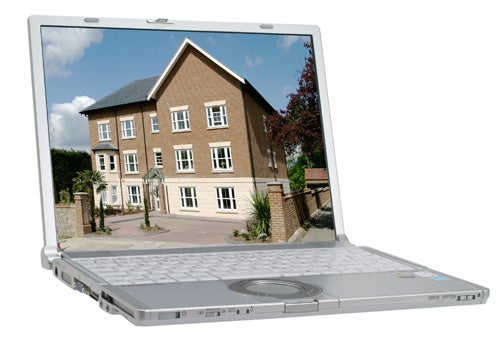 I reviewed the ToughBook CF-W5 a little while ago, which was the latest in a long line of W series machines with 12.1in screens and a 1,024 x 768 resolution. But the CF-Y5 is a different beast, with a slightly larger 14.1in screen running a far more appealing 1,400 x 1,050 resolution. Despite the extra physical dimensions, the CF-Y5 still looks and feels quite svelte, which is what you want from a notebook that you’ll be carrying around with you every day.


Along with the CF-Y5 comes new branding from Panasonic. No longer are these semi-rugged notebooks called ToughBook Light models, they now come under the new ToughBook Executive moniker. With the ToughBook Executive line, Panasonic is trying to grab customers who are looking for notebooks that are thin and light, but don’t compromise build quality. Obviously these machines aren’t near indestructible, like the fully rugged CF-19 that I reviewed a few weeks ago, but they’re definitely tougher than the average notebook. 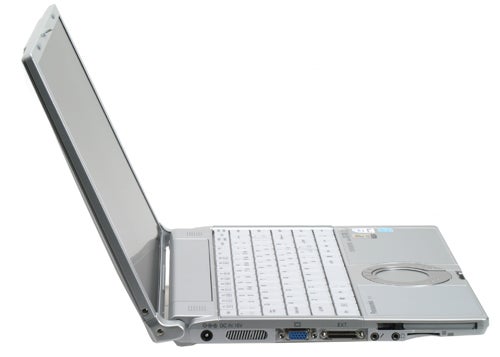 Despite the fact that I’m a fan of small and light notebooks, I find the extra physical size that the CF-Y5 offers over the CF-W5 a welcome addition. In my reviews of both the CF-W5 and the CF-W4 before it, I mentioned that 1,024 x 768 is a slightly disappointing resolution for a notebook these days, and I have to say that the extra desktop real estate offered by the CF-Y5 makes a world of difference. One of the reasons that the W series notebooks have lagged behind in terms of screen resolution is Panasonic’s reluctance to switch to a widescreen aspect ratio – a 12.1in widescreen display tends of offer considerably more desktop real estate at 1,280 x 800. I asked the engineers in Japan why the ToughBooks haven’t gone widescreen yet and was told that customers hadn’t asked for widescreen. Listening to your customer base is very admirable, but it’s more than likely that those customers haven’t considered the inherent benefits that a widescreen aspect ratio would bring.

It therefore comes as no surprise that the CF-Y5 sports an old school 4:3 aspect ratio screen, but it’s not so much of an issue here because of the increase in screen resolution. The screen is also a very good example with even lighting across the entire surface and not a dead pixel in sight. The viewing angle is also impressive on all planes. Unlike most notebooks that pass through the TrustedReviews lab, the screen on the CF-Y5 doesn’t sport a high contrast glossy coating, but since the ToughBooks are aimed at business users this isn’t surprising. Despite the fact that I quite like glossy screens, they can tend to be harder to work with in office lighting conditions, and if you’re not planning on watching any video on your notebook, a standard TFT may be a better option. 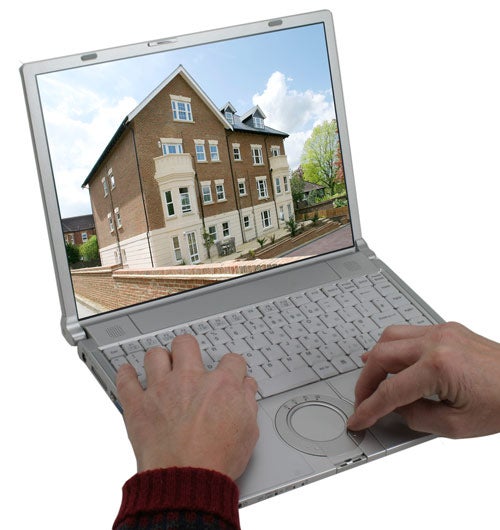 They keyboard has a very solid feel to it no matter how hard you strike the keys. Although there were some keyboard flex issues with early ToughBook Light models, the CF-Y5 exhibits no such problems. Each key feels completely separate from the adjacent ones, with a significant amount of travel and strong break. Panasonic has got the feel just about perfect with this keyboard and my only real complaint is the overly small Return key. The Spacebar is also small, but I can’t say that I ever missed striking it, even when typing at high speed. 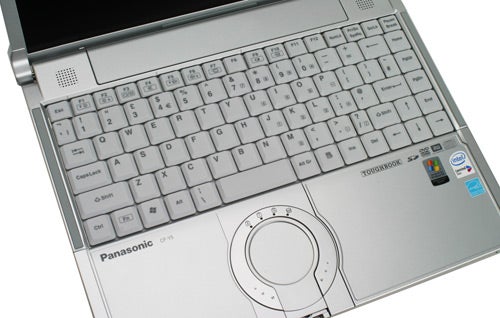 But the best thing about the keyboard on the CF-Y5 is its resilience to liquid spills. Inside the chassis, the circuit board is completely sealed against water ingress, so if you happen to spill a glass of water over the keyboard while the machine is on, the liquid will simply drain through the bottom of the case. Having seen an Apple MacBook come out second best in a fight with a cup of coffee, I know how impressive this actually is. Of course if you happened to spill coffee or Coke over the CF-Y5 you’d still end up with very sticky keys, but if you’re smart you’ll rinse it through with water straight away, safe in the knowledge that more liquid won’t make matters worse.

Below the keyboard is Panasonic’s trademark round touchpad. Despite the odd shape, this touchpad works very well and it’s quite cool being able to scroll through documents and web pages by circling the touchpad. The touchpad is surrounded by a silver ring with left and right buttons along with indicator lights for hard disk activity, Caps Lock, Num Lock and Scroll Lock.

The chassis is constructed from magnesium alloy and the result is a very light notebook considering its size. Panasonic quotes the weight of the CF-Y5 as 1530g, but my sample has obviously been on a diet, because it only weighed 1509g on the TR scales. Not that 21g will make a huge difference of course, but the fact that Panasonic has created a 14.1in notebook weighing around 1.5kg is no mean feat. In fact the CF-Y5 is actually considerably lighter than many notebooks with smaller screens that we’ve reviewed lately, like the Sony VAIO C2SL with its 13.3in screen. With dimensions of 310 x 245 x 45mm at its largest points, the CF-Y5 isn’t even that large. In fact the height is dictated by the fact that the lid has a cushioned area to protect the screen, thus allowing the CF-Y5 to withstand up to 100kg of pressure when closed. Like the other ToughBook Executive machines, the CF-Y5 is also happy with a drop of 30cm – not as good as the fully rugged machines that are good for a drop of around a metre, but at least you’ll be safe if you happen to throw it down on your desk a bit carelessly. 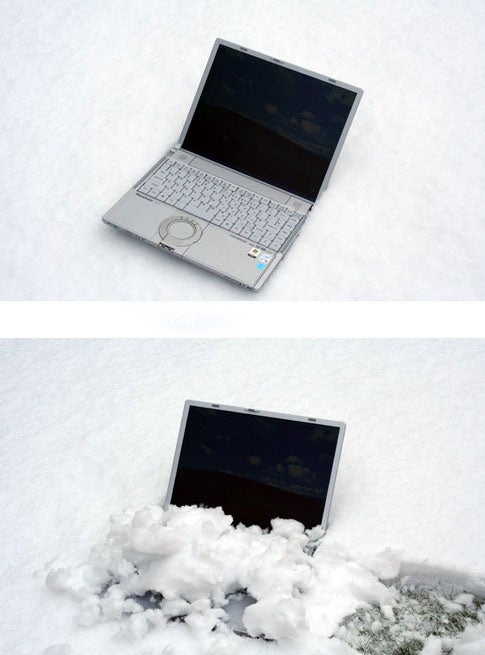 At the right side of the chassis you’ll find an Ethernet port, a modem socket and two USB 2.0 ports. At the front is the power switch, which glows green when the notebook is on , in contrast to most which glow blue. There’s also a hardware switch for the integrated wireless adapters. Finally there’s a switch that opens up the integrated DVD writer. Just like the CF-W5, when the switch is flicked, the right side of the wrist rest pops up to reveal the drive inside. While I was in Japan last week Panasonic showed me that this isn’t just a gimmick – by doing away with a tray or slot loading mechanism, it has managed to reduce the weight of the optical drive considerably. Also, if you push the eject switch the other way, it will power down the optical drive to save battery life. 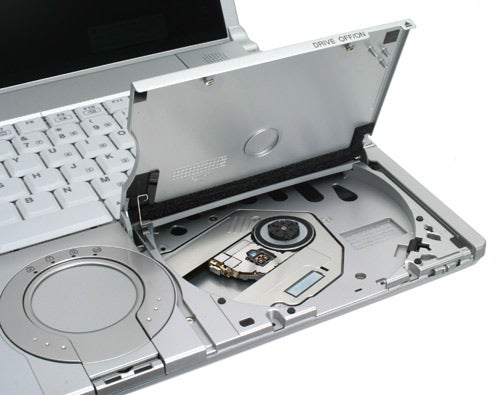 At the left is a Type II PC Card slot with a spring loaded flap covering it. This is a far better solution than using a spacer, which is prone to getting lost when the slot is in use. Below the PC card slot is an SD card slot, which will be handy if you happen to have a digital camera that uses this ever more popular format. Also on the left is a D-SUB port, the power socket, headphone and microphone sockets, and a connector for the optional port replicator.

Inside, this is the first ToughBook Light, I mean ToughBook Executive model that I’ve seen with a dual core CPU. There’s an Intel Core Duo L2400 chip, which is a low voltage part that runs at 1.66GHz. Panasonic has chosen the low voltage CPU to increase battery life – definitely a decision that has paid off. And even though 1.66GHz is hardly top end by today’s mobile CPU speeds, it is more than adequate for the majority of applications that you’re going to use on a notebook – I certainly haven’t felt the CF-Y5 struggling while I’ve been using it.

If there is a weak point it’s the memory complement – with only 512MB of RAM and 8MB of that allocated to the integrated graphics, you may find things slowing down a bit running applications like Photoshop, and I wouldn’t even think about installing Vista. Of course there is an empty SODIM slot, so you can easily upgrade the memory – my advice would be to specify a RAM upgrade at point of purchase.


The 60GB hard disc is somewhat modest by today’s standards too, but I don’t think that a business notebook really needs that much storage these days. Often users are working on files stored on a central server, rather than keeping them on their local hard disk. In fact, I’d go as far as saying that I’d happily replace the 60GB hard disk with a 32GB solid state disk if I had the choice. Although that would add a considerable amount to the purchase price.

Wireless connectivity is also well catered for with an integrated Intel 802.11a, b and g Wi-Fi adapter. Bluetooth is also part of the package, so you’ll be able to synchronise with your phone or even use a wireless headset for making VoiP calls. And if you need to be connected from anywhere, you can specify the CF-W5 with an integrated HSDPA module, although this will add £311 to the overall cost.

When it comes to performance I personally rate battery life higher than processing power, and the CF-Y5 definitely didn’t disappoint me. Running MobileMark 2005 the CF-Y5 managed a truly impressive battery life of eight hours 19 minutes, making this one of the few notebooks that really can put in a full day’s work away from a power socket. Even the performance rating under MobileMark was pretty good at 201, only 20 points behind the HP nc6400, and adding some extra memory would probably close that gap. You’ll be able to watch pretty much any movie on battery power too, since the CF-Y5 turned in a DVD playback time of four hours 42 minutes – even Peter Jackson can’t match that.

I can’t think of many other notebooks that can survive an average person (unless you live somewhere where the average is over 100kg) standing on it, without worrying about the screen breaking. Likewise, not too many machines will survive a full mug of water being thrown all over the keyboard while it’s switched on. Not to mention the fact that I wouldn’t have had the guts to bury any other notebook in the snow. And there’s no doubt that Panasonic’s R&D has paid off in the weight saving department too, because 1.5kg is pretty damn light for a 14.1in notebook – compare that to the HP nc6400 which weighs 2.3kg.


So, the ToughBook CF-Y5 is expensive, but it’s also one of the best all round notebooks I’ve ever used. To create something this robust, with a great screen, class leading battery life and a weight more akin to 12.1in ultra-portable machines is an achievement that Panasonic should be very proud of.