I first saw this new ToughBook back in September when Panasonic invited me out to its facility in Wales. Even now, this is still a pre-production unit, rather than a full retail sample, but it’s pretty close to the final build. Like the ToughBook CF-W4 before it, the CF-W5 is an ultra-portable semi-rugged notebook – so you’re not going to be throwing it onto the ground, standing on it and dousing it in water, like you would a ToughBook CF-29! But that’s not what this little notebook is all about, the CF-W5 is designed to be thin, light and durable enough to withstand the daily grind. 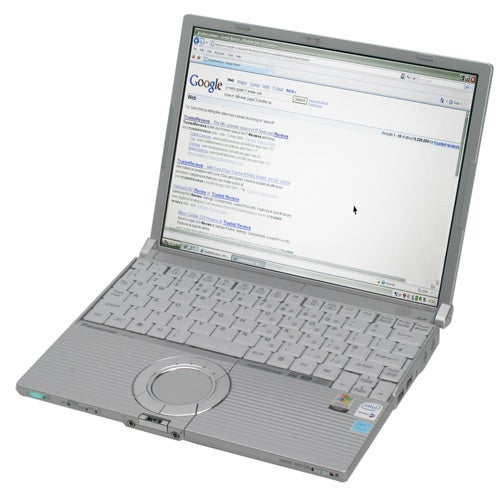 Whether or not you’re looking for a semi-rugged notebook, the CF-W5 is pretty appealing. Like its predecessors it looks quite stylish, finished in matt silver. The lid is ridged and constructed from magnesium alloy to afford some protection to the screen underneath it – the result is a slightly unusual, but nevertheless attractive look to the notebook when it’s closed. Unlike the more serious ToughBooks, the ports and connectors are not protected by waterproof rubber bungs, but that’s not really surprising for an ultra-portable machine that weighs less than 1.3kg.


Despite its svelte dimentions and light weight, the CF-W5 can still withstand a fall from 30cm. Obviously that doesn’t mean that you can knock this machine off a tabletop and expect it to come out of the experience unscathed as you would a CF-29 or CF-18, but it does mean that when you unceremoneously throw it down on your desk, you’re not going to cause any damage. Most important is that the hard disk is still protected, so you shouldn’t lose any important data if you tend to be a bit rough with your laptops. So what you’re getting with the CF-W5 is a notebook that can withstand a knock or two, but which won’t weigh you down as a result. 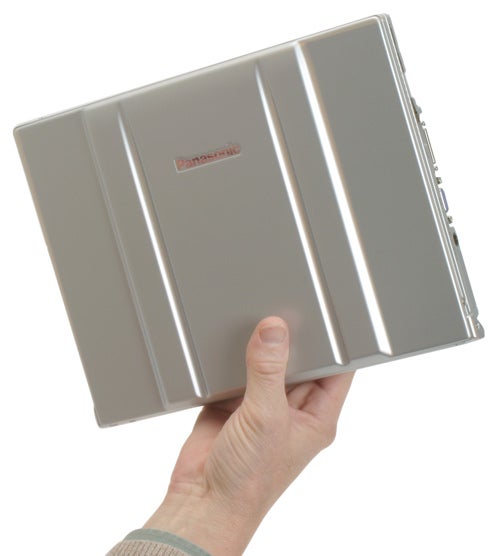 Opening up the lid reveals a 12.1in screen with a resolution of 1,024 x 768. The resolution is a bit of a give away to the fact that the screen utilises a 4:3 aspect ratio, rather than the more common widescreen formats. This is a bit of a shame, since most ultra-portable notebooks these days will sport resolutions of 1,280 x 768 or 1,280 x 800, with the truly tiny Sony TX series machines sqeezing in 1,366 x 768 pixels. The result is that the CF-W5 not only lacks some desktop real estate compared to the competition, but it’s also physically larger as a result of the traditional aspect ratio. To be fair, ToughBooks aren’t what you’d refer to as consumer notebooks, and a number of manufacturers have told me that corporate users often prefer a 4:3 display rather than a widescreen one.

Putting the aspect ratio to one side, the screen is a very good with surprisingly vibrant colours considering that Panasonic doesn’t employ a high contrast coating. One caveat to that statement is that it’s dependant on you viewing the screen head on, as there is noticable wash out in the vertical plane, although the viewing angle in the horizontal plane is superb. Realistically it’s the latter that is more important, since if you’re ever showing someone something on your notebook, they’re usually next to you rather than above or below you. 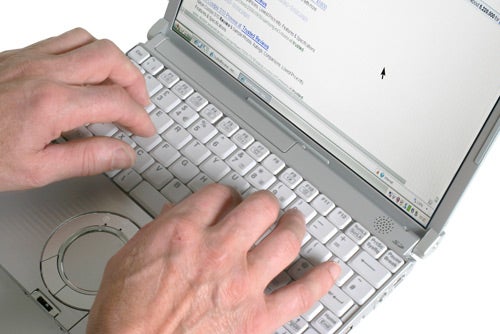 The keyboard may be too small for some users, but I had no problem typing on it. The review sample that I received had a US spec keyboard, but it was a pre-production unit and the majority of manufacturers tend to have US keyboards on their prototypes. If there’s one major annoyance with the keyboard, it’s the tiny Return key, which takes some getting used to. The Spacebar is also tiny, but I didn’t seem to have any problems hitting it every single time. Keyboard shortcut junkies will be glad to see the Ctrl key located at the bottom left where it should be – many notebook manufacturers opt to locate the Fn key in this position, which can be counter intuitive.


Key sizes and positioning aside though, the keyboard on the CF-W5 has a pretty good feel to it. It’s clear that Panasonic has constantly developed the keyboard in the W series ToughBooks, since when I looked at the CF-W2 many years ago there was a disturbing amount of flex evident when typing. Thankfully there’s no such issues with the CF-W5 and typing for extended periods is not a problem. 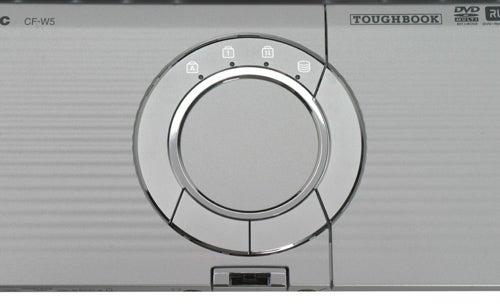 Panasonic continues with its decision to use a round touchpad for the W series ToughBooks and opinion in the TrustedReviews office is split on this. It definitely looks distinctive, but I generally find the odd shaped touchpads are not as easy to use as their more traditionally shaped cousins. That said, Panasonic seems to be an exception to that rule, and I’ve had no issues using the round touchpad on this machine. There is a metalic silver ring surrounding the touchpad which includes indicator lights for hard disk activity, Caps Lock, Num Lock and Scroll Lock. The bottom section of the ring houses the two selector buttons.

The CF-W5 has the same party trick as previous W models, in that the optical drive is hidden under the right side of the wrist rest. But unlike most optical drives which implement an ejecting tray or a slot loading mechanism, Panasonic has equipped the W series ToughBooks with a top loading device. Flicking the eject switch results in the whole right hand side of the wrist rest flipping open to reveal the hidden optical drive. The CF-W5 ships with a DVD writer, so you’ll be able to backup any important data, or offload non-essential files if you start running low on hard disk space. 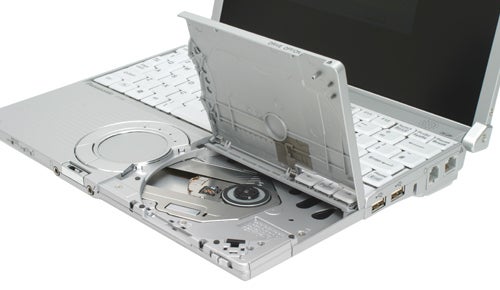 The ability to free up space on the hard disk may be useful, since you only get a 60GB drive. I know it seems a bit churlish complaining about 60GB, but you can get larger 1.8in drives these days. Other internal components comprise an Intel Core Solo U1400 ultra low voltage CPU running at 1.2GHz and 512MB of RAM. The latter is a little disappointing as I think notebooks should ship with at least 1GB of memory these days, although at least there is an empty SODIMM slot for augmenting the memory. The memory issue is compounded by the fact that the Intel Integrated graphics suck up at least 8MB, so you’re only getting 504MB of system memory.


Being a Centrino branded machine there’s an Intel 802.11 a/b/g Wi-Fi adapter inside, so you won’t have any problems hooking up to any wireless networks that you encounter. Conspicuous by its absence is Bluetooth, so don’t expect to be able to connect the CF-W5 to your mobile phone or even a Bluetooth enabled digital camera. 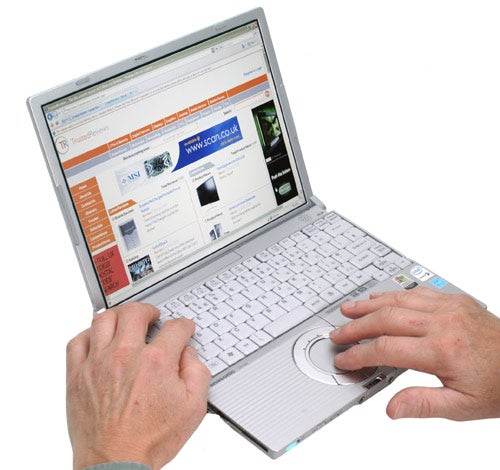 One of the big announcements back in September was that the CF-W5 would be available with an integrated HSDPA module, but unfortunately my early review sample didn’t include this. The HSDPA module is an option which will set you back around £300 extra, which is a fair old whack considering that you can pick up a data card for nothing. To be fair though, the cost of a data card is subsidised by the network operator, but with an integrated module the cost of the hardware falls to the consumer.

There’s quite a bit squeezed into the slim chassis – on the right you’ll find an Ethernet port, modem socket and two USB 2.0 ports, while the left is populated with the power socket, D-SUB port, expansion port, PC Card slot and an SD card slot. Unusually the front is pretty well stacked too with the eject switch for the DVD writer, a hardware switch for the wireless, headphone and mic sockets, and finally the power switch that glows green when the notebook is on.

Battery life is very impressive with the CF-W5 lasting six hours and 41 minutes under Mobile Mark. I couldn’t get a performance score from Mobile Mark, since no matter how hard I tried, I couldn’t stop the CF-W5 from going into standby when the battery got down to one per cent. Of course this is no bad thing for the end user, since that’s exactly how you’d want your notebook to behave, but I am still baffled as to why it insisted on going into standby even though it was configured not to. You could quite happily use the CF-W5 to watch movies too, since it lasted five hours 36 minutes playing back a DVD!


The SYSmark score of 168 is slightly up on the previous model’s 157, but this could easily be improved by adding more memory. For some reason I couldn’t get PC Mark to run at all, but as I’ve already mentioned, this is a preproduction unit and I’d hope that this wouldn’t be the case on a retail model.

With a price of £1,680 including VAT, the ToughBook CF-W5 is far from cheap and finds itself on a par with Sony’s excellent VAIO TX3XP, which has a widescreen display with a higher resolution, larger hard disk and a staggering nine hours battery life. Of course the Sony isn’t semi-rugged like the CF-W5, so if you are planning on being pretty rough with your ultra-portable notebook, the W5 is still worth a look. However, I think that Panasonic needs to refresh its thin and light ToughBook line and offer something with more screen resolution and a dual core CPU, and luckily that’s exactly what it’s going to do. The CF-Y5 will be slightly larger due to the larger display, but it will also feature a dual core processor – I should have a review sample soon, so watch this space.


The ToughBook CF-W5 is pretty much an evolution of the CF-W4, which is not necessarily a bad thing. However, if you definitely aren’t planning on dropping your notebook on the desk from 30cm, there may be better options out there. That said, the W5 is still slim, light and well built. The battery life is also very impressive and the option of an integrated HSDPA module is something that the competition can’t offer yet.