When it comes to rough and ready notebook computers, Panasonic ToughBooks rule the roost. Fully rugged machines like the ToughBook CF-30 really can survive prett much anything you throw at them. In fact when I reviewed the CF-30 I drove a car over it, just to test its hard man credentials. But even that couldn’t faze Panasonic’s top of the range ToughBook. Now I’m looking at the latest iteration of the CF-74, which has been updated with Intel’s Santa Rosa platform. 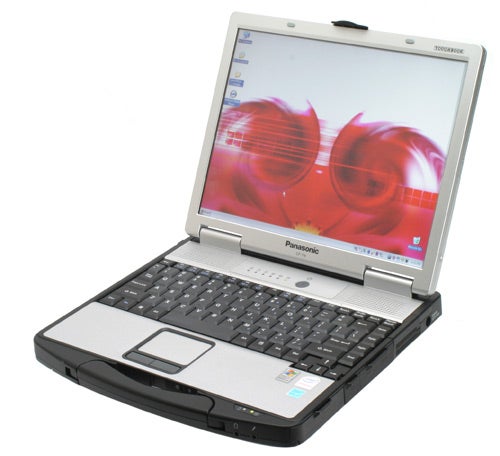 Although the CF-74 is only classed as semi-rugged, it can still survive its fair share of knocks, bumps and drops. In fact the last ToughBook CF-74 that I looked at didn’t seem to have any problem with being dropped from around a metre, as the image below highlights. Panasonic states that the data on the hard disk will remain safe even if the unit is dropped from 90cm, so it’s good to see that there’s a little headroom in there, in case your desk is a little bit higher than that.


Despite not being a fully rugged model, the CF-74 still looks the part – its magnesium alloy case is finished in brushed silver and the solid metal handle makes it easy to carry, while also adding to the tough aesthetics. One of the best aspects of the ToughBook range is the carrying handle, since it negates the need for a dedicated notebook bag. “But how will I carry the power supply?” I hear you cry – believe me, that’s not a problem when you consider the battery life that this machine offers. Panasonic has always managed to squeeze impressive battery life out of the ToughBook range and the CF-74 is no exception. Running Mobile Mark 2005, the CF-74 managed a battery life of seven hours 45 minutes, which is very impressive by anyone’s standards. That means that you should be able to leave the power brick at home, without worrying about running out of juice during the day.

The CF-74 also has doors protecting the majority of ports and connectors, while the keyboard is spill resistant. That doesn’t mean that you should use this machine out in the pouring rain, as you would a CF-30, but it does mean that you won’t have to worry about spilling the odd glass of water on it, or using it in a dusty environment. On the whole, this notebook is close to perfect for the majority of field workers, unless you absolutely, positively need your computer to keep working, no matter how extreme the conditions.

Like all ToughBooks to date, the screen on the CF-74 sports a 4:3 aspect ratio, rather than a widescreen display. That said, I should be getting my paws on the new CF-52 soon, which will be the first widescreen ToughBook. The screen on this CF-74 differs somewhat from the previous model I looked at, since it’s a touch screen. I’m actually quite a fan of the touch screens that Panasonic uses for its ToughBook range. You may think that a touch screen is a pointless gimmick, but once you’ve gotten used to just prodding icons and buttons with your fingertip, you won’t want to go back again. Also, since even the CF-74 can operate when reasonably wet or dirty, it will be a lot easier to navigate Windows using a touch screen than the touchpad. That’s not to say that the touchpad isn’t good, because it is, proving to be both responsive and accurate. 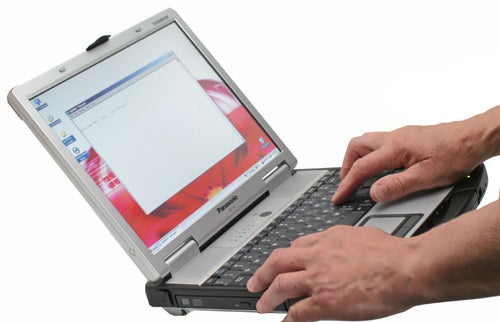 The screen sports a native resolution of 1,024 x 768, which is fairly conservative for a 13.3in display, but there is good reason for this. If you’re going to be stabbing buttons and dragging windows around with your fingertip, you don’t want the resolution too high. Also, because Panasonic is assuming that this machine will be used in a number of environments, including outdoors, the larger icons afforded by the lower native resolution will make viewing the screen and interacting with it easier for the user.


The screen is very bright, making the CF-74 an ideal tool for use in bright sunlight, although the touch screen coating does mean that colours are not as vivid and vibrant as they otherwise would be. Touch screen coatings can also affect viewing angles, but the CF-74 seems to suffer from no such issues, so you shouldn’t have any problems if you need to show others data on your notebook. 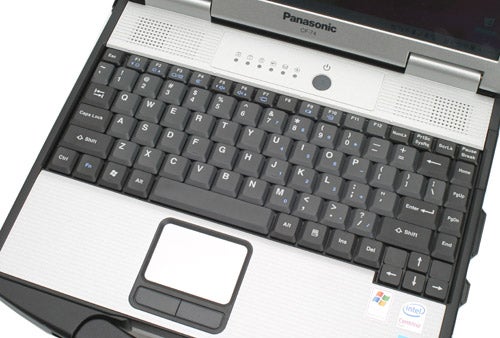 Just like pretty much every ToughBook I look at, the keyboard has a US layout rather than UK. This means that the Enter key is smaller that I’d like, but it doesn’t take too long to get used to this anomaly, and I never find myself missing a carriage return when typing at speed. On the plus side, the Ctrl key is exactly where it should be, in the bottom left corner, and the cursor keys are dropped away from the main keyboard for easy access.

The keyboard does have a very solid feel to it – in fact there wasn’t the slightest hint of flex, no matter how hard I typed. Having been to the ToughBook factory in Japan, I’m not really surprised by this, since Panasonic puts all its ToughBook models through significant amounts of torture before signing them off. 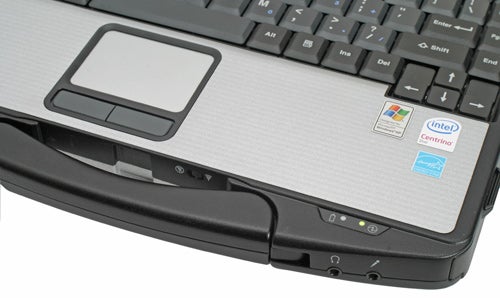 As mentioned earlier, this is the first ToughBook that’s based on the Santa Rosa platform. As a result the internals are based on an Intel 965 chipset, complete with an 800MHz FSB. Plugged into the chipset is a latest generation Core 2 Duo Merom CPU – a T7300 – running at 2.0GHz across both cores. There’s 1GB of RAM, which is unusual these days, with most notebooks shipping with 2GB. That said, because the CF-74 is running Windows XP rather than Vista, 1GB RAM is perfectly adequate. If you want to add more RAM it won’t be difficult – there’s an empty slot waiting under a cover mounted on the base of the notebook. 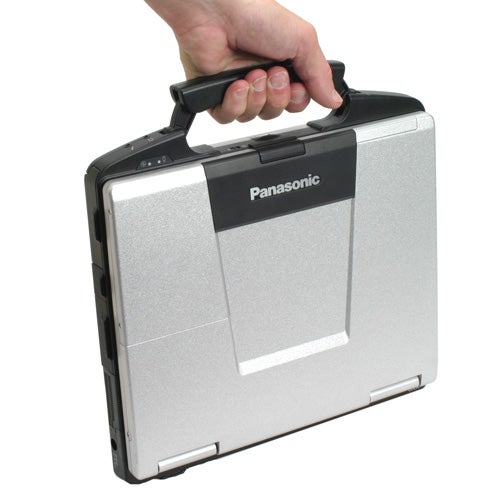 There’s an 80GB hard disk taking care of storage, which isn’t particularly capacious considering that notebook hard drives go all the way up to 250GB these days. That said, with a ToughBook you’re not just getting a hard disk, you’re also getting the shock resistant caddy that it lives in. A huge amount of research and development has gone into the ToughBook HDD caddies, which is why Panasonic can offer that 90cm drop guarantee for your data. There’s also a built-in optical drive – in this case a DVD-ROM/CD-RW combo drive, although you can specify a DVD writer if you need one.


As with most ToughBooks, connectivity is well catered for. Although this review sample doesn’t sport integrated HSDPA, it is an option for anyone that wants it – after all, Panasonic pioneered wireless WAN with its early GSM connectivity. What you do get is an Intel Wi-Fi adapter – a necessary part of Centrino branding – and integrated Bluetooth. There’s also a Gigabit Ethernet controller and a 56K modem, which pretty much covers all the bases. 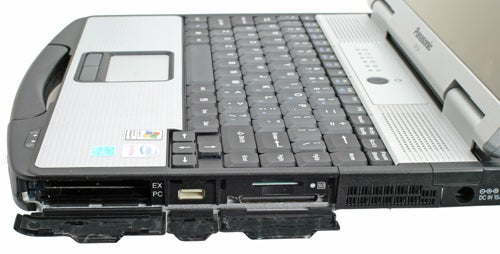 On the right of the chassis you’ll find the power socket, which surprisingly isn’t covered. The first fold down flap hides an SD card slot and a port replicator connector. Next along is a small flap hiding a single USB port, and next to this is a door behind which hide both PC Card and Express Card slots.


The front is dominated by the pull out handle and the solid metal catch that secures the lid. To the right of the handle are headphone and microphone sockets, while underneath the handle is a hardware switch for the wireless adapters.

The left of the chassis houses the pull-out hard disk caddy and the optical drive, along with another single USB port. Most of the rear is taken up by the battery, but there is a single flap that hides a serial port, D-SUB connector, Ethernet port and modem socket. Finally on the underside, you’ll find a little slot where the stylus lives – in case you think that prodding the screen with your finger is a little uncouth. 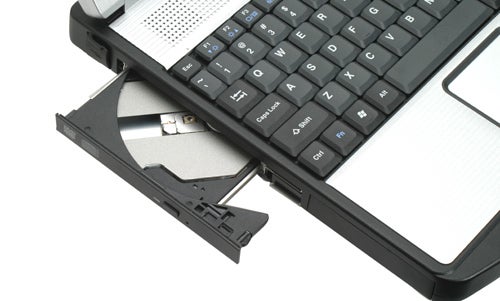 When it comes to performance, this latest CF-74 is definitely a fair bit quicker than the previous model. Much of this will be down to the CPU, chipset and memory. The previous CF-74 had a 1.83GHz Core Duo, a 667MHz FSB and 512MB of memory – the chip in this machine isn’t just clocked faster, but it also has double the cache at 4MB instead of 2MB, while the 800MHz FSB and twice the memory also give it a boost.


The older CF-74 did manage slightly more battery life at 479 minutes compared with 465 minutes, but that’s to be expected when you factor in that this latest CF-74 is a much faster machine. Ultimately, losing 14 minutes overall battery life is very acceptable considering the beefier components. 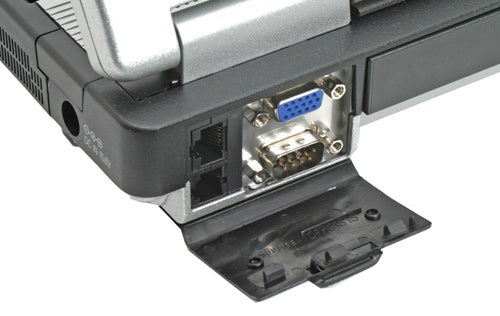 At 2.7kg, the CF-74 is lighter than you might expect, and over a kilo lighter than its big brother, the CF-30. Size wise, the CF-74 measures in at 303 x 293 x 60mm (WxDxH), so it’s reasonably large, but as already mentioned, the carrying handle means that you won’t need a separate bag.


With a price of £2,450 including VAT, the CF-74 isn’t cheap, but then ToughBooks never are. What you’re getting for that money though, is a notebook that should be able to survive anything that you or your workforce throws at it. As I said before, you can’t drive a car over it, but it surprises me how rarely that need arises.


Panasonic may describe the CF-74 as a semi-rugged notebook, but it’s far more robust than any other semi-rugged unit I’ve come across. The solid construction, carrying handle and great battery life make it a very attractive proposition for any company that regularly sends staff out into the field. Yes, it’s expensive, but as always with a ToughBook, you either need what it has to offer, or you don’t.