Panasonic has been making notebooks for a long time, but despite this you may not have come across the ToughBook brand before. The reason for this is that Panasonic models tend to attract a certain type of buyer, a buyer that is more concerned with durability than design and performance. To get an idea of who the ToughBooks appeal to, next time you see a BT engineer working on a junction box in the street, take a look over his shoulder and it’s a near certainty that he’ll be working on a ToughBook. 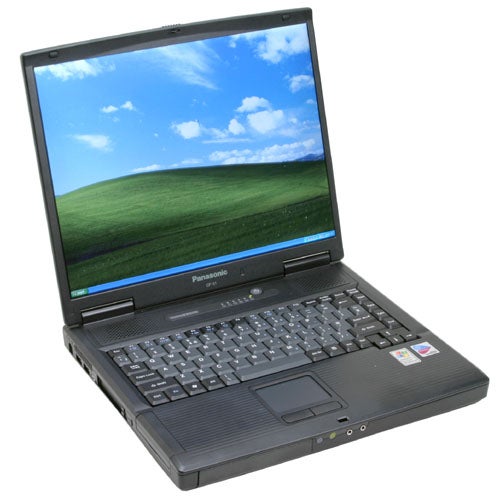 As the name suggests, ToughBooks are built to be, well, a bit tougher than your average notebook. In fact the fully rugged units sported by field engineers are built to withstand impact, water, dust ingress and just about any other environmental hazard that mobile computers might be subjected to. But not everyone wants to carry around a large, heavy, metal clad notebook, no matter how strong it might be. With this in mind, Panasonic created semi-rugged ToughBooks.


The semi-rugged ToughBook may not be impervious to water, or be able to withstand a car rolling over it, but it does give the user a bit of extra peace of mind without being too oversized or heavy. The ToughBook CF-51 is Panasonic’s latest semi-rugged notebook and at first glance it doesn’t look too different to any other notebook. OK, so it’s a little larger than most, and weighs more than some, but on the whole it just looks like a notebook. 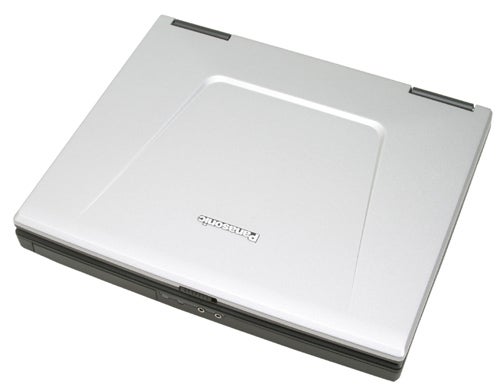 But it’s what’s beneath the skin that sets the CF-51 apart from many notebook computers. To start with both the base and lid are reinforced with magnesium alloy to protect the screen and internal components. It’s this strengthening that allows Panasonic to guarantee that the CF-51 can withstand a drop from a height of 30cm. That might not sound like much, but on the occasion when you drop an expensive piece of kit, you’ll notice that it seems to take an eternity before it hits the ground, probably never to work again – quite simply, any kind of shock protection is a good thing.

Of course for a notebook to remain operational after being dropped, the hard disk needs to be protected. To facilitate this, the hard disk in the CF-51 is cocooned in an impact and vibration absorbent enclosure – it’s also easily removable in case you’re very paranoid about losing your data. In fact pretty much everything is modular in the CF-51 – push a little switch and the hard disk caddy slides right out of the front, push another one and the battery will slide out, while the optical drive will slip free from the chassis with similar ease. So, no need to get out the screwdriver for this machine then. Well, unless you want to add memory to the free SO-DIMM slot. 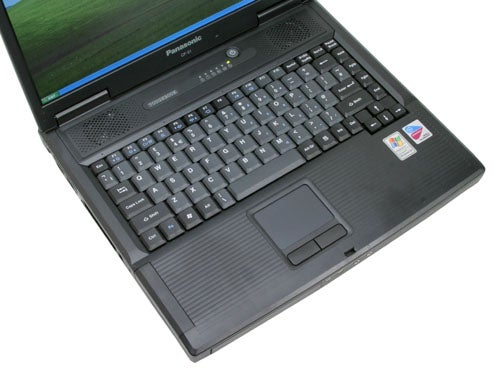 Despite being a rugged notebook, the CF-51 looks good. The magnesium alloy lid looks good and the single Panasonic logo suits the minimalist styling. Apart from the matt silver lid, the rest of the notebook is finished in black – not particularly inspiring, but not offensive either. Lifting the lid reveals a fairly standard keyboard and touchpad layout. The keyboard is a bit of a mixed bag – most of the keys are a decent size, but bizarrely the Return key is tiny. I always find it strange when a manufacturer decides to reduce the size of the Return key, since you really don’t want to be missing it when you’re typing at full speed. Likewise, the Backspace key has also been reduced – another often used key that’s been made harder to strike. On the plus side, the cursor keys are set apart from the rest of the keyboard, and the Ctrl key is in at the bottom left, right where it should be.


The touchpad works well enough and is positioned far enough from the Spacebar to avoid accidental cursor repositioning. Although I prefer trackpoints, I can only assume that Panasonic has found touchpads to be more robust and therefore more suited to the ToughBooks.

The screen is a superb example sporting an impressive 1,600 x 1,200 resolution. This is more desktop real estate than the majority of desktop monitors provide and certainly makes for a very pleasant working environment. This is only the second notebook that I’ve ever seen with a 1,600 x 1,200 display, the other being an IBM ThinkPad, but I wish that other manufacturers would follow suit. There’s no fancy high-contrast coating on this screen, but then a ToughBook isn’t really meant to be used for gaming or movie watching. As notebook screens go, this is one of the best I’ve seen, coming second only to the handful of 1,920 x 1,200 widescreen examples that I’ve encountered. 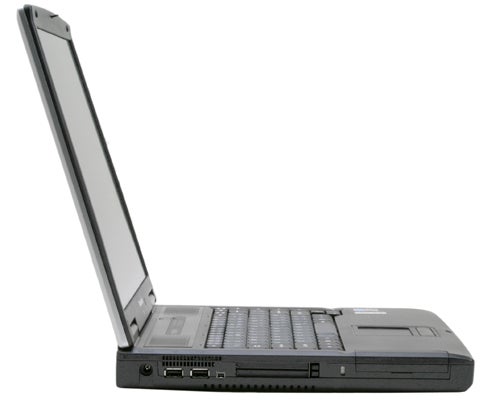 Inside the CF-51 is a 2GHz Pentium M CPU backed up by 512MB of memory. As already mentioned there’s a free SO-DIMM slot, so you can augment the memory post purchase without the need to discard any modules. There’s an 80GB hard drive which should keep you happy for a good while.


Being a Centrino branded machine there’s obviously an Intel branded WiFi adapter thrown in, and it’s good to see that Panasonic has gone for the top end card that supports 802.11a, b and g. This complements the integrated Gigabit Ethernet adapter that will give you lightning fast network connectivity, if you have a Gigabit switch in your office of course. Bluetooth is conspicuous by its absence however. 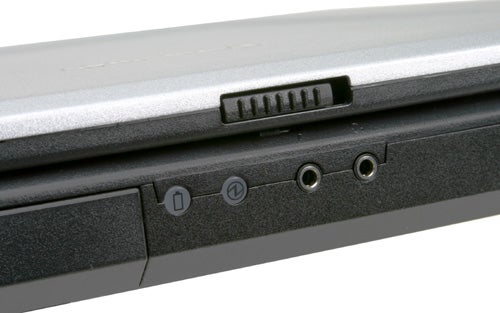 Taking a look around the chassis you’ll see that the right side is dominated by the DVD-ROM/CD-RW combo drive. I don’t often see these anymore, with pretty much every notebook I come across fitted with a DVD writer these days. The front is adorned only by the headphone and mic sockets, battery and charge indicator lights and the modular hard disk caddy.

On the left there are two Type II PC Card slots, two USB 2.0 ports, a four-pin FireWire port and the power socket. Surprisingly, the rear sports the most features, despite the fact that most notebooks these days are pretty sparse at the back. Here you’ll find serial, parallel and D-SUB ports, a modem socket, an Ethernet port and a PS/2 port. Clearly Panasonic feels that legacy support is important to ToughBook users, who may have specialist equipment that needs to be connected via archaic methods such as serial ports.

Performance wise the CF-51 turned in some pretty good results. Running MobileMark turned in a battery life of over three and a half hours – not the best I’ve seen but definitely respectable. Running a DVD movie turned in a time of just over three hours, but I doubt that too many ToughBooks would be used for such duties. The overall SYSmark 2002 score of 225 isn’t too far off the 241 scored by the similarly specified Samsung X50, which isn’t a semi-rugged device. Ultimately, the CF-51 will handle pretty much anything you’re likely to throw at it, which it good since the high resolution screen lends itself to multi-tasking.


This version of the CF-51 is so new that it’s not actually on sale yet, but Panasonic has quoted me a street price of £1,551 from 24 Store. That’s not a bad price considering what you’re getting, but it’s obviously more expensive than a similarly specified non-semi-rugged notebook. With machine like the CF-51 you’ve really got to ask yourself if you’re willing to pay for the comfort of knowing that your notebook can withstand the odd knock, or even drop. If you are worried about both your investment and your data security, then the CF-51 will look attractive.


If you’re worried that you might damage your notebook, the idea of a semi-rugged device makes sense. The ToughBook CF-51 has a lot going for it, especially the excellent 1,600 x 1,200 display, although the bizarre shrunken Return and Backspace keys are a concern. Also, the lack of integrated Bluetooth is a real disappointment these days, especially for a brand new model. Of course you can find a regular notebook with a better specification for less money, but it comes down to your priorities – and how clumsy you are I guess.