And the award for bravest TV brand of the 2014 CES goes to [drum roll please]: Panasonic. First for stating unequivocally during its opening press conference that it was going to deliver picture quality from its new LED TVs as good as that of its legendary plasma TVs, and then for having the AV balls to run a demo (in a blacked out room, no less) of its new flagship LCD TV panel running head-to-head with one of last year’s rapturously received ZT65 plasma screens (ZT60 in the US).

Serious home cinephiles will immediately appreciate the importance of this head-to-head. After all, the ZT65 was deemed the stuff of picture quality dreams by most reviewers in 2013, so if the new LCD panel can match that it’s basically doing stuff that LCD technology really has no right to be able to do. 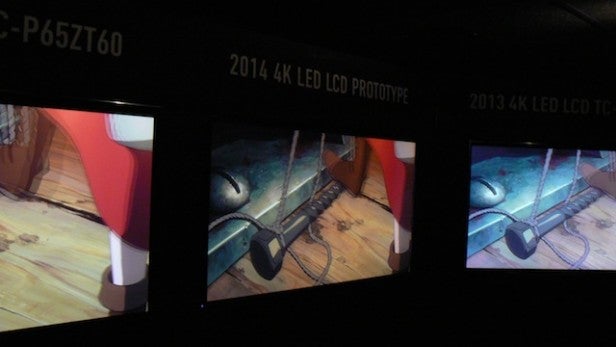 Before getting into how the head-to-head played out, let’s cover a bit of background on the new ‘Studio Master’ LCD panel Panasonic is hoping will make its ‘plasma-beating’ claims come true. First, we’re having to call it merely a panel at this stage since Panasonic hasn’t yet given it a finished TV model number. However, the brand confirmed that the panel will definitely going into a product in 2014.

Next, the panel is lit by a direct LED lighting system rather than the edge LED system Panasonic has previously used with its LCD TVs. This is, of course, hugely significant, since direct LED lighting – where the LEDs are positioned directly behind the screen – can deliver a much more contrast-rich picture than edge LED lighting. That’s especially true when partnered, as it is in Panasonic’s new panel, with a local dimming system where different sections of the LEDs can have their light outputs controlled individually. 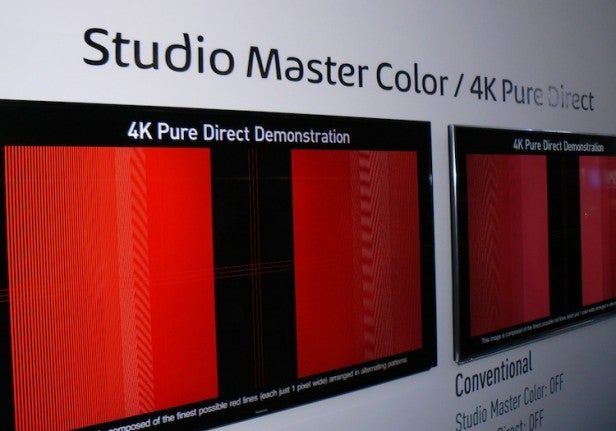 The combination of the new panel’s colour and shadow detail technologies crucially means that it’s able to retain colour tones to the key Rec 709 standard even when running with a low light output – something normal LCD TVs find all but impossible to achieve.

Other key features of the new LCD panel include the new Info Bar and My Stream components of Panasonic’s smart TV system. The Info Bar is a simple but effective information bar that pops up on screen when the TV detects a person’s heat signature entering the room, showing such tidbits as the local weather, the local time, highlights from your list of recommended TV shows, and video/voice/photo messages from loved ones.

My Stream is a new way of presenting recommended programmes selected from upcoming TV listings based on an analysis of your viewing preferences. Up to 100 titles appear via a scrolling ‘ribbon’ of tiles, with all the windows playing moving video clips on this flagship model (on lesser models only the highlighted window will play moving video).

The blacked out demo room for the new panel was laid out with the ZT60 on the left, the new panel in the centre and one of last year’s WT600s over to the right. The screens were simultaneously fed a combination of Japanese anime and (in yet another example of extreme bravery on Panasonic’s part!) the remarkably dark sequence at the start of Chapter 12 of the Harry Potter and the Deathly Hallows Part 2, where Voldemort surveys Hogwarts from a hill at night with his army behind him. And what we saw from the new LCD panel was actually pretty amazing.

Shock part one concerns black level response. The new panel really did seem to match the black level response of the ZT60/65 – a black level response which, let’s not forget, was the first we’d deemed good enough to finally oust Pioneer’s KURO plasmas from their black level throne. This is all the more hard to comprehend given that the new LCD panel uses an IPS panel design – a design that’s not generally been associated with spectacular contrast in the past. The WT600 by comparison looked very washed out and grey. 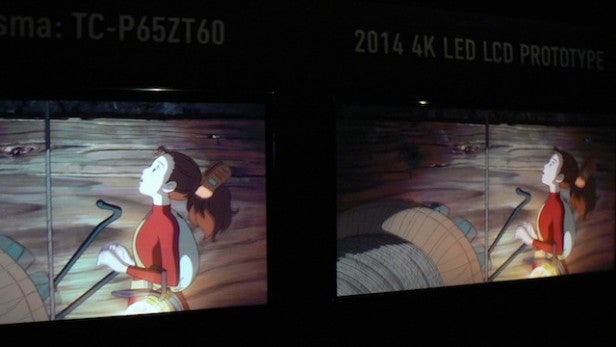 The new panel also matched the ZT60 pixel for pixel when it came to shadow detail. This is if anything even more remarkable than the black level response achievement because it proves that the new panel isn’t just unsubtly and unintelligently taking out all light from dark areas of the picture to achieve its deep black levels.

And then there’s the new panel’s colour response. As promised colour tones really do retain their richness, balance and naturalism even during the darkest moments of the Harry Potter sequence. So much so that they actually look slightly more dynamic than those of the ZT60/65 – a comparison that holds good during bright footage, too.

It’s not just with colour saturations that Panasonic’s new LCD panel actually outguns the ZT60/65 either. It also delivers dark scenes less noisily, with none of the green speckling noise you can see on the ZT60/65 if you get up close. Talking of noise, the new LCD panel also runs essentially silently avoiding the fan noise output by the ZT60.

Although we’re not sure what motion processing settings Panasonic was using for the TVs in its demo, from what we saw the new LCD panel reproduced motion – especially camera pans – with markedly less judder than the ZT60/65 did.

On the flip side, the new panel lost a little resolution with fast moving objects while the ZT60/65 did not. The ZT60/65 also delivered a wider viewing angle without losing colour saturation or contrast than the new LCD panel, though the IPS panel in the new model provides a markedly wider effective viewing angle than the VA-type panel inside the WT600.

As we finally emerged blinking into the bright lights of the main Panasonic stand, our minds were reeling over what we’d just witnessed. Before entering the booth we’d thought maybe Panasonic might be able to match plasma in some areas with its new flagship LCD panel. But the fact that this panel had just seemingly not only matched but even outgunned the mighty ZT60/65 in most areas of picture performance was just not something we’d been prepared for.

Obviously we must remember that what we were shown wasn’t a completely finished TV sample. But if anything you’d expect picture performance to improve rather than get worse in the coming months.

In short, Panasonic appears to have given itself a fighting chance of genuinely delivering on its outlandish claims to have matched plasma quality with its latest flagship LCD TVs. In any case, if this is what Panasonic can do within just a year of focussing more of its R&D activities on LCD, hopes have suddenly become seriously high for what thrills the brand’s plasma-free future might hold.

Next, read John’s thoughts on the Philips Android TV