The Panasonic SoundSlayer is a great soundbar for gamers who aren't after a more complete surround sound experience, and simply want to bulk up their existing setup with a few extra bells and whistles. From that perspective, this is well worth considering.

Soundbars are often highlighted as devices that heighten the immersion of film and music soundtracks, but seldom have we seen one dedicated to gaming until the Panasonic Soundslayer.

Panasonic hopes to address this rather glaring gap in the market, working alongside major developers to produce a soundbar which is impressive and surprisingly generous in the features it provides at its price, although some might prefer to stick with headphones for a more subdued approach, and I honestly couldn’t blame them.

The Panasonic SC-HTB01EB SoundSlayer provides a multi-faceted audio experience which is immensely satisfying while providing immersive Dolby Atmos alongside fairly competent Bluetooth capabilities for connecting to phones, laptops and an assortment of other devices. It also features specific modes which are geared towards gaming, taking advantage of the unpredictable and punchy audio that comes from modern blockbusters.

While the Soundslayer won’t stand a chance against some of the market’s more expensive soundbar offerings, it’s a very tempting proposition for regular gamers looking to enhance their audio experience. As a relative newcomer to such products myself, I came away thoroughly impressed and somewhat curious about what I’d been missing after so many years.

The SoundSlayer Gaming speaker, also referred to as SC-HTB01 was released in late 2020 for £284/$299/€299/CAD$399. As far as we know there’s no date for an Australian release. It is available as a special Final Fantasy XIV edition that features a dedicated design and a special RPG sound mode optimised for FF XIV. That versions costs £299. 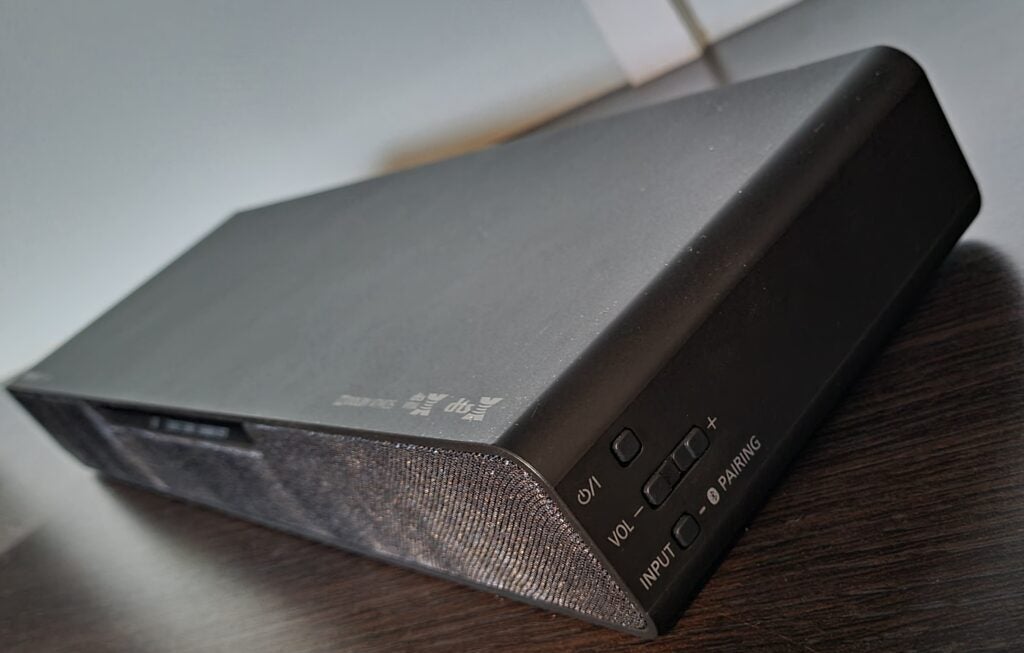 The SoundSlayer is a small soundbar, especially when compared to other products on the market right now. However, its compact profile is definitely a positive, since it’s able to seamless slide beneath your TV, monitor or snugly fit into a crevice on your desk without much trouble at all. Keep in mind that you will need to snake in an assortment of wires behind it depending on what your connections you’re using.

It measures at 17 x 5.25 x 2.06 inches at a weight of 1.8kg, although the design is held back by a bland, all-black colour scheme that doesn’t express the level of exuberance you’d expect from a modern gaming peripheral. A limited edition model has been produced in partnership with Square Enix, but sadly we haven’t had a chance to fiddle with it.

The front-facing grilles cover up a punchy subwoofer on the inside, and slotted in a notch on the fascia are a number of LED indicators which highlight Bluetooth connectivity, power and a couple of other important elements. On the right hand side you’ll find the power switch, volume control and a button for selecting your preferred input.

Inputs follow a similar trend of simplicity, with the SoundSlayer sporting a two HDMI ports (one of which supports ARC), optical digital audio and Bluetooth. The aforementioned LEDs feature a colour-coded system to determine which mode the soundbar is currently in from a distance. It’s an intuitive system, yet let down by a mediocre remote control with build quality that doesn’t reflect the rest of the package.

Overall, the Panasonic SoundSlayer’s design does enough to impress, maintaining a sense of minimalism and simplicity, although it’s a shame you’ll need to keep the remote handy if you intend to switch between different gaming modes and other such things on a regular basis, since it’s a small device that I could easily see myself misplacing.

As mentioned earlier, the Panasonic SoundSlayer connections consist of Bluetooth and three connections at the rear in HDMI and optical audio. It’s graceful in its simplicity for good reason, even if having to defer to a remote to truly get the most out of its features can prove a little tedious.

The aforementioned remote is used for accessing the majority of SoundSlayer’s features once connected to a display, which we’ll dig into properly in the performance section. Despite having to jump through a selection of hoops to make the most of SoundSlayer, I found the roundabout nature to be more than worth the effort.

SoundSlayer features three modes dedicated to different genres in the gaming landscape – RPG, FPS and Enhanced Voices. This comes on top of the usual Standard, Music and Cinema presets. These gaming-focused modes aim to best match the audio profiles expected from such experiences, making sure the right aspects of the soundscape are captured and brought to the forefront. 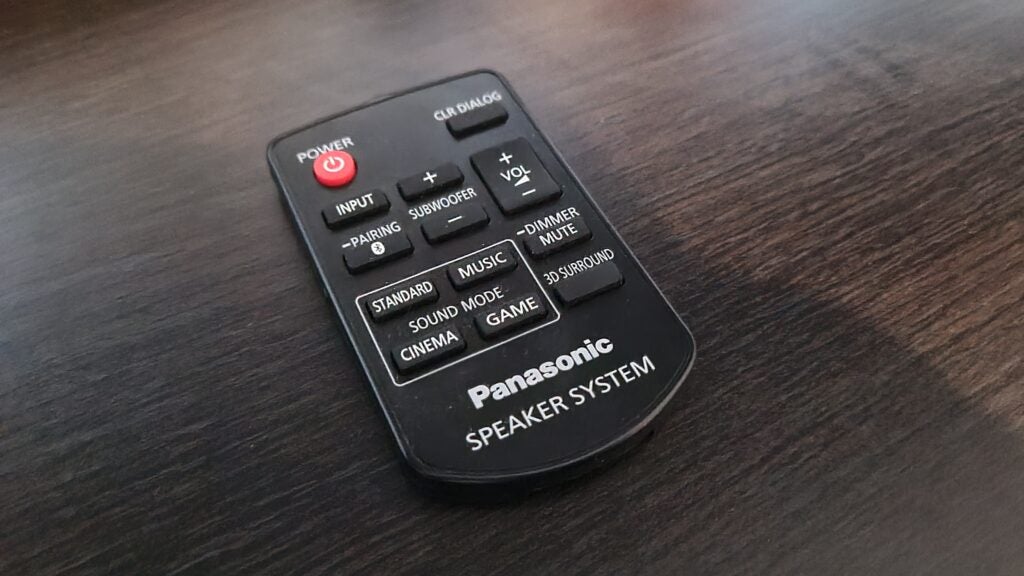 I did the majority of my testing for the Panasonic SoundSlayer with a PS4 Pro, but also dabbled with my PC and the Xbox One X to get a solid picture of how the soundbar performs with different platforms and genres.

Sat under my television, the setup up was seamless and within minutes I was receiving loud, substantial audio which was impressive, though unrefined without a bit of fine-tuning. Taking the size of the speaker into account, Soundslayer seems perfectly suited to smaller setups for those who aren’t trying to emulate a 5.1 or 7.1 surround sound system.

But given the form factor of Panasonic’s offering, it’s both a huge improvement over standard TV speakers and stands on its own when delivering a worthwhile audio experience. The sub-woofer is surprisingly aggressive, although thankfully won’t shake your desk into pieces. There’s no major vibration, but bass is more than enough when explosions ring off in the distance as the circle closes in during Apex Legends.

This is also a Dolby Atmos speaker, meaning a wide, more spacious sound is possible for a more immersive delivery of audio. All things considered, it’s still a decent and viable way of using the feature, and will be more than welcome with the arrival of PS5 and Xbox Series X right around the corner. 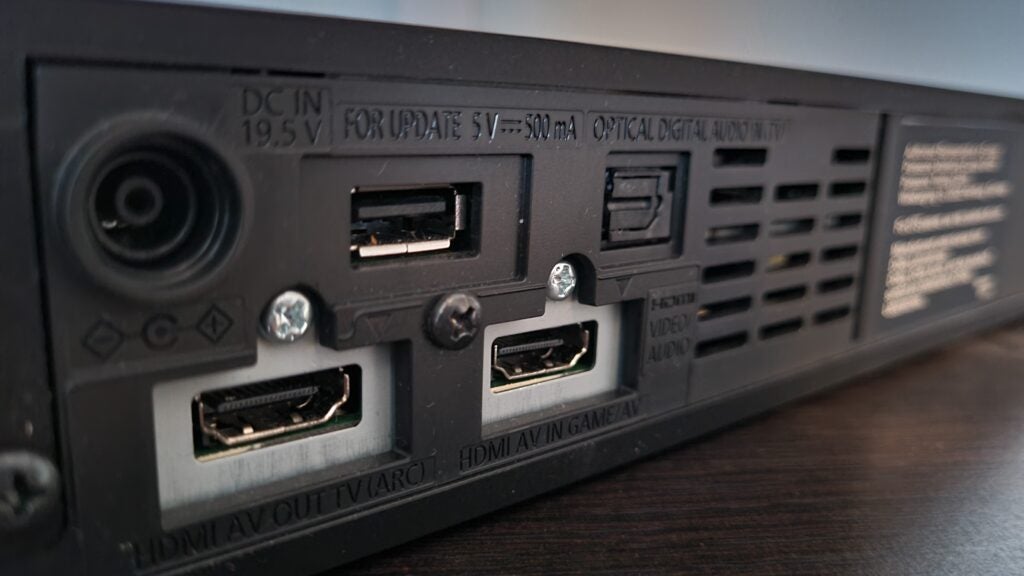 SoundSlayer is also incredibly loud, but despite this generous volume the more subtle sounds such as character dialogue and weapons reloading never fade into the background like you’d find on a number of other speakers. They remain present, increasing immersion when playing open-world experiences like Genshin Impact.

As for the gaming-specific modes, I don’t think they are genuine gamechangers for their desired genres (pun very much intended), but they provide a more nuanced delivery of sound when playing titles that fit the bill. Call of Duty: Black Ops Cold War‘s constant mixture of explosions and gunfire are perfect for the FPS mode, while Atelier Ryza‘s bubbly mixture of exploration and turn-based combat really shined with the RPG preset.

When you aren’t gaming and simply watching content on Netflix, YouTube etc, the SoundSlayer is equally as capable, although I would stick to the Standard preset or seek out a middle ground that best works with your setup. However, even without touching a thing the SoundSlayer still stood its ground, although audio through a Bluetooth connection such as Spotify on my phone did feel both muffled and tinny.

You should buy the Panasonic SoundSlayer if…

The Panasonic SoundSlayer is a great soundbar for gamers who aren’t after a more complete surround sound experience, and simply want to bulk up their existing setup with a few extra bells and whistles. From that perspective, it’s well worth considering.

The SoundSlayer doesn’t take up much space, which makes it a good fit for those who like to game on a desktop.

You shouldn’t buy the Panasonic SoundSlayer if…

However, for consumers looking for a soundbar more suited to general viewing or more capable surround sound for a larger living room, you would be better off looking elsewhere. Flaws aside, I’m very taken with Panasonic’s drive to deliver a soundbar that doesn’t hesitate to put gaming first.

Although it calls itself an Atmos bar, you’re not getting any overhead height channels from this soundbar, just a more spacious sound.