What is Panasonic Smart Viera?

Panasonic’s new smart TV platform for 2014, tucked under the umbrella name of Smart Viera, is a big step forward from last year’s offering thanks to features like TV Anywhere that lets you access your TV content from anywhere in the world, and an excellent ‘catch-up EPG’ that lets you access all the UK’s catch-up services straight from the EPG.

At first glance you might be forgiven for thinking not much has changed in the 12 months since Panasonic introduced its ground-breaking My Home Screen smart interface. Hit the remote’s Home button and you get the now-familiar set of customisable, themed home screens, together with the facility to tell the TV which member of your family is using it so it can bring up their own personalised home screens. 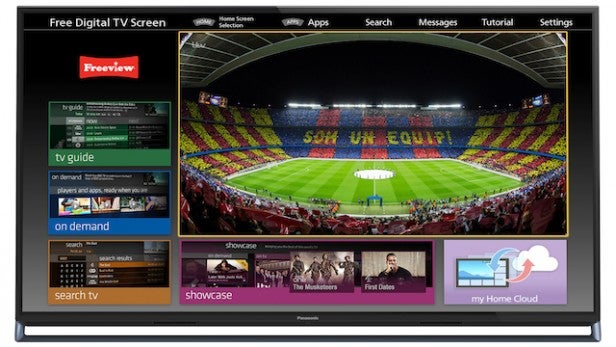 Some of Panasonic’s new TVs carry built-in cameras with face recognition so they can automatically tell who’s using the TV, plus there’s a new feature this year whereby you can teach the TV to recognise you by your voice!

Look more closely at the content of some of the link ‘tiles’ on the home screens, and that’s when you start to realise that actually, quite a lot of new stuff has been added to last year’s Panasonic Smart offering.

Given particular prominence – with good reason – is MyStream. This is essentially a scrolling, graphics-rich content aggregation interface that scours everything from the tuner to On-Demand sources, YouTube and even your own multimedia files in search of content the TV thinks you’ll like.

Initially, MyStream doesn’t have much to go on in deciding how best to populate itself. But provided you give the set permission to track your viewing habits, over time MyStream can become a really useful content shortcut/alternative EPG.

Of course, Panasonic isn’t the only brand to offer learning/recommendations technology on its TVs this year, but MyStream represents an unusually attractive way of presenting the results. 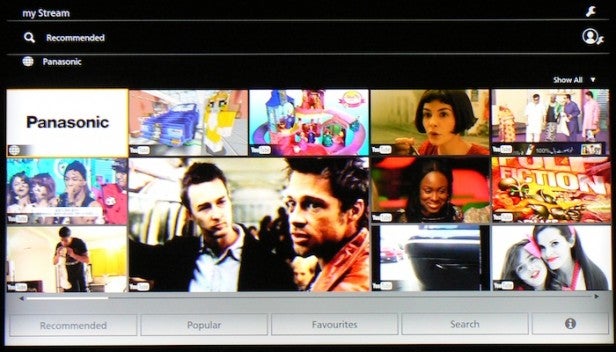 For all MyStream’s cleverness and elegance, though, it’s likely to be edged out as the most popular content-finding destination among Panasonic 2014 TV owners by the new built-in Freetime technology.

In case you’re not familiar with Freetime, it’s a brilliant system previously only found on external receiver boxes that allows you to scroll backwards on your electronic programme guide as well as forwards, providing an inspired way of integrating on-demand catch-up TV content seamlessly into a more familiar broadcast TV experience – aside from the inevitable fact that not absolutely all the broadcast channels or shows are available on catch-up. It’s very similar in concept to YouView.

Freetime feels so natural built into a TV that you can’t help but wonder why nobody built it into a TV before – except that the amount of time it’s taken Panasonic to get its 2014 range to market this year suggests Freetime’s integration has actually been a huge challenge in terms of both technical issues and content negotiations. 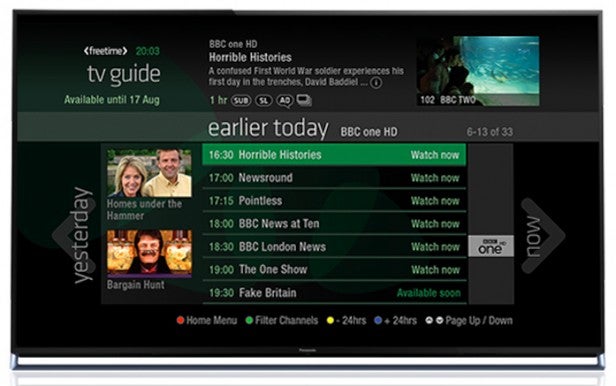 The Freetime UI in action

As well as being a brilliant addition to Panasonic’s Smart interface, Freetime also solves one of Panasonic’s oldest smart TV problems. It means the brand can now add to its previous BBC iPlayer support catch-up TV for Channel 5, the ITV channels plus Channel 4 and its affiliated channels. So Samsung is no longer the only brand offering all the main UK catch-up services.

It must be said that while Panasonic offers a Netflix app, it still doesn’t have one for Amazon Instant. In fact, its App content levels are still some way behind those of the smart TV world’s biggest content hitters. It’s also a damn shame that for some reason the first of Panasonic’s 4K TVs, the AX802 series, don’t support 4K Netflix streams. But Freetime could well be enough in itself to win many fans to Panasonic’s smart TV cause. 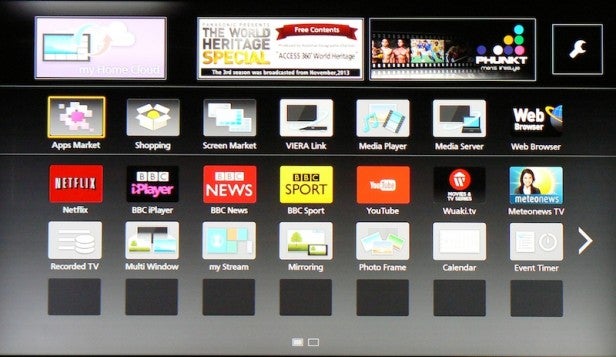 Especially if you also bear in mind Panasonic’s genius new TV Anywhere feature. This turns your TV into a virtual international video server, able to send video from either its tuners or recordings stored on USB HDDs to your smartphones or tablets anywhere in the world (so long as you have a decent broadband connection, obviously).

What’s especially brilliant about this service is that it lets you watch programmes from your home country while abroad that would not be available to you via normal streaming websites due to local rights issues.

TV Anywhere is able to get around these issues because you’re only an individual accessing your personal content stream direct from your personal TV.

The other major new feature of Panasonic’s 2014 Smart offering is the Info Bar. The idea behind this one is for the TV to present you as soon as you walk into the room with some key bits of ‘life’ information. It uses a motion sensor to detect your presence, and then automatically turns the TV out of standby to present you with a screen containing various tidbits of information.

This information includes local weather information, current time and highlights from your MyStream feed. If you’re using the feature on one of Panasonic’s TVs with a built-in camera, like the recently reviewed 50AX802, the TV can tell who you are and present you with your own personalised ‘Info’. 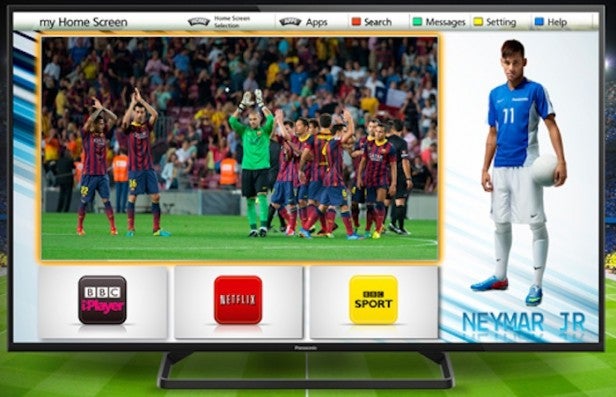 To be honest the Info Bar isn’t a feature we got much out of – other than feeling a bit irritated at the noise it emits when it automatically turns the TV on. There is a certain sci-fi charm to it though, as long as you don’t feel uncomfortable with the idea that your TV is always watching…

If this does make you feel uncomfortable, or you don’t like the idea of your TV consuming a fraction more standby power to drive the feature, don’t worry – you can turn the feature off.

The impressive raft of new features in Panasonic’s latest smart system are piled on top of the My Home Screen system that impressed us so much last year. There doesn’t seem any point going into this in depth again here given that we’ve already done a separate feature on it.

But we should point out that it remains, a year on from launch, the most comprehensive and successful attempt yet to personalise the smart TV process. The ability to build multiple bespoke ‘home screens’ containing links to just the content you personally find the most interesting works extremely well, and is an approach we expect other brands will eventually follow in one form or another.

Used as the main TV for the review period
Tested for more than a week
Tested using industry calibrated tools, discs and with real world use
Tested with broadcast content (HD/SD), video streams and demo discs
Next
Set up and Performance Review