Panasonic has a reputation for getting tough with its products. Its range of hardened portable computing devices has become legendary. Now it has applied this experience to its camcorders. The result is the SDR-SW20. It’s like the dinky SDR-S7, only waterproof, dustproof, and designed to endure a bit of rough treatment. It can be dropped from heights of up to 1.2m yet survive unscathed, and remain watertight down to depths of 1.5m. 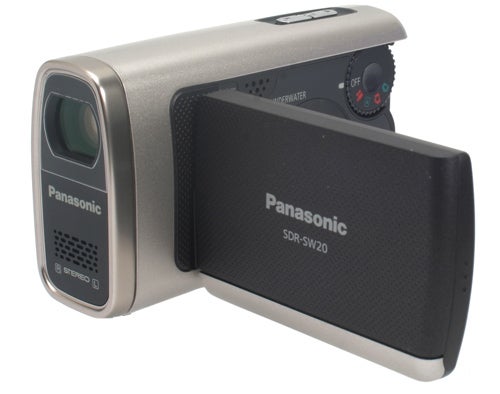 The SW20’s build quality is reassuringly robust. The brushed silvery and black plastic feels very solid, although the overall weight is about 60g heavier than the SDR-S7. It’s about 1cm wider and longer, too, but would still just about fit in a trouser pocket. To maintain its water and dust resistance, the SW20 has much sturdier panels on its ports than a regular camcorder, and each one has a rubber seal. 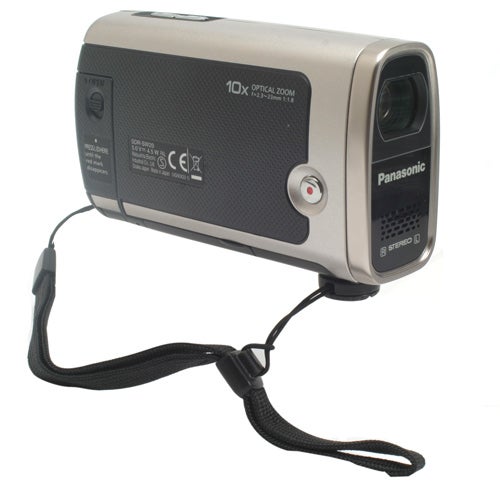 The catches are also quite hard to open accidentally. Unsurprisingly, the ports hidden therein don’t include microphone or headphone jacks – you wouldn’t be able to use them underwater anyway. For similar reasons, there is no accessory shoe either. But the lens itself has no cover, instead being protected by a small window of toughened glass. This will need regular cleaning if you really do shoot underwater regularly. 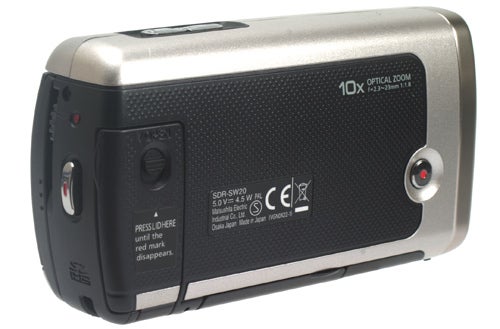 The SW20 records standard definition video, but at the slightly non-standard resolution of 704 x 576, rather than the usual 720 x 576. Three levels of compression are available. The top XP mode runs at 10Mbits/sec, whilst the just passable SP mode uses half that. The heavily compressed LP mode consumes 2.5Mbits/sec, but you would only want to use that if image quality is not a major concern and you need to record many hours of footage. Video is stored on an SDHC card, although none is supplied so you will need to factor this into the price. A 16GB card will hold over three hours of footage even in XP mode, so you probably won’t feel the need to shoot at any of the lower quality settings anyway.

The SW20, however, does differ from the SDR-S7 in order to suit its intended usage whilst swimming. For instance, there’s an Underwater mode that’s activated by pressing and holding the Underwater button. This alters the colour settings to compensate for the effect of shooting through water rather than air. It also filters the audio to counteract noise from the lens control motor during autofocusing, which will be picked up in water due to its greater carrying abilities for high-pitched sound. 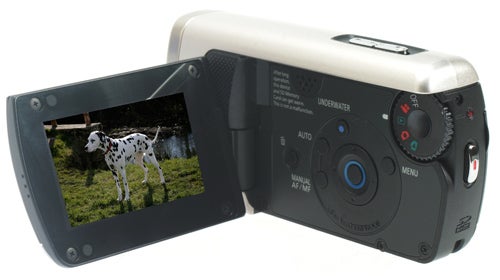 Being a Panasonic camcorder, the SW20 has a comprehensive set of manual features, readily accessible using the cursor wheel under the LCD panel. First, you need to press the Manual AF/MF button. One touch enables manual iris and shutter, and a second one toggles manual focusing as well. Getting a sharp focus manually is a little tricky using the cursor wheel, but the other manual options will be welcome. You can vary the iris all the way from F16 to F1.8, or F2.4 when zoomed in. Once the iris is fully open, up to 18dB of video gain can be added on the top – something no other manufacturers offer in their consumer camcorder ranges. The shutter can also be varied from 1/25th to 1/8000th sec, independently of the iris, which is also fairly rare in consumer camcorders. 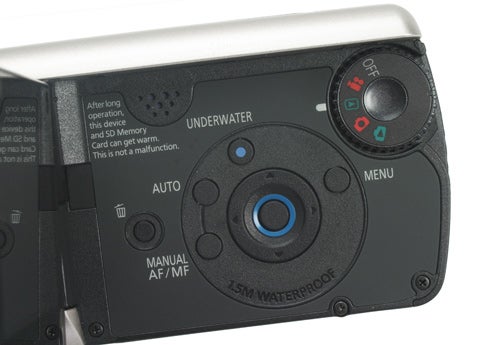 There are a few other sundry settings available. Even in auto mode, you can call up backlight compensation and a colour night view mode, which simply drops the shutter speed so you can pick up a picture as low as 2 lux. But motion becomes very blurry, and you can’t use it at the same time as Underwater mode. Finally, the soft skin setting detects skin tones and softens the focus in those areas accordingly, to even out any blemishes. Delving into the full menu reveals a quintet of scene modes, including Sports, Portrait, Low light, Spotlight, and Surf & snow.

Since the SW20 has the same sensor and optics as the SDR-S7, its video performance is very similar. In most daylight conditions, the colour reproduction is reasonable, although the image is a little fuzzier than the S7, possibly due to the extra piece of glass in the way of the lens. Unfortunately, the SW20 also has the SDR-S7’s major limitation – low light performance. With its 1/6in sensor, the image quality dies a death below the level of a room lit with 100W bulb. Even in the latter conditions, the picture is very grainy, although colour reproduction is still reasonable. This is the result of having to push the gain all the way to +18dB. 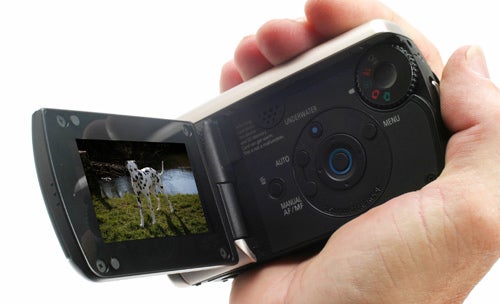 The poor performance in low illumination will be a hindrance to the SW20’s headline act of underwater shooting, preventing you from going very deep where things get dark, although 1.5m is the official limitation anyway. But in most conditions the results will be acceptable to the average consumer, and we found in shallow water the video quality was just as good as it was above. 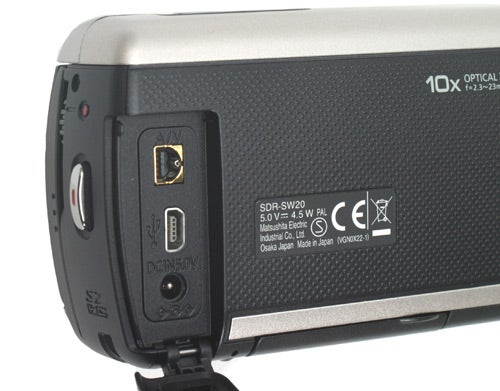 When it’s time to watch your clips, the SW20 provides a proprietary A/V connection beneath one of its watertight flaps. A cable sporting composite analogue video and stereo RCA audio is supplied, but there is no S-Video option. A mini USB 2.0 plug is also incorporated under the same flap, for downloading your footage to a PC. The SW20’s slightly non-standard recording resolution didn’t cause any incompatibilities with any of the editing applications we tried. 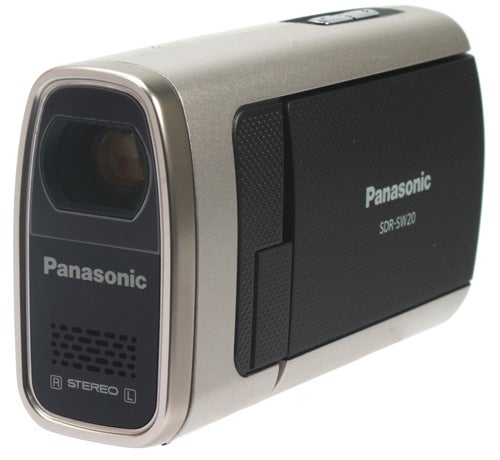 
The SDR-SW20 has few competitors. In fact, its main opposition will be a regular camcorder with a waterproof casing accessory, which is unlikely to be as small and convenient. Even FlipVideo’s Ultra is around the same size with its watertight attachment, albeit lighter. So this is a unique product. Its image quality is far from perfect, particularly in low light, but at under £250 the SDR-SW20 could even be considered as a second camcorder for more adventurous shoots. It’s great value, and we hope Panasonic also considers one of its more high-end models for the tough treatment – a waterproof HDC-SD9 would be pretty awesome.