Although Panasonic has been putting the majority of its attention into Secure Digital as the next-generation recording format after tape, it isn’t putting all its eggs into one basket. Indeed, some of its models sit on the fence, giving you a choice of more than one recording option. The SDR-H250 is billed as a ‘hybrid’ model, as it can record video to hard disk and SD memory. Whereas lots of camcorders offer SD for digital photography, the SDR-H250 supports video recording to SDHC as well, should the hard disk not be sufficient.


The SDR-H250 is another of Panasonic’s unfeasibly low-priced three-CCD models. It’s based around a trio of 1/6in sensors, each grossing 800-kilopixels. So on the one hand, having three CCDs should improve colour performance, but their small size will be detrimental to low-light sensitivity. The CCDs are grouped together for still images, allowing the SDR-H250 to boast 3.1-megapixel digital photography – which clearly includes some interpolation, as three lots of 800,000 pixels only make 2.4-megapixels. The maximum resolution for stills is 2,048 x 1,512. 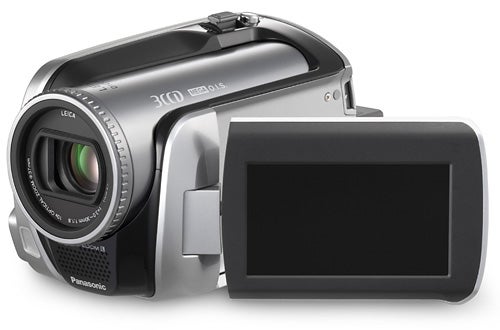 Video is recorded in MPEG-2 format, with three quality modes available. The top XP mode operates at 10Mbits/sec, SP at 5Mbits/sec, and LP at 2.5Mbits/sec. The built-in 30GB hard disk is enough for a healthy seven hours of video even in XP mode, rising to a whopping 27 hours in LP mode. Should you choose SD memory instead, a 4GB card is only sufficient for 50 minutes of XP video, or 3 hours 20 minutes of LP. Strangely, the SDR-H250 uses a different audio format depending on the media used. When recording to the hard disk, audio is in Dolby Digital format, but with SD memory MPEG-1 Audio Layer 2 is used instead.


Despite its recording flexibility, the SDR-H250 is very much for the point and shoot crowd. It has no accessory shoe, no microphone input and no headphone output. What looks like a lens ring in fact operates the built-in cover. Instead, the joystick takes care of this function, which is rather fiddly, particularly as it’s hard to see what’s in focus on the 2.7in LCD. But, other than the fact that the focus controls are cryptically marked + and -, the system is no worse than most other consumer camcorders.

In auto mode, the joystick also provides access to Soft Skin, night mode which enables the built-in video light, and Tele macro. The auto focus and exposure are both satisfyingly responsive, so those who just want to point and shoot should get good results without having to configure any settings. However, Panasonic’s usual powerful array of manual controls is still available via the joystick, when the camcorder is switched from auto mode. These include aperture from F1.8 to F16, and shutter from 1/50th to 1/8000th of a second. Both can be set independently, and once the aperture is fully open, up to 18dB of video gain can be added on the top, which can enhance performance when shooting in low light. Neither Sony nor Canon offer this level of control in their consumer models, although it could also be daunting for the novice.


The happy halfway house in between is the good ol’ Scene mode. Accessing these necessitates a trip to the full menu, however. Panasonic is relatively sparing with these, only offering five options, including Sports, Portrait, Low light, Spotlight and Surf & snow. These may be the most frequently used ones, but other manufacturers include quite a few more, particularly Canon. 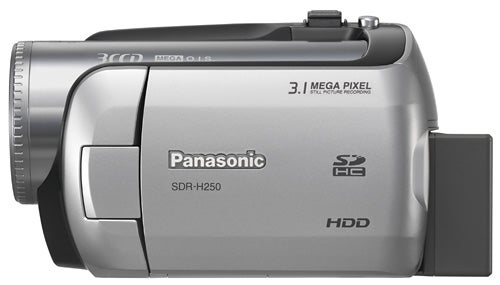 The SDR-H250 also offers only two white balance presets, for indoors and outdoors, alongside manual and automatic modes. Other features to assist the novice include the Anti-Ground-Shooting system, which senses if the camera is upside down whilst still in record mode, and switches to pause.


As to be expected in a three-chip camcorder, the SDR-H250 gets colours spot on in good lighting conditions. There isn’t much evidence of MPEG-2 compression artefacts, unless the camera moves very fast. In lower light, equivalent to a room lit by a 100W bulb, the SDR-H250 still fares reasonably well. The colours are nowhere near as saturated, but at least the amount of visible grain is low and relatively fine. However, the picture isn’t as sharp as the NV-GS230, which has essentially the same trio of CCDs.


Dropping the light levels lower, to the equivalent of candlelight, shows the limitations of the small sensor chips. Most of the colour information is lost, and the noise increases dramatically. Where Panasonic’s larger-chipped NV-GS500 is still just about usable in these kinds of conditions, the SDR-H250 isn’t – the video is too dark, grainy and washed out.

At first glance, the SDR-H250 looks like it doesn’t have any connections at all. In fact, Panasonic should offer prizes to anyone who can actually find them. Underneath an unnecessarily large flap at the back, which you can only access with the LCD panel open, is a single proprietary AV connection. This hosts a breakout cable offering composite and S-Video, plus RCA audio – but output only. Even less obvious is the USB connection, which is hidden beneath the battery. Presumably, Panasonic has put it there to prevent you from using a PC connection without the AC adapter attached. 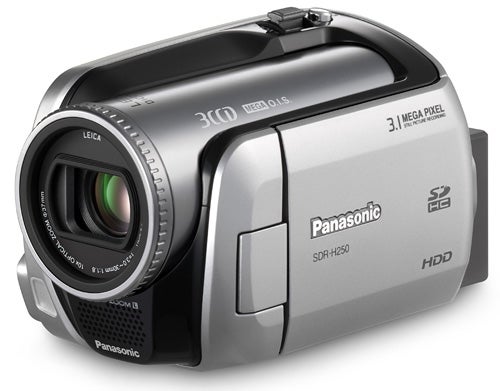 Most editing apps will support the MPEG-2 video the SDR-H250 shoots. You will need to import it rather than simply drag and drop, but a utility for this is provided with the majority of mainstream software. Adobe Premiere Elements, Ulead VideoStudio and Pinnacle Studio all have the facility.


The Panasonic SDR-H250 is not a camcorder which will appeal to the video enthusiast, despite its trio of CCDs and comprehensive manual controls. The lack of audio inputs and accessory shoe discount it for anything other than its target market. The ability to record to SD is also a bit of a white elephant – with a 30GB hard disk on board, you will rarely use the removable option. But at just over £400, this is still a keenly priced hard disk camcorder, and should satisfy the non-enthusiast looking to shoot video in this format.