What is the Panasonic SC-PMX7DB?

Panasonic describes the SC-PMX7 as a ‘wireless hi-fi system’ by virtue of its built-in Bluetooth connection, which allows you to stream music from your mobile gadgets and laptops, though it includes a CD drive, an iPod/iPhone dock, DAB/DAB /FM radio tuners and a USB port as well. Indeed, Panasonic calls it a ‘high-end’ system, but it’s more mainstream than that. Unlike the similarly-priced Denon CEOL Piccolo and more expensive Naim
UnitiQute 2, it has no Wi-Fi or networking support. It’s wireless purely by dint of its Bluetooth connection.

The SC-PMX7 sports an unadventurous but undeniably attractive design. The control unit’s conservative straight lines, black finish and prominent front panel controls are in the traditional micro system mould, a departure from the curvy minimalism of the Denon CEOL Piccolo.

But like the Denon, its compact, unobtrusive dimensions shouldn’t give you any headaches when housing it in the living room, while the elegant brush-effect fascia and robust aluminium construction live up to its premium billing. The large volume dial is surrounded by a silver ring, which contrasts beautifully with the black finish.

The busy front panel has a faux two-tiered effect going on. The top ‘half’ houses a large LED panel and bass/treble dials, which many brands would have eschewed for the sake of minimalism but we love this old-school approach to tone control.

Meanwhile, the bottom half crams in the CD tray, playback/input selection buttons and a USB port. Hidden under a flap on top of the unit is an iPod/iPhone dock with a Lightning connector, which allows you to connect newer Apple devices like the iPhone 5, iPod Nano 7G and iPod touch 5G. Older models and iPads can be connected and controlled via the USB port.

The SC-PMX7DB is bundled with a pair of speakers, which are surprisingly well made for the money. The enclosures are solid and sturdy, and feature binding posts as opposed to the cheaper springclips you’d find on all-in-one home cinema systems. Their black box design is unremarkable but goes nicely with the main unit.

Given how much Panasonic has already stuffed into this system, the sparse rear socketry comes as no great surprise. There’s a set of analogue stereo inputs should you wish to hook up a TV or set-top box, a connector for the DAB radio aerial and speaker binding posts, but that’s your lot. A digital audio input might have been useful, but this system’s self-contained approach means you shouldn’t need to connect external devices anyway. 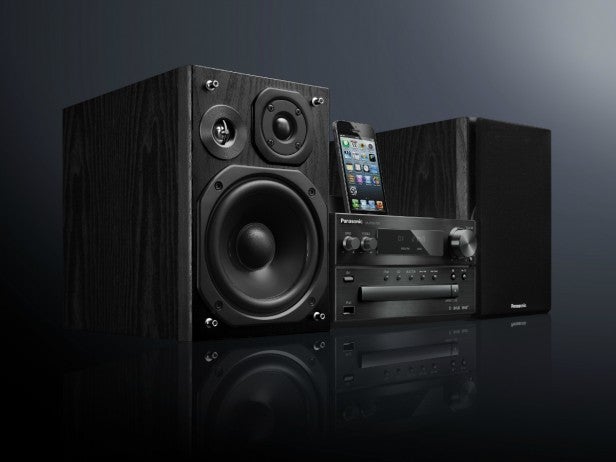 Disappointingly the system will only play MP3 via USB, ruling out hi-res formats like FLAC, ALAC and WAV – this really is a mainstream system.

There’s also a selection of presets to play around with – Heavy, Soft, Clear, Vocal and Flat – plus a Surround mode and a D.Bass setting to boost low frequencies.

Power output from Panasonic’s jitter-reducing LincsD-Amp (last heard on home cinema systems like the SC-BTT560) is rated at 120W. The driver array in the three-way speakers includes a 140mm Bamboo Charcoal PP woofer cone – which takes advantage of bamboo’s light yet rigid properties – a 19mm dome tweeter and a 15mm Piezo super tweeter.