This big-sounding bar is a smooth operator with plenty of slam, but the Dolby Atmos labelling is something of a misnomer. Consider it a 3.1 sound system with delusions of grandeur

Tuned by the golden-eared bods at Technics, it promises hi-fi performance – or, at least, higher-fi than run-of-the-mill soundbars. Plus, with Chromecast support and Bluetooth it isn’t above the day-to-day mundanities of streaming audio.

Excited? You may well be, but the SC-HTB9000 isn’t quite the product you may initially think it is…

It’s difficult to make a soundbar look anything other than functional, but Panasonic makes a decent effort. The bar has a neat rolled grille, and there’s a polished accent running full-width, which also features a number of touch controls: power, volume control and input selection.

A “Tuned by Technics” badge stresses musical credibility, backed up inside by the provision of a Technics derived JENO Engine, used to reduce jitter from connected HDMI sources.

The soundbar is supplied with a simple mounting bracket, for positioning it under a wall-mounted TV. Measuring 1050mm wide, the SC-HTB900 is suitable for screens that are 55in and larger.

Connections sit in a recess down under. There are two HDMI inputs, plus an HDMI ARC output. While 4K enabled, these convey only regular HDR10. They don’t support HDR10+ or Dolby Vision passthrough. 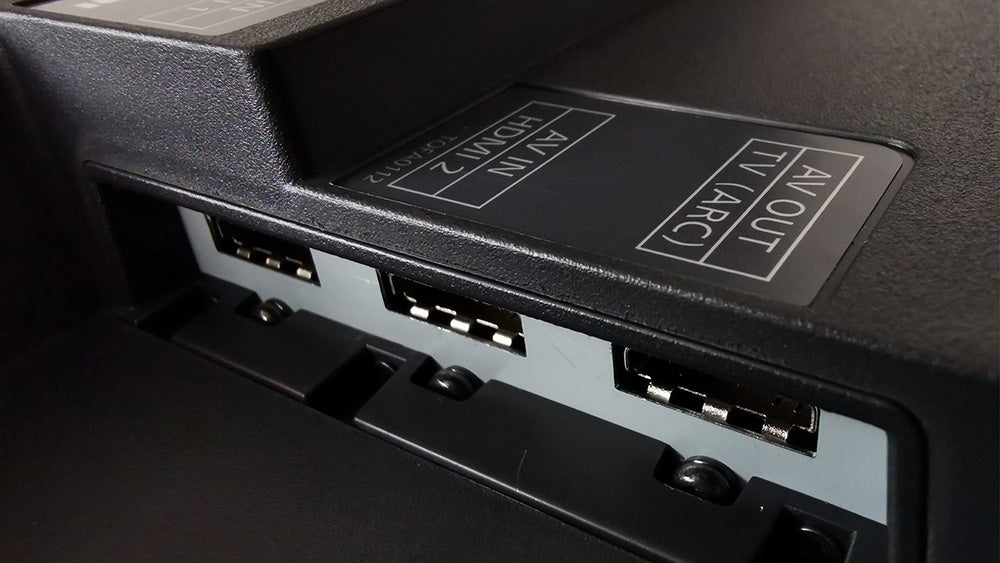 There’s also an optical digital audio input and IR blaster input. Ethernet is available as an alternative to integrated Wi-Fi (the soundbar isn’t dual band, it only works with 2.4GHz). Bluetooth v4.2 provides a wireless cherry on top.

The soundbar utilises an eight-speaker LCR array. There’s a pair of 6.5cm woofers and 1.6cm dome tweeter left and right, separated by matching twin woofers that handle centre duties. The tweeters are high-res capable. There are no dedicated Dolby up-firing drivers on board.

The partnering wireless subwoofer is a lightweight, relatively compact box, armed with a downward-firing 16cm driver that takes aim at a moulded plastic base. 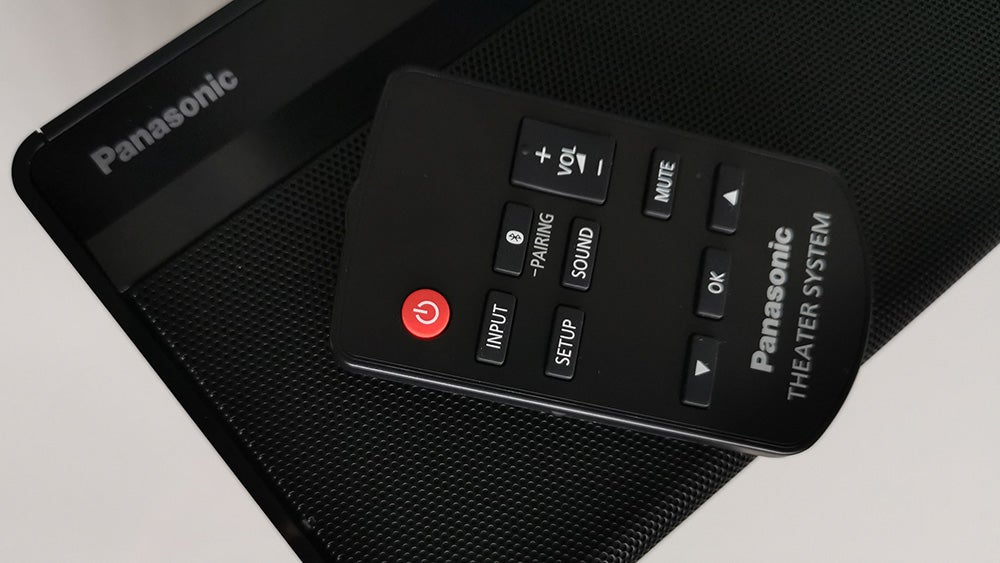 Usability is somewhat rudimentary. There’s no on-screen display; instead, the bar proffers a bright LED display, readable through the grille itself.

If you’re coming to the SC-HTB900 in search of 3D audio, or even a loose interpretation of it, you’ll be disappointed. This is unapologetically a 3.1 system. While the SC-HTB900 understands Dolby Atmos, and for that matter DTS:X, it really doesn’t do much with the codec.

Both rear surround and high-channel information is deployed through the front left/right arrangement. A 3D surround effect “pushes” sound upwards, but it’s far from convincing. It doesn’t exhibit any of the psycho-acoustic cleverness of the Sony HT-ZF9, which also delivers Atmos through a three-channel, forward-facing array.

A run-through of standard Dolby Atmos test clips, designed to engulf you with placed effects, is locked entirely to the front soundstage. 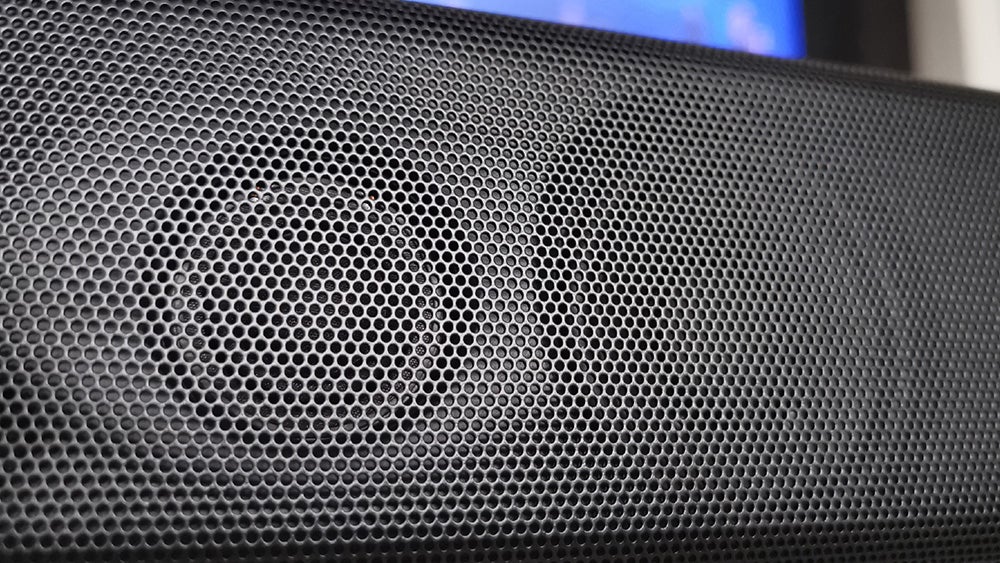 The system offers a good number of sound modes: Standard, Stadium, Music, Cinema, News and Straight. The latter maintains a two-channel delivery for stereo content, moving to 3.1 for multi-channel sources.

Immersive caveats aside, the 3.1 performance of this bar is consistently enjoyable. Vocals and dialogue are clear and well rounded, singer songwriters mellifluous.

The presentation is wide, too. Like all the best bars, the soundstage appears to expand beyond the physical dimensions of the cabinet.

The opening heist in Baby Driver (Sky Cinema UHD, Dolby Atmos) hits a high note, with thumping beats and dynamic action. It gets the adrenaline pumping, even if there’s little sense of sonic travel. 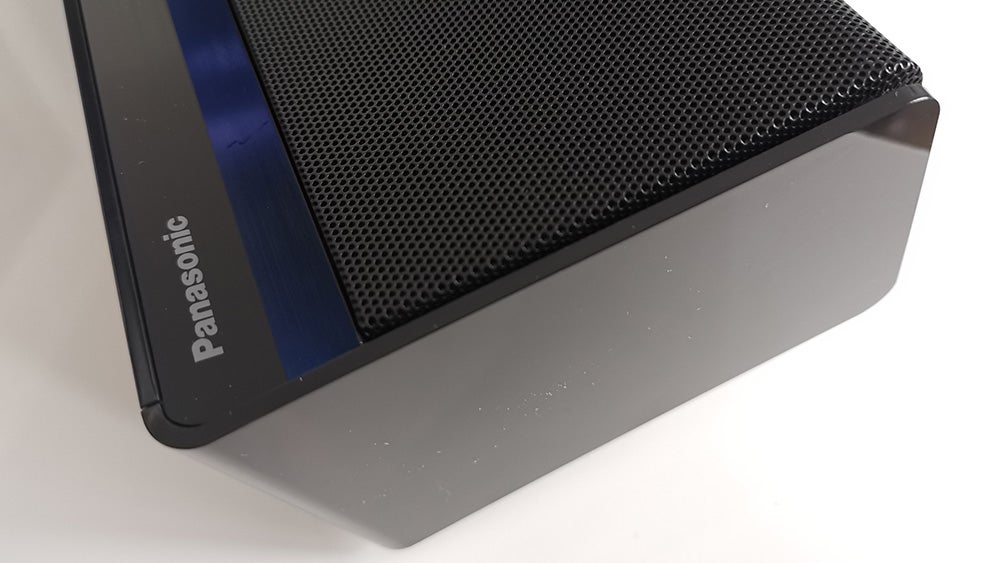 While the subwoofer may be lightweight, it sounds seismic. Previous Panasonic soundbars have received criticism for their lack of bass, and it seems those wizards from Technics have gone out of their way to redress the balance by really ramping up the boom. The system is bone-rattling at times, but in a good way.

The subwoofer comes into play at 31.5Hz, but doesn’t really disgorge any energy until 50Hz. The crossover with the main soundbar is set at 100Hz. If you keep the sub close by, the crossover is relatively seamless.

Total power output is rated at 505W. This breaks down to 3 x 85w across the front, and 250W going to the sub. While it’s probably best to take that number with a pinch of marketing salt, the system demonstrably has enough grunt to fill the average listening room. Note that it doesn’t appreciate being driven too hard, though, as the soundstage starts to get a little ragged.

If you value sonic clarity and gutty slam, the SC-HTB900 is a winner. However, don’t come to this 3.1 package expecting immersive 3D audio – it simply doesn’t deliver. The lack of support for dynamic HDR metadata standards also makes it a poor fit if you have an upmarket 4K screen.

Ultimately, the SC-HTB900 sits between stools. It’s expensive and unconvincing when compared to rival Dolby Atmos soundbars, but it does sound pretty darn great on its own terms. Make of that what you will.