What is the Panasonic SC-HTB680?

The SC-HTB680 is the middle man in Panasonic’s latest soundbar range, positioned one step up from the 2.1-channel SC-HTB480 but one below the range-topping 5.1-channel SC-HTB880.

Exclusively available from PC World and Currys, the SC-HTB680 boosts total power to 350W and ups the channel count to 3.1, with dedicated left, right and centre channels plus a wireless subwoofer. Its mission is to boost the sound quality of your TV without the complications and clutter that come with traditional 5.1 separates.

The SC-HTB680 is attractive without going over the top. It uses the same Delta Form design as the SC-HTB480, with a slanted top panel and low-profile shape that won’t obstruct the screen when placed in front of the TV. The black speaker mesh and brushed silver trim is a winning combination, but most pleasing of all is the soundbar’s solid build quality.

You can place the soundbar on a flat surface or tip it upright and mount it on the wall. In the latter instance, all the brackets you need are in the box. It’s designed to accompany 42in TVs.

At one end of the soundbar is a row of touch-sensitive controls (an upgrade from the HTB480’s hard buttons), while the front display panel gives handy information like selected inputs and setup menus.

However, when placed on a flat surface it faces upwards and can’t be seen from the sofa, forcing you to get off your backside to see what it says.

The accompanying subwoofer is a large black box with a tacky plastic base. It looks inoffensive enough but if you want to hide it away then the wireless connection makes it easy. 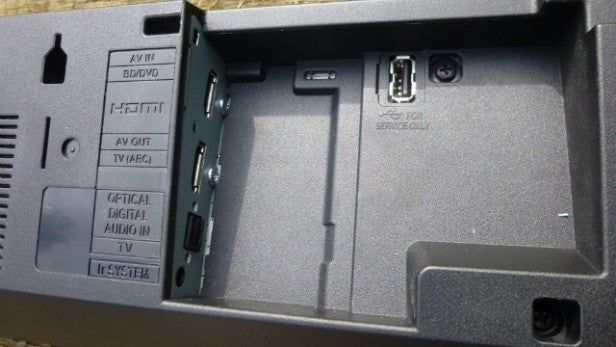 Panasonic hasn’t skimped on connections. In a recess underneath the soundbar you’ll find an HDMI input and output, optical digital input and a port for the supplied IR blaster. The orientation of the recess makes it fairly tricky to access the sockets, especially if your cables are on the thick side.

The HDMI output is ARC compatible, which means you can pass sound from a compatible TV to the soundbar over a single cable. If you’re connecting a Blu-ray deck to the HDMI ports, bear in mind that the soundbar can pass through 3D but not 4K signals – only the SC-HTB880 supports the latter.

Bluetooth is the highlight of the feature list, providing an easy way of streaming music, while NFC allows you to pair compatible devices simply by tapping them on the logo.

Panasonic says the on-board amplifier delivers 350W of power – 70W per channel for the left, right and centre and 140W for the subwoofer. There’s on-board decoding for Dolby Digital and DTS but not Dolby True HD or DTS HD Master Audio – although the soundbar will take a multichannel linear PCM signal that’s been decoded by a Blu-ray deck.

Dolby Virtual Speaker aims to generate a surround sound effect, which works in tandem with Panasonic’s own 3D surround technology to add extra width and height to the sound. Another of Panasonic’s modes, 3D Clear Mode Dialogue, makes speech sound like it’s emanating from the TV screen.

Finally, a free Panasonic Music Streaming App for Android and iOS devices lets you stream music from the device (or others on your network) to the soundbar via Bluetooth. 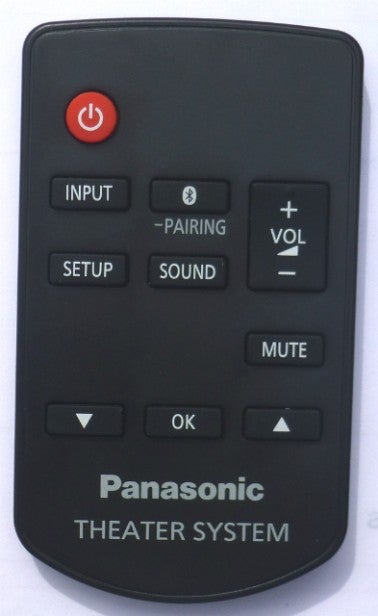 We hoped the step up in price from the SC-HTB480 would bring with it an upgraded remote, but sadly not – you get the same small cheap zapper, which sits a little awkwardly in the hand.

Button organisation is haphazard too, particularly the up and down menu control keys at the bottom. You’ll get used to it but we’d have preferred a larger and more intuitive remote.

The Setup and Sound buttons let you toggle through the menu categories on the LED panel. Setup lets you dim the LED display (although that’s not really a problem if you can’t see it) and change auto power, volume limit and Bluetooth options.

The Sound menu is where you can tinker with the sound modes, or activate Auto Gain Control (to prevent big spikes in loudness) and Low Volume Mode (which boosts dialogue for low-level listening).

We weren’t enamoured of the SC-HTB480’s performance, but the SC-HTB680 offers a slight improvement. Some of the same flaws are evident, but the added power and extra audio channel give the sound greater presence and focus.

Most importantly, its sound blows any flatscreen TV out of the water with its greater depth and dynamism. The subwoofer is the main difference, lending a solid foundation to rowdy action scenes while raising the sense of scale and drama.

That’s a massive advantage when playing Thor: The Dark World on Blu-ray, a movie with no shortage of action scenes to test the Panasonic’s mettle.

As Thor and Loki battle Algrim on Svartalfheim, punches and kicks boast terrific weight and there’s a solid thump when Algrim hurls a rock at Thor.

Later, as Malekith unleashes the Aether in Greenwich (of all places) the sub is a constant presence, rumbling and pulsing as buildings and spaceships explode.

Integration could be a little tighter and it lacks the subtlety of superior subs when conveying varying levels of intensity, but on the whole it does a stand-up job. Be judicious with the subwoofer settings and H.Bass though, as it’s easy to overegg the pudding.

Tonally the SC-HTB680 has a snappy midrange and crisp high frequencies, which allows for clear dialogue and detail, but that translates into harshness when you turn the volume beyond half way. As a result, some of Thor’s battles make for an uncomfortable listen.

To better illustrate what we’re talking about, try turning off the subwoofer (which we wouldn’t suggest under normal circumstances). What’s left is a thin, spitty sound with practically no bass depth of its own (the soundbar uses a single 65mm driver for each front channel), which suggests why the subwoofer isn’t as seamlessly integrated as we’d like.

That also leaves music sounding artificial, with vocals, instruments and high frequencies lacking the velvety hi-fi quality of the pricier Paradigm Soundscape or even the Wharfedale Vista 100. The sub lends depth to drums and basslines but lacks the agility to stay truly in the pocket. But to be fair it’s a million times better than listening to music through your TV.

Should I buy the Panasonic SC-HTB680?

The SC-HTB680 gets a lot of things right, offering the sort of sonic thrills and spills you simply don’t get from a flatscreen TV, but to be honest you can buy better soundbars for the money.

A likeable soundbar in many ways, particularly in terms of design and features, but the SC-HTB680 is scuppered by a few sonic shortcomings.

Next, read our Best Soundbars Roundup