One of the things we most often complain about with today’s super slim-line TVs is the quality of their audio, or rather the lack of it. With manufacturers pushing to outdo themselves with TVs that are thinner than an After Eight mint, the quality of the speakers in today’s sets has suffered simply because there’s so little room in the chassis to accommodate them. Of course, the obvious solution is to invest in a surround sound set up, but not everyone has the room or an accepting partner that’s willing to put up with the reams of cables and all the additional speakers that a full surround sound setup entails. This is partly why there’s an increasing number of soundbars appearing on the market. These units are designed to sit beneath your TV and pump out better sonics. The HTB520 is Panasonic’s premium soundbar offering, yet it’s still quite modestly priced, as you can pick it up for around £300 online. 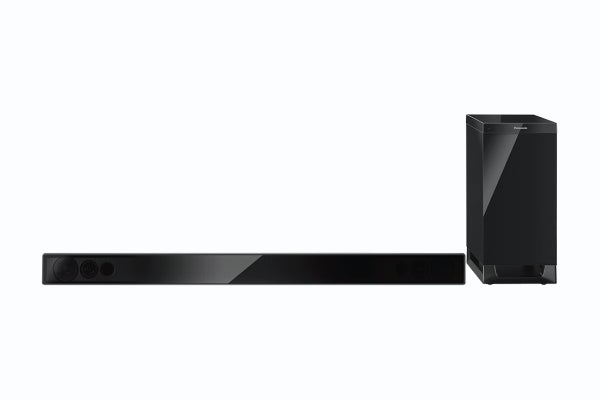 Like an increasing number of soundbars we see, the HTB520 is a two box solution: there’s the speaker bar that sits under your TV and a subwoofer that can be placed elsewhere in the room. As the soundbar communicates with the subwoofer over a wireless connection, the two don’t have to be sitting next to each other. This means you can hide the woofer away pretty much anywhere you like in your room. However, as the subwoofer is an active model, it does need to be plugged into the mains.

The main speaker bar is actually quite a stylish looking piece of kit. It’s got a much lower profile design than many other models that we’ve come across, and as a result looks a lot less intrusive when you’ve got it in place. It houses six speakers in total, with three mounted on each side. These are shielded behind a thin mesh that blends in seamlessly with the mirrored finish on the front of the soundbar.

There are two options when it comes to installing the HTC520. If your TV is perched on a pedestal stand on a table or AV unit, you can simply have the speaker bar sitting in front of it on its small rubber legs. Alternatively, if your set is wall mounted, you can use the mounting brackets that Panasonic provides to mount it on your wall under your telly. 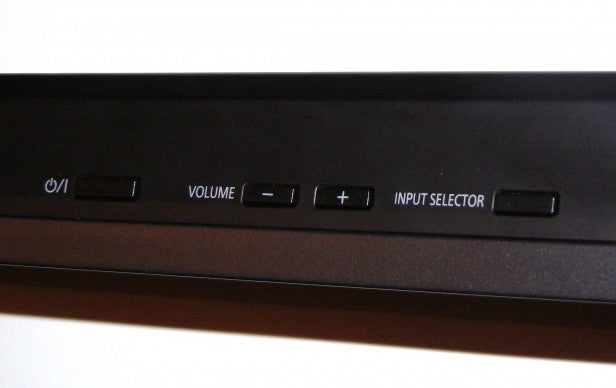 The subwoofer houses a downward firing driver and measuring 180 x 408 x 306 mm it’s relatively small for an active unit. The small size combined with its piano black finish means that it looks about as stylish as a subwoofer could be. The black finish also helps it to blend in pretty well with other AV kit. The wireless connection between the soundbar and subwoofer is configured automatically. So as long as the soundbar is already turned before you kick the subwoofer into gear the two will automatically pair with each other.

Sometimes soundbars block the IR receiver on the front of TVs, especially if the IR window on a set is positioned very low down. That shouldn’t really be a problem with this soundbar thanks to its low profile design. However, in case it does happen, Panasonic has cleverly included an IR relay system, where the front of the soundbar registers remote commands and the passes them on to an IR blaster on the back, so they still reach your TV.

The HTC520’s line-up of connections is perhaps a tad limited – there are just HDMI in and out ports along with a single digital optical audio input. This means you can’t use it as a speaker for equipment with analogue connections, such as portable MP3 players. 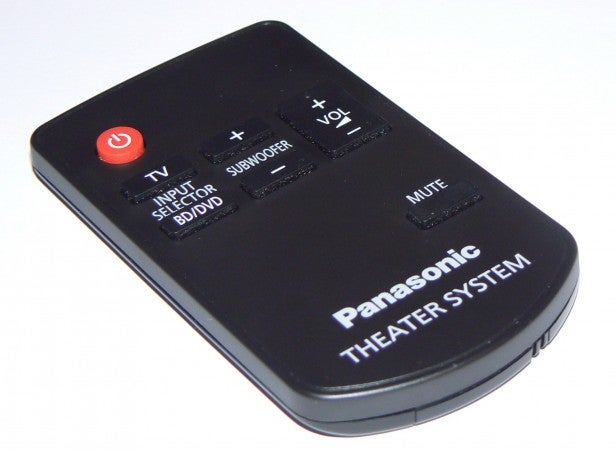 Most people will hook the soundbar up to their TV by plugging their Blu-ray player into the HDMI input and then connecting the HDMI output back to their TV. They’re then likely to connect the digital optical output of their TV to the optical input on the soundbar. That way you can switch between the two sources just by pressing the TV or BD/DVD input selectors on the remote.

However, if you’ve got a newer TV with a HDMI port that supports Audio Return Channel (ARC), you’ll only need to connect a single HDMI cable from this port on your TV to the input on the soundbar, as the ARC then handles all the audio routing from the TV in the digital domain. The HTB520’s HDMI port is 3D compatible too, so you shouldn’t have any problems if you’re using a new 3D Blu-ray player.

The remote control is perhaps the weakest element of this package. It’s a credit card sized zapper that’s a little bit too small for comfort and feels a bit too cheap to be included in a £300 package. Nevertheless, the buttons are quite responsive and it does have a mute button along with a dedicated subwoofer volume control. The latter will come in handy when you’re using the soundbar late at night and don’t want to annoy the neighbours with too much low-end rumble from the sub. 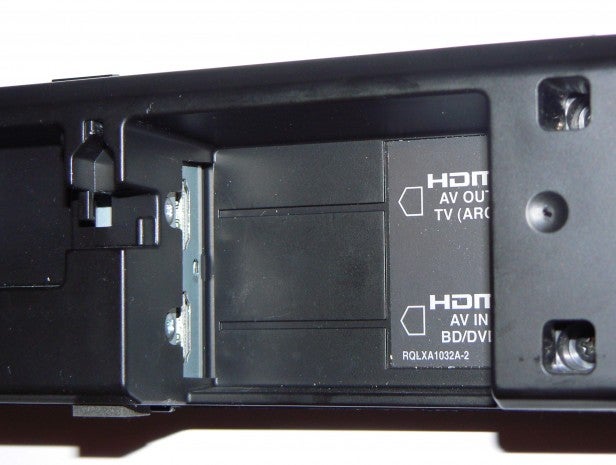 The internal decoder handles standard PCM audio as well as Dolby Digital and DTS sound. However, it doesn’t support newer high quality formats like Dolby TrueHD. The decoder also has a Dolby Digital Virtual mode, which, as the name implies, is a pseudo surround sound mode. This does expand the stereo image somewhat, but it doesn’t produce a convincing surround image in the way that the much more expensive Yamaha YSP-2200 does.

The six speakers in the bar, plus the subwoofer add up to a total RMS out of 240watts. Used in a through-lounge in a London Victorian terraced house this offered more than enough grunt to fill the room to ear aching sound levels, so it’s certainly not lacking in volume.

As you would expect, the HTB520 delivers a vast improvement in sound quality over the built-in speakers on today’s flatscreen TVs. Dialogue sounded particularly crisp and clean, without feeling detached from the main audio mix. The subwoofer also blends quite well with the speaker bar, never really over powering it unless you push the sub to artificially high levels via the dedicated sub volume button on the remote.

Action movie soundtracks are particularly pleasing, thanks to the extra bass punch provided by the subwoofer during explosions or shoot outs. It also performs surprisingly well with music, thanks to its crisp reproduction of higher frequency sounds like cymbals and hi-hats, as well as its robust mid-range.

Verdict
The SC-HTB520 is not without its flaws, as it certainly hasn’t got the broadest array of connections and the small remote is a bit fiddly to use. However, it’s very easy to set up – especially if your TV has an HDMI ARC port – and it manages to deliver excellent sound quality, that’s both warm and beefy. Add in a stylish design, and you’ve got one of the better, mid-priced soundbars available right now.