What is the Panasonic SC-HTB258?

The Panasonic SC-HTB258 is a space-saving soundbar that benefits from the back-up of a slim and flexible wireless subwoofer. Its small size means it should happily sit under most TVs without blocking the screen, while the sub can be placed vertically or horizontally to suit your room.

With the option of HDMI as well as optical input, the SC-HTB258 offers a little more flexibility with connectivity than we’d usually expect at its £200 price. It means the bar is able to decode more advanced, lossless sound formats such as Dolby TrueHD and DTS-HD Master Audio.

There’s also Bluetooth to enable music streaming from your phone or tablet. Sadly, there’s no support for the higher quality aptX codec – this is geared more towards enhancing your TV sound. 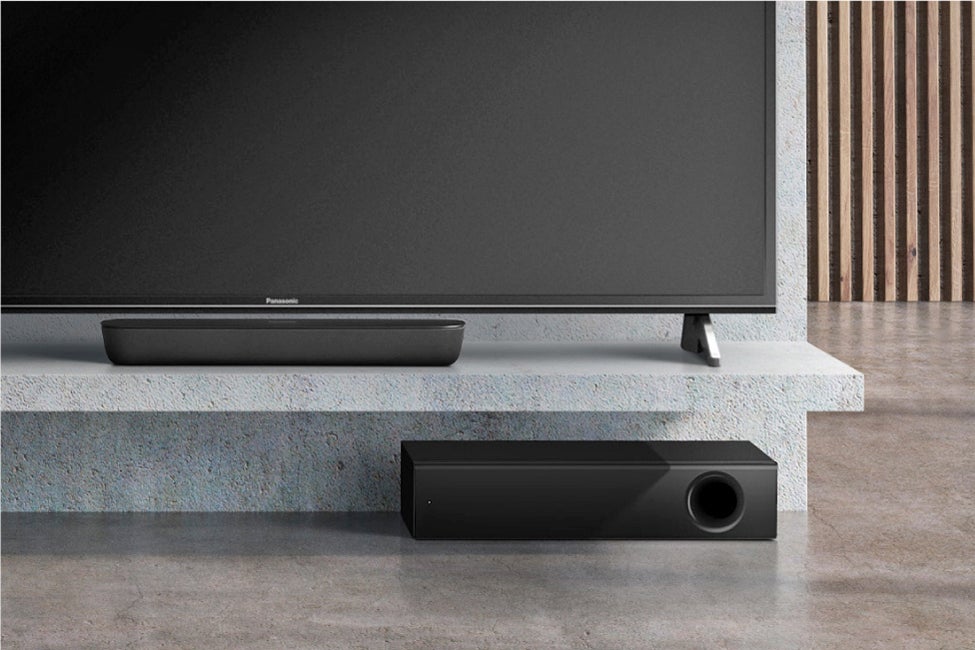 The SC-HTB258 isn’t really what I’d describe as a bar. It’s softer than that, with curved edges that give it an almost capsule-like design with a flattened top.

Measuring just 45cm long and 13.5cm deep it’s smaller than most soundbars too, sitting almost unnoticeable beneath the 55in Samsung TV I test it with.

The subwoofer is also slender. At 45cm tall its height is almost equivalent to my TV rack, but since it’s just shy of 10cm wide, it’s easy to accommodate either horizontally or vertically. I choose to place is vertically, to the right of my TV, giving it a little space from the back wall. 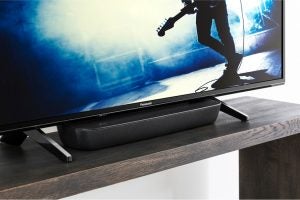 The sub requires its own power source, but otherwise entirely it is wireless and connects automatically to the soundbar when both are switched on.

Along the top of the soundbar are a series of LEDs that light up to indicate the settings or inputs selected, providing visual feedback if something has been changed. They’ll even scroll through in ascending or descending order as you alter the volume, or flash in unison when mute is selected.

The SC-HTB258 comes with a credit card-style remote to adjust the soundbar’s functions, although there are matching controls on the side of the soundbar itself should you misplace it. It isn’t going to win any awards for its design – it’s pretty small and plasticky. However, it does the job, with controls for power, volume, input and sound profile (which can be set to Music, Cinema or Off). 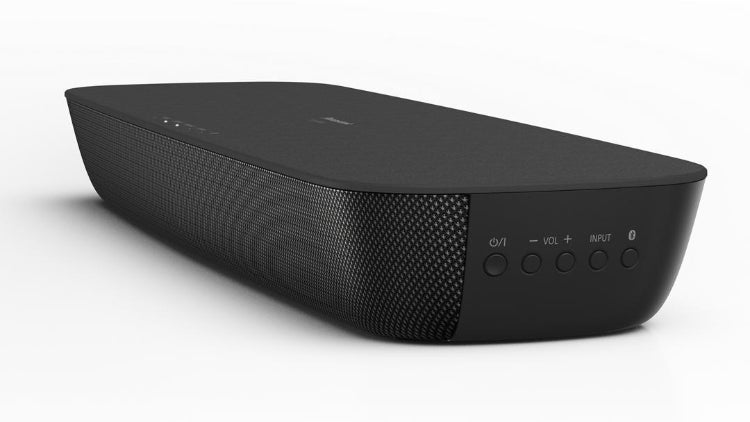 The SC-HTB258 is a fairly simple soundbar, with few features of note. In many ways, that is to its credit. At this level performance is key; there’s little to be gained from having numerous options that many people won’t even use.

Still, we’re pleasantly surprised to see a choice of inputs here – unusual at this price – with the option of optical or HDMI to connect the bar to your TV.

Optical is the way to go if you don’t have a spare HDMI input on your TV with ARC support. If you do, however, then an HDMI connection is capable of transferring better-quality sound formats such as Dolby TrueHD or DTS-HD Master Audio. 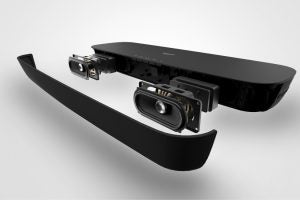 Despite the fact this is a 2.1ch soundbar – meaning multi-channel sound will be downmixed to a stereo signal anyway – using HDMI will ensure this is achieved at a higher quality than standard Dolby Digital Plus via optical.

It will also ensure the bar can be controlled at the same time as the TV, so it will power on or off at the same time, and can have its volume changed using the TV’s remote.

If you use optical, you’ll need to use the included remote to switch it on and adjust volume independently. However, you can choose to disable the auto power down (which switches off the bar after 20 minutes of no audio signal) and keep it on all the time.

Aside from this, the SC-HTB258 offers a couple of sound modes for Music and Cinema modes, and has the ability to adjust the level of the subwoofer too. Following a play around with this, I chose to keep it in the middle (the LEDs will help give you a guide as to whereabouts on the scale you are). 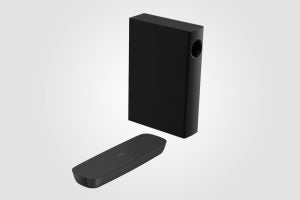 The SC-HTB258 does a good job at not letting its dimensions stand in the way of its capabilities. At normal listening levels, the sound pushes past its physical size to come across open and unconstrained.

Dialogue is direct and expressive; it doesn’t appear compressed in the way it sometimes can on smaller kit. It’s natural, too; there’s no sense of any heavy-handed processing at play, either.

Overall, the sound signature is pretty well balanced. The mid-range is undoubtedly the strong point – it’s clear, direct and detailed – but it isn’t the only part the SC-HTB258 gets right. The sub is also very well integrated, and does a good job at picking up the rumblier end of the spectrum, without the crossover being at all obvious. 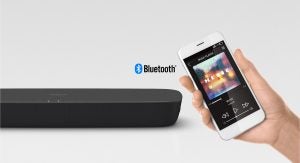 Considering its slender size, the sub goes admirably low and is agile to boot. It’s unlikely to rattle your floorboards with its power, but it will give a decent kick and sense of authority to the low-end.

If anything, Panasonic has been a little tentative with its handling of treble. There’s some rolling off at play towards to very top of the register in order to stop it from sounding harsh. It works for the most part.

However, there are times when it can sound a little sharp – such as with applause on standard-definition channels. Playing it safe in the top end means that it can fall just a little short in terms of excitement, when a big action scene could use a touch more snap. Turn up the volume and you’ll gain more bite, but it’s at high volumes that the limitations of the SC-HTB258’s size begin to show, with it sounding ever so slightly congested and smaller scale. 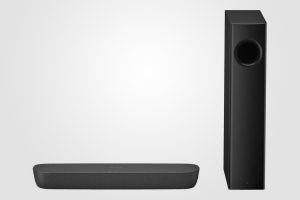 There remains plenty of oomph in this soundbar before it gets to that point, however, and actually the SC-HTB258 particularly impresses is in its ability to improve your TV’s sound, rather than simply amplifying it. Adding this soundbar will reveal more detail and dynamics from a movie soundtrack than you’ll have noticed before – not something you can always say about soundbars at this price.

It isn’t as insightful as a pricier soundbar , but I’m still suitably impressed by its capabilities. It displays plenty of clarity, a good amount of drive and agility when required. These qualities transfer to music too, so it doubles as a pretty handy party speaker should you need one.

I switched from a Sonos Playbar to the SC-HTB258, and considering the Panasonic is less than a third of the price, it can hold its head high. Clearly, there are limitations, but ultimately it delivers a very enjoyably performance indeed. 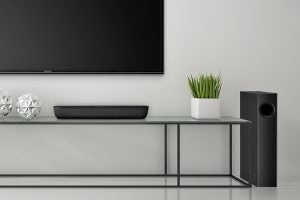 Why buy the Panasonic SC-HTB258?

With a £200 budget, I’m not sure I’ve heard much better than the Panasonic SC-HTB258. There are limitations, which you’d expect at this price, but it can easily hold its own next to the Canton DM5 – for £100 less.

You’ll have to find space for the separate subwoofer, but its flexibility when it comes to placement means most rooms should be able to accommodate it without fuss.

A larger budget will buy you a more spacious sound at volume, confident treble, and more power in the low end – and will no doubt take detail and dynamics to the next level. For those tight on budget and space, however, this is an excellent option.

An excellent space-saving soundbar that offers plenty without the huge price tag.