If you have recently bought a slim-line LED or plasma TV and are less than impressed with its built-in audio but don’t want to go for a full surround sound package, then a 2.1 speaker system or a soundbar is probably your best bet. The Panasonic SC-HTB20 is an entry level option from Panasonic that’s priced at around £250. Interestingly, it has a flexible design that allows it to be used either as a soundbar or a more traditional 2.1 set up.

The soundbar arrives as two separate pieces that you connect together using a central bracket. Setting up the speaker in this configuration is actually very easy, as you simply slot the bracket into the grooves on each side of the bar and then tighten four screws.

Panasonic SC-HTB20 soundbar not for you? Check out our round up of the best soundbars to buy 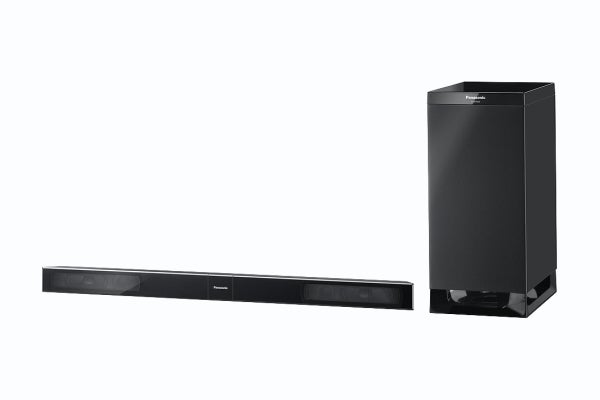 If you prefer you can keep the two sections separate and use the SC-HTB20 as a 2.1 system, because Panasonic also provides pedestal stands that the two speakers can be bolted into. This seems like a smart idea to us, as it broadens the appeal of the package.

The two stereo speakers are joined by an active subwoofer and, unlike the Panasonic HTB550 that we reviewed recently, the HTB20 doesn’t have an external processing box. Instead the amp and processor are actually built in to the subwoofer unit.

The whole system has a pretty smart design. The case of the soundbar and subwoofer are finished in glossy piano black and on the bar there’s a semi transparent grill through which you can just catch a glimpse of the main driver and tweeter pairings. The bar itself is relatively compact. It’s 754mm long, stands just 48mm tall and measures 53mm deep. The sub’s quite small too, and so doesn’t take up that much room, especially by the standards of most active woofers.

The main soundbar connects back to the subwoofer via two standard speaker cables. Annoyingly these cables are white rather than black, so they tend to stick out like a sore thumb against the black styling of the rest of the system. 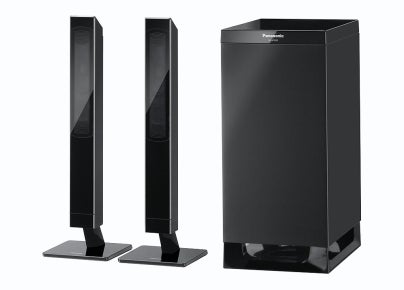 Around the back of the subwoofer sit the various inputs and outputs. There are two HDMI ports and two optical digital audio inputs. One of the HDMI ports supports Audio Return Channel (ARC), so if you have a newer TV with an ARC compatible HDMI port the TV can send all the audio from the other HDMI devices connected to it to the soundbar over a single cable cable.

Otherwise you have to connect external devices, such as Blu-ray players, to one of the HDMI ports and then use the second HDMI port to route the video back to your TV. You can then hook up another two devices via the optical digital audio inputs, allowing you to have a total of three devices connected at any one time.

There are some basic controls mounted on the top edge of the Panasonic SC-HTB20’s subwoofer to turn the system on and off, adjust the main volume level and change inputs. It also comes with a small, credit card sized remote that has three dedicated buttons for switching inputs, along with volume controls for not just the main volume, but also for controlling the subwoofer and dialogue level. The remote is a little bit on the small side — we could see it frequently getting lost down the side of a sofa — but the button are at least responsive and the remote isn’t overly directional, so you don’t always have to point it directly at the unit to get your commands to register.

By default the Panasonic SC-HTB20 applies its 3D surround effect to all multi-channel sources – ie. Dolby Digital and DTS soundtracks. This 3D mode is a combination of Dolby’s virtual speaker technology and Panasonic’s own 3D surround effect along with its Clear-Mode Dialog system. You can also change the settings so that the 3D effects are applied to stereo sources too, or just turn them off all together. Once the 3D mode is on, the only control you’re given over it is the level of the Clear-Mode Dialog level. Essentially, this allow you to boost or drop the audio level of the pseudo centre channel to make dialogue or commentary stand out in the mix. 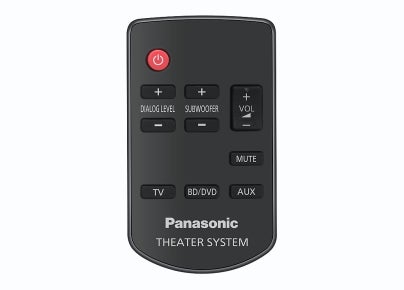 The soundbar doesn’t have any kind of display. Instead there’s a row of small LEDs across the top of the subwoofer that are used to indicate which input is active and the volume level. There are six of these LEDs in total. The first three are for the TV, BD/DVD and Aux inputs, while the last three are for Dolby Digital, DTS and PCM modes.

The lack of a proper display becomes a little bit annoying when you need to adjust stuff like the main volume control, subwoofer level or the centre channel dialogue level. This is because the lights at the front have to flash to try to give you an indication of what volume level you’re currently at, which is less than ideal.

Worse still, the lack of a screen means that controlling some of the more advanced features is like trying to unlock a safe in the dark. For example, to apply the pseudo surround sound modes to two channel sources (they’re automatically applied to all multichannel sources) you have to press and hold the Mute button for two seconds and then cycle through three options.

These options are shown via blinking lights on the Dolby Digital, DTS and PCM indicators, even though the modes don’t refer to these actual sound formats. For example, when Dolby Digital is lit up, it means the system is applying 3D effects to all sources, when the DTS indicator is lit up it’s applying it only to multichannel sources, while when the PCM effect is lit up it’s not applying 3D effects to any source. This seems to us like a clear case of Panasonic’s enthusiasm for cost reduction getting in the way of the system’s usability. 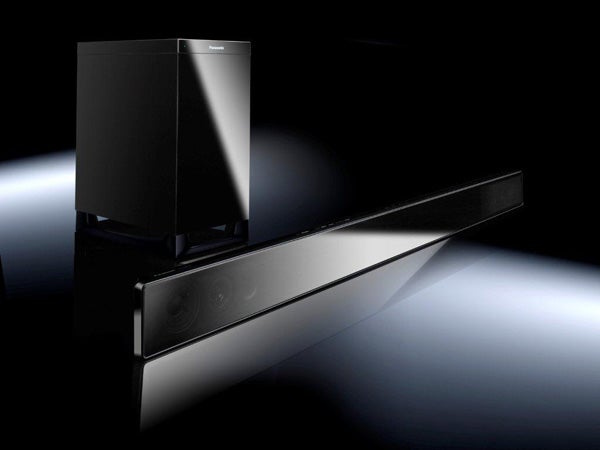 That said, the HTB20’s sound is a big improvement over what you get from the vast majority of today’s slim line TVs. The bass end reach is, as you would expect, much deeper, with the result that low–end rumbles and booms in action movies have a lot more impact.

It also delivers good, clean dialogue, and the Clear-Dialog Mode gives you pretty precise control over just how loud the centre channel sits in the mix. It’s especially handy for pumping up the dialogue a bit when you’re watching TV with the sound turned down low at night so as not to disturb other members of the household. However, although this system produces mid-range with plenty of presence, it’s not quite as rounded or as accomplished in this regard as Panasonic’s HTB-550, which has an extra mid range speaker driver. Highs are pleasingly energetic, though.

Verdict
The Panasonic SC-HTB20 is a neat package and the flexibility of its design – it can be used either as a soundbar or traditional 2.1 system – helps broaden its appeal. It’s also a good sonic performer for the price, but we can’t help feeling it would have been easier to use if Panasonic had kited it out with a proper screen.