The SC-BTT775 is Panasonic’s flagship 5.1 Blu-ray home cinema system, boasting all the killer features found on the SC-BTT370 (such as 3D playback and built-in Wi-Fi) but replacing its compact speakers with a set of towers. These tall black speakers are likely to dominate the landscape of your living room but that’s fine if you like your home cinema gear to be seen and heard – plus the larger enclosures could also bring a jump-up in sound quality from the BTT370’s compact speakers.

The main unit’s design is similar to that of the SC-BTT370. It’s a robustly-built, funky-looking black unit, measuring just 40mm high, which is almost as slim as Panasonic’s latest standalone players – testament to the space-saving qualities of Panasonic’s Clear Sound digital amplifier. The entire top panel is coated in a strange dappled texture that looks a bit like Braille, which seems to serve no purpose other than to make you touch it and attract even more fingerprints than usual. 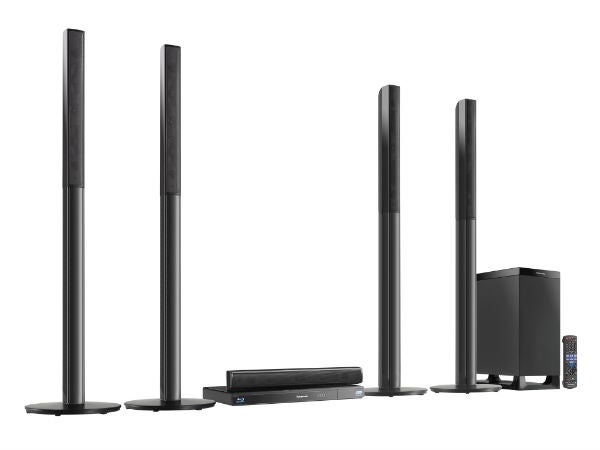 Buttons on the front panel are scarce – play, stop, open/close, volume and power – and some of these are hidden under a flap, behind which also lurks an SD card slot and USB port (more on those later). That makes the overall look minimal and unassuming, which we really like. The right hand corner of the fascia is given over to an iPod/iPhone dock, hidden away in a discreet pull out drawer. It’s a terrific feature, doing away with the hassle of plugging in a peripheral dock a la Samsung, and you can control your music and videos using the system’s onscreen menus.

If you’ve got a couple of HDMI-equipped components that you’d like to run through the BTT775, such as a Sky HD box and PS3 for example, then the two HDMI inputs will be welcome. The beauty is that not only can you enjoy sound through the Panasonic’s speakers when the system is turned on, but the system still passes through signals from connected components when in standby. You’ll also find ARC-compatible HDMI v1.4 output, composite video output, analogue stereo and optical digital audio inputs, a second USB port, an Ethernet port and an FM antenna input. If you don’t want cables running across the living room floor then you can invest in Panasonic’s £100 SH-FX71 transmitter card and receiver, which sends surround channel signals to the rear speakers digitally – there’s a slot for the card on the back.

The system’s two-way tower speakers are remarkably slender and stand just over a metre tall, with a gloss-black finish giving them a hint of contemporary glamour. They’re split into two sections, the top part of which houses the meat of the speaker (two mid/bass bamboo cone drivers and a tweeter). It slots onto a hollow lower section that serves as a conduit for a speaker cable discreetly running up inside, while the whole thing screws onto a circular base. The speaker section is substantially built, but the light, plasticky middle bit and the need to screw it all together makes them a little wobbly – high-end speaker construction this is not.

Also in the box is a compact downward-firing subwoofer (systems lower down the range use side-firing subs) with a fetching black finish and a long, slender centre speaker that should be easy to fit on a TV stand shelf. All of the speakers connect to the main unit using the supplied cables, with colour-coded plugs at one end and exposed wires at the other that plug into springclip terminals.

The BTT775’s manual reads like an A-Z of everything that’s cool in the world of home entertainment. Wireless media streaming, internet access, Wi-Fi, 3D, iPod support, multimedia support via USB and SD cards – you name it, this system does it.

The system’s built-in Wi-Fi (with support for 802.11b/g/n) is as convenient and cost-effective as ever – Panasonic charges around £80 for the wireless USB dongle needed on its cheaper systems so getting it as part of the package is always preferable. It makes network setup blissfully simple – helped along by the brilliant, graphics-heavy onscreen menus – and allows you to stream music, video and photo files from Windows 7 PCs on your home network. But the really clever bit is that the system can talk to DLNA compatible Panasonic recorders (like the DMR-BWT800) and stream TV recordings.

The system can stream a healthy range of media formats, including DivX HD, MKV, MP3 and JPEG, and play them from USB devices. Slot an SD, SDXC or SDHC card into the front and you can additionally play MPEG-2 SD Video, AVCHD, JPEG and MPO, but that slot is also required if you want to sample the delights of BD Live (also available over the Wi-Fi connection, obviously).

We’ve done a lot of grumbling already this year about the inclusion of Viera Cast over the new Viera Connect on Panasonic’s Blu-ray gear, and sadly that’s the case again here. The interface itself isn’t the problem – it’s pleasant to use, looks great and streams videos with minimal stuttering – but the content is slightly past its sell-by date. With YouTube, Twitter, Picasa, Acetrax and Bloomberg on board, it’s never going to beat Sony’s comprehensive line-up, which includes several catch-up TV services. Just adding BBC iPlayer would have been enough. 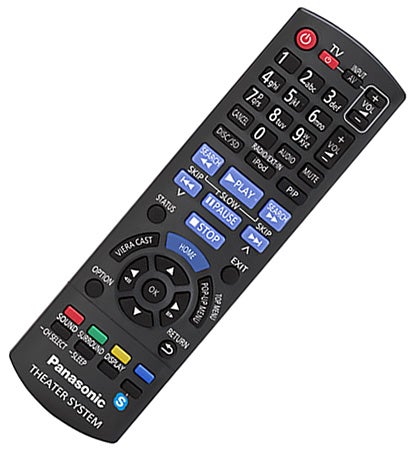 But there is salvation in the form of Skype, which allows you to make video calls without the aid of a PC. All you need is Panasonic’s communication camera, which plugs into that USB port on the back panel and sits on top of your TV. There are several convenient features, including the ability to leave video messages, but on the downside the camera costs around £120.

The 3D features are the same as Panasonic’s standalone Blu-ray players, offering the same selection of 2D-to-3D conversion – with so few 3D discs available, this is a welcome inclusion, although results have been mixed – and a range of adjustments that allow you to make the 3D image more comfortable to watch, including the screen frame feature.

The SC-BTT775 is as easy to use as other systems in the range. The newly revamped main menu is as attractive as it is intuitive, using an engaging colour palette and cute icons. Navigating around the various options is a breeze as each page loads up in a flash, while the logical grid structure means it’s never difficult to find anything. It’s only a shame that the wide range of options means Panasonic had to abandon the ‘one-touch’ operation of its standalone players. Using the remote is a cinch thanks to its sensible button layout, terrific colour coding and clear labelling.

There’s a comprehensive range of settings, including sound modes, EQ settings and manual speaker adjustments. Cinema Surround Plus is the audio highlight, giving the soundstage a sense of height using 11 virtual speakers in the vertical plane and six in the horizontal plane. On the picture side, presets and enhancements like Chroma Process, Detail Clarity and Super Resolution help you fine tune the image.

Playing our copy of Iron Man 2 on Blu-ray reveals the SC-BTT775 to be a surprisingly capable performer. The sound it squeezes out of these lightweight speakers is generally clean and enjoyable, injecting the Monaco Grand Prix scene with enough verve and muscle to raise it well above the quality of flatpanel TV speakers.

It’s a fuller, meatier sound than the BTT370 too, but despite that we still think the subwoofer lacks oomph when conveying the sound of F1 cars crashing to the ground, or the roaring engines on the grid. Dedicated speaker systems like the Teufel Columa really make these sounds rip through you but you don’t get that sense from the Panasonic. There are ways to boost the bass level – the Subwoofer Level settings and H.Bass – but none really hit the spot.

It is, however, a very detailed sound with a crisp, airy feel to it all around the soundstage. High frequencies are clear and well controlled, and only start to sound harsh when you pump up the volume beyond a comfortable listening level. During quiet scenes, it teases out delicate background effects to provide an absorbing backdrop. 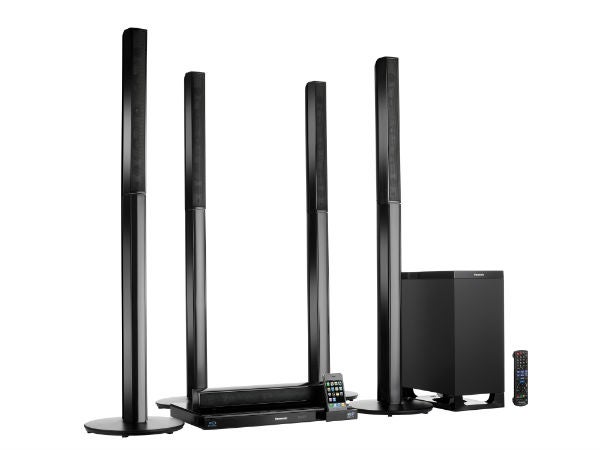 There are other positives too. The satellites, centre and subwoofer integrate nicely without any one channel overpowering the others and the Cinema Surround Plus mode places effects slightly above ear level to create the illusion of height. It’s subtle but effective. What’s more, the soundstage is expansive, with smoothly steered effects.

There are no problems on the picture quality front. Inside the system is the same image tech powering Panasonic’s brilliant standalone players, including Adaptive Chroma Processing and P4HD, and as a result you get stunning pictures from Blu-ray and DVD. Hi-def detail looks phenomenally sharp, backed up by natural colours and clear shadow detail. Switch to 3D and you get more of the same but with added depth – the layers and objects are perfectly composed and free from flaws like blur and crosstalk, resulting in a spellbinding viewing experience. The only disappointment is that 2D-to-3D conversion falls a bit flat.

The SC-BTT775 is far from a perfect home cinema system – the build quality of the towers is disappointing and the audio performance could do with a bit more oomph to compete with ‘proper’ speaker systems from the likes of Teufel or Tannoy. But it’s churlish to complain about sound quality when there’s so much more crammed into this system – 3D, DLNA, Wi-Fi, Skype, HDMI inputs, iPod dock, Viera Cast, the list goes on and on. And for £400, that’s pretty good value in our book, making this well worth a place on your shortlist.