Given their inherent cost limitations, affordable all-in-one systems are never going to match the sound quality of good quality separates, but the SC-BTT560 makes the most of what it has. It delivers a rousing, room-filling sound with a decent sense of scale and thrilling dynamics. There’s a touch of coarseness when the going gets really tough but for the money we really can’t quibble with what’s on offer. 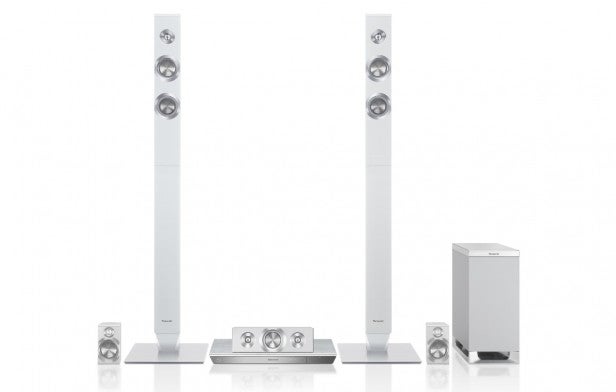 We fired up Hellboy II: The Golden Army and skipped straight to chapter 12 as Hellboy battles the Elemental. The creature’s booming roar and explosions are suitably hefty, and when the beast smashes its tentacles into a building or lobs a car at a helicopter, the effects are fast and forceful. Throughout the scene, dialogue remains audible and surround information is accurately placed and smoothly steered between channels.

High frequencies flirt with harshness at times, but the system has just enough composure to stop you wincing. Only with the volume pushed over 60 per cent does it get a little ragged. The subwoofer does a solid job on the whole, lending urgency and depth to dramatic scenes, but as we found with other Panasonic systems it could be punchier and requires careful tweaking to keep booming and overhang at bay. Thankfully the four sub modes and channel level controls make that fairly easy.

To test the effectiveness of the 3D Cinema Surround technology we skipped back to Troll Market scene, which is enhanced greatly by the technology. As Hellboy steps through the door, you’re immediately encapsulated in a flurry of fluttering fairies and whispering voices floating above the listening position, while the expansive spread of other sounds really make you feel like you’ve been dropped into the heart of this busy, sprawling market. Switch it off mid-scene and everything feels flatter and more constricted.

We won’t pretend the SC-BTT560 is any sort of replacement for a dedicated hi-fi but music playback both in stereo or expanded 5.1 is enjoyable. A docked iPod on shuffle provided the soundtrack to writing this review and it sounded smooth and enjoyable throughout, with pleasing dynamics, crisp detail and good bass weight.

On the visual side there are no complaints whatsoever. 3D pictures are razor-sharp, deeply immersive and stable, boosted by Panasonic’s knack for producing luxurious, faithful colours. 2D pictures are equally impressive, bringing Hellboy II’s grotesque creatures and ornate sets to life with its intense detail reproduction.

Should I buy the Panasonic SC-BTT560?

The SC-BTT560 is an impressive system in many respects, but shortcomings in key areas make it a safe purchase rather than an essential one. On the positive side, its healthy feature list touches on all the latest techno trends like 3D, DLNA and web content, while the built-in iPod/iPhone 5 dock, Wi-Fi, USB and HDMI inputs make it easy to hook up other devices.

Panasonic’s bright and breezy menu system makes it easy to use for beginners and experts alike, and crucially the SC-BTT560’s sound quality doesn’t disappoint. It gets the adrenalin flowing with its powerful, dynamic output, and mostly steers clear of harshness, although it’s a bit raspy with the volume up high and the subwoofer could be punchier.

Of greater concern is the poor build quality of the speakers – the light, plasticky towers lack the solidity you’d expect from a near-flagship system (Samsung and LG’s are much sturdier) while Viera Connect’s content is limited, lacking several catch-up TV and movie services found on rival portals.

So to sum up, we don’t think you’ll be disappointed if you take this one-box system home, but you might be left wondering how much more you could have got for your money from other brands.