What is the Panasonic SC-BTT560?

It’s a 5.1-channel system with a built-in 3D Blu-ray player, bringing you the complete home cinema experience in a single box. As you’d expect from a system positioned just below the flagship Panasonic SC-BTT880, it’s heaving with features like Viera Connect, DLNA streaming, an iPod dock, built-in Wi-Fi and more. Indeed, considering the only real differences are that the more expensive BTT880 has tower speakers front and rear and a wireless sub, compared to the compact rears and wired sub of the BTT560, and the £169 saving looks awfully tempting. 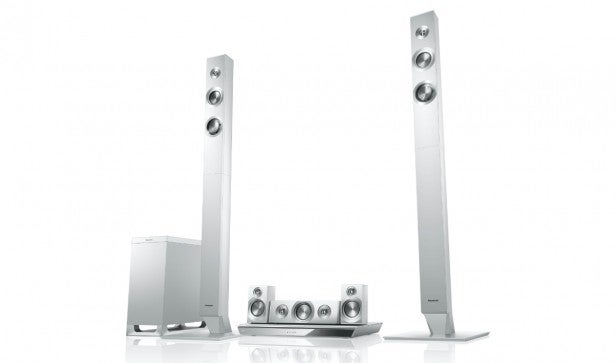 The brains and brawn of the operation is the Blu-ray receiver (SA-BTT560), a slimline deck with an elegant brushed silver finish and jazzy sloping sides. The front flap keeps everything looking neat and minimal, but drop it down and you’ll uncover an SD card slot and USB port, both of which allow you to play media files.

But on the right-hand side is the star attraction – an iPod/iPhone dock with a Lightning connector suitable for playing back and recharging iPhone 5 and newer iPods like the Nano 7G. The dock is hidden away in a pop-out drawer to keep things nice and tidy when not in use. Own an older Apple device? No problem – you can connect it to the USB port and enjoy the same functionality.

The main unit’s build quality is excellent, but sadly the same can’t be said for the tower speakers. They’re fashioned from thin lightweight plastic that lacks the rigidity we look for from home cinema speakers. They also sound worryingly hollow when tapped, which is disappointing from a system towards the top of the range. To be fair, it’s part and parcel of the all-in-one system experience, but having tested most of the competition we’re afraid Panasonic are the worst culprits.

It’s a shame, because once you’ve bolted them to together they look rather stylish in their flashy silver finish, plus the back-sloping section at the bottom and the exposed drivers are attractive flourishes.

Build quality for the rear and centre speakers is better but still below what you’d expect for the money. The rears measure a living-room friendly 143mm high – perfect for perching on a shelf – while the centre is elongated for easy accommodation under your TV. They’re all styled in the same silver finish as the towers with shiny drivers and curved edges. Speaker terminals are all of the springclip variety.

Manual examination of the passive subwoofer reveals more budget build quality – the hollow plinth at the bottom feels particularly plasticky – but again from a distance it looks stylish enough and its narrow width makes it fairly unobtrusive.

A peek at the main unit’s back end reveals a generous array of sockets, chief among which is a pair of HDMI inputs. Not only does that turn the SC-BTT560 into an HDMI switcher for set-top boxes and games consoles (all fed into a single HDMI input on your TV) but you can also play them through the system.

The HDMI output supports ARC, receiving audio from a compatible TV while sending video in the opposite direction. There’s even an HDMI pass-through mode that sends signals to your TV even when the system is in standby.

Other audio devices can be hooked up to the optical digital and analogue inputs, while an Ethernet port is provided as an alternative to the built-in Wi-Fi. A second USB port lets you connect an optional Skype camera if you want to make video calls. That black slot on the left houses the transmitter that comes with Panasonic’s SH-FX71 wireless rear speaker kit. Finally there’s an aerial input for the FM tuner.

Next
Features and Operation Review