What is the Panasonic SC-BTT505?

Ostensibly the SC-BTT505 is just another 5.1 system in a box, but take a closer look at the spec sheet and you get the impression that Panasonic has attempted to create something a little more ‘grown up’ than its previous systems.

With its aluminium-enhanced speaker design, hi-fi driver array and £600 price tag, the SC-BTT505 is looking to win the audiophile vote while retaining all the cutting-edge features and user-friendly operation you normally get from a Panasonic system. 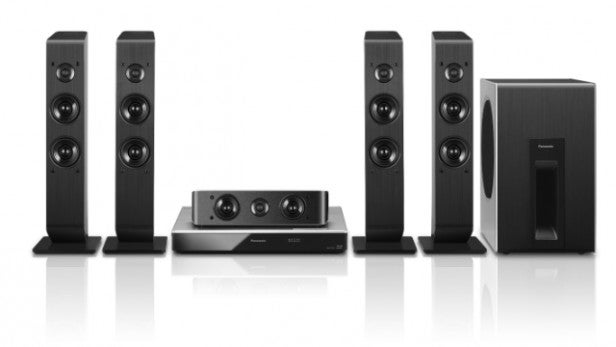 In the box are a Blu-ray receiver unit, four satellite speakers, a slender centre speaker and a chunky passive subwoofer. The design is more daring than anything we’ve seen before from Panasonic, particularly the front and rear speakers which sport classy brushed black aluminium front panels with removable cloth grilles.

The speaker body juts forward on an angled base, while the sloping top surface cascades seamlessly into the front baffle. The aluminium front panels aren’t just decorative – their job is to reduce cabinet vibration.

It’s a good look, giving them the air of speakers from a dedicated hi-fi brand. The only thing that betrays that is the build quality – each part has an unmistakably light and plasticky feel that’s unfortunately all too common among one-box systems – but at least it’s an improvement on previous systems.

At 537mm high they’re not compact but nowhere near as imposing as Panasonic’s tallboy systems – you could get away with placing them on furniture or shelves. The rear speakers can be converted to wireless with Panasonic’s optional SH-FX82 kit. Panasonic sells a version of this system (SC-BTT885) with tallboy speakers if you prefer.

The Blu-ray receiver is also a break from the norm, dolled up in a fetching light silver finish with a black front flap. It’s chunkier than we’ve come to expect from Panasonic, but offers welcome respite in a market obsessed by slimness. A row of basic touch-sensitive controls is found on top alongside an NFC touch panel.

The receiver also boasts a generous array of sockets, allowing it to be used as a hub for all your devices. There are two HDMI inputs and one ARC-compatible output, which will receive audio back from a compatible TV. There’s on-board 4K upscaling too.

The HDMIs are joined by optical digital and analogue stereo inputs, USB and Ethernet ports and a socket for the FM radio antenna. There’s another USB port behind the front flap designated for iPod/iPhone use, although it also allows media playback from USB pen drives, external HDDs (NTFS/FAT32) and iPod/iPhone.

Great stuff, but the biggest surprise on the rear panel is the inclusion of binding posts for the speaker cables, the sort you normally find on AV receivers. Panasonic usually opts for springclips or plugs, so this is another indication of the system’s intentions.

The hefty subwoofer’s measurements (424mm high by 334mm deep) could make it a little tricky to accommodate, but the black finish with silver side panels is weirdly attractive. It also sports binding posts on the back.

The speakers use two 8cm woofer cones and a 2cm dome tweeter in a two-way bass reflex design, which again is a step-up from the single full-range drivers used by many one-box systems. The centre speaker uses a pair of 6.5cm cones, while the sub is endowed with a 20cm woofer.

It’s a useful selection but still lags behind Samsung and LG’s systems, which offer a wider choice of free catch-up TV (ITV Player, 4oD) and apps like Now TV and Spotify.

On the audio side you’ll find the latest incarnation of Panasonic’s 3D Cinema Surround, which adds 31 virtual speakers to the real 5.1 array (a jump up from last year’s 25) to increase the perceived height and width of the soundstage.

Despite the lack of tallboy speakers – the bane of an AV reviewer’s life – the SC-BTT505’s satellites take just as long to put together. They come in three parts (base, stand and speaker) which need to be screwed together. But if you want to hide the cables away you have to thread them through the holes while you’re doing it, which requires patience and dexterity.

Then comes the arduous task of threading and clamping the cables into the binding posts, but it’s a small price to pay for a secure, high-quality connection. These aren’t criticisms as such, but worth bearing in mind if you’re expecting a quick plug-and-play experience.

Once it’s done, Panasonic rewards your patience with an easy to follow installation wizard that runs through all the important settings, including speaker layout and sound modes. Wi-Fi configuration is found elsewhere in the setup menu but is equally easy to carry out thanks to Panasonic’s clear and friendly onscreen presentation. 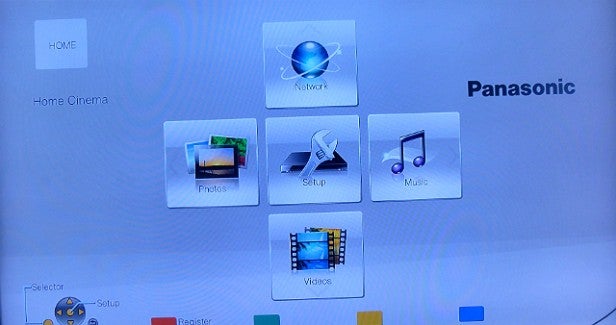 The SC-BTT505 uses the same one-press Home menu as its Blu-ray players, which is an improvement over last year’s systems. The tiles are arranged in a cross to replicate the remote’s direction pad – press the relevant arrow key and it takes you to that submenu. It makes navigation a breeze, and it can even be customised for different users.

The other menus are styled with similar simplicity, using a bold colour scheme and crisp text. It’s more basic than rival menu systems but does the job. We didn’t have any trouble finding DLNA content on our laptop, but there were some delays when loading files and some HD videos would only stream in SD.

The Internet Apps menu could do with a rethink though. It looks attractive enough with its large, eye-catching tiles, but splitting them across a number of pages is a tad cumbersome – at least all the best apps are presented on the first page.

During playback the useful Option menu lets you access all the disc, picture, sound and 3D settings without having to stop the film and go back to the Setup menu.

For the remote, Panasonic hasn’t reinvented the wheel, wisely sticking with the same handset from previous systems. It’s as user-friendly as ever, covered in solid rubber buttons and foolproof labelling, with the playback buttons helpfully coloured blue to make them stand out.

Two small foibles though – the volume keys aren’t prominent enough and we wish the dedicated Netflix button wasn’t so near the direction pad, but otherwise it’s a terrific handset. Alternatively the SC-BTT505 can also be operated by an Android or iOS smartphone or tablet using Panasonic’s free control app.

The SC-BTT505 achieves the best sound quality we’ve heard from a Panasonic system since the flagship SC-BTT590 system it launched in 2012. It delivers an unusually clean and composed sound that doesn’t distort when you crank the volume up, but does so without compromising on scale, dynamics or attack.

The frantic action scenes of Thor: The Dark World on Blu-ray sound terrific through the BTT505’s two-way speakers. The battle at Vanaheim that kicks off chapter 2 sounds massive, with weighty explosions and lasers zipping around the spacious 5.1 soundstage.

And when Thor starts smashing up the marauders, every thump of his hammer is accompanied by a heavy yet well-controlled ‘whomp’. Clashing swords sound clean, voices easily cut through the chaos and the deftly-handled score gives the scene real urgency. It all adds up to an entertaining and immersive performance.

The sound easily fills the room but steers clear of booming and midrange harshness, flaws that have blighted past Panasonic systems. A good example is when the stone warrior strides forward and lets out a huge roar – his footsteps are punchy and accurate, plus the roar doesn’t make your ears hurt as it might on an inferior system. You do have to reduce the subwoofer level to 2 though, anything higher is too overpowering and compromises the sense of cohesion.

The use of two-way speakers results in a more confident and organised presentation than Panasonic’s compact systems. It’s not just a wave of sound coming at you from a bunch of full-range drivers – the use of separate tweeters and woofers offers a sense of separation and openness.

Crisp, attacking mids and highs are responsible for the system’s dynamic character and ensure a pleasing level of detail. The puff of dirt that falls after each explosion is pin-sharp.

We’re also impressed by the system’s surround performance, with swift steering and accurate placement. As for 3D Cinema Surround, we often take such processing with a pinch of salt but here it lends extra fullness and height to the soundstage. When Jane first sees Thor outside the abandoned warehouse, for example, hissing rain fills the room.

The SC-BTT505 backs up its superb sonic performance with jaw-dropping pictures. From the gloomy landscapes of Svartalfheim to the pristine palaces of Asgard, the system ensures every setting is packed with detail and natural-looking colours. Smooth movement and a complete absence of noise keep things looking clean and immersive, particularly when you switch to a 3D disc. 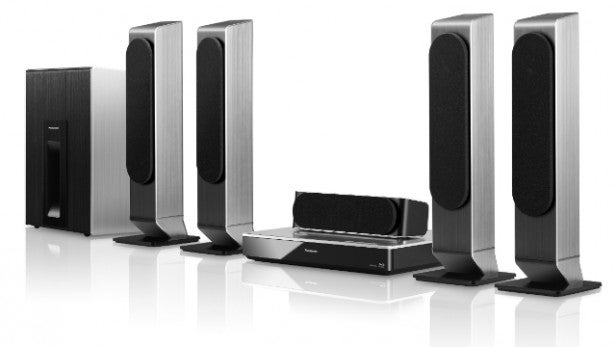 Should I buy the Panasonic SC-BTT505?

The sound quality of most all-in-one systems is nothing to write home about, so it’s worth celebrating when we find one that delivers the goods – and the SC-BTT505 certainly does that. We won’t pretend it’s any sort of competition for a separate speaker system like the Q Acoustics 2000i or KEF E305, but by one-box standards it’s a belter.

Its sound is detailed, dynamic and powerful, but most importantly it sidesteps all-too-common flaws like brashness and boomy bass. That’s all thanks to its new subwoofer and speakers, which take a more serious approach with their two-way design, removable grilles and binding posts.

Throw in a plethora of features like Bluetooth, NFC, DLNA, Miracast and 4K upscaling and this system represents great value. Its only major faux pas is the lack of compelling internet content – if that’s important, you might want to check out Samsung and LG’s latest systems before making your decision.

The SC-BTT505 brings a rare sense of sonic refinement to the all-in-one system market, and backs it up with plentiful features and eye-catching design. Only limited internet content lets the side down.

Next, read our pick of the Best soundbar