Setup is a cinch. Unlike the Panasonic SC-BTT460 and SC-BTT560, there are no tower speakers to bolt together – simply dot the compact speakers around the room on shelves or furniture. The speakers connect to the back of the main unit using colour-coded plugs, and Panasonic supplies extra long cables for the rears.

Panasonic hasn’t upgraded the menus to complement the new My Home Screen interface on its new TVs, keeping the design the same as last year. That’s not a bad thing though, as this menu system is equally appealing. 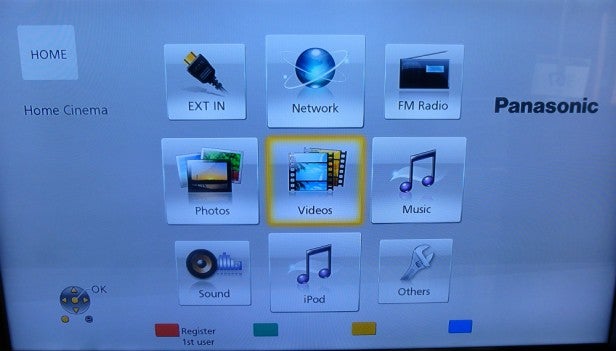 The Home screen is a grid of nine squares, each containing a function or input source. The attractive graphics and fonts are easy on the eye, but more importantly it’s a breeze to navigate. The cursor responds instantly and separate submenus appear in a flash. Like last year’s models you can customise the home page for different users. 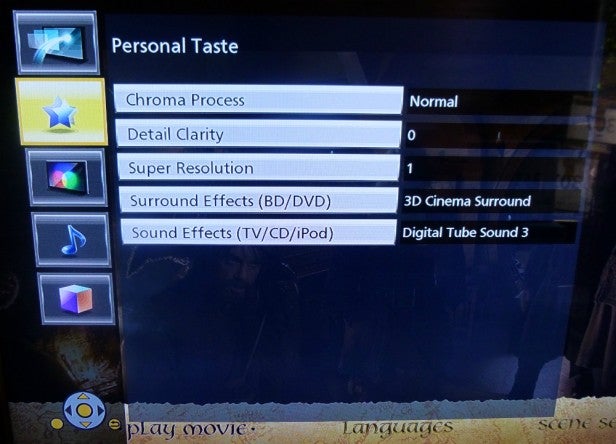 The Options menu is a scaled-down setup menu that can be called up during playback, which is useful given that not all Blu-ray discs have a resume function. Again the design is attractive and it provides a range of picture and sound adjustments under the ‘Personal Taste’ menu. 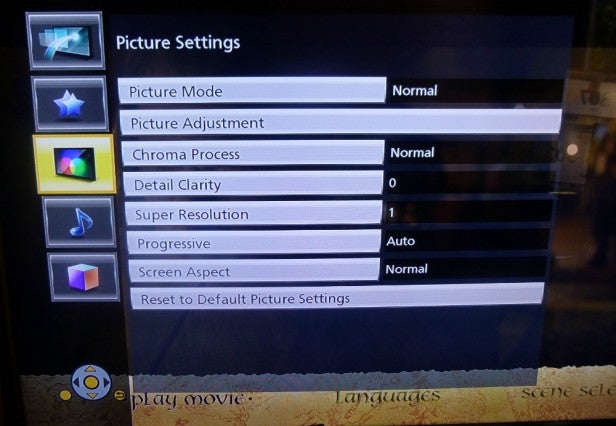 For pictures, these include Chroma Process, Detail Clarity and Super Resolution enhancements. There are five presets, alongside a User mode where you can set the levels of contrast, brightness, sharpness, colour, gamma and noise reduction yourself. Some of these settings are duplicated in separate picture and sound submenus, which is a little confusing.

On the audio side, you can tinker with the various sound modes mentioned earlier, choose from four EQ presets and set the subwoofer level (1-4).

Further sound tweaks can be found in the thorough setup menu, including a menu for setting the channel levels with a test tone. A quicker way of setting channel levels is to use the ‘CH Select’ button and the front panel display. 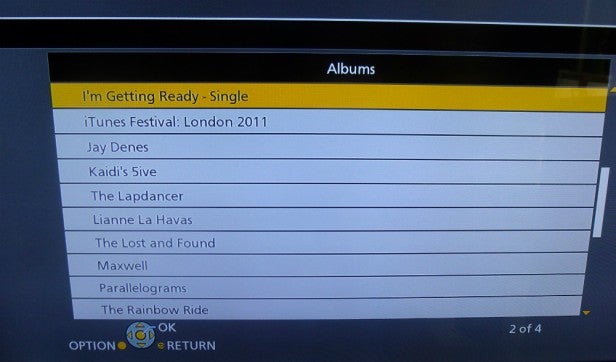 The media playback menus are basic, displaying songs in lists against a grey background. When playing a track, cover art is displayed alongside all the relevant details over an colourful background.

Year after year Panasonic keeps faith with the same remote control for its Blu-ray systems, and it’s not hard to understand why. It wears its user-friendly heart on its sleeve with chunky rubber buttons, clear labelling and a natural layout. It won’t look particularly classy on your coffee table but it gets the important stuff right.

Like any all-in-one system, the SC-BTT500’s performance has to be judged in the context of its price and on that score it’s very impressive.

When spinning The Hobbit on Blu-ray, the relentless action scenes are handled with bags of energy and power, but there’s a level of smoothness and warmth often missing from budget one-box systems.

The opening flashback to Smaug’s attack on Erebor is a thrilling aural experience. As the dragon swoops through the trees and blasts the battlements with fire, the rumble is deep and menacing. He smashes through buildings with a fierce crash and stomps his way into the dwarf city with muscular, room-filling footsteps.

Meanwhile the dramatic choral score sounds clean and silky and Ian Holm’s narration has a rich, authoritative quality. Dialogue reproduction is perhaps the system’s forte, giving voices body without clouding what’s being said – no mean feat given the variety of weird vocal tones throughout the movie.

The action is forceful but not brash or strident, even when you push the volume fairly high. It does strain slightly as the dragon roars, particularly from the rear speakers, but for the most part its sound is surprisingly composed.

It’s bulked out considerably by the powerful subwoofer. Too powerful some might say – it tends to overwhelm the other speakers in its default settings, but it’s easily tamed using the subwoofer level controls (we’d recommend not going any higher than level 2).

It’s not particularly tight or focused though, lingering a little too long on short bass hits, and rumbles indiscriminately with little subtlety or variation. But on the plus side its low, rich tones make everything sound warm and fuzzy, which is instantly gratifying.

Also impressive is the system’s handling of high frequencies. As the dwarves mine for gems there’s a beautifully clear chinking sound that subtly echoes off the walls, while the delicate rustle of the dragon kite in the wind is crisp.

The rear speakers immerse you in sound effectively, offering good separation, tonal consistency, width and detail. This is enhanced by 3D Cinema Surround, which swallows up the room in sound. Despite losing accuracy in effects placement, the sound is richer and fuller – turn it off and everything suddenly seems thin. 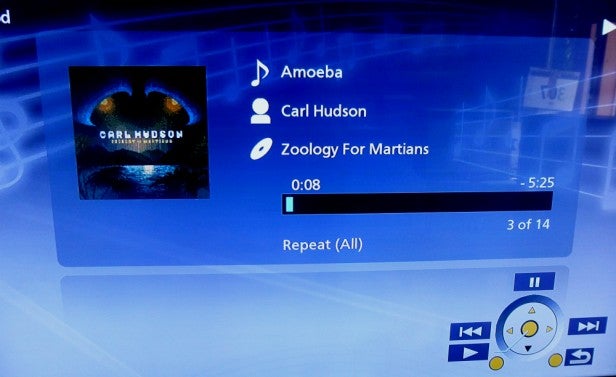 The system also makes music sound warm and smooth. Playing Carl Hudson’s Zoology For Martians from a docked iPod, the Rhodes keyboard and synths sound suitably rich and colourful, while drums are crisp and basslines are punchy.

On the visual side, the Panasonice SC-BTT500 is a top-drawer performer whether you’re watching in two or three dimensions. There’s a jaw dropping amount of detail in the picture – making CG shots of Goblin Town or Rivendell seem all the more spectacular – while the system’s colour palette is wonderfully natural, from pale Elven skin tones to the full-on greens and browns of Mirkwood.

Switch to 3D and the layered picture is utterly entrancing thanks to the excellent motion stability, sharp detail retrieval and believable colours.

Should I buy the Panasonic SC-BTT500?

Even the most skilled lawyer would have trouble arguing that the SC-BTT500 represents anything other than terrific value for money.

Let’s look at the evidence – you get a built-in iPod dock and Wi-Fi, internet content on tap and network media streaming as standard, plus loads of connections, a chic design and AV performance that outstrips many all-in-one systems at this price.

The prosecution might counter that Viera Connect’s selection lacks killer catch-up TV content – as found on Samsung’s Smart Hub – and point towards the plasticky speaker build quality. They may even grill the defendant on the subwoofer’s loose, overpowering performance and occasionally shouty sound.

But ultimately the judge would find in favour of the defendant by virtue of its alluring sub-£400 price tag, before sentencing the buyer to reach for their wallets and pick up one of the best budget Blu-ray systems around.

The Panasonic SC-BTT500 is a superb all-in-one home theatre that’s perfect for anyone who wants a good value, simple to set up sound system on a reasonable budget.