Rear connections are plentiful. You’ll find a pair of HDMI inputs, which lets you play other components through the system (a digital TV box and games console, for example) and an ARC-compatible HDMI output. An HDMI standby pass-through mode means you don’t have to switch the system on to view connected components – a useful feature given that people don’t want surround sound every single time they watch TV.

And with built-in Wi-Fi you won’t need to use the rear USB port for a LAN dongle, leaving it free for Panasonic’s communication camera should you fancy taking advantage of Skype.

Joining these are analogue stereo, optical digital and FM antenna inputs, plus an Ethernet port and colour-coded terminals for the speaker cables. A slot on the right-hand side allows you to connect a digital transmitter and beam audio to the rear speakers wirelessly, though for this you’ll need to invest in Panasonic’s optional wireless system (SH-FX71) that’s £100 extra. This also lets you upgrade to a 7.1 system by adding two extra surround back speakers.

Apart from the iPhone 5-compatible dock, the spec is pretty much the same as last year’s systems. But that’s not necessarily a bad thing as there’s a veritable feast of features on board, headlined by Viera Connect. 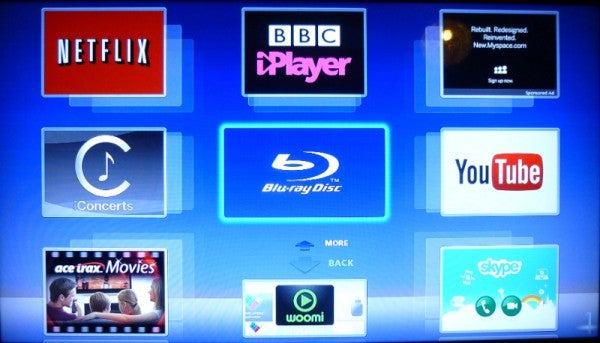 Sounds cool on paper, but it’s underwhelming in practice. For starters, there’s no ITV Player, 4OD and Demand 5 – all of which are found on Samsung’s latest systems. There are no plans to add these this year (although if Panasonic does, it should only take a simple software update to get them). 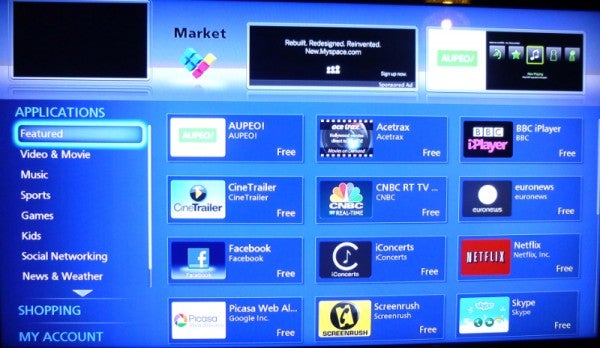 There’s a wealth of other apps available for download in Viera Market, but we’re interested in quality not quantity and without more catch-up TV Viera Connect will always play second fiddle to Samsung. It also splits apps over a number of pages, which makes navigation feel laboured.

As you’d expect, the Panasonic SC-BTT500 lets you stream media files from DLNA servers on your home network, as well as recordings made on network-attached Panasonic recorders. If your media server is not DLNA compliant then you can still stream files using the Network Drive Connection (after manually adding the IP address) or you can play files from USB storage devices.

Format support over a network covers AVCHD, WMV, MP4, JPEG, MP3, AAC, FLAC and PCM. But from a USB drive you can additionally play MKV, WAV and MPO. Disappointingly there’s no support for DivX at all. You can play AVCHD, MP4, MPEG-2, JPEG and MPO from SD/SDHC/SDXC cards.

The SC-BTT500 is 3D ready, decodes Dolby True HD and DTS HD Master Audio and comes equipped with Panasonic’s 3D Cinema Surround, which combines the five real speakers with 25 virtual ones, giving the impression of a wider, higher and more immersive sound.

There are loads of other modes to experiment with, including Dolby Pro Logic II, 7.1 Virtual Surround, H.Bass, Super Surround (which plays stereo from all speakers), Centre Focus and Digital Tube Sound, which attempts to mimic the characteristics of a vacuum tube amplifier. Elsewhere the new Lincs-D amp aims to reduce jitter and distortion that can affect audio clarity, while an on-board FM radio completes the picture.

If you want to save cash, a cheaper version of the SC-BTT500 (SC-BTT400) shaves £90 off the price by removing the built-in Wi-Fi, HDMI inputs and the iPod dock.