With Blu-ray soundtracks, the SC-BTT460’s performance doesn’t dazzle like a decent separates system, however it does achieve a dynamic, immersive sound that greatly enhances your viewing experience – like any good surround system should. 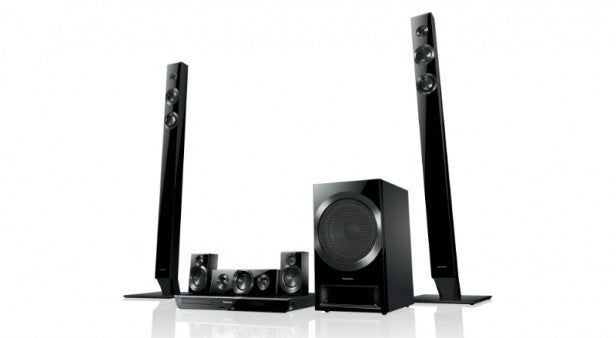 We loaded up X-Men: First Class and during the movie’s pivotal action scenes the SC-BTT460 remained in complete control as it pinged effects around the 5.1 soundstage. There isn’t a hint of harshness – something past Panasonic systems have been occasionally prone to – leaving you with a smooth and composed sound that easily fills the room.

This feeling intensifies when you activate 3D Cinema Surround, which makes the soundstage feel fuller and more immersive. It won’t be for everyone, but there’s no denying the impact it makes on the sound.

So, just as Magneto starts lobbing missiles around at the movie’s finale, they move swiftly from speaker to speaker with a seamless ‘whoosh’, while the explosions are tight and forceful. It’s all underpinned by the Panasonic’s crisp reproduction of the dramatic score.

Everything sounds nicely balanced and cohesive – the subwoofer locks tightly to the satellites with surprisingly little flab, although we did need to trim its volume and turn off the H.Bass mode to calm the overpowering default settings. As a passive unit it lacks the chest-thumping punch and agility of an active sub, but still does a stand-up job.

The system also teases out a healthy amount of detail from the DTS HD Master Audio track. Granted, a separates system with more accomplished speakers would dig out more textures, but the crisp, open sound is sure to satisfy.

Likewise dialogue, articulated with impressive clarity even in the midst of a busy action scene. If you want it even clearer, a Centre Focus mode makes speech sound like it’s coming from the middle of the TV.

It also turns in a pleasant music performance, injecting plenty of detail and bass into the mix while keeping harshness at bay, but stopping short of the wow factor.

The SC-BTT460 is also a terrific picture purveyor, displaying 2D Blu-ray images with a level of clarity that’ll leave you spellbound. Patterns and intricate textures look clean and stable, while edges are hard and tightly contained.

It also delivers a rich and vivid colour palette. The bold hues of X-Men: First Class look outstanding, from the bright yellow of the superhero suits to Beast and Mystique’s bright blue skin. But it’s testament to the system’s visual versatility that it can convincingly reproduce skin tones within the same frame without making them look reddish or overcooked.

3D pictures conjure up more of the same stunning picture quality. Our Avatar disc is a mesmerising watch – smooth, effortlessly absorbing and bursting with colour and detail.

We’re also impressed by the quality of web video streamed from Viera Connect, particularly BBC iPlayer. The pictures have some fuzzy mosquito noise here and there but otherwise the pictures look almost as good as a regular SD Freeview broadcast.

The SC-BTT460 is an impressive 5.1 system for the money, with snazzy looks and an extensive (if not exhaustive) feature set. It turns in an entertaining performance, reproducing movie soundtracks with enough detail, power and composure to satisfy casual listeners without matching the finesse, dynamics and subwoofer slam of a good separates system.

It’s also simple to use and provides several ways of listening to music, with support for a healthy range of formats. There are some useful web apps too, while DLNA media streaming is always welcome – although you’ll need an optional dongle to access these features wirelessly.

However, we’re a little disappointed that the SC-BTT460 doesn’t really move forward from where last year’s systems left off. It’s clearly an ‘if it ain’t broke’ approach, but some new features would have been nice – DAB radio or Bluetooth perhaps – and some jazzier media playback menus.

But the biggest disappointment is that we’ll have to wait at least another year before Viera Connect is revamped – here it uses the same cumbersome multi-page layout as last year, with no new big-name apps to get excited about.