As you’d expect from a one-box solution, setup and operation are a piece of cake. The first thing that greets you when you turn the SC-BTT460 on for the first time is a setup wizard that runs through all the basics, including a sound check and network setup. The instructions are friendly and self-explanatory with helpful illustrations. Our review sample even launched into a firmware update as soon as we tried accessing the online features. 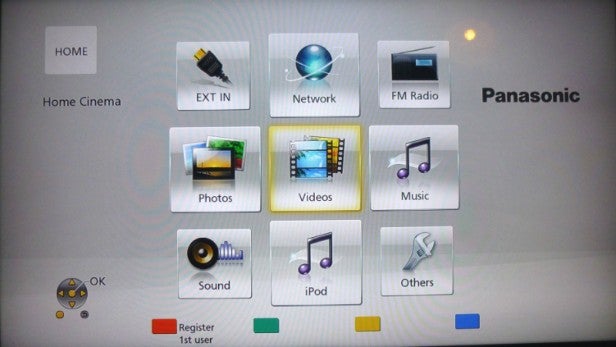 The Home Menu design is the same as last year, which is great news because the layout is excellent. It’s a grid of nine icons, each one providing access to a key function. The graphics are crisp and colourful, plus the cursor moves responsively around the grid. From here you can select sources, play a disc, access web or DLNA content and visit the setup menu. 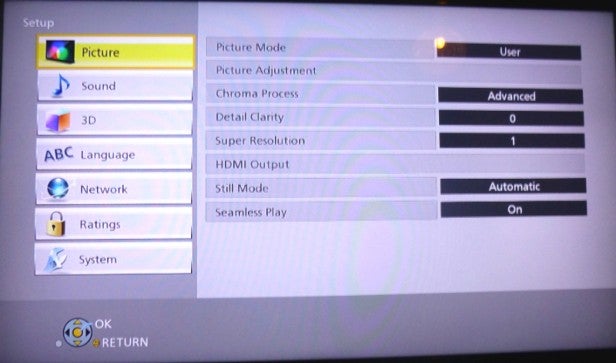 Just like last year’s models, you can also customise the home page for multiple users with different wallpaper and link a smartphone to each account. With a camera attached, the system also offers facial recognition, selecting the relevant menu when it detects a face.

Although the operating system is perfectly usable and looks pleasant, we’re a bit disappointed at the lack of progression in some areas. The DLNA and USB playback menus, for example, work fine but look drab and clunky with their grey backgrounds and chunky text boxes. Compared with the jazzy displays of the latest Samsung players, the BTT460 seems positively antiquated.

It also doesn’t help that Panasonic hasn’t revamped Viera Connect on this year’s AV products. With apps arranged over several pages, it lacks the slickness and immediacy of rival web portals. It’s the norm for new TV web portals to filter down to AV products a year or so later, but this GUI is in desperate need of a overhaul.

Elsewhere, the Options button superimposes a helpful menu over the picture, allowing you to tweak things while a movie is playing. It includes Personal Taste and Picture Settings menu, which confusingly overlap – both provide access to Chroma Process, Detail Clarity and Super Resolution picture enhancements. 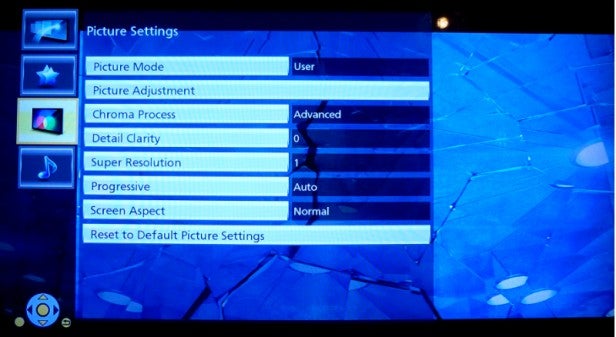 Within Picture Settings you’ll also find a number of picture presets, including a User mode with contrast, brightness, sharpness, colour, gamma and noise reduction settings. It’s a moot point whether these are better than your TV’s settings but there may be benefits to tweaking the picture at the source.

The remote also hasn’t changed a great deal since last year. The large, spongy buttons, clear text and convenient layout are all the same, making it easy to use from the word go. The menu controls are perfectly placed for the thumb too, surrounded by Internet, Home and Pop-Up Menu buttons, while the bright blue coloured playback keys really stand out.

Three buttons at the bottom allow you to adjust the sound levels and surround modes, including volume controls for each channel. However these are only displayed on the unit’s front panel and not on-screen. There are also buttons for direct access to Netflix, iPod playback and Skype. If we’re being picky the volume buttons could do with being more prominent, but it’s a minor criticism.

If you prefer, you can control the SC-BTT460 using an iOS or Android smartphone or tablet running the free Panasonic Theater Remote app. It’s the same app used for the 2012 products, but has been updated to support the 2013 models (version 1.1.0). 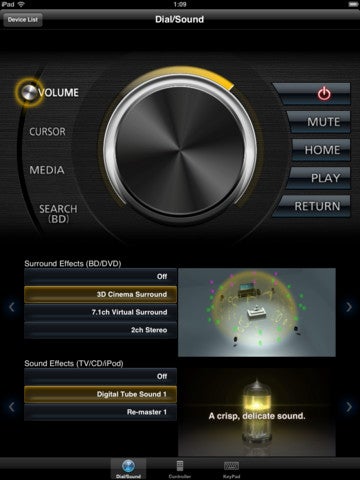 It’s a terrific app, with a clear layout that allows you to control every function with ease. There are three different menus – one that mimics the look of the real remote, a keypad and one that controls the various sound modes, dominated by a large volume dial.