Panasonic offers a wide range of all-in-one Blu-ray systems covering rooms and budgets of all sizes, and although not the cheapest, they usually offer a combination of snazzy features and decent performance. This year Panasonic has added a bunch of 3D-capable systems to the line-up, including the SC-BFT800 soundbar we tested recently and the SC-BTT350, a more conventional 5.1-channel system.


The SC-BTT350 comes with a main unit that houses a 3D-ready Blu-ray player and receiver, which supplies 1,000W (RMS) of power and decodes all of Blu-ray’s HD audio formats. Also in the box is a set of five miniscule satellite speakers and a small passive sub, all designed to squeeze unobtrusively into a small room. There’s an alternative version of this system (SC-BTT755) that comes with tallboy speakers for the fronts and rears plus a longer centre speaker.

Aesthetically, Panasonic plays it safe with the main unit, which lacks the living-room friendly allure of a Samsung or LG system. It’s a straight-up black box with an LED display that shines through a flap on the right-hand side. Lower that flap and you’ll also uncover an SD/SDHC/SDXC card slot for playing back JPEG images, AVCHD and MPEG-2 (SD) video, as well as adding memory for BD Live downloads. It’s joined by a USB port, another outlet for your digital media collection, and a couple of playback buttons. On top of the unit, an iPod dock is discreetly hidden under a flap, which completes a very impressive array of multimedia connections.


Although it’s not the prettiest machine we’ve encountered, it’s certainly well built, but we were expecting more connections on the back. There’s an HDMI v1.4 output (which supports the Audio Return Channel feature as well as 3D), but no HDMI inputs for your games consoles and TV receivers. Still, there are optical digital and analogue stereo audio inputs, composite video output and an FM radio aerial input. The Ethernet port provides a wired connection to the web and helpfully there’s another USB port for Panasonic’s Wi-Fi dongle, although this is an optional extra that’ll set you back around £80.


The front and rear speakers measure just 118.5mm high and are surprisingly solid. The cloth-covered fronts are a nice touch and there are holes on the back for easy wall-mounting. All of the speakers are equipped with springclip terminals, but the supplied cables have pre-attached, colour-coded plugs that securely connect to the main unit. The subwoofer’s light and hollow enclosure and ugly exposed chipboard on the back leave a lot to be desired but that’s not surprising at this price.

Many of the SC-BTT350’s features are imported from Panasonic’s standalone Blu-ray players. They include access to Viera Cast, Panasonic’s easy-to-use online portal, which currently offers such delights as YouTube, Picasa, Dailymotion and Bloomberg. The system is also DLNA-certified, which means you can also use the wired or wireless Internet connection to stream music, video and pictures from Windows 7 PCs (or recordings from Panasonic HDD recorders) using a series of effortlessly clear folder-based menus. The system will also play DivX Plus HD, MP3, MKV and JPEG from USB sticks. 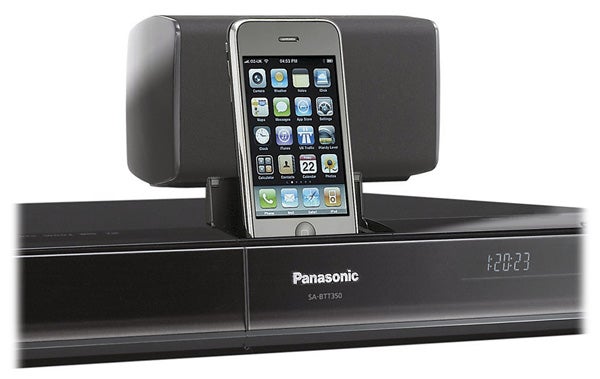 Also worth a mention is its support for wireless rear speakers, but you’ll need to stump up £100 for the wireless kit. With this installed, rear channel information is beamed from a digital transmitter connected to the main unit to a receiver at the back of the room hooked up to the rear speakers, saving you the hassle of hiding long cables. You can even add a second SH-FX71 kit with an extra pair of speakers and upgrade to a 7.1-channel system. 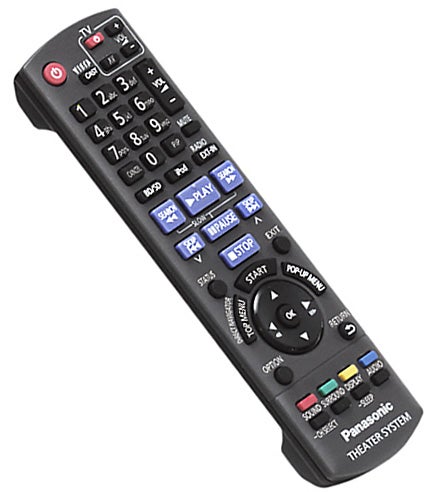 Also on board is Panasonic’s regular array of sound modes, which includes Dolby Pro Logic II, 7.1-channel Virtual Surround, H.Bass, Center Focus and Whisper Mode Surround. They’re joined by four EQ settings – Flat, Heavy, Clear (our favourite) and Soft – four subwoofer settings and manual volume adjustments for each channel, which are useful as there’s no automatic calibration. There’s also a choice of picture presets sensibly accessed from an in-playback ‘Display’ menu so you can instantly see what effect they have on the movie. The same menu offers a few more AV enhancements, such as Detail Clarity, Dialog Enhancer and Re-master, which boosts high frequencies for music.


Like most of Panasonic’s systems, the SC-BTT350 is easy to use thanks to its clear, colourful onscreen displays and excellent remote, which is almost toy-like in its simplicity. In general, there’s a speed and slickness about the way the system works that makes for a satisfying user experience. The logical layout of the setup menu makes initial installation a breeze, while the main ‘Start’ menu is attractively presented. During playback, you can access the Display menu mentioned above as well as a separate Options menu that brings up a list of other frequently used functions to save you stopping the movie.

It took 69 seconds to load our ”Terminator Salvation” Blu-ray disc, which isn’t super-fast but quick enough to ward off frustration. And in terms of picture performance, the SC-BTT350 does a fantastic job, thanks in part to the Panasonic Hollywood Labs-developed picture tech (such as P4HD and PHL Reference Chroma Processing Plus) that has now been applied to 3D images. 3D performance is every bit as good as the SC-BFT800, offering a crystal-clear presentation of Monsters Vs Aliens’ intricately layered backgrounds, characters and objects. A shot of asteroids floating in space is particularly well handled; keeping blur at a minimum and making it feel like you’re about to bump into one.


We’re also fans of its 2D performance. Every last scrap of ”Avatar’s” complex CG detail is dragged from the disc and displayed on screen, giving the image wonderful depth, sharpness and vibrancy. Everything from skin textures to patterned jungle flora is rendered with almost hypnotic sharpness; evoking the exact sense of wonder that Blu-ray was designed to deliver, while Pandora’s psychedelic colour palette looks as good as it’s ever done. Clean, stable upscaled DVD images complete an excellent picture performance.

If only the system was able to replicate that sense of wonder in the sonic domain – sadly the sound is too unrefined to confound our expectations. With ”Avatar’s” busy action scenes, the cacophony of effects is a little sharp and shouty for our liking, and lacks the levels of dynamism and oomph needed to really get things going. Although the subwoofer’s presence is felt, it’s too low in the mix to make a telling impact, even at its highest setting – greater tautness and potency would have taken it to the next level.


But let’s put things into context. Criticising a system like this for not sounding like pricier separates is like berating a bicycle for not going faster than a car; it’s simply not designed to. The BTT350’s aim is to deliver 5.1-channel surround at a bargain basement price and as such, it does a terrific job, despite the inevitable sonic sacrifices.


In fact, for the money there are actually a lot of things to admire. There’s impressive steering and integration between the channels, achieving a consistent unified tone across the soundstage; dialogue is clearly and authoritatively delivered and it manages to dig out lots of detail from HD audio soundtracks. Music also sounds crisp and well balanced, which is particularly good news for iPod owners.


After coming to terms with the fact that the SC-BTT350 doesn’t offer world-beating sound quality – and only a fool would expect it to at this price – you can focus on its many virtues, such as hi-def 3D playback, a packed feature list and exceptional ease of use. So if you’re looking for a cost-effective, convenient way of getting 3D, hi-def and surround sound in one fell swoop, then the SC-BTT350 deserves a place on your shortlist, if not necessarily at the top.