The SC-BTT270 is the 5.1-channel version of the 2.1-channel SC-BTT262, but despite the increased number of speakers it still won’t take up much extra space in your living room. That’s because the supplied satellites are extremely compact, with each one measuring 80(w) x 117(h) x 70.5(d)mm. That makes them easy to accommodate on bookshelves and other furniture in the room, a far cry from the tall space-hogging towers supplied with the upmarket SC-BTT775 system.

They also look very dashing in their glossy black finish and slightly curved sides, with a meshed front panel concealing the single full-range driver within. The plasticky back section and springclip terminals remind you this is a budget home cinema system, but on the whole build quality is solid. You also get a centre speaker in the box, which is slightly larger than the other satellites and lies horizontally. The subwoofer is the same passive affair supplied with the SC-BTT262, complete with its gloss-black front panel and compact dimensions of 145(w) x 289.5(h) x 258(d)mm, which, like the satellites, makes it easy to accommodate. 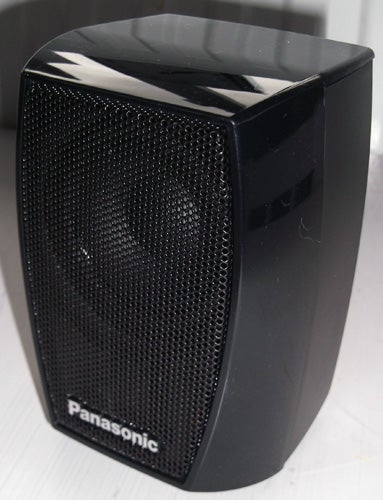 The speakers are styled to match the main Blu-ray player/receiver unit, which also boasts a black finish and measures a ridiculously slim 38mm high. In fact, looking at the unit you’d be forgiven for thinking it was just a player – this slimness is mostly down to the use of a space-saving Clear Sound Digital Amplifier.


There’s also a pleasing lack of clutter on the fascia – apart from a couple of buttons along the top, everything is hidden behind a flap that drops down and rises when you open and close the tray. Lurking behind here are an SD card slot, USB port, a couple of other buttons and the illuminated display. 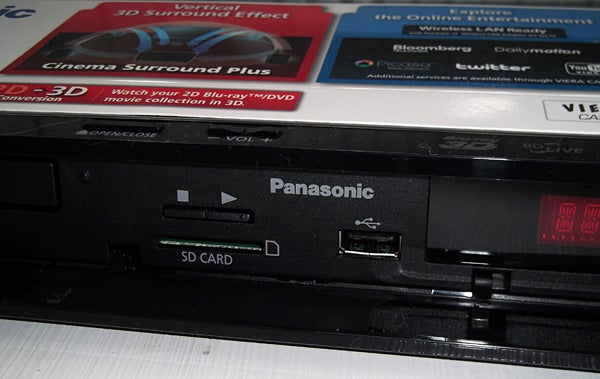 The right hand side of the fascia is given over to a built in iPod/iPhone dock, which pops out when you press the panel. This has always been one of the best things about Panasonic’s systems, providing a much more elegant iPod solution than simply throwing a detachable dock in the box.

The rear panel is a bit more interesting than the SC-BTT262, but like its 2.1 sibling you don’t get any HDMI inputs for external equipment. This time you do get a second USB port that allows you to connect Panasonic’s DY-WL10 wireless LAN adapter (802.11a/b/g/n), which could be a godsend if the thought of running an Ethernet cable round the room to your router fills you with dread – although at around £80 it’s not a cheap solution, and you can’t use a cheaper alternative.

As we’ve discovered with the other Panasonic’s players and systems we’ve reviewed so far, this year’s range is absolutely packed with features. There aren’t quite as many here as say, the step-up SC-BTT370, but what’s left is a satisfying range of tricks to keep you entertained.


Away from its main Blu-ray playback responsibilities, the headline act is DLNA networking, which makes it a complete breeze to access any media content trapped on a Windows 7 PC or NAS drive. It works over Ethernet or wireless LAN and the list of supported file types includes DivX HD, MKV, MP3, WMV and JPEG. Browsing through your files is surprisingly simple thanks to the straightforward layout of folders and files, with useful onscreen instructions to help you along. 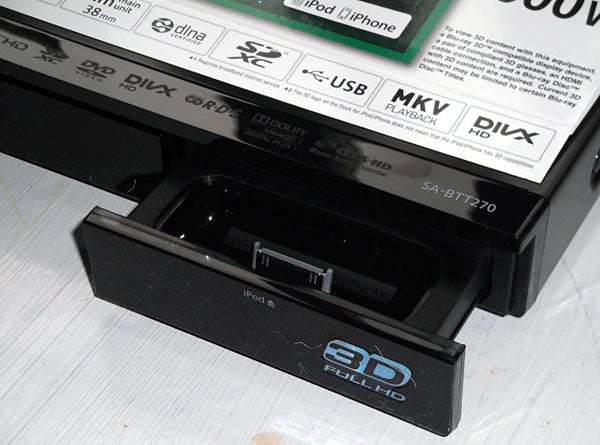 
And while you’re hooked up to the web you can also explore a number of internet applications from the comfort of your armchair through Viera Cast. Here you’ll find YouTube, Picasa, Twitter, Dailymotion, Bloomberg, Euronews and Acetrax, as well as several foreign language sites. This still pales in comparison to rival services like Sony’s BRAVIA Internet Video.


It’s a modest selection with only one or two sites that we could envisage wanting to visit regularly, which is why it’s a shame Panasonic’s improved Viera Connect service hasn’t yet made it to the Blu-ray range. But we can’t fault the layout, which is eye-catching yet logical, laying out the sites as thumbnails advertising the content within, and there are no pesky delays when using it.


Then of course there’s Full HD 3D playback and the new range of 3D features. You get 2D-to-3D conversion, potentially turning your entire movie collection into 3D at the push of a button, plus a range of 3D effect controls. These include the ability to adjust the layering depth and Screen Frame, which inserts a border around the sides of the picture to blend it more gently with the surrounding TV bezel. We don’t really like having our precious picture eaten up in this way but some people may find the resulting picture more comfortable to watch. 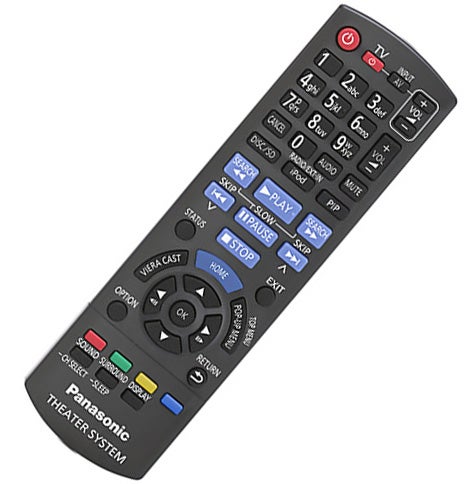 Panasonic has also introduced a few new audio features, the most interesting of which is Cinema Surround Plus. This new and improved version of last year’s Cinema Surround attempts to expand the soundstage to make it sound more like a real cinema.


It does so by creating 11 virtual speakers in the horizontal plane and 11 in the vertical plane, surrounding you around and above the listening position. It does so using fairly complex acoustic theories like ‘head-related transfer function’, playing on the human brain’s perception of the direction in which the sound is coming from, as well as creating a phantom image using sound lag and level control.


Also on board is 7.1 Channel Virtual Surround, although quite how that works with Cinema Surround Plus isn’t clear, as they can both be activated at the same time. High Clarity Sound shuts off analogue video circuitry for a cleaner audio signal; Digital Tube Sound aims to replicate the warmth of a vacuum tube amp; 96kHz Surround Re-master provides ‘brighter’ high frequencies; Subwoofer Level and H.Bass boost low frequencies; and there’s a bunch of picture tweaks too, available when you hit the ‘Display’ button on the remote.


Elsewhere you get all the other goodies you’d expect, such as media playback from USB memory devices and SD/SDHC/SDXC cards (required for BD Live downloads) and HD audio decoding.

We had no problems rigging up the system thanks to the colour-coded plugs attached to the supplied speaker cables, which slot securely into the terminals on the rear. Unlike the SC-BTT370 there’s no provision for wireless rear speakers so unfortunately you’ll have to find a way of concealing the lengthy cables.


The main Home menu’s brilliant layout makes it easy to find your way round, even though you lose the one-touch navigation we loved on the standalone players. The icons are cute, the colour scheme is dazzling and the Settings menu couldn’t be more straightforward. Add to that a busy-but-intuitive remote and you’ve got one of the most user-friendly systems around.

In action, the system’s sound quality is surprisingly good considering the size of the speakers. Throwing it straight in at the deep end with ”Hellboy II”, this fantasy blockbuster sounds lively and dynamic. As Hellboy battles the Forest God, the system orchestrates the frenzied mix of effects with relish – crunching concrete, crashing cars, explosions and booming footsteps are punchy and forceful, while the rear speakers channels provide well-timed, atmospheric surround support.


The clarity of dialogue is also impressive, allowing speech to be heard no matter how frenetic the surrounding action. John Hurt’s voiceover at the start of the movie is smooth and rich.


We gave Cinema Surround Plus a shot, and although it’s effects aren’t life-changing, you certainly get the sense that ‘high’ effects, such as helicopters flying overhead or rain, appear to originate a little higher up than they do when the mode is switched off. The sound also engulfs you slightly better, although you lose some of the distinct placement of standard surround sound.

On the downside, there isn’t as much detail in the sound as we’re used to from more proficient separates – in the wake of the Forest God’s death, for example, the delicate rustling and crunching as plant life grows on the sides of buildings is a little difficult to hear, leading to a lack of openness. You also don’t get the gut-wrenching power you’d expect from a 1,000W system, but enough to get the heart pounding.


The subwoofer isn’t quite as tight and responsive as we’d like either, but to be fair it’s still better than expected, rarely sounding boomy or disconnected from the satellites. It also lends a decent bed of bass to music playback.


And as per usual, there are no qualms whatsoever when it comes to picture quality. This year’s Panasonics are delivering some of the sharpest and most nuanced Blu-ray pictures around, guaranteed to lower the jaws of anyone you show them to.


That goes for 3D as well as 2D. When viewed on a decent 3D telly, such as the TX-P46VT20, the results are staggeringly good – deep and immersive with no ghosting to ruin the effect. 2D to 3D conversion is a mixed bag though, working well with some discs (”Avatar”) but of no use with others (”Inception”, ”Iron Man 2”).


The amount of features on offer, coupled with the spellbinding pictures and crisp, dynamic surround sound, makes the SC-BTT270 worth considering. Sure, it lacks built-in Wi-Fi, there are some sonic shortcomings and 2D conversion isn’t quite as good as it sounds. But even so, there are enough positives to earn this system a place on your shortlist.