We’ve recently checked out three of Panasonic’s 2012 standalone 3D Blu-ray players, all of which mix abundant features with the company’s incredible picture quality. But if you want to get yourself a sound system at the same time, you might want to check out Panasonic’s wide range of all-in-one systems. 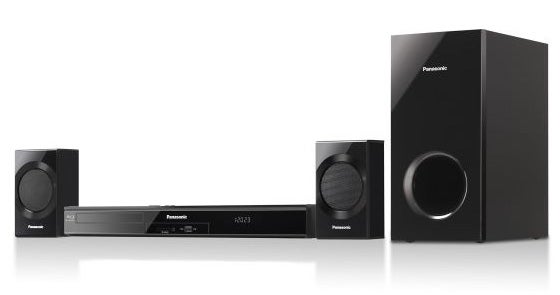 The one we’re looking at here is its entry-level 2.1 channel system, the Panasonic SC-BTT182. As well as a combined Blu-ray player and AV receiver, which outputs a claimed 520W of audio power, you get a pair of compact speakers and a passive subwoofer in the box. That makes it an ideal choice if you want bigger, louder sound than TV speakers can provide, but simply can’t accommodate larger towers or surround speakers in your living room.

Design
The speakers supplied with the Panasonic SC-BTT182 measure just 139mm tall by 80mm wide, a perfect size to plonk on top of your TV stand without getting in the way. Their shape is a straightforward cuboid with no curves, but the gloss black finish gives them all the elegance they need. If you want to save even more space, they can be mounted on the wall using the holes on the back.

The plasticky cabinets aren’t up to the same standards as a dedicated speaker system a la Wharfedale or Boston Acoustics, and the plastic springclip terminals are par for the course, but they’re solidly put together and look stylish. Step up to the higher-end SC-BTT282 and you get slightly larger speakers, the same ones that accompany Panasonic’s flagship SC-BTT590.

The passive subwoofer is much smaller than most bass boxes, measuring 289.5mm high. It’s the perfect size for tucking away in a corner, although with its matching gloss black finish it’s attractive enough to have out on show. A large port on the front is the only feature of note, while a pre-attached cable pokes out of the back. Being a passive sub there are no controls to worry about, as its performance is all governed by the receiver.

Talking of which, the main unit is a typically conservative box, slightly fatter than Panasonic’s Blu-ray decks and styled in a neutral gloss-black finish. An LED display panel shines through the front panel giving the usual running time information, and unusually the USB port and SD card slot are permanently out on show and not tucked away under a flap, making them even easier to access.

Connections
On the back is a limited array of sockets, including an HDMI output (3D and ARC-compatible, natch), optical digital and analogue stereo inputs, a second USB port, an Ethernet jack and an antenna input for the FM radio tuner. The USB port lets you play back media from flash memory devices, as well as supporting direct iPod or iPhone playback (with onscreen playback menus and operation with the system’s remote).

The step-up Panasonic SC-BTT282 adds two HDMI inputs, allowing you to pipe external sources through the system, and a built-in iPod dock tray on the front.

Features
The Panasonic SC-BTT182 does not come with built-in Wi-Fi – to get it you need to purchase a Panasonic wireless LAN adapter, which plugs into the USB port on the back. If you don’t, you can still access the online features by connecting the Ethernet port to your router, but it’s nowhere near as convenient. It’s worth connecting somehow though, as there’s plenty of content to explore.

Panasonic’s entire 2012 Blu-ray range now features Viera Connect as opposed to Viera Cast, which is decidedly a good thing. You can now access BBC iPlayer and Netflix as well as the usual YouTube, Acetrax, Facebook and Twitter apps. The selection still isn’t as good as Sony or Samsung’s web portals, but the mere presence of iPlayer should be enough to attract your attention. And don’t forget that you also get Skype video calling into the bargain, which is a terrific feature, but could involve a bit of USB jiggery pokery if you want to use it wirelessly (the LAN adapter will need to be relocated to the front).

And while online, you can also use the Panasonic SC-BTT182 to stream your media from Windows 7 PCs and other networked devices – including Panasonic’s DIGA recorders – thanks to its DLNA certification. Supported formats include MP3, JPEG, DivX, MKV, FLAC, WAV and MPO, although the list widens when you use the network drive feature, which enables playback from non-DLNA drives. The above formats can also be played back from USB devices, while AVCHD, MP4, MPEG 2, JPEG and MPO can be played back from SD/SDHC/SDXC cards.

Smartphone owners can use their device as a Digital Media Controller, accessing content from a server using the SC-BTT182 as a renderer. And with Panasonic’s snazzy new remote app installed on your iPad or iPhone, you can use it to control the system instead of the supplied remote.

There’s tons more to talk about. The Blu-ray player supports 3D and converts 2D discs to 3D, plus there’s a wide range of picture adjustments including five presets and a User mode that allows you to set levels of contrast, brightness, sharpness, colour, gamma, 3D and integrated noise reduction. Chroma Process, Detail Clarity and Super Resolution further enhance the picture, plus there’s also a dedicated set of 3D picture adjustments that allow you to find the most comfortable image for your eyes.

The audio highlight is 2.1ch Cinema Surround Plus, which is claimed to add 20 virtual speakers to the real 2.1 channels in order to muster a more enveloping sound in the horizontal and vertical planes – tenuously described as a match for the 3D pictures on screen. An equaliser with four presets, subwoofer level adjustments, H.Bass and Whisper Mode Surround let you tweak the sound further.

Operation
Getting the system ready for action is a piece of cake. Pre-attached plugs on the end of the supplied cables match up to the terminals on the back of the main unit – connect the other ends to the speaker springclips and away you go. The Easy Setting feature runs through all the key options from boot up, and with a LAN adapter connected network setup is a cinch thanks to the helpful onscreen guides. Calibration is a matter of tweaking the left/right balance and the subwoofer volume (conducted using the front display panel, not onscreen). 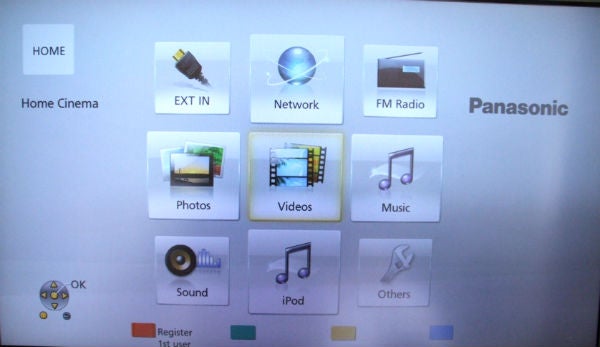 From then on, operating the system is consistently easy. The main menu lacks the one-touch navigation of Panasonic’s Blu-ray players due to the greater number of icons it needs to pack in – therefore you have to select the option you want and hit enter in the traditional way. This Home menu is gorgeous to look at with crisp HD graphics and friendly colours.

The Options menu is a very helpful tool, allowing you to make changes to pictures and sound while a disc is playing – avoiding the annoyance of losing your place in the film. Looking like the scaled-down setup menu, it’s broken down into Operation, Personal Taste, Picture and Sound menus, and the layout is easy to follow.

The remote is pretty much the same as last year’s. The clear layout and labelling of the large rubbery buttons makes is a godsend, plus it’s peppered with useful keys that take you straight to often-used features including Internet, Netflix and Skype. Three buttons at the bottom provide convenient audio adjustments, while the playback keys are helpfully highlighted in blue.

Performance
Like previous generations of its maker’s single-box systems, the Panasonic SC-BTT182 delivers a clean and enjoyable performance with Blu-ray soundtracks, without blowing your socks off like the best 2.1 systems do.

Take the Dolby True HD soundtrack of Super 8 for example. At the start of the train crash scene (chapter 3 if you want to check it yourself), the build-up is nicely handled – as the kids prepare to shoot their scene, dialogue is conveyed with pleasing clarity, the wind rumbles delicately in the background and the score hums away smoothly beneath it all. And as the train starts to approach, the menacing rumble is a precursor to the carnage that ensues.

Effects are crisp and clear, with the speakers teasing out most of the scene’s little details, and when the train collides with the van it makes a dramatic impact. Even though there’s no centre speaker, speech is generally audible with a nice tone, although it gets a little swamped during scenes with lots going on. If you’re making the step up from flat panel TV speakers then the SC-BTT182’s energetic, dynamic sound will certainly satisfy. 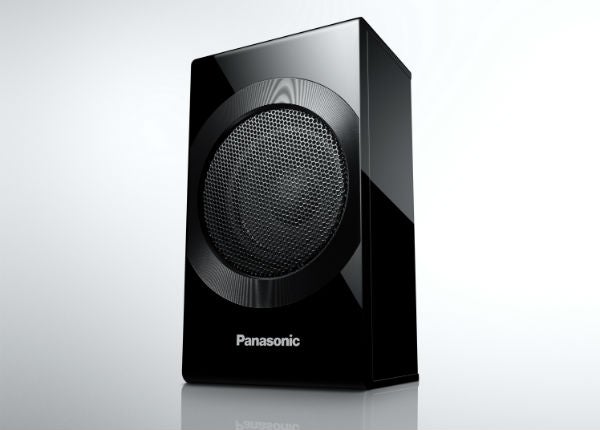 But with our more critical hat on, the explosion and the aggressive effects that follow cause the speakers’ single full range driver to strain under the pressure at loud volumes, making it a little too hard and sharp for comfort. The sound of the train smashing through the building and metal parts crashing into each other have a sharp, spitty edge that’s all too common among budget speaker systems.

And because the subwoofer is passive, it lacks the control and tightness of an active unit, which means its bass output is on the boomy side. It rumbles indiscriminately whenever it’s told to without any real agility or subtlety, but again that’s par for the course with budget passive subs.

Although it won’t make you start hearing sounds from above and behind, the 2.1ch Cinema Surround is more effective than expected. We could detect certain effects being projected wide of the listening position, giving the stereo soundstage a pleasing width and making everything sound fuller than the straight stereo mode.

Musically the Panasonic SC-BTT182 is a little lacklustre, lacking the crispness and refinement in the high-frequencies to make songs sparkle, and the unresponsive sub doesn’t help with timing and agility. But for day to day listening or a bit of background music at a dinner party it’s more than adequate.

One area where the SC-BTT182 isn’t found wanting is picture quality. Like its standalone players, the system serves up hi-def images so deep, lustrous and sharp that it’s almost impossible to look away – and that goes for 3D and 2D discs. It also loads up Super 8 in the blink of an eye – well, if you blink for 24 seconds.

Verdict
The Panasonic SC-BTT182 may not be the most sonically assured 2.1-channel system we’ve auditioned, straining slightly under duress from a boisterous action scene, but what it lacks in sound quality it makes up for in picture performance and features. Viera Connect is a much-needed upgrade and media streaming is useful, plus it supports a wide range of formats and iPod/iPhone support is always a bonus. It’s also a good looking system that will blend discreetly into your living room. That said, the need to add an optional dongle to access the good stuff wirelessly is a bit of a pain – if it’s greater convenience and connectivity you crave then it might be worth stepping up to the SC-BTT282.