The SC-BT230 is a scaled down version of the SC-BT330 system we reviewed back in May, and like its bigger brother the BT230 provides an ideal entree into the world of hi-def home cinema without the fuss and expense of separates. It’s also packed with little added extras that make it more of an all-round entertainment centre than a straight up Blu-ray system.

The word that best sums up this particular system is ‘compact’, which is clear just by looking at the tiny box it comes in. Inside you’ll find five of the dinkiest satellite speakers this side of Sony’s golf balls, as well as an equally diminutive subwoofer and a main control unit that packs a BD Live Blu-ray deck and a 1,000W amplifier.


This unit is classic Panasonic, halfway between fancy and functional with a modern black finish and the sort of slim dimensions that could fool you into thinking it was a standalone player. The front panel is split into two drop-down flaps – the left one conceals the disc tray, while the right one covers a few playback keys, an SD card slot, a USB port and an illuminated display panel that shines through the flap when closed. It’s very easy on the eye but won’t be giving Samsung’s design team any sleepless nights. 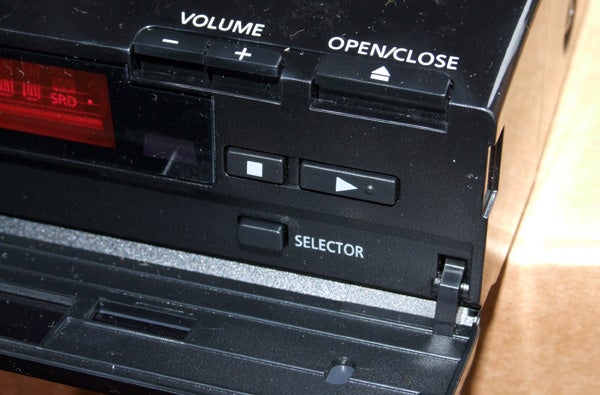 Whereas the SC-BT330 used a pair of (rather flimsy) tallboy speakers for the front pair, the SC-BT230 uses compact bookshelf satellites that stand just 118.5mm high – that’s why this system is about £50 cheaper. But the centre and surrounds are the same ones you get with the BT330. All of these speakers boast sturdy build quality and are attractively styled with gloss black top and bottom panels, plus each one sports springclip terminals on the back for the supplied speaker cables. 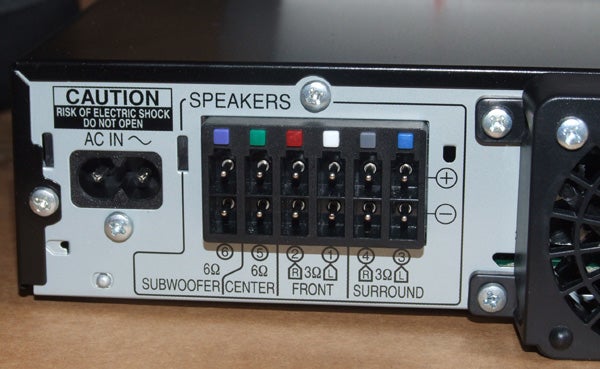 You get a different Kelton subwoofer than the one supplied with the BT330, and from the front it’s a stylish affair with its glossy port and greyish black finish. But the exposed MDF on the back ain’t so hot and its astonishingly small dimensions (145 x 289.5 x 258mm) make you wonder how on earth it can generate the bass muscle needed to do justice to explosive movie soundtracks. That said, its compact size will make placement a breeze.

For a system designed to be the centre of your home entertainment world, the main unit’s rear panel is surprisingly light on connections. Most disappointing is the lack of HDMI inputs, which not only would have made it easier to play sound from external sources, but would also have turned the unit into a glorified switchbox, taking up only one HDMI port on your TV. File under ‘missed opportunities’.


Still, at least there are two optical digital audio inputs and analogue phonos to take advantage of, as well as HDMI and composite video outputs, an Ethernet port for wired connection to the Web and a second USB port.

The second USB port (at the rear) is provided for the optional DY-WL10 wireless LAN adapter, which will set you back about £80. Invest in one, and you’ll be able to download BD Live content and explore the system’s networking features without a wire in sight. These include Viera Cast – a range of online apps such as YouTube, Picasa and Bloomberg – and MP3, DivX and JPEG streaming from DLNA-certified devices. You can even stream recordings from networked Panasonic recorders elsewhere in the house. 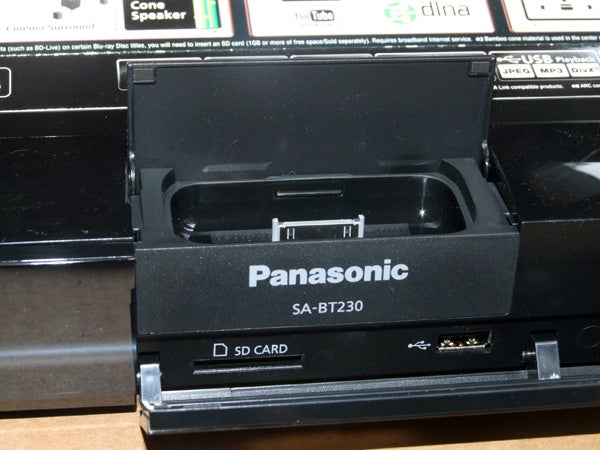 Although the inclusion of Viera Cast is always welcome, its limited content could be an issue for true entertainment junkies. It simply pales in comparison to the abundance of quality content on Sony’s BRAVIA Internet Video or Samsung’s Internet@TV, and the lack of BBC iPlayer will be a turn-off for many.


The multimedia support doesn’t stop there. You can also play DivX HD, MP3 and JPEG files from USB as well as AVCHD, JPEG and MPEG-2 (SD Video) from SD, SDHC and SDXC cards. Additionally, an integrated iPod/iPhone dock situated just above the front panel gives you another audio source to play with, and the beauty is that you can control it using the system’s remote. 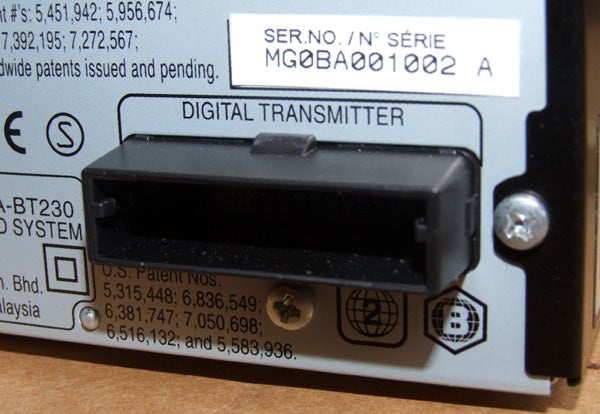 Elsewhere, there’s plenty more to discover. If you’re feeling flush you can purchase the SH-FX71 wireless kit for the rear speakers and take a few cables out of the equation, but this will make your wallet another £100 lighter.


A new feature on this year’s systems is the Audio Return Channel, which allows the system to receive sound from your TV via HDMI without having to rig up a separate cable, but it requires an ARC-compatible TV. This suggests the HDMI chipset is v1.4 but there’s no mention of any future 3D compatibility. The system also decodes the full gamut of HD audio formats, while a range of DSP modes (such as H.Bass, Centre Focus and four EQ presets) allows you to spice up the sound further. 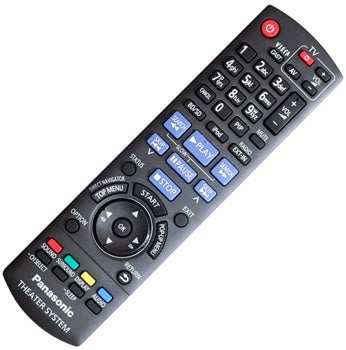 Unsurprisingly this system is extremely easy to set up thanks to the sensibly colour-coded cables and the Easy Setup onscreen wizard – we had it rigged up in under 10 minutes. There is, however, no auto calibration, so sonic fine-tuning is down to you and your ears. Each channel is individually adjustable and built-in test tones help to judge the settings.


Everything else, including the potentially tricky network setup, is straightforward, with the friendly, logical onscreen menus making everything easy to find and explaining things that you may not understand straight away. You also get one of Panasonic’s typically no-nonsense remotes, with large buttons, intuitive layout and excellent labelling.

The system boots up very quickly but sadly it takes us back to the disc loading dark ages with ”Terminator Salvation” in the tray – its time of one minute 25 seconds feels particularly sluggish when some other systems clock in at around 35 seconds.


Still, at least its picture quality gives us something to cheer about. The job of any Blu-ray player is to transport those pixels to a TV without any degradation or glitches and it does a fine job. The system features P4HD, PHL Reference Chroma Processor Plus and the High Precision 4:4:4 colour processing to add extra sparkle to its sharp, gleaming 1080p pictures, and with ”Batman Begins” in the tray the images are stunning.


Gotham’s murky alleyways and interiors are rendered with absorbing depth and punchiness, not to mention excellent shadow detail – all of which makes the picture look effortlessly cinematic. The system backs this up with a natural colour palette, sharply defined edges, fluid motion and a complete absence of noise.

Sound quality isn’t up to the same standard though. Sure, the bamboo cones inside the satellites produce a crisp, dynamic sound and the rears offers a decent sense of surround envelopment, but collectively the system doesn’t achieve the necessary sense of scale, which makes the movie’s set pieces sound underwhelming.


Much of the blame for this can be laid at the feet of the sub, which as expected is too quiet and reserved – we had to activate H.Bass and crank up the subwoofer to its highest level before it even began to make an impact. Without a decent bass foundation pulling it all together, the overall sound is thinner than we’d hoped, struggling to achieve any sort of cohesion and solidarity.


The punches and kicks during the fight scene between Batman and Ducard’s goons in chapter 35 don’t land with the necessary weight and impact. Similarly the roar of the Batmobile’s engine sounds thin, explosions are flat and loud crashes sound shrill.


Still, it’s not all bad – dialogue is clear and open, the clarity of which improves greatly with Centre Focus activated. And despite its flaws elsewhere, the BT230 makes a passable CD player, lending a pleasing fluidity and drive to different types of music. DivX, MP3 and JPEGs are all tackled without any problems too, whether they’re played from USB or streamed from a PC.


Although we’re impressed by the SC-BT230’s range of features, sizzling picture quality and ease of use, its sound quality is sorely disappointing. Normally we’d cut this system some slack based on its bargain price, but Sony’s BDV-E370 manages to deliver better audio quality for a similar amount of money, as well as throwing a wider range of online content, 3D compatibility, auto calibration and faster disc loading into the bargain.