If you need a Blu-ray player and you’re fed up with the flat, weedy sound coming out of your TV then the SC-BT222 could be just the upgrade you’re looking for. It’s a budget 2.1-channel Blu-ray system that delivers 500W of audio power from two compact front speakers and a subwoofer – all of which takes up considerably less room than a full 5.1-channel system.

Running the show is a combined Blu-ray player/receiver unit, which handles all the audio amplification, processing and video playback. It’s a slim and sturdy deck, measuring 430(w) x 54(h) x 287(d)mm, and is styled in a tasteful glossy black finish. The front panel is peppered with interesting bits and pieces – most eye-catching is the iPod/iPhone dock, concealed under a flap on top. That’s a real bonus for those who want to play music on their Apple device out loud, and there are onscreen displays for added convenience.

The right hand side of the fascia drops down to reveal a couple more buttons (play and stop) plus an SD card slot and USB port, making it easy to play your digital media. On the back of the unit is a limited selection of connections, including an HDMI output and a pair of optical digital audio inputs, which lets you enjoy sound from digital TV receivers and games consoles through the system. The lack of HDMI inputs is disappointing but no great surprise at this price. The line-up is completed by analogue stereo input, composite video output and an antenna input for the built-in FM radio. 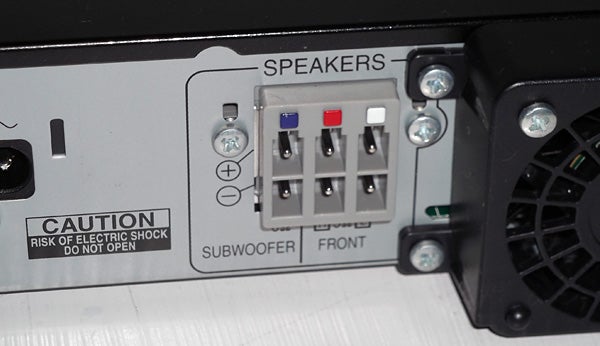 The speaker terminals on the main unit are colour-coded plugs as opposed to fiddly springclips, which makes connection a quick and easy process, although you’ll find springclips on the back of the speakers. The speakers’ sealed enclosures are surprisingly well built for such a modestly priced system, and although their black styling and plain rectangular shape lack pizzazz they’re pleasant enough – plus the little stands at the bottom are an attractive touch.


The subwoofer is a passive unit, which means it lacks its own power source and connects to the main unit with regular speaker cable like the front pair. It’s a remarkably compact box (145(w) x 289.5(h) x 258(d)mm) that should be easy to slot into a tight space. It’s ported at the front and features a 16cm cone, while the speakers use a lighter and more rigid bamboo cones than previous systems, which Panasonic says is more responsive and therefore helps improve the clarity of dialogue.

The SC-BT222 lacks most of the headline features of Panasonic’s pricier systems. It’s worth stating up front that the SC-BT222 is a Profile 1.1 machine, which means you can’t access BD Live content on compatible discs – only BonusView. The lack of Ethernet port also means that there’s no Viera Cast or DLNA networking.


The system will play DivX HD, MP3 and JPEG, which is useful but a fairly poor showing compared with systems from the likes of Samsung and LG, which seem to play every format under the sun. Some may find consolation in the AVCHD, SD Video and JPEG playback from SD, SDHC and SDXC cards.


The system doesn’t do 3D but does support the Audio Return Channel feature, which allows you to transfer sound signals from a compatible TV into the system via HDMI, without having to hook up a separate audio cable. 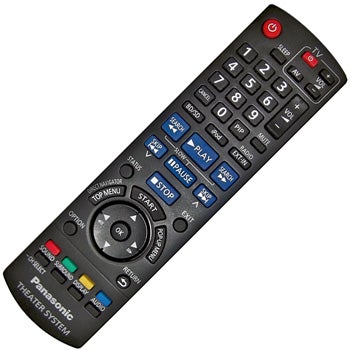 The system decodes multichannel Dolby TrueHD and DTS HD Master Audio soundtracks, but to account for the lack of rear speakers, Panasonic has included a 7.1-channel Virtual Surround mode, which optimistically hopes to replicate a 7.1 system through its two speakers. It’s joined by a selection of EQ modes (Flat, Heavy, Clear, Soft), the H.Bass bottom-end booster and Whisper Mode Surround, which enhances surround effects at low volumes.


There are some other useful features in the ‘Display’ banner, which pops up at the top of the screen during playback. There’s a selection of picture presets – Soft, Fine, Cinema, Normal – and a three-stage detail booster. Further audio settings include Re-master (for boosting high-frequencies) and a Dialog Enhancer. Elsewhere the individual speaker levels can be adjusted using the front panel display, plus there are four subwoofer level settings.


The SC-BT222 uses the same onscreen menus found on Panasonic’s other current systems, which is a blessing. The ‘Start’ menu uses a bright, vibrant colour scheme and clear, legible text, and elsewhere everything is clear and user-friendly, particularly the setup menu. The remote is one of Panasonic’s usual chunky-buttoned affairs, using colours to separate the keys into different sections while clear labelling keeps confusion at bay.

Nobody buys a £240 system like this expecting to get the ultimate in home cinema performance, but as long as it delivers clean, exciting sonics that put your TV to shame then you’re onto a winner. On that score the SC-BT222 delivers.


When playing ”Avatar” on Blu-ray, pivotal scenes like the Battle for Pandora and Assault on Home Tree sound lively and engaging thanks to the robust midrange and crisp high-frequency reproduction. Helicopter blades chop the air with fast, forthright beats, while rattling gunfire is relayed with a respectable amount of potency. These scenes don’t sparkle as they would through a more expensive set of speakers, plus the hissing and shrieking of the banshees is a little too sharp on the ears, but as entry-level 2.1 systems go this is an above-average performance.


It also copes quite well at loud volumes and dialogue is remarkably clear, despite the lack of a dedicated centre speaker. During quieter scenes, like Jake’s first sortie through the jungle, little scraps of detail flutter from the speakers – the rustle of leaves and distant animal cries and two good examples.

7.1-channel Virtual Surround is a bit hit and miss. You can certainly sense a little extra width and spaciousness across the front soundstage, but surround effects aren’t distributed with enough distance to convince, plus it flattens the dynamism of the sound compared with two-channel stereo mode.


And as is so often the case with all-in-one systems, disappointing bass reproduction is the main tell-tale sign of the system’s budget price tag. It’s not a disaster, but the boomy, undisciplined way it handles explosions undermines their impact. Keeping the subwoofer level setting at 1 is the best way to tame it, but that makes it much harder to hear ambient bass during quieter scenes.


As for Blu-ray pictures, there are no problems whatsoever – Panasonic’s P4HD and PHL Reference Chroma Processor Plus with 4:4:4 upsampling keep those pixels looking pristine. The pictures are so sharp they’ll have your eye out, while colours look vibrant without seeming garish – quite a feat when tackling ”Avatar’s” kaleidoscopic palette. Shadow detailing, black level and noise reduction are all first-rate.


There’s much to like about the SC-BT222, such as its excellent pictures, enjoyable sound and generous multimedia support in the form of a USB port, SD card slot and iPod dock – hugely convenient features that aren’t to be sniffed on an entry-level system.


But while its price tag gives the impression of good value, it’s not quite the outstanding bargain we expected, due to the amount of missing features – namely BD Live support, media streaming and Viera Cast. Shop around online and for a similar price you can get the Sony BDV-E370, a 5.1-channel system with all the features above plus 3D and Wi-Fi dongle support, or Panasonic’s 5.1-channel SC-BT230. Both are different propositions entirely, but illustrate the fact that the SC-BT222 is a little overpriced for what it is.