Panasonic was one of the first companies to launch an all-in-one Blu-ray home cinema system in the UK with last year’s SC-BT100, a typically feature-rich 3.1-channel bundle with powerful but flawed sound quality and awesome hi-def pictures.


The company has followed it up this year with the SC-BT205, a full 5.1 system equipped with all the tasty features found on Panasonic’s latest standalone players, the DMP-BD60 and BD80. It’s one of three new Blu-ray systems in the current range – the others are the SC-BT200, which features bookshelf-style speakers, and the SC-BTX70, a style-led 2.1-channel system with a new vertical-standing main unit. 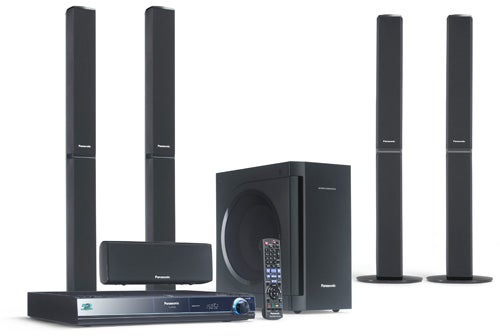 The SC-BT205 uses a set-top style control unit, which combines a Blu-ray/DVD/CD player with a 1,000W (RMS)/470W (DIN) multichannel digital amplifier, and it doesn’t strive for wafer-thin sexiness – it’s portly and proud. The unit is fitted with Panasonic’s customary mirrored fascia, a bit of glitzy eye-candy that makes up for the flimsy plastic flap below, which covers a set of inputs and a few buttons. The display panel is a good size and the ring of green light surrounding the volume dial makes it unmissable in the dark.


These front-mounted sockets include an SD card slot, a USB port, an input for the supplied setup microphone and a headphones jack, and you’ll also find a source select button and a pair of buttons for radio tuning and chapter skipping. But the most compelling feature on the front is a hidden iPod dock, which can be pulled out when required. With an iPod attached, you can browse lists onscreen as well as view videos and photos. 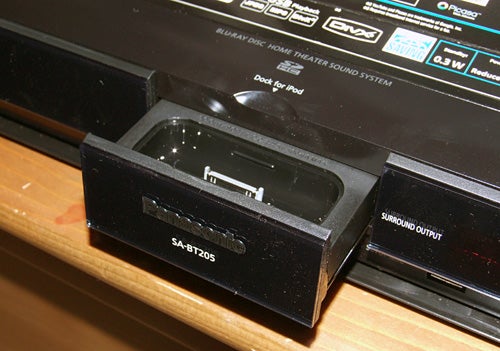 On the back the socket selection is solid enough, but we’re disappointed by the lack of HDMI inputs, which would have allowed you to switch between other HDMI sources (like Sky+ HD or the PS3) with only a single cable connected to your TV.


Instead, external sources have to be connected to the two optical digital inputs or analogue cinch connections if you want to take advantage of the system’s audio decoding. The HDMI 1.3 output sends 1080/24p pictures to a TV as well as HD audio bitstreams, should you ever want to upgrade to a separate AV receiver. An Ethernet port, component/composite video outputs and an FM antenna input are also provided. There’s also a terminal for adding the optional SH-FX70 transmitter and receiver kit for a wireless rear-channel connection.

For the front and surround speakers, Panasonic has opted for slim tallboy columns that boast 65mm cones made from rigid, low-density bamboo, which (according to Panasonic) has a few sonic advantages over regular cones. Each speaker comes in three parts and when assembled stands just over a metre high. Build quality is underwhelming – the speakers feel hollow and unsubstantial plus the springclip terminals on the back are fiddly, but from a distance they look attractive enough.


Oddly the compact, horizontal centre speaker doesn’t share this lightweight build quality. It’s heavy, solidly bolted together and also uses bamboo cones, which is particularly good at reproducing dialogue, apparently. The passive Kelton subwoofer is pleasingly compact and internally it’s divided into two completely sealed spaces, with a drive unit mounted in the back space that causes the air in the front space to vibrate. This causes an ‘Acoustic Filter’ effect, which absorbs unwanted noise while vibrating the 250mm passive radiators.

So on to features and the SC-BT205 is positively bursting with them. The integrated Blu-ray player is Profile 2.0 compliant, which means you can hook up to the web and download bonus movie-related content – provided you have at least 1GB of memory loaded into the SD card on the front. The deck also features Viera Cast, which provides access to YouTube and Google Picasa, plus other forthcoming services like Bloomberg, The Weather Channel and Eurosport.


You’d feel pretty short-changed these days if you bought a home cinema system that didn’t play all the main digital media formats, and while the BT205 won’t let you down, it’s not as obliging as it could be. It accepts DivX (including VOD files), JPEG and MP3 from DVD, CD and USB, but ask it to play WMA, WMV or DivX HD you’d have more luck getting John Prescott to leave an all-you-can-eat buffet.


You can play AVCHD, SD video and JPEG from SD cards, and disc support is sound – it spins every type of recordable DVD, CD and Blu-ray disc. 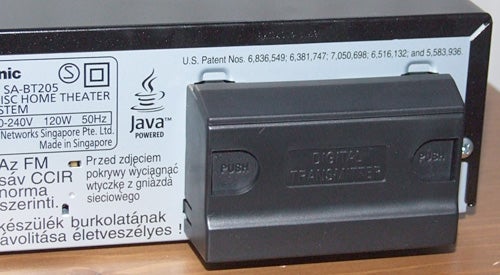 The system decodes Dolby TrueHD, DTS HD Master Audio, Dolby Digital Plus and DTS HD, plus regular Dolby Digital and DTS. Like any system worth its salt, there’s a wide range of sound settings, including Dolby Pro Logic II Movie and Music, S. Surround (which plays stereo sources through all speakers) or you can leave it up to the system to decide according to the type of material. There’s also a range of EQ settings (Flat, Heavy, Clear, Soft), Centre Focus, which re-directs dialogue to make it appear to emanate from the TV, and Whisper-mode Surround for late-night listening.


Setup is easy. The clear colour-coded terminals on the back of the main unit let you know exactly where to stick all the speaker cables, and you don’t have to spend hours tweaking all the levels and distances yourself – the Smart Setup mode (which runs when you first boot up the system) sets them automatically by running though a series of test tones, which are picked up by the microphone. The process takes no more than 30 seconds.


The initial start-up sequence also runs through language, aspect ratio and the speaker position options – by the time you get to the main menu, you’re all set.

Using the system is simple thanks to the straightforward onscreen menus, which use a similar design to the BD60 and BD80 players with a few tweaks. You even get the same playback information window found on the BD80. Everything is bright, colourful and pared down to the basics so that Blu-ray newbies can find their feet quickly. The remote benefits from Panasonic’s typically clever button layout, and as a result requires no brain power to use.


Pulling the strings at the heart of the Blu-ray player is the UniPhier chip and all its associated wizardry – P4HD and PHL Reference Chroma Plus – and yet again it does a superb job. Its handling of ”The Dark Knight” is simply spellbinding, with the player’s processing teasing out the most miniscule of picture detail such as pockmarks on skin, strands of hair and the fibres on The Scarecrow’s sack mask. 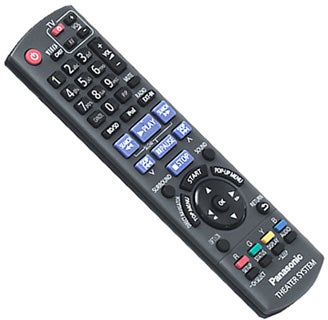 But almost as impressive is the depth and richness of the picture, which gives the movie’s gloomy visuals the cinematic gravitas they deserve, while the perfectly judged colour balance never lets skin tones look anything other than smooth and natural. The system also walks the Silicon Optix HQV tests – diagonal lines are smooth and free from jaggies, the pan across the stadium on the Film Resolution Loss test is composed and flicker-free, while noise reduction is second to none.


As for sound, this is one of the best performances we’ve heard from a Panasonic one-box system. It’s able to muster the required grunt for raucous action scenes and shows impressive agility from the front and surround speakers, which results in a fast, exciting listen. 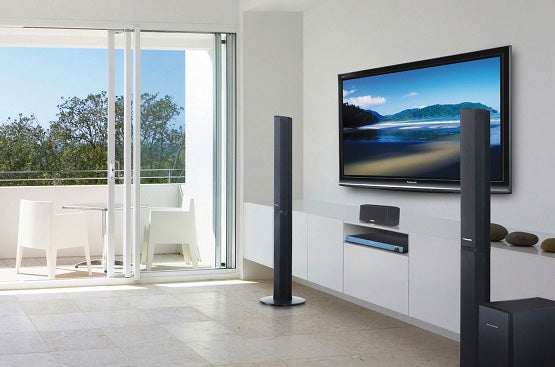 High frequencies in ”The Dark Knight’s” Dolby TrueHD track are clean and crisp, and unlike many all-in-ones it manages to avoid making loud bangs and crashes during the car chase scene sound harsh or uncomfortable. Dialogue is competently handled too, giving Batman’s growly tones the requisite clarity.


Despite its modest appearance, that sub delivers chunky, fulsome bass – in fact, you’ll need to dial it down from the default settings to give the other speakers a chance to be heard such is its overbearing presence. It’s a tad flabby at times, and could do with a bit more punch and speed for sudden thumps, but on the whole it does a decent job.


The SC-BT205 is a vast improvement on the SC-BT100. Sound quality is excellent by one-box standards and pictures are blessed with the same ultra-sharp quality that makes Panasonic’s standalone players so special. When you take this fine performance and extensive feature list into account (which includes an iPod dock and Viera Cast) then that price tag seems fairly reasonable – although at this price we would have expected better build quality and support for DivX HD and WMA.