What is the Panasonic SC-ALL05?

Imagine lounging in a bubble bath surrounded by candles, glass of wine in hand, while Kenny G’s seductive smooth jazz drifts across the bathroom. Or standing in the shower, soaping yourself to the strains of Iron Maiden’s “Bring Your Daughter to the Slaughter”.

That’s the dream Panasonic is selling you (probably) with the SC-ALL05, a portable waterproof speaker that brings your favourite tunes to any room in the house – including those in which the combination of water and electricity would normally pose a threat to your own personal safety.

Equipped with Wi-Fi, Bluetooth and Qualcomm AllPlay multiroom functionality, the SC-ALL05 forms part of Panasonic’s ALL Connected Audio range, following in the footsteps of the SC-ALL6 and SC-ALL7CD. 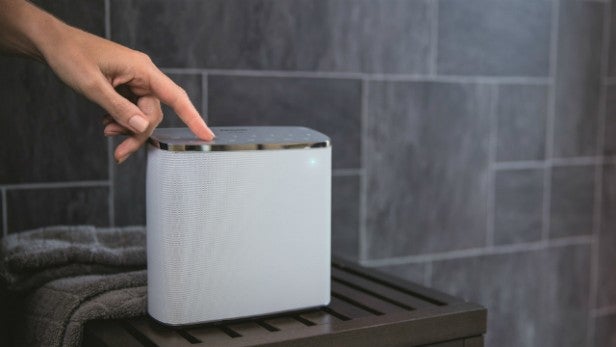 Eye-catching, elegant and compact, the SC-ALL05 is a design triumph. Its small footprint (170mm wide by 77mm deep) is perfect for perching on a bathroom or kitchen shelf, while the simple black and white styling looks great.

My eye is immediately drawn to the slanted top panel, with shiny chrome trim. It’s a real fingerprint magnet but looks nice. It contains a row of backlit touch-sensitive playback and volume controls, plus six numbered presets that provide quick access to AllPlay Radio stations. The Voice button gives speech frequencies a boost in noisy rooms.

The rest of the speaker is covered in a fine grille with two LEDs at the top that indicate operation and network status. On the back is a lockable cover that keeps the sockets dry when used in wet areas – open it up and you’ll find an Ethernet port, reset button and the DC power terminal.

The SC-ALL05’s headline feature is its waterproof design. It’s IPX5 and IPX7 certified, which means it will withstand jets of water or being accidentally knocked into the tub. It can be immersed in 1m of water for up to 30 minutes, but I wouldn’t recommend it. A couple of drain holes let you empty any water that accumulates.

As part of Panasonic’s ALL Connected Audio range, it can stream music from PCs and NAS drives via the Music Streaming smartphone app. You can also play music from Spotify and Napster, although neither is native – it diverts you to the respective apps, and you’ll need a premium account for Spotify.

Internet radio comes courtesy of Aupeo and AllPlay Radio. The latter also requires a separate app, which lets you assign stations to the preset buttons. Moving from app to app for different services is a chore – it would be nice if they were integrated into a single interface.

The SC-ALL05 uses Qualcomm’s AllPlay multiroom platform, which is remarkably flexible and easy to use. You can carry out all the usual multiroom tricks – grouping speakers together in different zones, or playing different sources on each speaker – but the pièce de résistance is the ability to “re-stream” Bluetooth from the SC-ALL05 to other ALL speakers. 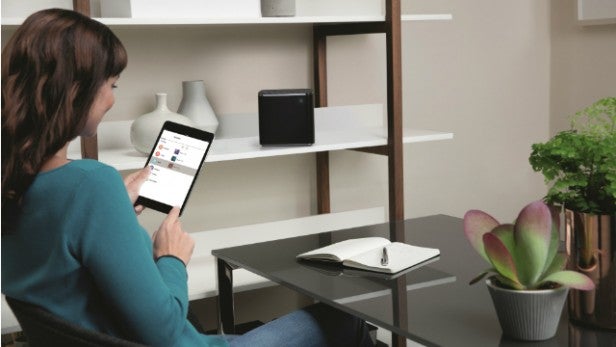 In terms of spec, the stereo SC-ALL05 packs a pair of 6.5cm full-range cone drivers, backed by a pair of 6.5cm passive radiators to flesh out bass notes. Total power output is quoted at 20W on mains power, which drops to 8W when running off the battery. You can hear the drop in loudness when you pull out the AC adapter.

Battery life is given as 9 hours of Bluetooth playback, or 8.5 hours in network mode. When using the AllPlay system, you can play MP3, AAC, FLAC, ALAC and WAV, the latter three up to 192kHz/24-bit. 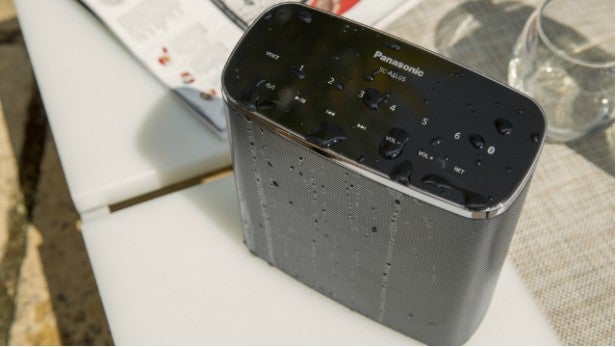 Wi-Fi setup is quick and easy – just open the Music Streaming app and follow the onscreen instructions. After it finds the ALL05, just key in your Wi-Fi password and you’re good to go.

The lack of a dedicated remote means operation is restricted to your smartphone or tablet. That’s a little annoying if your phone dies – but thankfully, there’s a decent range of controls on the unit itself.

As established in our previous ALL speaker reviews, the Music Streaming app is one of the best around. The friendly colour scheme and clear layout make navigation intuitive, and it scrolls through large NAS drive libraries without buffering. A search tool is on hand to help find a particular track or album.

To start playing music, your first port of call is the Browse menu, which lists servers, streaming services and radio apps. During playback you can switch between the Browse and Queue menus, the latter allowing you to change the playback order by dragging and dropping tracks. Tap the album art at the top and it expands to a full-screen Now Playing menu, with playback controls, volume and track sliders.

Multiroom control is carried out in a sidebar menu, where each speaker is denoted by a differently coloured icon. You can rename and group them together by dragging and dropping the icons onto each other – the icons link up and the current playback source is displayed between them. 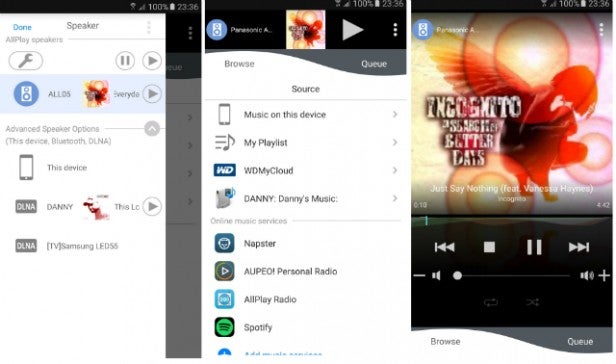 The SC-ALL05 musters a solid, cohesive sound with punchy bass and decent clarity. Despite its modest power rating and compact size, it goes nice and loud, which is a godsend when you’re clanking around in the kitchen.

It also produces a surprising amount of bass for such a small unit. It’s warm and full-bodied, lending depth to anything you play. The funky bass groove in “Just Say Nothing” by Incognito is handled with impressive agility; notes stop and start accurately. It can become a little boomy as you nudge the volume higher, but in general everything hangs together nicely.

Meanwhile, the track’s snare drums have a lively snap and the cymbals are suitably crisp. This terrific sense of clarity extends to instruments and vocals too, which stay clear and focused. Panasonic has clearly designed this speaker to make itself heard in lively environments with its forceful, biting tone.

Voice mode takes this idea even further, stripping away most of the bass and enhancing the mids in order to make speech more audible when you’re in the shower. Normally I’d run a mile from features such as this, but it works wonders, making the news headlines audible over the hiss.

This is ideal when going about your day-to-day business, but cracks appear when you sit down and listen critically. The mids and high frequencies are rather thin and forced, lacking the refinement and smoothness you get from other wireless speakers at this price.

A touch of hardness also creeps in as you approach the top end of the volume range (although it keeps its composure for longer than I expected) and the soundstage is fairly narrow given the unit’s obvious physical restrictions.

So it’s no substitute for your living room hi-fi system then, but it isn’t designed to be. As a portable speaker that you can play anywhere in the house – including the bathroom or garden – it does a terrific job. And when you throw in flexible multiroom functionality, compact design and long battery life, the SC-ALL05 looks like it could really make a splash (sorry). 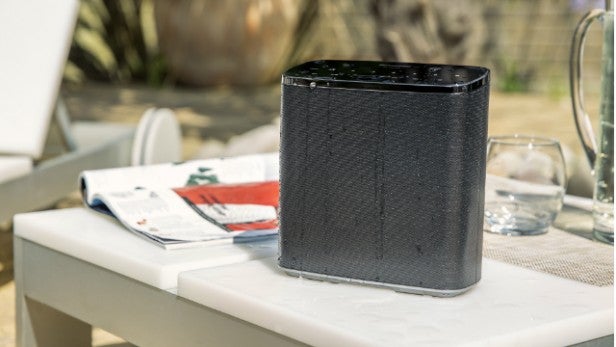 Should I buy the Panasonic SC-ALL05?

If you’ve already bought into Panasonic’s ALL multiroom system, adding the SC-ALL05 is a no-brainer. Its IPX5/7 waterproofing lets you expand your ecosystem into the bathroom or garden, without the threat of water curtailing your musical enjoyment.

Its clear, punchy and vigorous sound is ideal for day-to-day listening, while the handy Voice mode makes speech audible over the hiss of the shower. Granted, its thin, hurried high frequencies and slightly boomy bass won’t make audiophiles go weak at the knees, but on the whole it does a fine job.

If you’re buying the SC-ALL05 as a standalone speaker, you won’t be disappointed either. Qualcomm’s slick, reliable AllPlay platform makes music streaming a cinch, while decent battery life, appealing features and a compact design further bolster the Panasonic’s buyability.

The SC-ALL05’s sound quality won’t set the world alight, but with its long battery life, compact design, slick operation and nifty features, this portable waterproof speaker is sure to make a splash.