The SA-BX500 was launched alongside the DMP-BD50 BD-Live Blu-ray player, and with a comprehensive range of cutting-edge features on board it’s the perfect partner for Panasonic’s flagship hi-def deck – or any Blu-ray player, for that matter.


The receiver’s spec sheet reads like a home cinema fan’s wish list, but of greatest interest to Blu-ray buffs is its ability to decode all of the HD audio formats – Dolby True HD, DTS HD Master Audio, Dolby Digital Plus, DTS HD and multichannel linear PCM – at a much lower price than you might have expected (compared with the sky-high prices of the BD50 and SC-BT100 anyway).

Crucial to its HD audio capabilities is the inclusion of HDMI v1.3 inputs (three to be precise, alongside one output), which make bitstream transfer of these formats possible. It also means that you can use the receiver as a full 1080p video switcher for your hi-def kit, and all of the sockets support Deep Colour, x.v.Colour, Lip Sync and Viera Link technology.


Another reason that the SA-BX100 is perfect for Blu-ray is that it offers 7.1 decoding with 130W per channel and the ability to transmit the surround and surround back channels wirelessly. To do this, you need to buy the SH-FX67 wireless speaker kit, or two sets if you want to achieve 7.1-channel sound with all-wireless rears. Alternatively, you can use the wireless speakers for multi-room listening.


As for design, the unit is dressed in black from top to toe and is remarkably chunky but surprisingly light – a result of the digital amplifiers used inside. On the front are two huge dials for volume and input selection and a row of buttons that let you control most of the functions without need for the remote. The central display panel is large and conveys the relevant details clearly, plus a row of lights to the left indicates which format is currently being decoded.

Among its other features is a virtual 7.1-channel mode for 5.1 speaker setups and a raft of Sound Field Control DSP modes, plus Dolby Digital, DTS, Pro Logic IIx and DTS Neo:6 decoding. It even supports Dolby Digital Surround EX, DTS-ES and DTS 96/24, which is phenomenal format support by anyone’s standards. The only thing missing is a 5-channel stereo mode for making two-channel music fill all the speakers.


It’s fairly easy to install, helped by the fact that you don’t break your back lifting it out of the box. The speaker cables clamp into binding posts on the back, and if desired the front speakers can be bi-wired, using separate amps for the high and low frequencies.


There’s also a superb selection of sockets to house your audio and video equipment – three sets of component video inputs and one output, five S-video/composite inputs and two outputs, four digital audio inputs (three optical, one coaxial), more analogue stereo ins and outs than you’ll ever need, and a set of 7.1-channel analogue inputs for Blu-ray or DVD-Audio/SACD players. You’ll also find a slot for the wireless transmitter and a port for the optional SH-PD10 iPod dock.

Once you’ve got yourself connected, the built-in auto speaker setup mode can be used to configure the sound quality for your room. There’s a microphone that plugs into the front panel and takes readings from the test tones, setting the correct distance, size, level and frequencies of each speaker and adjusting their polarity if need be.


Making changes in the setup menu using the front panel is easy enough and the remote is up to Panasonic’s usual high standards – it’s intuitive, user-friendly and packs lots of different functions into a small space but gives the buttons enough variety to keep confusion at bay. 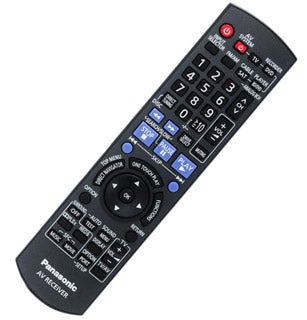 It’s a real novelty to play with a receiver that will decode anything you throw at it, but even more exciting is the SA-BX500’s top-drawer sound quality. The disappointing sonics offered up by the SC-BT100 system meant that we fed the ”Spider-Man 3” Blu-ray disc into our player with a touch of trepidation, but our fears were allayed by the Panasonic’s commanding performance with the Dolby True HD soundtrack. Big, grandstanding scenes like the movie’s climatic four-way smackdown are reproduced with plenty of force and energy, fizzing around the room at breakneck pace but remaining well separated and adeptly controlled.


Whereas previous Panasonic digital amps have been accused of being tonally harsh, this one offers a slicker, smoother listen, stripped of the abrasive edge that marred the SC-BT100’s performance. But it’s not too laid back to get the pulse racing – when needed there’s more than enough aggression to deliver sharp transients like gunfire and loud bangs with neck-snapping ferocity.

Furthermore, the sparkling high frequency presentation gives delicate effects and other sonic subtleties the requisite sharpness, while the surround ambience is intoxicating. In addition, dialogue is forthright and natural, and the sub dishes up bass that can only be described as ‘kick-ass’. You could probably find amps from the likes of Pioneer and Denon that do it better but it’s impressive nonetheless.


Switching to ”Apocalypto’s” DTS soundtrack, we’re treated to more of the same, with the unit offering a thrilling rendition of those frenetic chase scenes. But when pushed too hard some cracks start to appear – the cheering crowds at the Mayan city become a little overbearing at high volumes – but overall there are more pros than cons.


Musically the Panasonic lacks warmth but does a solid enough job with Corinne Bailey Rae’s version of ”Since I’ve Been Loving You”, lending her voice a silky tone and replaying the double bass and piano with pleasing body and detail.


From a features perspective, the Panasonic SA-BX500’s credentials are unquestionable – a wireless-capable receiver that decodes all of the Blu-ray formats for under £400 is a real boon, and overall sound performance is impressive. It might not have enough refinement or musical prowess to send Denon or Onkyo scuttling into the shadows but it’s a definite improvement on what we heard from the SC-BT100 Blu-ray system.