The Panasonic RZ-S500W are a capable set of ANC true-wireless in-ears that will be an ideal fit for home workers and commuters looking to drown out the outside world. But there are slightly better soundings sets at this price.

The RZ-S500W are Panasonic’s premium earbud in its true-wireless line-up, sitting above the more affordable RZ-S300W.

The RZ-S500W target the same competitive market as the Sony WF-1000XM3 and Apple AirPods Pro and aim to wow listeners with cutting edge ANC tech and nifty smart features.

As earbuds go, they’re a cut above many rivals like the Samsung Galaxy Buds Plus, offering excellent noise cancelling, clear call quality, stable connectivity and reliable battery life. But the lack of aptX support coupled with a slightly flabby low end stops them completely dethroning the best true wireless earbuds when it comes to audio quality.

The Panasonic RZ-S500W have a fairly functional design, featuring a black plastic charge case that looks identical to the S300W’s  from the outside. It’s a basic black case with curved edges and a USB-C charge port around the back. Open it up and you’ll also see the same three lights, which tell you how much charge is left in the case.

There are also only minor design changes to the spherical buds, which feature metallic finish flourishes and single LED status lights on their top.

The design lacks the premium finish of the more expensive Technics, but I personally like the fact they’re fairly unassuming. The only downside is that their tip options don’t include any form of clip or wing attachments. This is a bit of a pain as the buds are noticeably chunky, making them a poor option for avid runners and gym goers, despite their IPX4 water resistance rating and otherwise solid build quality.

From a functional perspective they are otherwise excellent. During testing I found the buds matched Panasonic’s quoted 6.5 hours listening time with the volume set to around 75% and ANC. The case provided another two and a half charges, which is good for a set of ANC true wireless. 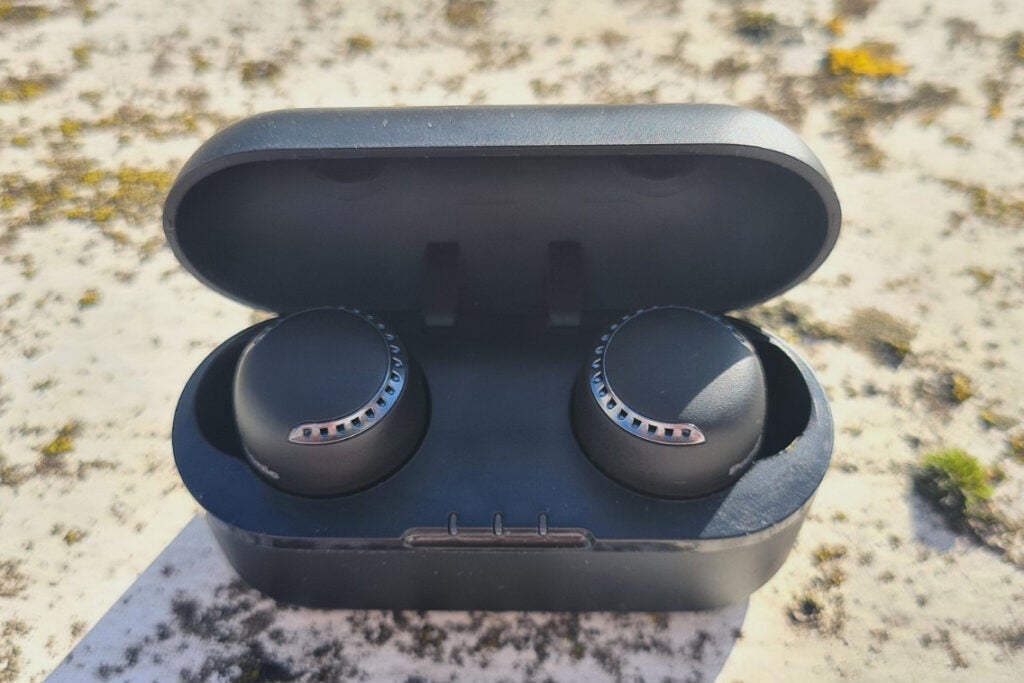 The control system also works very well despite being capacitive. There are some earbuds where capacitive controls can be too finicky to comfortably use, but to date I’m yet to have any issues with the Panasonic RZ-S500W.

Play/pause controls work reliably even in drizzly conditions, or mid-run with sweaty fingers. Switching between ANC and ambient modes also works a treat, making them great for home and travel.

The earbud’s Mono mode also works reliably. The Panasonic RZ-S500W supports mono connectivity for both the left and right bud, and features intelligent sensors that let them switch between them on the fly when you take either out of your ear. The feature is noticeably faster to activate than competing sets this price.

The Panasonic RZ-S500W delivers in one key metric: active noise cancellation. The buds use Panasonic’s dual hybrid ANC tech to intelligently adjust noise cancelling between 50 levels to block out external sounds. They aren’t the only buds to do this, but to date they are one of a select few in ear sets I’ve tested to actually deliver effective ANC at this price. 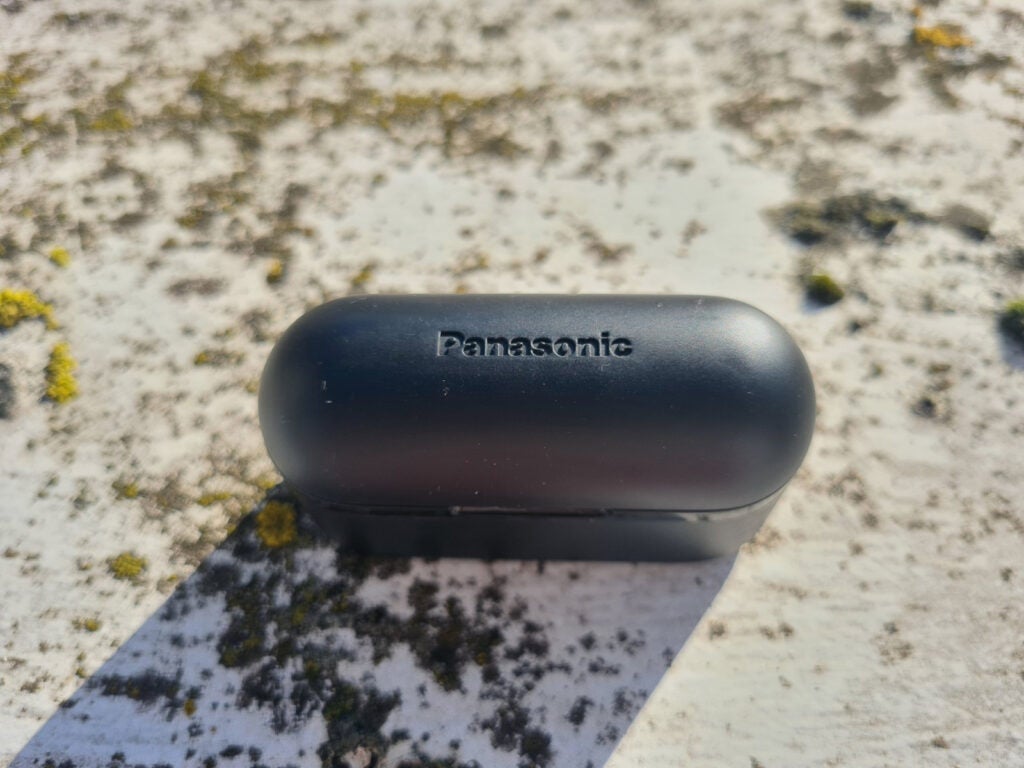 The buds manage drown out the background noise of a busy road while I was running, and are more than good enough to keep things zen during the morning commute – whenever those become normal again. The performance was beyond the competing Cleer Audio Ally Plus and Amps Air Plus I tested the Panasonic against.

Call quality is also generally solid as you use the earbuds indoors. Using them as an office headset, the buds picked up my Google Assistant instructions and people on the other end of the line never reported massive issues in hearing me. The only downside is that they were prone to picking up background noise, particularly wind, when used outside.

So far so good. But the big question is how do the Panasonic RZ-S500W sound? The cheaper S300W’s were solid, enjoyable effort, and the similar but more expensive Technics pair offered precise audio quality. The RZ-S500W falls somewhere in between the two.

On a technical level the biggest difference between the S500W and the Technics is its use of smaller 8mm drivers and the lack of aptX support.

With real world use the sound is generally fine and will meet most users needs. Highs are ably handled and mids are generally fine. Listening to new-classical arrangements, the high end violin parts where suitably defined and held a different space to the mid-heavy violas and cellos. Rock guitar arrangements also held a suitable bite and power without ever taking on an acidic, nasally tone. 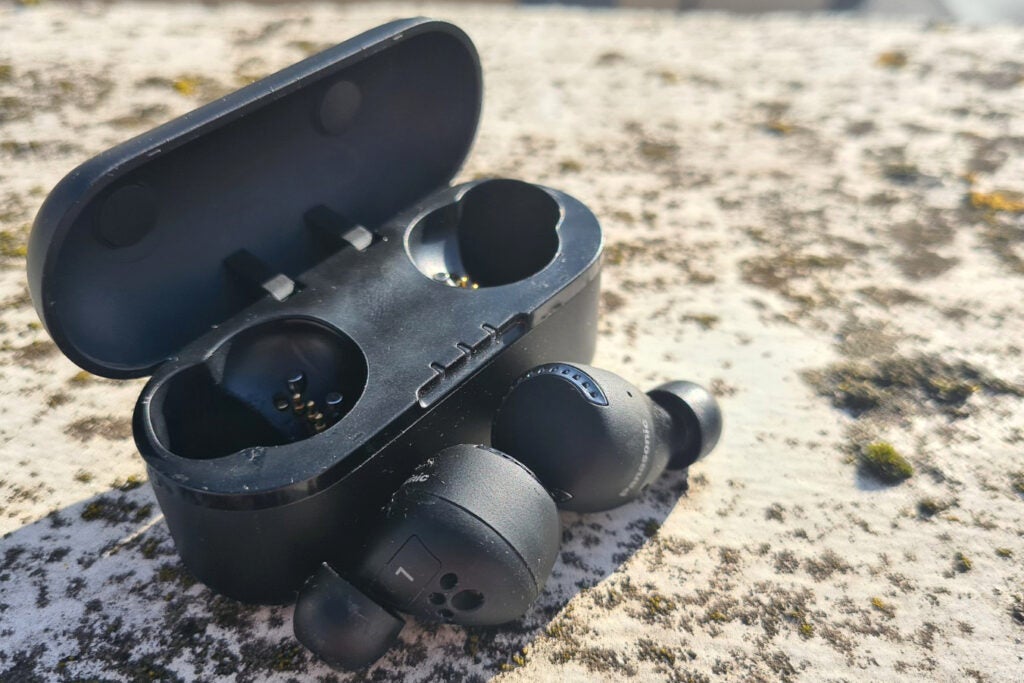 The only issues I had occurred when listening to more bass heavy genres. Here the bass wasn’t bad, it was just a little flabby compared to the Sony. Listening to industrial and synthwave music, the booming low end could, on occasion, drown out some of the more subtle mid and high heavy parts. Rumbling blues walking bass lines had bite and felt suitably powerful, but they weren’t quite as precise as the sound I got on the Sony and more expensive Technics.

The issue doesn’t completely ruin the sound, which is still a cut above many of the similarly priced sets I’ve tested, it just means they aren’t the best when it comes to audio quality if you like a neutral, accurate profile.

Connection stability is suitably solid. I haven’t had a chance to test them around signal areas like Waterloo or King’s Cross Station, but to date I’ve yet to experience any significant drop outs or interference.

During testing I found that if you’re after a solid value set of true wireless earbuds with reliable ANC, solid battery life and decent connectivity the Panasonic RZ-S500W are a good option. They don’t offer top of the line sound quality for the price, being a little bass heavy in some genres and the lack of aptX support is a pain for Android users, but otherwise they tick the right boxes.

You should buy the Panasonic RZ-S500W if…

You shouldn’t buy the Panasonic RZ-S500W if: