Panasonic’s first foray into the true wireless market is a success. The RZ-S300W are a solid pair of cheap wireless earbuds with a discreet look, impressive feature set and enjoyable sound. They’re not audiophile sound on a budget, so if you want excellent sound quality, there are other options in the market for the same price.

The Panasonic RZ-S300W is the budget-priced earbuds in the Japanese brand’s new true wireless range.

The RZ-S300W sits below the RZ-S500W in Panasonic’s first foray into the true wireless headphone market. The RZ-S300W is the cheaper of the two, drops the active noise cancellation but keeps Ambient Mode and a lengthy battery life for a competitive feature set.

So, is Panasonic onto a cheap true wireless winner with the RZ-S300W?

The Panasonic RZ-S300W were announced at CES 2020 and went on sale later in the year for $99/$119/€119. They’re the entry-level wireless earbud with the RZ-S500W sitting above them. The premium earbuds offer noise cancellation where the S300W make do with a transparency mode

The RZ-S300W are diminutively sized earbuds weighing just 4g each. The look is nothing out of the ordinary, the silver trim that runs around the outside of the touch panel is its one distinctive aspect.

That said, they don’t look cheap like other cheap true wireless earbuds can do, and despite the plastic nature of the build, the quality of the construction is reasonably good, as you’d expect from a brand such as Panasonic. Putting them in the ear is as simple as slotting them in, and the fit they provide is a good and secure one, reducing the effects of external noise. 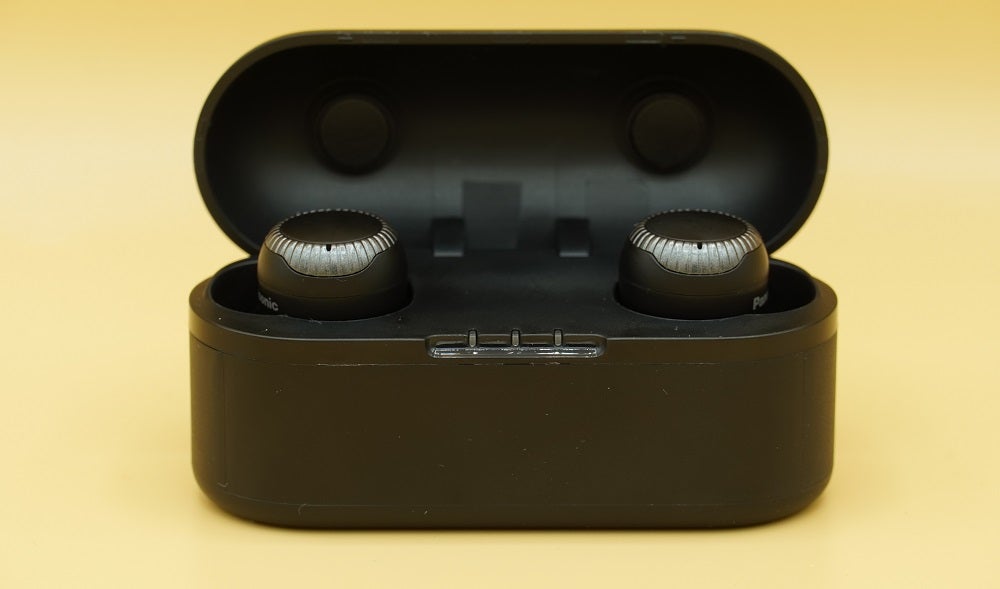 The buds come in a charging case that does feel on the cheap side and putting the earbuds in the case is always a fiddly experience. Open the case up and there are three LED indicators to gauge battery levels. The case itself is a bit it wider than most cheap true wireless cases but slim too. It should fit into pockets without much fuss.

Available in three colours, the choice is black, white and a minty green. Generously, you get two of every eartip size with XS, S, M and L options.

The word I’d use to describe the RZ-S300W’s audio is sweet. It’s a performance that’s light and laid back in nature. If power and bass is what you’re after then the Audio-Technica ATH-CK3TW will be more your speed.

A play of John Ottman’s The Nice Guys soundtrack, and the jazzy orchestrations suit its mood. Dynamically it’s decent if a bit mild in scope, and there’s a good amount of detail and clarity to how the instruments are represented. The soundstage it creates is one that’s wide and spacious, and with the right track the RZ-S300W can produce to what amounts to a rather sweeping and fluid presentation. 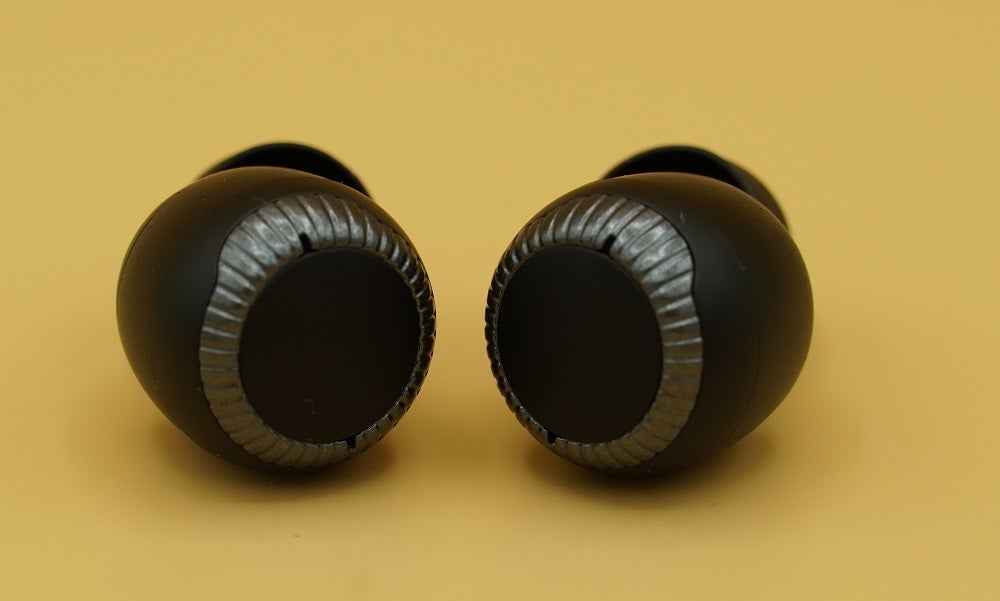 A play of Janelle Monáe’s Primetime and it’s able to dig up decent bass, its warm-ish, melodic tone making for an enjoyable sound that’s neither harsh nor overbearing.

Compare it to the Lypertek Tevi though, and their limitations come into sharper focus. Voices aren’t as clear, nor are they as expressive in their description. It loses a bit of detail in the midrange and can’t quite dig up detail from further back, so you don’t quite feel as if you’re hearing everything. It’s lack of punch and power also means it lacks a sense of definition and feels loose. It’s a sound to wallow in, rather than one that grips your attention.

All that said, the RZ-S300W are a likable pair.

The RZ-S300W’s specifications are where things get more interesting as Panasonic makes its case at the cheap end of the market. You get an IPX4 resistance, which is not to say these headphones are for fitness workouts, but they should be able to fend off splashes of rain.

Battery life is 7.5 hours in each earbud and a total of 30 with the charging case. And that’s 7.5 hours with AAC playback and 7 hours with the SBC codec. Quick charging can deliver 70 extra minutes from a fifteen-minute boost via the USB-C connection. A full charge can be done in 2 hours. 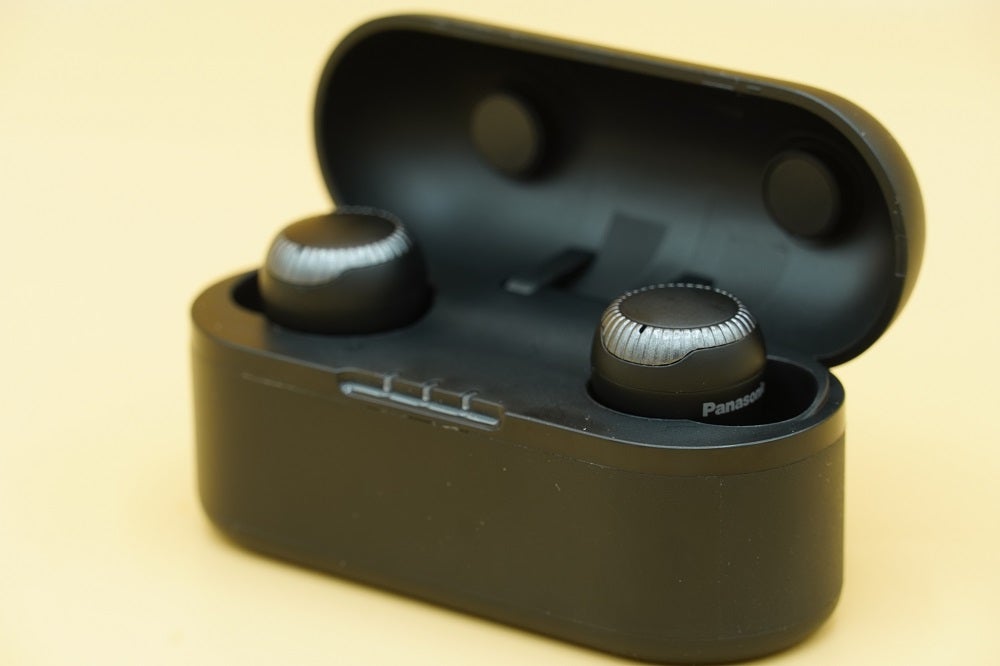 Alexa is built in. A long press on the left earbud activates the digital assistant, and depending on whether she’s your default helper she’ll either respond or a voice will suggest opening up the Alexa app. Alexa is fairly responsive though there are moments where she misinterprets what you say. Asking her what was on at the cinema led her to waffle on about the share price of AMC cinemas. Just remember to say her name before you pose a query otherwise tumbleweed passes by.

Onboard controls cover pretty much everything in volume, playback, Ambient Sound Control and access to Alexa. A tap on either side is enough to stop playback, a quick double tap on the left reduces volume and a triple tap bumps it up.

A double tap on the right skips a track and a triple tap skips back. It’s not too difficult to get the taps right as the sensor is responsive to any touches. A hold on the right earbud unleashes Ambient Sound Control.

Speaking of Ambient Sound Control, while it lets sounds in, the results can be inconsistent and artificial-sounding. I can hear the tapping on my keyboard as I write this review – but in busier places noises sound distorted. 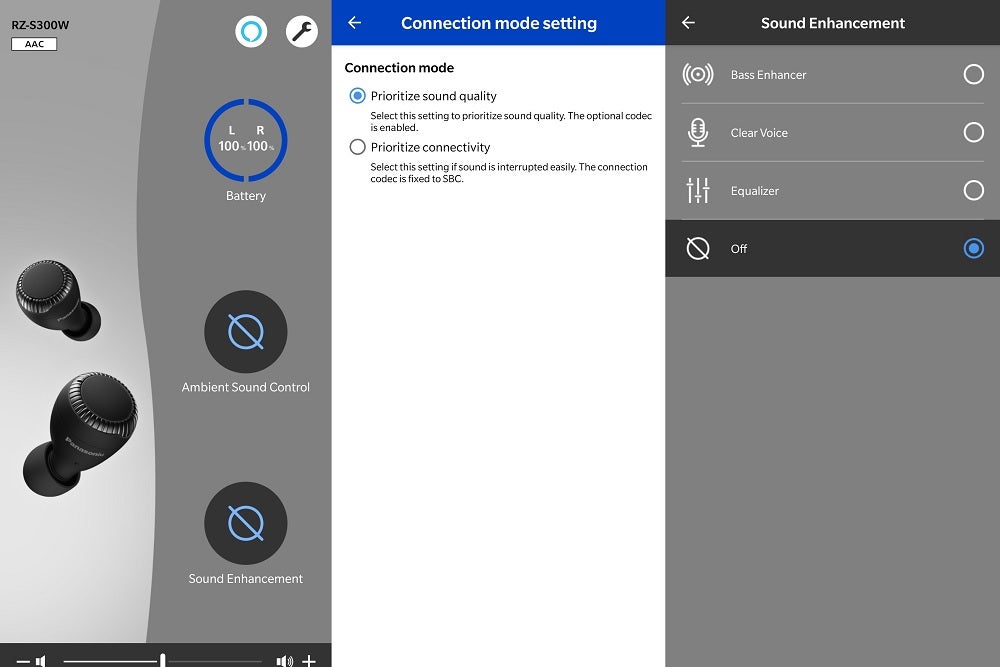 The RZ-S300W’s antenna structure integrates the touch sensor and Bluetooth antenna, which contributes to its smaller size. Using a left/right independent signalling system, audio is transmitted simultaneously to both earbuds and the effects are a more stable connection and less power usage. I can speak to the former, with the RZ-S300w having a reliably grippy hold when it comes to wireless stability.

What else? There’s six high-performance MEMS microphones that Panasonic claims can cancel out noise to improve call quality, with beamforming technology transmitting your voice for clearer vocals. As the earbuds use the independent signalling system, you can use just one earbud if you don’t want to put both in.

You should buy the Panasonic RZ-S300W if…

You shouldn’t  buy the Panasonic RZ-S300W if…

There are better-sounding cheap true wireless earbuds available if you’re after a more dynamic performance.

For around £30 the Urbanista London offers a warmer, thicker sound than the Panasonic, but features impressive noise cancellation (for the price).

The Ambient Sound Control sounds very artificial. I’d be more inclined to take the earbuds out than to activate it…