Panasonic may have been at the forefront of 3D in the TV world, but it’s been startlingly tardy about getting involved with 3D projection. Now that Panasonic’s PT-AT5000E debut 3D projector is finally here, though, it’s a relief to find that it’s been more than worth the wait.

Aesthetically, the AT5000 is a considerable improvement over previous Panasonic LCD projectors. Gone is the fat ‘concrete block’ sculpting of the brand’s previous PT-AE4000; in is a trimmer profile and some pleasingly rounded edges.

A panel to the right hand side of the lens comes off to reveal the built-in 3D transmitter, and a ‘joystick’ with which you can shift the image vertically or horizontally. Trying to use this joystick to get the images from the AT5000 correctly aligned on our screen was surprisingly difficult, though, as the joystick requires so much pressure to move the image that once it starts to go it tends to suddenly shift miles, making precise movements almost impossible. Such imprecision at the very start of the set-up process is actually quite bizarre – especially considering that the projector’s zoom and focus settings are handled mechanically, with much more finesse, via the remote control.

To calm ourselves down again after our experience with the image shifting joystick, we decided to peruse the AT5000’s spec sheet. And it really does make for some pretty delicious reading. It uses a full HD LCD chipset (sourced from Epson) for a start, and thanks to a completely reworked optical design it produces a claimed 300,000:1 contrast ratio (double that of last year’s AE4000) and 2000 ANSI Lumens maximum brightness output. These are enormously promising figures for a projector that costs only a tad over £3,000, however ‘optimistic’ they might be.

The new optical heart of the AT5000 is, crucially, built inside a sealed enclosure, which should keep the optics free of the dust problems that we’ve seen eventually blight some previous LCD models – even Epson’s otherwise mighty TW5500. Light comes courtesy of a specially created 200W lamp which pushes red more than normal lamps in a bid to compensate for UHP’s normal red deficiencies.

There’s also a brand new dynamic iris system in the AT5000 that’s designed to respond faster and more subtly to changes in image content, and crucially the LCD panels in the projector are driven at 480Hz – a speed which should minimise crosstalk and improve brightness when watching 3D.

One further improvement that could prove critical to the AT5000’s performance is the way its new design helps drain the potentially extreme amounts of heat coming from the projector’s lamp. The AT5000 really does run remarkably quietly considering how bright its images are – and unlike some 3D projectors, its running volume levels don’t change much at all when you switch into 3D mode. Excellent. 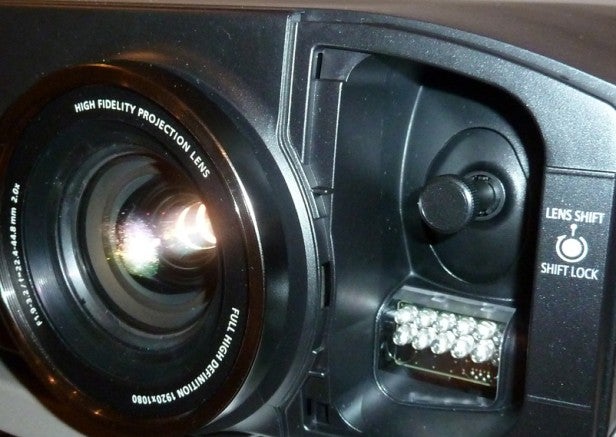 Heading into the AT5000’s onscreen menus, they’re quite pleasantly presented aside from the fact that the text used is rather ‘wiry’. They could look rather intimidating to relative home cinema novices, perhaps, but the truth is that they don’t need to cause any alarm since the AT5000 is one of those rare bits of AV kit that comes equipped with some genuinely useful picture presets.

Personally we found ourselves torn between the warmth and dynamism of the Cinema 2 preset and the ‘accuracy’ of the Rec 709 preset (Rec 709 being an industry-approved HD video standard). But people who like their images aggressively ‘poppy’ or who – shudder – have a bit of ambient light to contend with might prefer the Cinema 1 mode.

If you – or more likely, a professional installer – do want to fine tune pictures to the nth degree, though, the AT5000 has a wealth of colour, gamma and white balance facilities onboard. The interfaces for using some of these features are rather non-standard and complicated, though, so they really aren’t for the faint-hearted.

Panasonic has even introduced unprecedented flexibility to its 3D playback. For instance, you can adjust the individual colour settings for each ‘side’ or eye of a 3D image, in recognition of the fact that some 3D camera rigs don’t manage identical colour calibrations for both their lenses. There’s also a tool for adjusting the 3D image’s parallax settings to reduce or increase the 3D depth effect – handy if you’re one of those people who routinely feel tired when watching ‘normal’ 3D parallax settings.

One last feature of the AT5000 that film enthusiasts should celebrate at such an affordable market level is its ‘lens memory’ function, which allows you to set up and store separate image and lens settings for 2.35:1 anamorphic and 1.85:1-ratio films. Though please note that this feature does not work for 3D playback.

Although its 3D playback is ostensibly the AT5000’s headline feature, we actually started our tests with 2D material, since this is still likely to take up most of your viewing time. And we were frankly amazed by the quality of what we saw.

The optical changes Panasonic has introduced with an eye to 3D actually have a profound impact on its 2D images, giving them a level of dynamism, colour intensity and contrast that’s unprecedented on any LCD projector we’ve seen to date.

Images are so bright, for instance, even using the Cinema modes, that in a dark room they almost slap you in the face. And they’re even bright enough to be enjoyed with a little ambient light around – though obviously we would never recommend this.

Crucially, though, despite the uncanny brightness the projector also delivers an outstanding black level response, with completely credible, greyness-free black colours that also happen to look impressively stable even with the dynamic iris switched on. That said, should you prefer to turn the dynamic iris off, the projector’s native black level response is still superb. 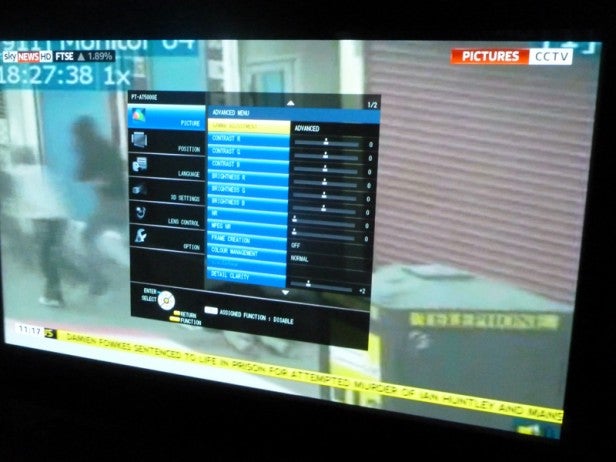 More proof of just how good the AT5000’s native contrast performance is can be seen in its terrific greyscale performance, and the amount of subtle detailing you can make out in even the image’s darkest corners.

Colours, meanwhile, take full advantage of the high brightness, red-pushing lamp to look both stunningly vibrant and punchy, but also subtle when it comes to blends and expansive when it comes to the range of colours on show. Tones also look entirely natural after calibration or even when using the Rec 709 preset, but given that it’s our policy never to dictate to any reader exactly how we think they should watch their beloved new AV purchase, we were also very appreciative of just how diverse the AT5000 can go with its various colour options.

Yet more good news concerns the sharpness of the AT5000’s rendition of HD material. On our 100in test screen even the tiniest details of the finest Blu-ray transfer appeared safe, sound and adorably clearly. Yet as more proof of just how good the AT5000’s native optics are, this flawless resolution looks completely natural, with no sign of the excessive grain or harsh-looking lines that might have suggested that the sharpness is being ‘forced’ or conjured up by sneaky processing.

Motion is handled with superb tact and naturalism, no matter what refresh rate the source might be using. And finally there’s just no video noise or LCD-related artefacts (such as the ‘screen door’ crosshatch effect) whatsoever to stand between you and your enjoyment of what you’re watching.

So blisteringly good are the AT5000’s 2D pictures, in fact, that when we first donned a pair of Panasonic’s 3D glasses, our initial feeling was one of slight disappointment. For after feeling so engrossed by the brightness and punch of the 2D images, the reduction in brightness and colour ‘pop’ caused by the move to 3D felt actually quite painful.

Over time we came to realise that these first impressions weren’t really fair. Actually the AT5000 seems to take slightly less brightness out of its 3D images than other 3D projectors, so our disappointment about the brightness reduction is actually more a testament to the stellar quality of its 2D pictures than it is a failing of its 3D pictures.

In truth the AT5000’s 3D pictures are very good by affordable projection standards. Their detail levels are excellent, colours are unusually believable in tone, the 3D effect feels natural and deep, and flickering issues are surprisingly minimal. The result is a thoroughly engaging 3D image that doesn’t leave you feeling fatigued.

However, there are still a couple of issues. First, the amount of brightness lost from the picture can – as with most other 3D projectors – lead to shadow details getting crushed out of the picture during dark scenes. Second, while the AT5000 in general suppresses crosstalk very well, it certainly wouldn’t be accurate to describe its 3D pictures as ‘crosstalk free’. You can still clearly see, for instance, two ghostly echoes of each lantern during the infamous Tangled lantern festival sequence. And whenever such crosstalk occurs, it’s invariably distracting. 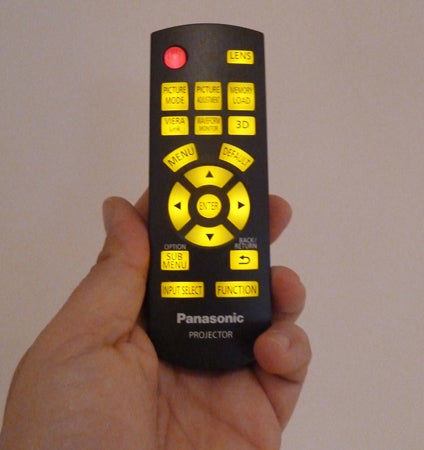 The only projector we’ve seen that doesn’t suffer at all with crosstalk, though, is the Sim2 Lumis 3D-S. And that costs £30,000. It seems from memory (as sadly we don’t still have a model for direct comparisons) that the £4,000 Sharp XV17000 also suffers less with crosstalk than the AT5000. But the Sharp model isn’t nearly as accomplished with 2D as Panasonic’s AT5000, and that’s a big deal given the ratio of 2D to 3D sources there are for you to watch.

Verdict
In the end, living with Panasonic’s debut 3D projector has been a great if slightly unexpected experience. For while by any comparative measure the AT5000 is a great projector with both 2D and 3D, its 2D pictures have proved so delicious in terms of their brightness and colour punch that we’ve felt slightly less inclined than anticipated to choose to watch something in 3D rather than 2D.

Still, in a way even this fits in perfectly with what’s really special about the AT5000. For it seems to us that the single most lovable thing about it is that it’s got the native quality, the long list of features, the open-mindedness and the raw, cock-sure confidence to be exactly what absolutely any individual user wants it to be. Which really is a heck of an achievement for £3,200.