Yes, yes, we know the Olympics has led to the rejuvenation of an impoverished part of London and – supposedly! – a revamp of an aging, inefficient public transport system. But tech geeks that we unashamedly are, we’re currently more excited about one of the Olympics’ more ‘minor’ side effects: the appearance of a new Panasonic projector.

Panasonic – which is, of course, one of the sponsors of the London Olympic Games – has got so excited by the thought of households across the UK wanting to watch the Olympic events on a bigger screen than a normal TV that they’ve come up with the PT-AH1000E: a high-brightness ‘casual theatre’ projector designed for use in bright, social room environments yet which can allegedly also be converted into a serious lights-down movie machine.

How it looks
The AH1000E’s high-brightness charms aren’t obvious from its design, mind you. In fact, despite pumping out 800 Lumens more than the 2000 Lumens delivered by Panasonic’s excellent ‘serious’ PT-AT5000E home cinema projector, the AH1000E’s chassis looks more or less the same as that of its illustrious sibling. Certainly the dimensions and basic shape all match up. 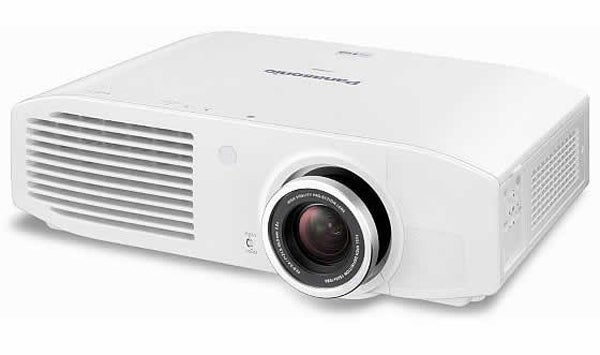 However, the AH1000E is white rather than black (a sensible decision for a projector intended for normal living spaces, where white ceilings are commonplace). Plus it features a pop-up top cover for easy access to the compartment for the 280W lamp. A lamp which, it turns out, is newly developed for the AH1000E and uses Panasonic’s Red-Rich technology for boosting LCD projections’s customarily flat red tones.

Unlike the AT5000E, the AH1000E does not play 3D. So while the 2000 Lumens of the AT5000E was mostly used for combatting the darkening effect of active shutter 3D glasses, the 2800 Lumens of the AH1000E are all for combatting the potential light – natural or artificial – that the projector may have to contend with in a normal living room environment.

Easy does it
It’s pleasing to find as we go about setting the AH1000E up that Panasonic really seems to understand the needs of a more casual projector audience. For instance, the x2 optical zoom provided makes it easy to adapt the projector to almost any room size. Also mostly brilliant in concept is the little joystick – tucked under a slide-off panel next to the lens – that provides a no-brainer means of shifting the image left, right, up and down to get it positioned correctly on your screen without having to resort to dreaded keystone correction.

There are limitations to the amount of movement the joystick delivers, and its mechanical structure means you sometimes find the image moving diagonally rather than straight up/down or left/right as you want it to. But for the most part the joystick is a great way of simplifying set up for the casual users the AH1000E is self-consciously aimed at.

Panasonic has even gone so far as to try and save casual users from having to worry about the projector’s picture settings. For tucked away on its feature list is the groovily-named Light Harmonizer 3. This automatically analyses the projector’s surroundings using integrated ambient light and colour sensors, and adjust the image’s white balance and gamma curve settings – among other things – accordingly. Obviously we’ll come back to this system later.

More potentially telling automation of the picture producing process comes from the AH1000E’s dynamic iris, which adjusts the amount of light let out of the lens according to the demands of the material being shown. The flexibility or otherwise of the dynamic iris could play a critical role in how well the projector adapts to both bright and dark room viewing.

Yet more evidence of just how much thought Panasonic has applied to making the AH1000E potentially ‘all things to all men’ can be seen in the seven picture presets it provides. These include everything from Game and Sports modes to Cinema, Vivid Cinema and even Rec 709 modes (the latter being a video industry standard for HD TV).

In-depth calibration
Now that we’ve started to spot stuff designed to try and satisfy more serious users, it must also be said that the amount of systems provided for fine-tuning colours and gamma settings is startling for a predominantly casual projector. In fact, we’d say it’s over the top, with the fussy menus making colour and calibration far too complicated and ‘teccy’ for the casual users to handle. Still, while the calibration tools might be tough to use, they do at least suggest that the Panasonic is really serious about making the AH1000E a serious dark room as well as a casual light room all-rounder. 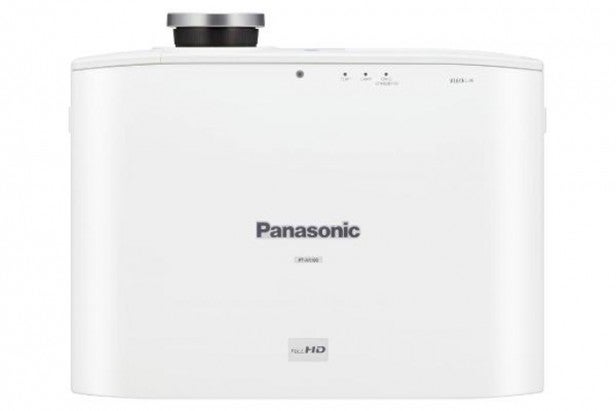 Starting out our tests with the lights in our test room turned pretty much to maximum (and using our normal neutral test screen), we were genuinely impressed by just how watchable the AH1000E’s pictures are.

With the Light Harmoniser and Dynamic iris systems both in play, the projector delivered images bright enough to still look punchy during bright scenes but which also remained surprisingly engaging during dark scenes. Certainly there’s a loss of shadow detail when watching dark scenes in such unhelpfully bright room conditions, but the key light ‘highlights’ of any dark scene remain intact enough for you to be able to tell what’s going on without feeling too distracted by the ambient light’s impact. This is a very impressive result indeed for such an affordable casual projector.

Also excellent for the money is how well the AH1000E adjusts the colour balance of its images in response to our bright room conditions. In other words, it’s clever enough to know that when you increase the brightness of an image you also need to adjust its gamma and colour controls if you don’t want colours to become unbalanced or overcooked. Even the tone of the light in the room is taken into consideration.

HD delight
More good news finds HD images looking phenomenally sharp during our bright room tests, as the AH1000E overcomes the rather soft finish you usually see when trying to watch a projector in a bright environment.

The only two significant downsides to the AH1000E’s bright room performance using the out of the box settings, really, are that the projector runs really quite noisily when it’s pumping out anything like its maximum brightness level, and that the dynamic iris is too aggressive, causing some pretty obvious ‘jumps’ in the image’s overall brightness level.

This problem can, of course, be alleviated by turning the dynamic iris system off. But doing so results in a quite marked drop off in the image’s punchiness. So with only straight on/off options to choose from, we guess you’ll just have to try both options for yourself and decide which you prefer.

However, before anyone has a nerd-rage meltdown about this, we’d say that the motion processing system is subtle enough not to be something anyone should really fear. Certainly with 24p Blu-rays it delivers just a touch more fluidity, so that pictures still look natural. And it does this without causing seemingly any significant unwanted side effects.

Motion potion
Of course, you could argue that if the impact of the Motion system is subtle, then you might as well turn it off. But so far as we’re concerned, the real point is that it does alter the image’s ‘lavour slightly without mucking things up, and thus offers users a genuine personal choice. And genuine, sensible choices are something we always like to see, however much they might upset a certain breed of AV enthusiast!

Adjusting various ‘banks’ of lights in our room, as well as throwing open the curtains proved a very interesting exercise. For the Light Harmoniser feature impressed us greatly with its ability to adapt the picture ‘on the hoof’ to all the different ambient light circumstances we threw at it. Very clever.

There is, though, a limitation to the Light Harmoniser’s abilities. For the nearer you get to darkness, the less effective the automatic adjustments seem to get. In particular, the projector makes no attempt to control the light levels in the picture any further than is possible by the dynamic iris. By which we mean it doesn’t actually adjust the light level being output by the lamp, meaning black levels never achieve the sort of depth likely to satisfy a serious movie fan.

Obviously a truly dynamic lamp output system is probably just not possible on a projector anything like as affordable as the AH1000E. But the projector does have an Eco lamp mode that runs the lamp at a lower level, so maybe the Light Harmoniser processing could have at least added that to its list of adjustment criteria?

Black with a touch of grey
Having said all that, it is, of course, hardly a major headache to turn the lamp into eco mode yourself if you want to improve the image’s black levels. However, as we’d feared – and perhaps inevitably – even using the eco setting the AH1000E’s black level reproduction isn’t particularly good. There’s clearly visible tell-tale greyness swimming around over parts of the picture that should be black, and dark parts of the picture tend to look rather hollow thanks to the projector struggling to resolve shadow details.

The projector does, thankfully, run a lot quieter with the lamp in Eco mode. But the noise level is still only around what we’d expect to hear now from a ‘normal’ home cinema projector running in high lamp mode.

At this point it’s high time we did a reality check. For really, no matter how many calibration options Panasonic had chucked at the AH1000E it was probably never going to be entirely realistic to expect it to perform equally brilliantly in both bright and dark conditions. Especially given how affordable it is.

Verdict
While the die-hard movie fan in us might wish for more black level depth from the AH1000E, with our real-world head on the best we could reasonably have expected from such a deliberately casual projector would be that it works well in a typical family and friends viewing environment, can be used instantly without requiring lots of – or even any! – manual adjustments to suit different viewing conditions, yet also provides plenty of calibration tools and a fair dark-room performance for occasional ‘serious movie’ sessions.

And measured fairly against this real-world list, it’s actually hard to see how the AH1000E could have been much better. Certainly for our money it’s more flexible than the similarly-intentioned Runco LS-HB, and that costs nearly five times as much.