A few years ago, Panasonic’s NV-GS400 quietly took the lead as the sub-£1,000 camcorder of choice for video makers with professional aspirations. Sony was busy taking features off its premium consumer models to make them easier to use, but this also made them less attractive for semi-professionals. In contrast, the NV-GS400 was packed with features and had awesome image quality to match. The NV-GS500 is the NV-GS400’s successor, although it’s a slightly different beast. As MiniDV enters its twilight years, can Panasonic give the format a last gasp of quality? 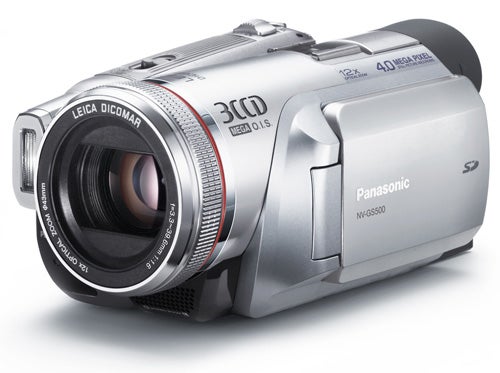 So the NV-GS500 has a heritage to live up to, and a first glance at the specifications look promising. It’s based around a trio of 1/4.7in CCDs, like its NV-GS400 predecessor. These are larger than Panasonic’s lower-end three-CCD models, which use 1/6in CCDs. So the NV-GS500 should offer superior low-light sensitivity. Each CCD has a megapixel resolution, which Panasonic amalgamates for still images, and then adds a bit of interpolation to make 4-megapixels. The maximum resolution for digital photography is therefore a fairly useful 2,288 x 1,728. A SD memory slot is available for photo storage, although no memory is supplied in the box.


Aside from its image quality, the NV-GS400 gained its position of glory thanks to a comprehensive range of enthusiast features and manual controls. The NV-GS500 unfortunately doesn’t quite live up to its predecessor, although it does still have plenty of premium capabilities. Optical image stabilisation is of course present rather than the less effective electronic variety – as you would expect in a top-of-the-range camcorder. Tapes load from the top, too, which will make them easier to change when the NV-GS500 is attached to a tripod. Manual focusing is facilitated by a lens ring, and a regular accessory shoe is available on the top of the camcorder. A microphone input is available, as well. But incredibly no headphone socket is included. So you won’t be able to monitor audio quality, which is particularly strange when you consider that sound levels can be controlled manually.

The NV-GS500 follows Panasonic’s usual control system for its consumer camcorders. The majority of important settings are available by simply pressing the joystick and flicking through a few pages of options. In Auto mode, only backlight compensation, tele macro and soft skin modes are available. But flick the switch under the LCD panel into manual mode, and a wealth of extras appears. The aperture can be set between F1.6 and F16. You can also add gain from 0dB to 18dB on top, something few non-Panasonic consumer camcorders offer. The shutter can be varied from 1/50th to 1/8000th of a second, entirely independently of aperture and gain – another handy feature for the control freak. White balance options are more pedestrian, and include the usual manual and auto modes plus presets for indoors and outdoors. 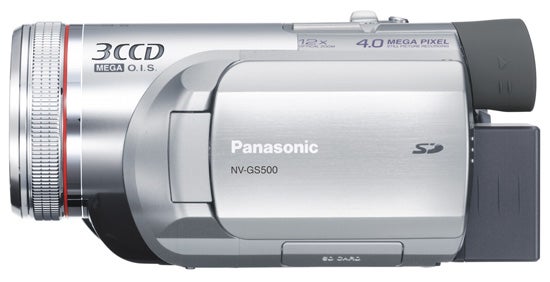 When full manual control is too much trouble, the NV-GS500 also offers the usual Scene modes. These include Sport, Portrait, Low Light, Spotlight and Surf & Snow. Canon’s premium consumer models offer many more Scene modes, but Panasonic’s are the most useful options, covering the broad range of shooting conditions.


However, as great as the NV-GS500’s manual controls may be, the NV-GS400 had a fair bit more. It offered picture colour adjustments and contrast. Its manual features were also easier to operate, with zoom, aperture and shutter also controlled with the lens ring – not just focus. This made for a very workable compromise on the multiple lens rings offered by professional camcorder models. It had a progressive shooting mode, too, and a larger LCD – 3.5in, where the NV-GS500’s is only 2.7in. So the new model has been dumbed down considerably, making it less attractive for the aspiring professionals who loved the NV-GS400, although it is quite a bit cheaper, too.

The NV-GS400 offered image quality to give semi-professional models a run for their money, and the NV-GS500 actually outperforms it. In the best lighting, its colours are on par, but the picture is even sharper and the dynamic range slightly better too. Moving to a reasonably well lit indoor environment, the excellent performance continues. Colours are a little more muted than in bright sunlight, but still very faithful. The 1/4.7in CCDs acquit themselves well. Best of all, noise levels are still fairly low – where the NV-GS400 was already a little grainy.


Moving to worse illumination, equivalent to candlelight, the image naturally loses a lot more colour and gains a heavy amount of noise. The sharp image also disappears. However, although the NV-GS500 can’t match semi-professional models in these kinds of conditions, it does manage to surpass its predecessor across the board – and that’s pretty commendable for a camcorder costing just over £600. So in this respect the NV-GS500 is a worthy successor. 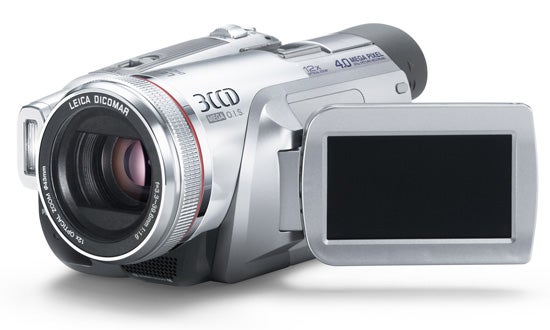 Being a DV camcorder, the NV-GS500’s video will be compatible with virtually all editing software. Apart from the necessary FireWire jack, the NV-GS500 has a proprietary connection for a breakout cable sporting composite video, S-video, and RCA audio. However, unlike the NV-GS400, these are output only, so you won’t be able to use this camcorder to digitise straight from analogue sources. A USB port is available for accessing the contents of the SD card slot, but also turns the camcorder into a 320 x 240-resolution webcam.


After the revelation which was the NV-GS400, the NV-GS500 is a bit of a disappointment. Those who are looking for a great semi-pro camcorder would be better off picking up the older model second hand, even if the NV-GS500 has better image quality. Nevertheless, this is still a capable DV camcorder, and puts up a good fight against competitors from Sony and Canon which are similarly dumbed down (JVC no longer produces a DV camcorder in this price range). However, if you do like the look of the NV-GS500, hurry up and get one soon. Stocks are dwindling, and only a few shops still have this model available.