Three CCDs used to be the hallmark of professional-grade camcorders. But in 2003 Panasonic started to bring the technology down to models well under a grand. Now, amazingly, you can pick up a Panasonic camcorder with a trio of sensors for under £250 – well into bargain basement territory. The NV-GS230 is a MiniDV model, so is almost yesterday’s technology. But if you’re still resisting the urge to move up to high definition, or just don’t want to spend that much on a camcorder, MiniDV remains a value choice.


Although the NV-GS230 incorporates three CCDs, they are rather small, which will have an impact on low-light performance. Each one is 1/6in and has a gross complement of 800,000 pixels. Panasonic aggregates these together for still images, allowing the NV-GS230 to boast 2.3-megapixels, which provides 1,760 x 1,320-resolution photos. An SD memory card slot is built in for storage. 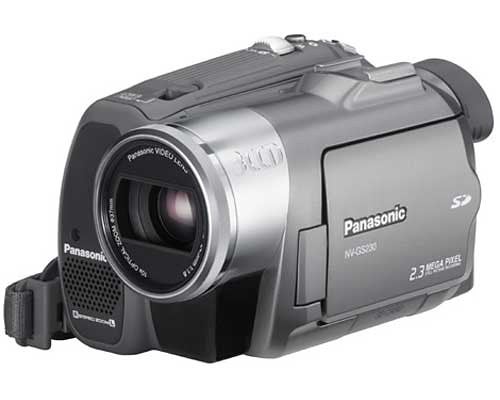 Amazingly, despite the rock-bottom price, the NV-GS230 still has plenty to attract the video enthusiast. There’s a standard accessory shoe, with both microphone and headphone minijacks to go with it. Tapes load from the top, too, so you won’t need to unscrew this camcorder from the tripod quick-release to change tapes. As you would expect for a sub-£250 camcorder, image stabilisation is electronic rather than optical, but only the most expensive models use the latter. And what looks like a focus ring on the lens is merely a short hood that can be screwed off. There’s also no built-in lens cover, with Panasonic opting for a traditional protective cap instead.


Manual focusing is actually performed by evoking the appropriate mode and then using the joystick. It’s a little fiddly, but does the job. The joystick is also home to backlight compensation, soft skin enhancement, tele-macro, and night view mode, plus a digital fade effect for those who prefer to stick with in-camera editing. Although the NV-GS230 doesn’t appear to have a video light built in, the LCD panel actually doubles for this function. Toggle 0 lux night mode, swivel the panel over to face forwards, and it turns white. This provides enough illumination for picking up some footage in darkness, but the shutter speed is dropped so low the frame rate is very jerky.

The NV-GS230 shows Panasonic’s usual generosity of functions when you switch to fully manual mode, which unlocks a host of extra capabilities. White balance options include automatic and manual, with only two presets for indoors and outdoors. But shutter speed can be adjusted from 1/50th to 1/8000th of a second, and iris from F/16 to F1.8, with up to 18dB of video gain on top. Best of all, the shutter and exposure options can be configured separately, too. Canon only provides aperture priority modes, and Sony doesn’t include manual shutter control in its recent consumer models at all. Neither manufacturer offers the manual gain of the Panasonic, either.


The remainder of the functions require a trip to the menu. Here the five scene modes can be found, including Sports, Portrait, Low Light, Spotlight, and Surf & Snow. The menu also includes a selection of useful functions. Turning on Zoom Mic locks the audio into the video zoom, focusing sound recording on the same distance as the visuals. The Wind Cut feature attempts to reduce the effects of wind noise. As an alternative to DV’s 16:9 option, Cinema mode shoots 4:3 video but letterboxed with black bands above and below to make the visible area a 16:9 strip in the middle. 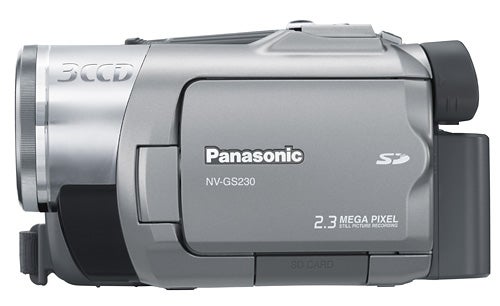 Thanks to the three CCDs, the NV-GS230 is capable of excellent colour fidelity in good lighting. The image is very sharp, although this appears to be electronically enhanced as there is a little ghosting round the edges of objects. There isn’t much evidence of noise, though. This is still the case in lower light, although colours wash out quite a bit. Dropping the light still further causes a significant decrease in quality, with most of the colour information lost and a lot more grain evident.


The image quality is still slightly better than Canon’s MD160, in low light, with a little more colour retained. But whilst the NV-GS230 easily outperforms the MD160 in good lighting, the difference is much more marginal as illumination drops. This is still a budget camcorder, after all. It’s not going to be much use for recording a romantic candle-lit dinner, and footage shot in a dimly illuminated room will be rather grainy too. But holiday footage in Spain should look great.

Being a DV camcorder, the NV-GS230 naturally sports a FireWire port, so you will be able to capture and edit footage with any FireWire-equipped system. Virtually all software supports the DV video format, too. The headphone socket doubles as an AV output for composite video and RCA audio. There’s even S-video built in, although all the analogue video ports are output only. Sadly, so is the FireWire port, so it won’t be possible to record your edits back to tape. 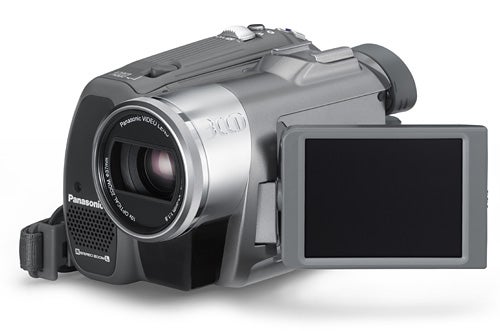 Presumably, Panasonic took this decision to keep the costs down, as there is still a higher tax in the EU on video devices able to record over a digital connection. As well as providing access to the contents of the SD memory card, the USB port can be switched between capturing DV on a PC or to use the NV-GS230 as a webcam, which is a handy extra capability.


After a decade of dominance, DV camcorders are fast losing out to new video formats and media types. But there are still a few years of life left in the old dog, as Panasonic’s NV-GS230 illustrates. It lacks a few important features, such as FireWire input, and low light performance matches the price. But if your budget is small, the NV-GS230 is can still shoot decent video. The audio connectivity options and manual controls are comprehensive, too. As a low-cost way of trying your hand at making video, it still makes some sense.