What is the Panasonic NN-DS596?

The Panasonic NN-DS596 is a microwave-grill-oven combi that features a steam oven. It has a large capacity and a flatbed design.

Thanks to its rectangular, full-width tray, which slides into the appliance like an oven shelf, it is possible to use the Panasonic as additional oven space as well as for microwave cooking. 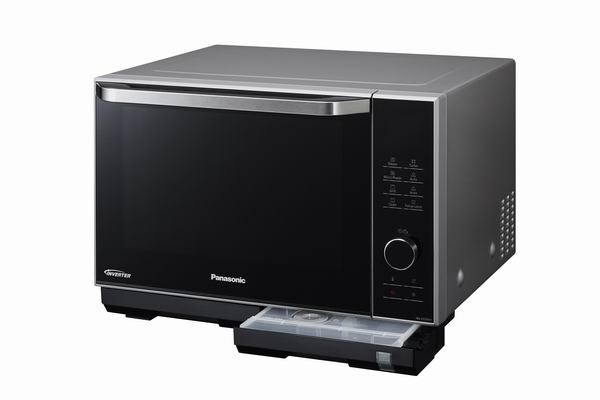 The Panasonic is an undeniably high-end appliance. It’s large, contemporary and classy. The finish is a discreet black glass that seems impervious to fingerprints and the curved handle for its pull-down door is well made.

It has a flatbed design rather than a turntable, which Panasonic says results in 27% more usable cooking space. The lack of turntable definitely lets you cook larger dishes.

Two features differentiate it from more affordable combis such as the Panasonic NN-DF386. The first is that it offers steam cooking – as an oven, but also in combination with the microwave or quartz grill. This can reduce cooking times as well as keeping food moist.

Its other unusual feature is that it comes with a ribbed tray that’s rectangular and fills the width of the oven (but no wire rack). This tray, called the Pana-crunch pan, is used for the grill and oven. It’s especially good for use in combi mode, where the pan absorbs microwaves and turns them into heat to cook the base of your food; the grill cooks from above. The result is even cooking and an end to soggy bottoms.

There are plenty of smart programs for popular foods, with a cheat sheet inside the door providing you with a list from which you can choose. Or you can cook or defrost by time or weight, with an inverter microwave providing precise power control for even results. 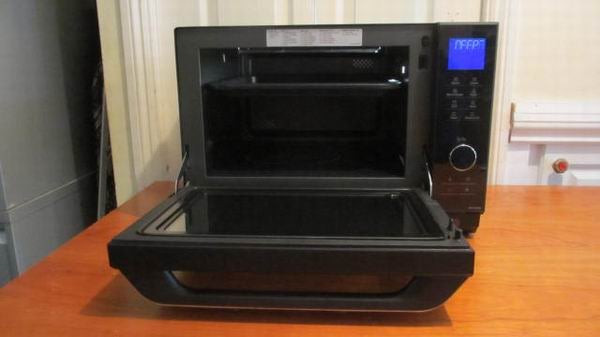 It’s definitely a good idea to keep the Panasonic’s instructions handy. In return, you’re rewarded with recipes and also detailed advice on cooking times. For example, it offered precisely how long to defrost a pitta bread for (90 seconds). The results were good, but initially warm and soggy; the pitta was fine once it had rested for a few minutes – but not quite the perfect precision of the Panasonic NN-DF386.

Next I cooked frozen pizza on the Pana-crunch pan, using a combi mode, to see if it lived up to its promise of a crisp bottom. The interior is well lit, so that I could keep an eye on progress.

The results were… interesting. The bottom was indeed crisp, with black parallel lines on it as if it had been on a griddle. The top was cooked well. The crust was slightly overdone. But much of the cheese had melted off the top of the pizza and pooled beside the slice, becoming burnt on the pan. I had to trim those bits off. 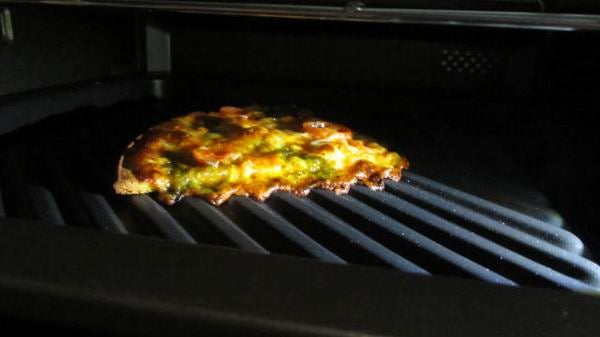 Of course, what’s most interesting about the Panasonic is that its oven also offers steam cooking. There’s a water tank on the right, below the door, and to the left is a drip tray.

This is an exciting addition. We all need the extra cooking space afforded by a combi oven, but the NN-DS596 offers something more.

There are plenty of recipes featuring steam cooking in the instruction manual: I picked out cauliflower cheese, because it uses all the functions. The recipe stated that I pick the Auto Steam Fresh Vegetables option, which wasn’t hard because as you cycle through the various programmes, the scrolling text offers up the full name.

What was more difficult was  that it then demanded the weight. The recipe just told us to chop up a whole cauliflower; there was no mention of weighing it (for the record, it was 1kg). But the programme only cooks a maximum of 320g, so I plumped for that.

The Panasonic embarked on a 15-minute cooking cycle, with the steam injected from the top of the cavity. The did become pretty steamed up to check progress – and opening the door will let the steam out at best; scald you at worst. 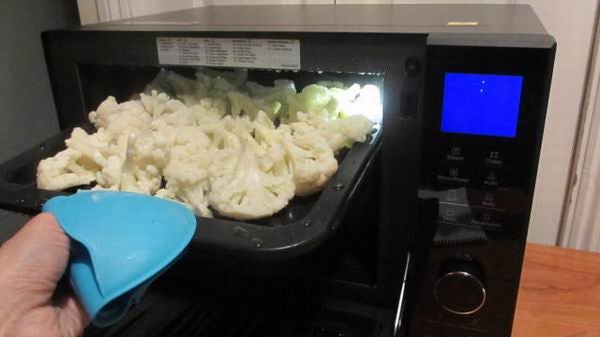 In the meantime, I rustled up a cheese sauce on the hob. This is possible using the microwave, but if you want to save time then it’s best to cook things in parallel, not series.

The cauliflower came out cooked just about right. Not quite al dente, but not soft either. The process was no faster than steaming in a pan, but it was convenient and low maintenance.

I returned the dish to the Panasonic for baking. It recommends cooking for 5-10 minutes at Grill 1 + Low Microwave. This is incredibly quick when you compare it with an oven. The results were really good: cooked through, crisp on top, creamy below the crust. 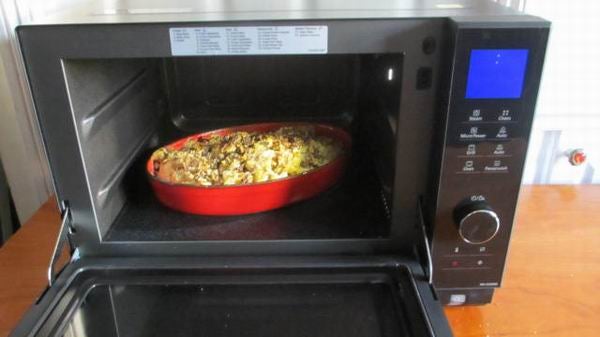 Jacket potatoes can either be cooked quickly via the microwave alone, or a little slower with the  grill/microwave combi. I went with the latter. The instructions – which you should always have to hand – stated Grill 1 + Microwave Low for 15 minutes. And to use a Pyrex dish: this model doesn’t come with a wire rack and the Pana-crunch would presumably give your spud a crunchy bottom.

The potato was good, but not head-and-shoulders above a jacket spud cooked in a conventional oven. To be honest, the Panasonic NN-DF386 grill-microwave combi delivered a better potato, perhaps because of the wire rack. 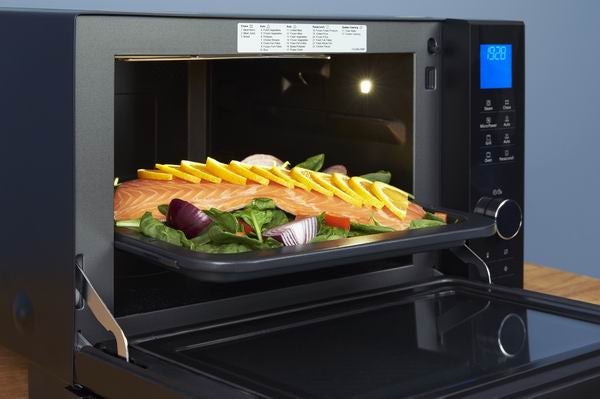 Should I buy the Panasonic NN-DS596?

The NN-DS596 is very well-featured, high-end combi microwave that gives good integrated models a run for their money. And it’s a decent option if you want to cook with steam. The Pana-crunch tray works well, too.

However, the excellent Panasonic NN-DF386 costs around £100 less and is equally well featured – except that it doesn’t do steam-cooking. It even cooks some items better than the NN-DS596, so if steam isn’t a dealbreaker then it’s worth considering

This combi microwave is a good choice if you want steam cooking and extra oven capacity.