What is the Panasonic NN-CF853W?

The Panasonic NN-CF853W is a large, family-sized combination microwave, grill and fan-assisted oven. It has a flatbed rather than a turntable, which means it can be used to cook and reheat large dishes. It’s very similar to the Panasonic NN-CS894S but without the steam.

It’s very capable and has a large number of programs. But if you already have enough oven and grill space in the kitchen then the only reason for buying a big, premium model like this is to benefit from its combination programs – these combine the speed of microwave cooking with the browning of an oven or grill. 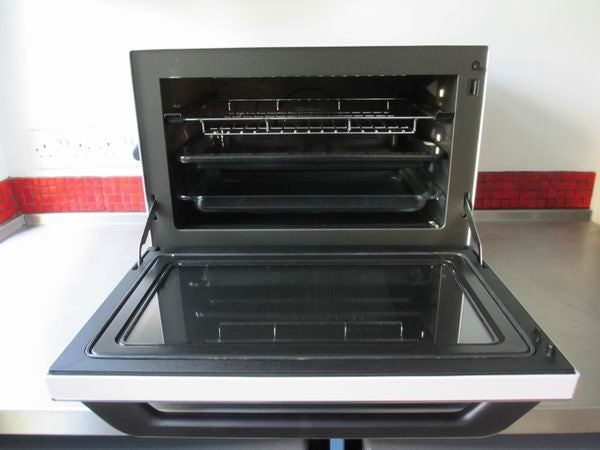 The Panasonic is a big beast. Its footprint is a bit bigger than most microwaves but it’s much taller. As a result it’s also very heavy, not easy for one person to lift. It’s white on the top and sides, but with a glass and stainless steel front.

As a microwave it’s large, with a 32 litre capacity ideal for family cooking and a flatbed design rather than a turntable. So you can, for example, reheat food in large rectangular dish that would get stuck on a turntable. It has three shelf positions and comes with a wire oven shelf, glass shelf and enamel shelf. The design is almost identical to the Panasonic NN-CS894S, but because it doesn’t feature steam cooking there’s no water reservoir: instead the drip tray under the door is full-width. 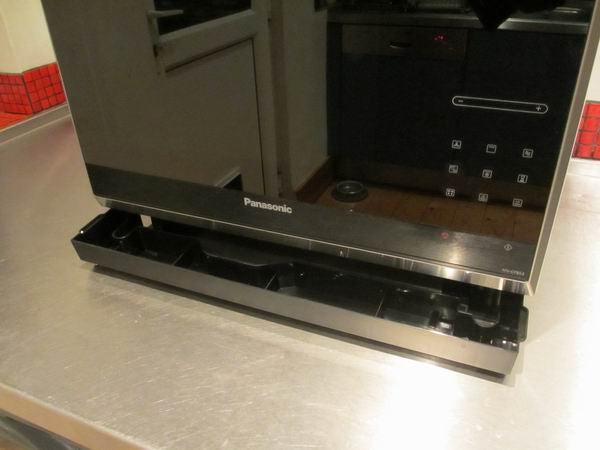 The Panasonic’s full-width door above the tray opens downwards like an oven door. Which makes sense considering it boasts all the same features as your oven and more. This is nice and ambidextrous, and safer than a hot oven door potentially swinging back on you.

The controls on the door are all touch-sensitive buttons, icons representing microwave, grill, convection and various combinations of them all. And instead of a knob, there’s a touch-sensitive slider – you can either tap plus and minus or drag a finger across it to adjust cooking time.

It has self-cleaning, catalytic linings on the top and back, so most spills can just be wiped clean. It also has an inverter. A magnetron (that’s the gizmo inside that makes the microwaves) can only be switched on or off, not turned down to low power. Most microwaves achieve low-power cooking then by turning the magnetron on and off. This and other Panasonics instead have an inverter so the magnetron is powered using  an alternating current, which means its six power levels can be controlled precisely rather than just switched on and off.

Oven-wise temperatures range from 100°C up to 230°C for baking bread and pizza (this is one of the few differences from the Panasonic NN-CS894S, which goes down as low as 40°C for proving dough). 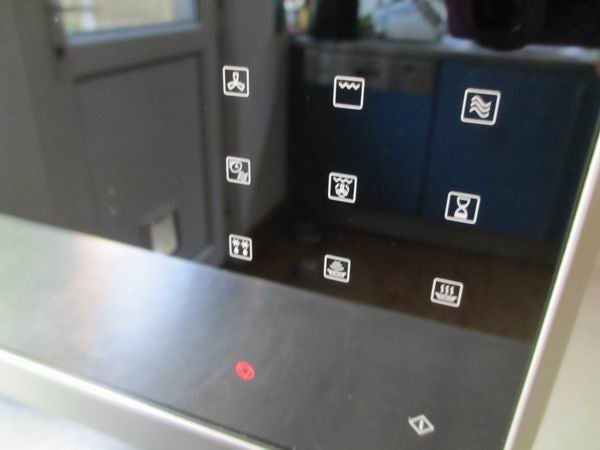 First impressions are that the sleek-looking Panasonic’s controls take some getting used to, simply because they’re all icons and there are so many different functions that it’s hard to know what’s what. They will certainly baffle a houseguest trying to reheat a cuppa.

The ultimately the icons do make sense, plus the large scrolling display spells out what you’ve selected, so you can always cancel it if you got it wrong. Symbols on the display also tells you which type of shelf to use in which position. 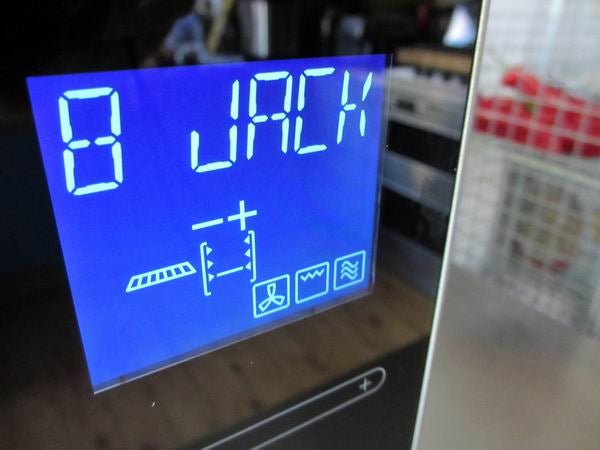 We cooked a large (660g) jacket potato using the Panasonic’s auto sensor program, which doesn’t require you to set a cooking time, power or weight. At first it kept us in suspense, taking a couple of minutes for the oven to come up to temperature before revealing that it was going to cook the potato for 15 minutes.

The resulting spud had a good, oven-crisp skin but wasn’t quite cooked in the middle so we gave it an extra 5 minutes of microwave cooking at full power to finish the job. The auto sensor wasn’t perfect, then. But it was a good start that didn’t require complex programming. 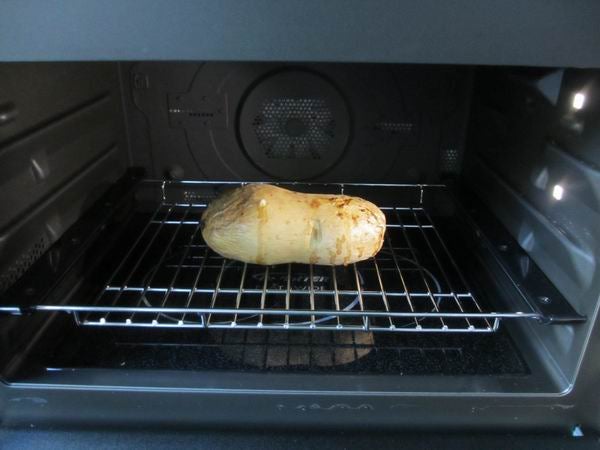 The flatbed base of the oven proved very easy to clean and the glass front was surprisingly free of fingerprints: you get a few greasy prints over the buttons themselves, but nothing unsightly.

We tested the grill, which toasted slowly but evenly. And also the microwave’s ‘chaos’ defrost function which pulses randomly for faster and more even results, which worked ok but was slower than expected and didn’t seem more effective than an ordinary defrost setting. 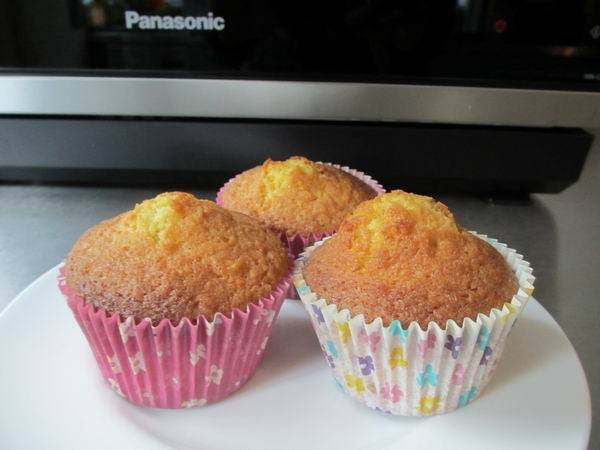 We also cooked some fairy cakes in the fan-assisted oven. This took 22 minutes (a control cake, pictured in a white case, baked in our Neff fan-assisted oven took 20). The cakes were slower to rise, and rose less, than the Neff and the browning was slightly uneven: the bits nearest the sides of the oven were browner.

The resulting cakes had a dense crumb that was tasty but less light and fluffy than cakes from the Neff or the Panasonic NN-CS894S with steam. One of the cakes on the top shelf collapsed, but this was only because it wasn’t in a suitable tin. 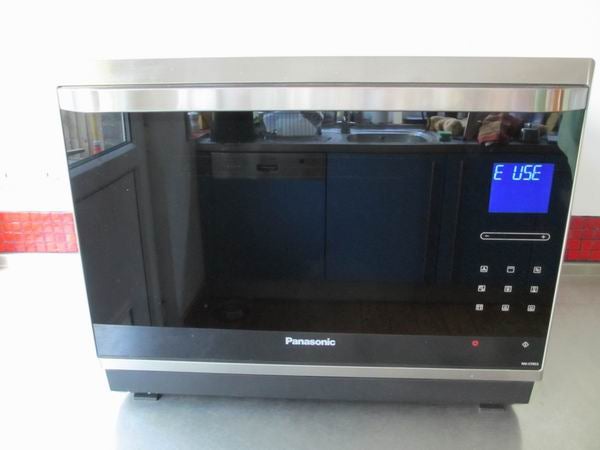 Should I buy the Panasonic NN-CF853W?

Maybe. It’s a very well featured combination microwave, oven and grill that will come in handy if you’re perennially short of oven space and would appreciate a couple of extra shelves. And the large capacity and combination cooking programs make it a good model for a family.

But if you’re going whole hog we’d be tempted to spend a bit more and get the Panasonic NN-CS894S with all mod cons, including steam cooking and temperatures as low as 40°C for proving bread. Or consider the Sage the Quick Touch if you want a top-notch microwave without the combi functions.

The Panasonic NN-CF853W is an impressive premium combi oven that wants to do your existing oven out of a job.