Back in March last year I reviewed the then-new Panasonic Lumix DMC-TZ2. It was one of a pair of models being promoted by Panasonic as the ideal travel cameras, tough and versatile with 28-280mm-equivalent 10x zoom lenses. The TZ2 is a six-megapixel model, and I assumed that it would be more popular than its more expensive sibling, the 7.2-megapixel TZ3, so beset as usual by too many cameras and not enough time, I neglected to review that model. It turns out I was wrong though; the TZ3 has been much more popular than the TZ2, and I’ve had a number of people ask me to review it, so nearly a year late and probably just in time for it to be replaced by the TZ5, here at long last is my review of the Panasonic TZ3. 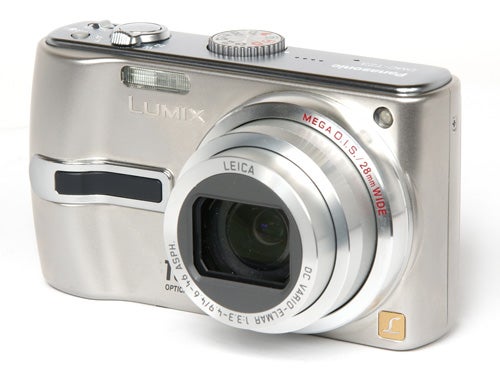 When it was launched, the TZ3 was in the vanguard of what is now becoming a whole new sector of the digital camera market, the high-zoom compact. Unfortunately it wasn’t the first one to find that particular niche though, since it is already occupied by the people who invented it; Ricoh. Whenever somebody emails me asking about the TZ3, it is nearly always because they are trying to decide between this camera and the excellent Ricoh Caplio R7, and it’s easy to see why. Both cameras have 7MP sensors, both offer wide-angle lenses with longer zoom ranges and image stabilisation, and both have scored high marks in most objective reviews. However there is a big difference in pricing. The TZ3 is currently selling for around £230, which is pretty expensive compared to the £160 currently being asked for the Ricoh R7. 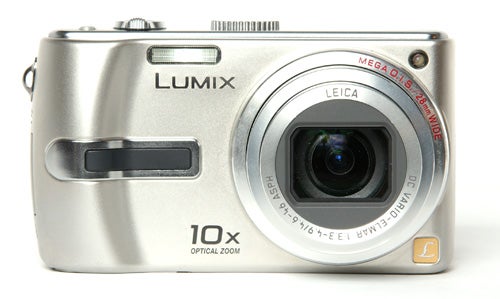 As with the almost identical TZ2, the initial impression of the TZ3 is very positive. Measuring approximately 105.0 x 59.2 x 36.7 mm it is quite a large camera by modern compact standards, and is very solidly made, as befits a camera designed for travel. It weighs a substantial 257g with battery and card in place, so while it will fit into a larger pocket you’ll certainly know you’re carrying it. This is the sort of camera belt pouches were invented for. The large size, the shaped handgrip and the thumbgrip on the rear make it a very comfortable camera to hold. The controls are sensibly arranged for easy one-handed operation, with the mode dial, power switch and shutter button with its rotary-bezel zoom control all being positioned on the top plate. This means that despite the large three-inch 230k LCD monitor there is plenty of room on the back for your thumb. My only criticisms of the design are that the D-pad and accompanying buttons are rather small, and the silver-on-silver labelling is difficult to make out. Also, I found that the main shooting mode dial, which stands out on the top plate, is quite easy to jog especially when taking the camera out of your pocket or bag. Several times I went to take a shot only to find that the camera was in playback or movie mode.

The TZ3 is designed as a snapshot camera, and its features reflect this. It has several automatic shooting modes, offering different levels of user input, but no real manual options. The primary shooting mode is program auto, with a quick function menu that provides control over drive mode, white balance, ISO setting, aspect ratio, image size and compression quality. The second mode is the slightly simpler Intelligent ISO mode, in which an upper limit for the ISO setting can be selected, but the actual setting is chosen automatically by the metering system. The other main shooting mode is the simple mode, where the function menu is disabled and the main menu is cut down to only four items. As well as this the TZ3 has two scene mode options; there are 21 scene programs to choose from, and a different one can be assigned to each both settings, so it is possible to switch between two scene programs quickly. 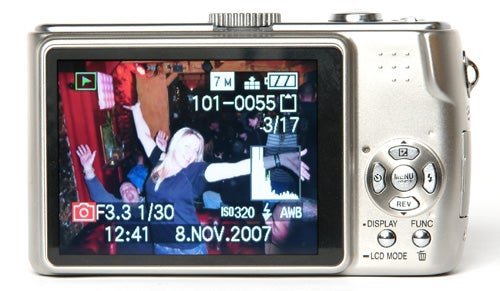 The main feature is of course the big zoom lens. Like most of Panasonic’s premium cameras, the TZ3 bears the Leica brand name on its optics, and as noted previously this doesn’t mean that the lens is made by Leica. It’s made by Panasonic, in a Panasonic factory, to a design approved by Leica. They were right to approve it though, because it is superb. With a maximum aperture of f/3.3-f/4.9 it’s not the fastest lens on the block, but it makes up for it with outstanding optical quality and usability. The zoom action is very smooth, and is continuous rather than stepped as is more usual. The rotary bezel control is also quite responsive, so it is possible to accurately frame and compose photos. 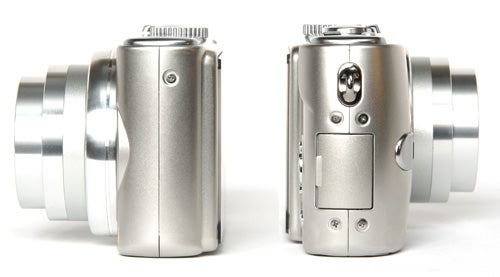 The TZ3 has a couple of features designed for the traveller. The most useful is the ability to set world time zones, but then most cameras have this feature. The other is a Travel Time setting, in which you enter your departure and return dates, and the camera helpfully tells you how many days until departure, and once you’re on holiday it tells you how many days until you return. I suppose it might be useful if you’ve forgotten to take your watch with you, and the hotel you’re staying in has no clocks or calendars, but personally if I’m on holiday I don’t ”want” to be reminded that I have to come home again.

My biggest surprise with the TZ3 is its overall performance. The TZ2 was about average in this respect, and so I naturally assumed the TZ3 would be much the same, or possibly slightly slower due to larger file sizes. In fact the TZ3 is faster, and by a very large margin. Start-up time is the same at roughly two seconds, but in single-shot mode the TZ3 can take a picture roughly once every 1.2 seconds, which is over twice as fast as the TZ2. In continuous mode too it is quicker, shooting approximately two frames a second up to the capacity of the memory card. The TZ2 could only manage a shot every 1.3 seconds. The autofocus system is also very fast, focusing accurately in good light in well under a second, and not slowing much in low light. It did slow down when focusing at telephoto zoom in low light, but focusing was still accurate under these circumstances. Movie recording is also above average, with the ability to shoot 16:9 aspect ratio video at a resolution of 848 x 480 at 30fps. Battery duration is good too. Panasonic claims 270 shots on a full charge of the 1000mAh li-ion battery, and my experience with the camera tends to bear this out. 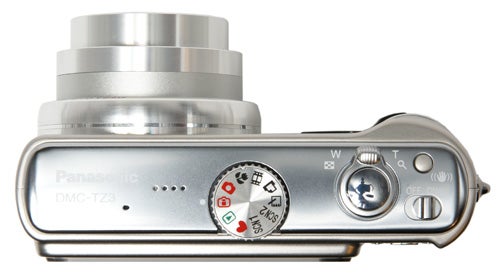 In terms of image quality too the TZ3 stands out from the crowd. As with the TZ2 the superb lens can take a lot of the credit, producing pin-sharp corner-to-corner detail with virtually zero distortion at all focal lengths. The TZ3’s 1/2.3-inch sensor has better dynamic range than most of its more powerful rivals, and combined with very accurate exposure metering it produces good shadow detail with very little highlight clipping. The TZ3 also goes some way toward repudiating Panasonic’s reputation for image noise. Like the TZ2 it is limited to a maximum of 1250 ISO in normal shooting modes (3200 is high-sensitivity mode), but even at this level colour reproduction is fairly accurate, with only a little loss of saturation. Images at 800 ISO show unmistakable signs of noise reduction, but the level of sharp detail is still higher than most other comparable cameras. All in all the TZ3 is a very capable and versatile snapshot camera that succeeds in its aim to be the perfect holiday accessory. If the new TZ4 and TZ5 are anything like as good then they will be formidable contenders in this expanding area of the market. 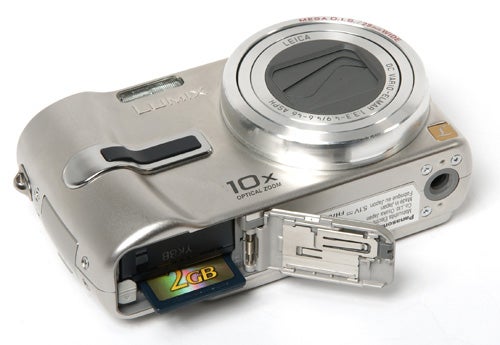 The Panasonic Lumix TZ3 is sold as the perfect travel snapshot camera, and it delivers in every respect. With solid build quality, fast performance, comfortable handling, simple operation, a massively useful zoom range all topped off with excellent picture quality, it’s no wonder that the TZ3 has been such a big hit for Panasonic. It is still an expensive camera a year after its launch, but you get a lot of camera for your money. 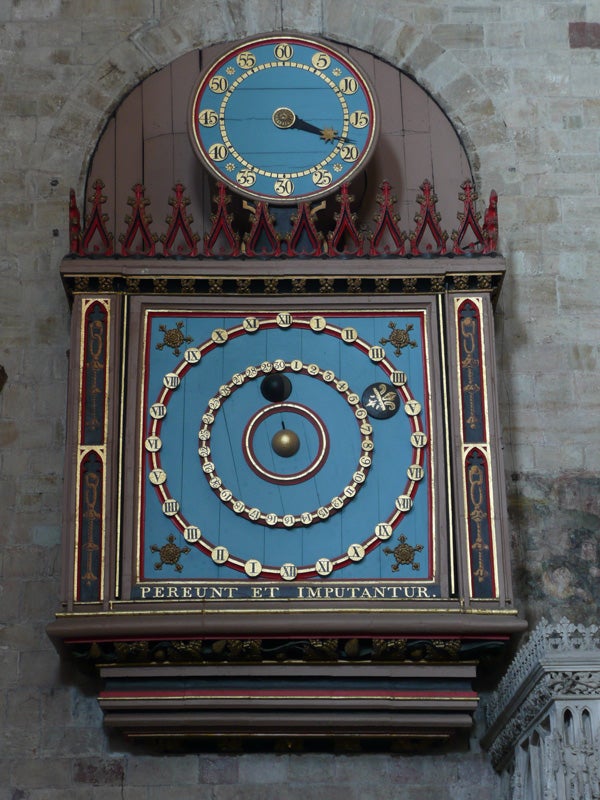 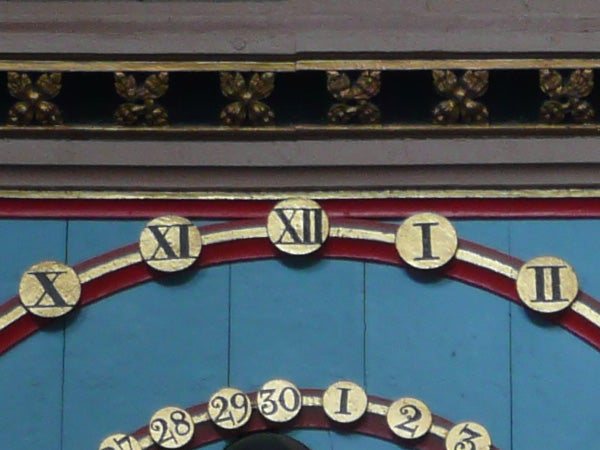 Picture quality at the lowest ISO setting is excellent. 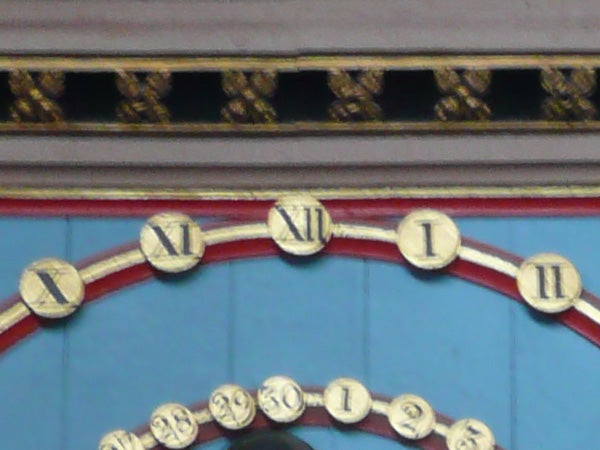 I forgot to use the 2-second self-timer for this one, so despite the tripod and the Mega OIS system I’m afraid it’s a bit shaky. No real image noise though. 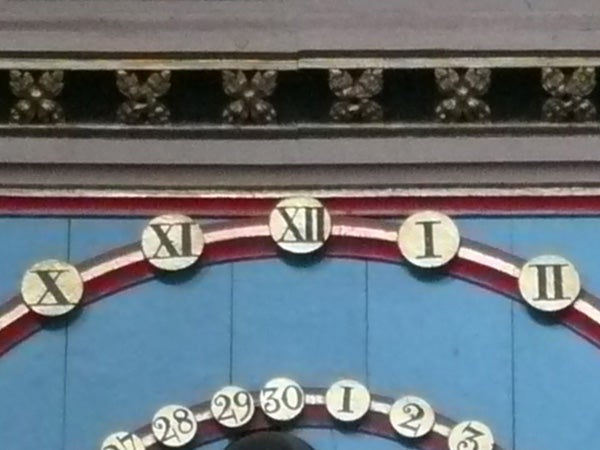 Colours are starting to fade a bit at 400 ISO, but the level of fine detail is still good. 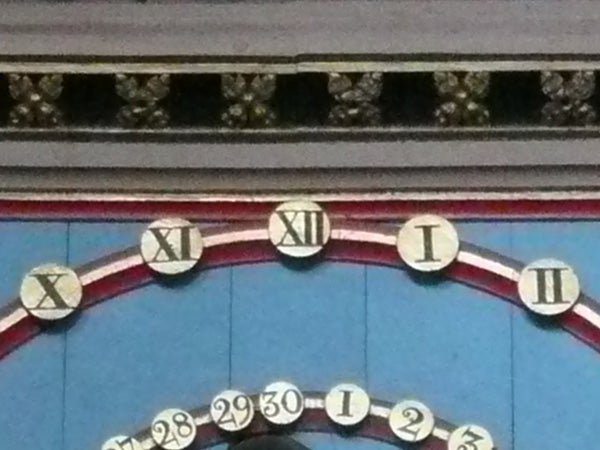 Even at 800 ISO the picture is still usable, with good colour and detail despite the slightly heavy noise reduction. 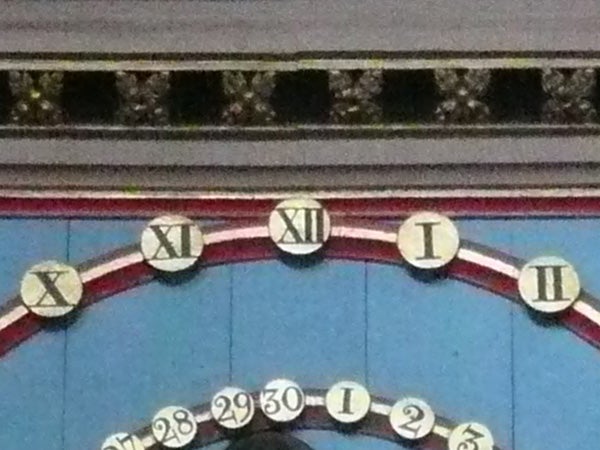 At 1250 ISO you could get away with a small print of this and it would still look ok. 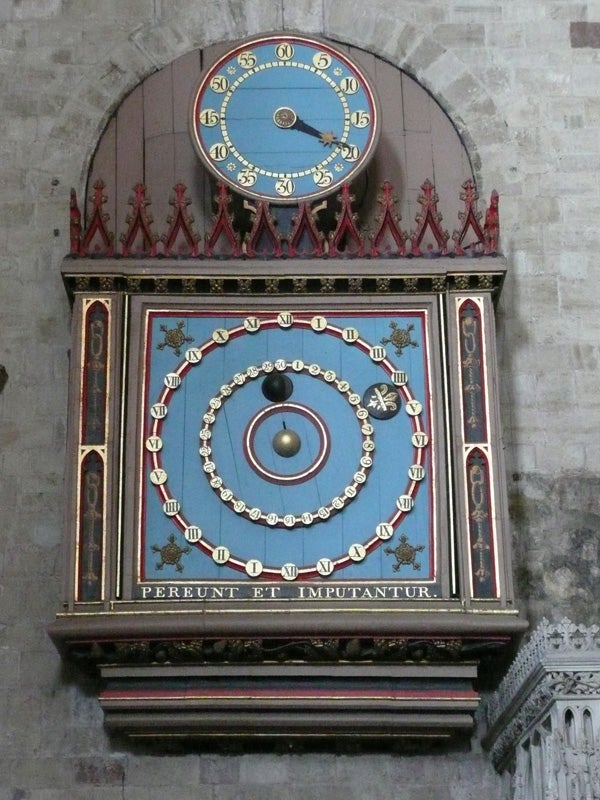 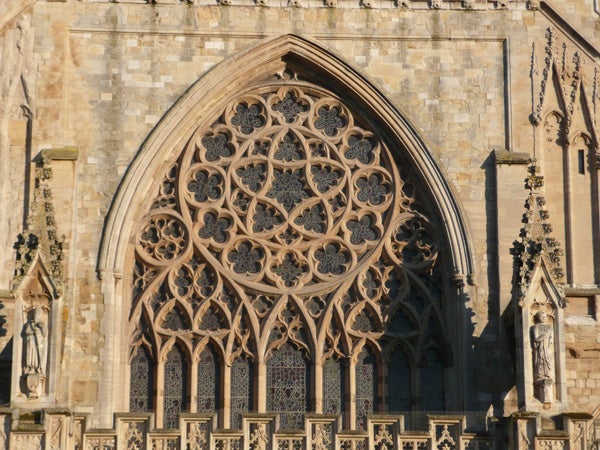 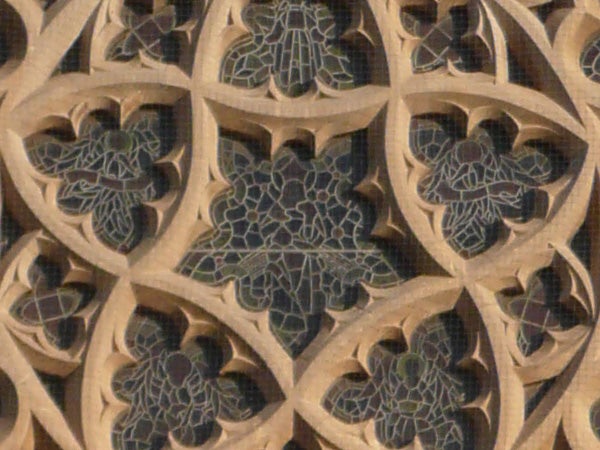 There is a hint of softness, but the overall level of detail is superb. 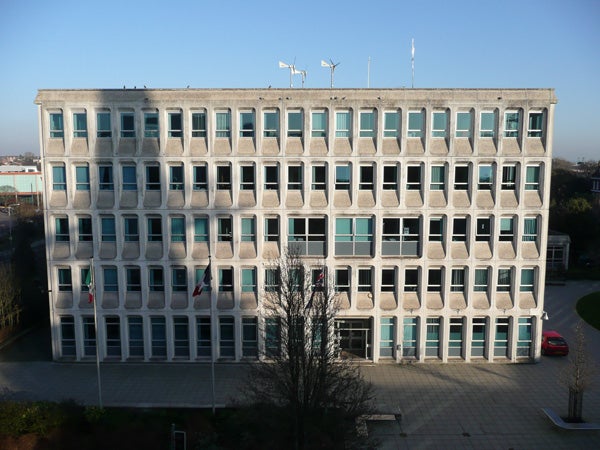 The TZ3 has a superb lens, one of the few wide-angle, long-zoom lenses with no noticeable barrel distortion at all. 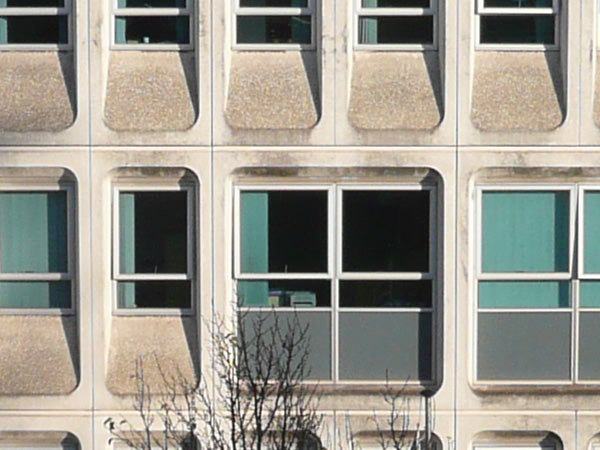 The centre of the image above, at full resolution. Again the picture is a little soft. 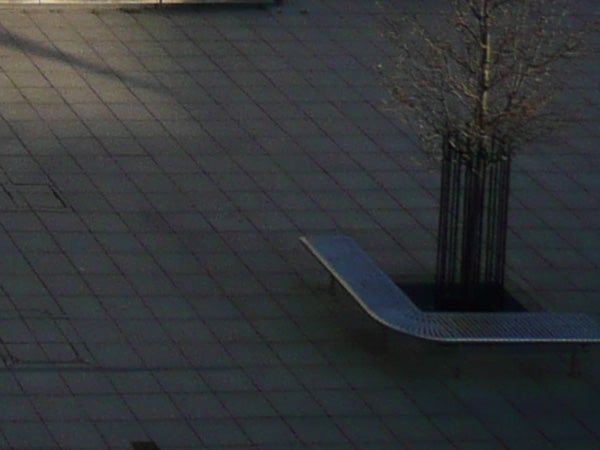 Corner sharpness is almost as good as the centre. 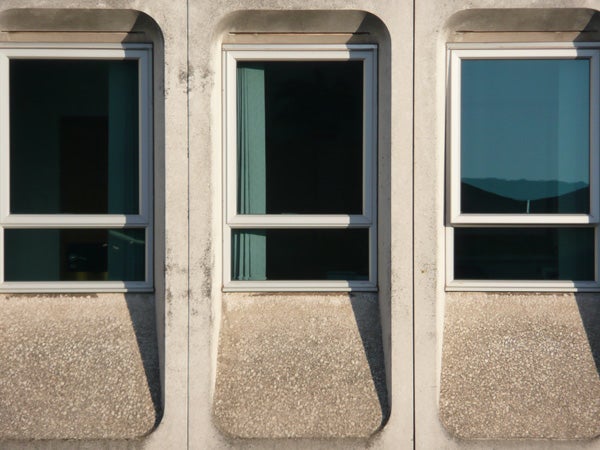 The same building, but this time zoomed in to full telephoto. There is no distortion at this end of the zoom range either. 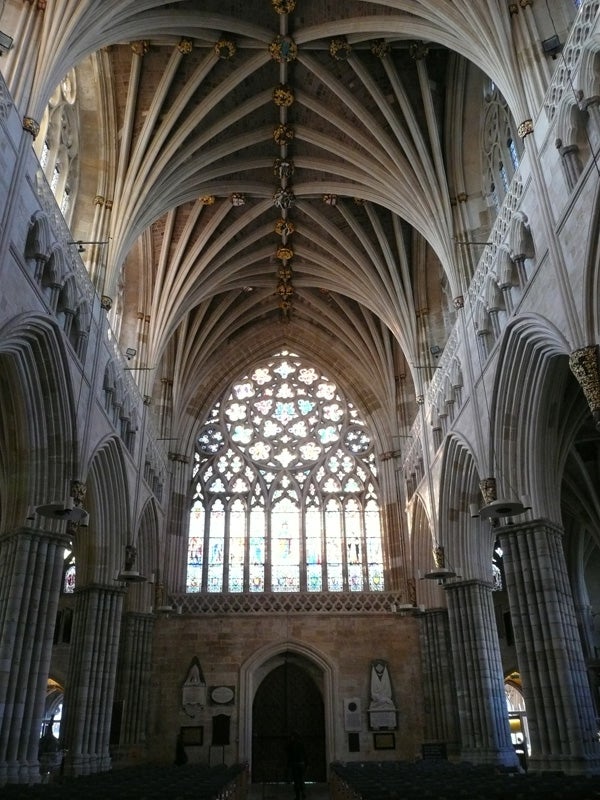 The 28mm-equivalent wide-angle end is great for large interiors or wide landscapes. 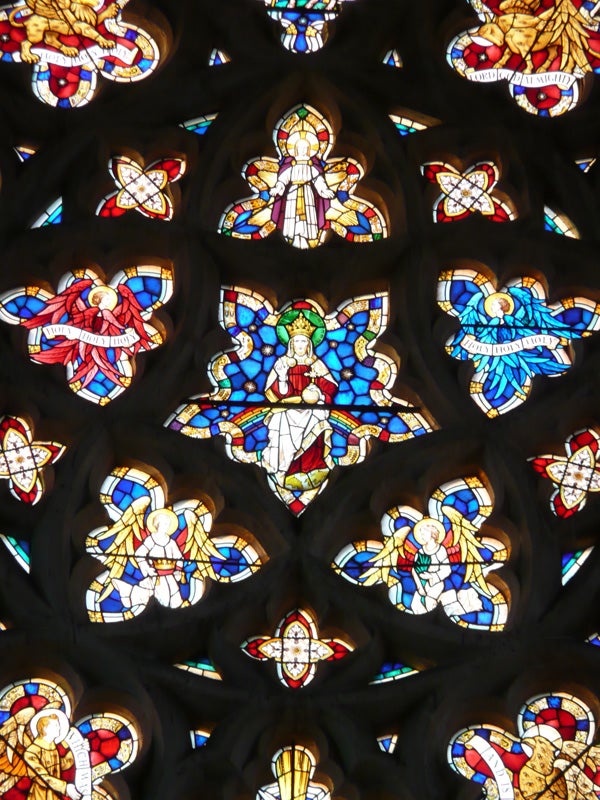 The telephoto end is equivalent to 280mm. Colour reproduction is also superb. Note that this shot was taken hand-held at 1/20th of a second. 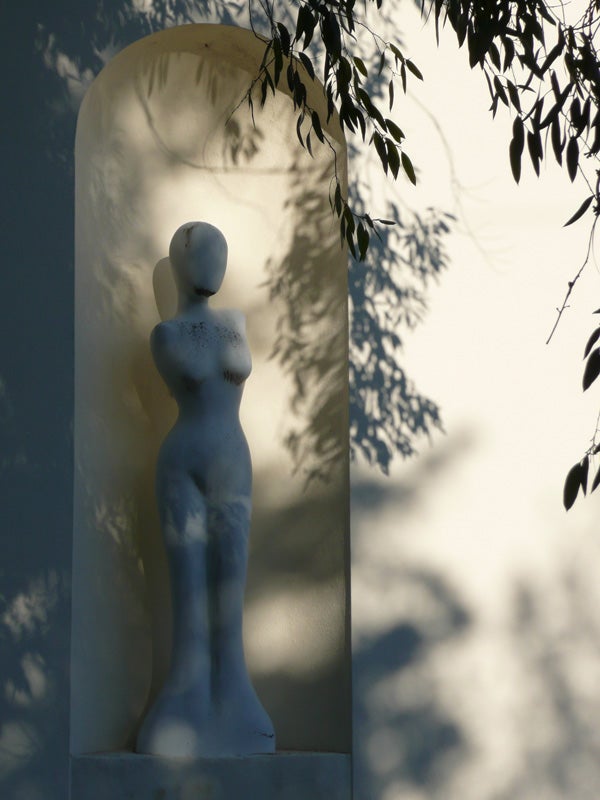 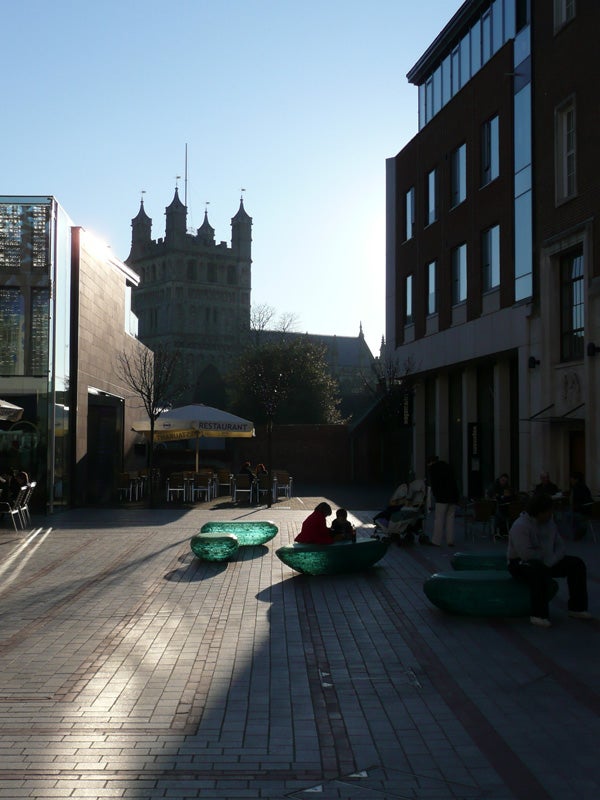 In this very high contrast shot, the TZ3 has managed to retain plenty of shadow detail without burning out too many of the highlights. 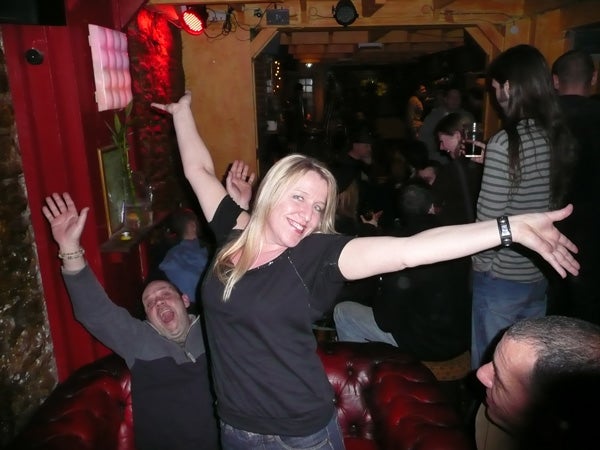 Flash coverage and metering are very good, with a useful range of about four metres.